After the trouncing my gauls received in my last Hail Caesar game, I decided it was time to reinforce them with some of the allies I had atop the lead pile. I'm aiming for a full Carthaginian army to oppose a Republican enemy, but with my interests ping ponging between periods, this Punic Wars project is going to take a few years to complete. Take a look at the color scheme I worked out for my ancient Spanish after the jump.

For the Romans I know I want to stick to the classic red as a unifying color, with linen white and earth tones and I have a general idea of what I'd like the Carthaginian side of the table to look like. Hannibal's army is made up of a range of tribes, warbands and mercenaries picked up as he marched his invasion force from Africa through Spain, France, into the Italian peninsula. With such a wide variety of soldiers, it would be easy to paint each ethnic group with a variety of colors, but I feared the overall effect would be garish. By restricting my color palette for each group I'm hoping that each mercenary unit appears distinct, making the Carthaginians look like the amalgam of numerous tribes and groups that it was. If each group used a similar rainbow color palette, I think the overall effect would be of a unified army of clowns. Definitely not what I am going for.

I've already knocked off quite a few units of Gauls (with some ancient Germans acting as stand ins). They've received the most colorful tones, wearing their hallmark plaids of blue, green, yellow and red. I intend to paint the Carthaginians in white linen with accents of black and red. I've also started some Numidians using muted earth tones: off white tunics against warm brown Berber skin tones. Before starting the Spanish I pulled together some of my favorite images to construct a color palette.

I really like Angus McBride's ancient Spanish. The warm skin tones, muted browns, chocolates and mustards stood out to me because of their tight monochromatic color scheme. These aren't eye popping troops, but will make the colorful Gauls and high contrast Carthos stand out even more by providing a muted color counterbalance. 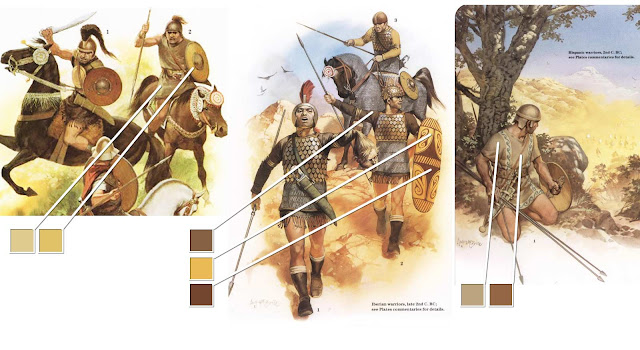 I selected a number of representative colors from each plate to build my Spanish color scheme. 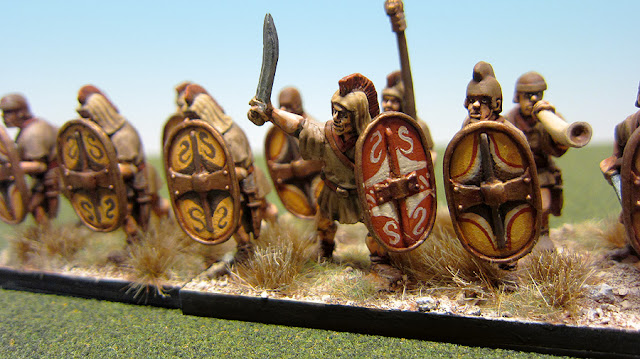 I really like the solid, detailed sculpts of Crusader Miniatures. These figures are armed with the iconic Spanish falcata sword and scutari shields. Hannibal's Spanish mercenaries served him as solid heavy infantry, and the rows of similar poses, brutal swords and large shields should provide a nice mirror of their Roman heavy infantry opponents.


The Crusader sculpts painted up quickly and easily. I hand painted the shields with a common mustard yellow base copied from the Angus McBride plate, but modified for the cramped space of the Crusader shield with boss. I really enjoyed painting these ancient Iberians up. I'm already planning on picking up some more packs for a second unit, and maybe a few Celtiberians too. And some cavalry. Heck, maybe I should just do a Spanish army instead of a Carthaginian one.