It looks like the Reaper Bones kickstarter is making progress. I just took a look at this video update of all of the completed figures available in the basic Vampire level package... 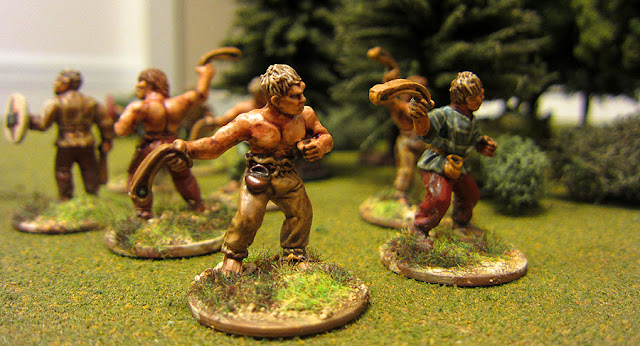 . Find out how teaching two wargaming newbs the art of ancient warfare went after the jump. 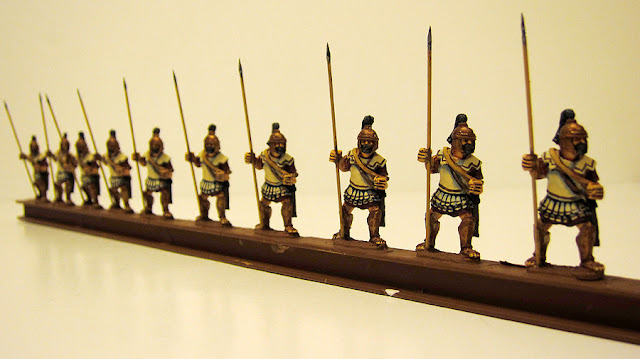 This big block of 32 Carthaginian spearmen are going to take quite a while to finish, but I figured I could post a progress update. A few more progress pics after the jump.

Wow! I didn't even know these were on the horizon! Agema Miniatures will be releasing a set of 16 plastic Republican Roman velites at Salute this year. Nice!

Check these masters out. Look at the hand holding the raised javelin. THAT'S how a hand should look. So much better than the cupped flipper hands you see on so many plastic sets that hold separate weapons.

It looks like they are including wolfskin head pieces too. I love the flowing look of the pelt, something you can't do in single casting metal.

"My Way", WWII from the Korean Point of View the other week when it popped up on Netflix streaming. Like all wargamers I'm a sucker for war movies, and I'm more than happy to branch out to non-English movies. "Downfall"

is fantastic, and Kurosawa's

are classics, but "My Way" was the first Korean historical piece I'd seen. My thoughts after the jump.

"All right!" I thought to myself, "Time to get cracking on another unit for Hail Caesar." I went elbow deep into my lead pile and emerged with a handful of Crusader Miniatures "Libyan Infantry". A lot of Libyan Infantry. No matter, I've got my shield transfers... 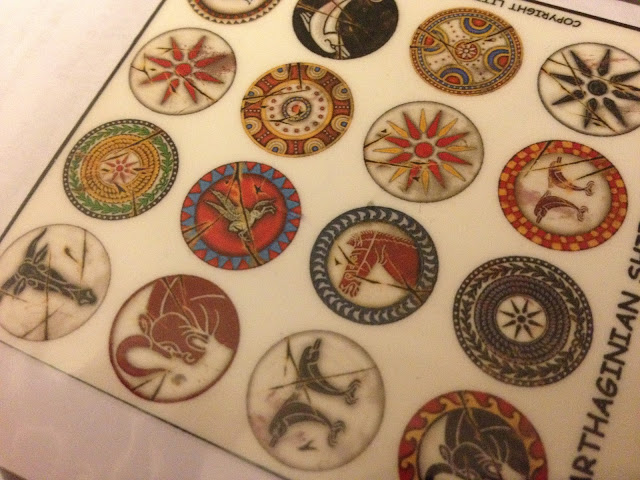 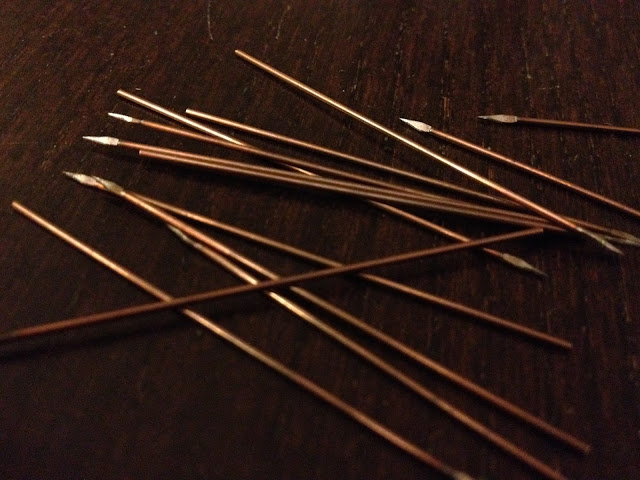 and I've got over 30 Libyans prepped and ready for priming. 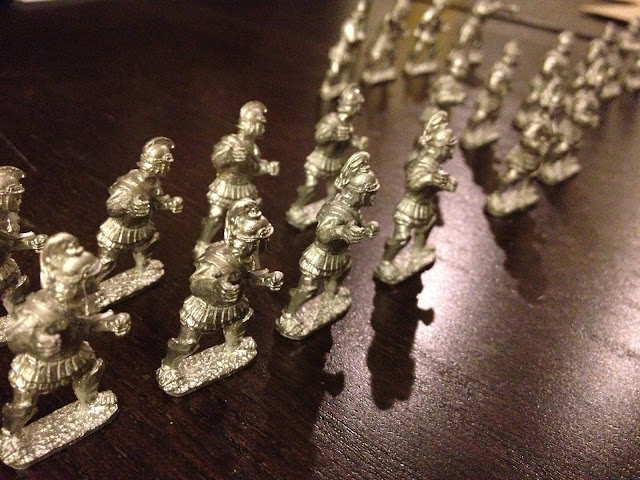 I started dividing them into like poses to make assembly line painting easier, when I stumbled across an abnormality. One of the four packs of infantry was wearing mail rather than linothorax. Now, I bought these figures two years ago, and I'm sure I had a plan but I'm mystified as too what that was. Was using a few Libyans in chain part of that plan? Did I order them by accident? Was I going to use the figures in chain as part of a command stand and use the remaining linothorax figures for a pike block of 28? Didn't the Carthaginians pick up their chain armor from the Romans? If so, I suppose I could mix them together to represent a unit just beginning to scavenge from their Italian adversaries.

I really wish I could go back and ask myself just what I was thinking.

I've seen color WWII photos and films before, but I still find them rare enough to be novelties. A set of German propaganda pics popped up on Reddit. I found them interesting and thought you might too.


In researching German uniforms I was aware that the Hollywood gray was much lighter than what the Heer actually wore, being darker and greener like the dirty faced fellow below: But check out the uniforms on this anti-tank crew. Even taking into account the altered hues in this early color film, their uniforms are nearly black. Is that a "trick of the light", or did the uneven production quality of German textile mills produce such sinister looking uniforms? 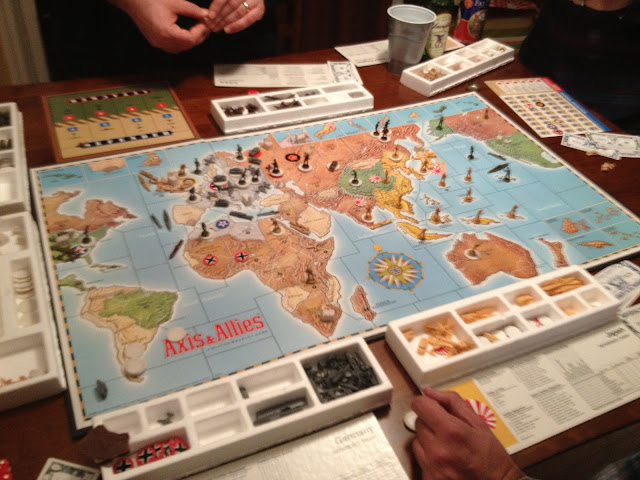 Games were a big part of college for me. With hours to fill, often snowed in or without transportation off campus, and before the internet was anything more than some ASCII interfaces and screeching modems we spent a lot of time after class dealing cards and rolling dice. When I got to school I found a deeply houseruled local version of "Spades" was the lingua franca across campus. Everyone I met at school either played or quickly learned just to be able to fit in. A few months later another card game showed up in our dorm, but to a crowd that was already accustomed to playing cards late into the night, "Magic: The Gathering" was not alien, just novel. Nobody had heard of it, but "flat crack" spread like a wildfire across my dorm, all before the stigma of Magic players being a bunch of neckbeards and cat piss men had laid hold of CCGs. Everyone I knew played: the brogrammers, the former marine, the coke dealer, the usual assortment of geeks and nerds, and my roommate the Insomniac.

Eventually we all got burned out on Magic after sinking to much money into preorders of an awful expansion. Packing away our cards we looked to new diversions. I veered off towards the geekier side of RPGs and Battletech, while my insomniac roommate pulled some of his old boardgames from storage, the most popular proving to be "Axis & Allies

". It's a classic, and I'm sure you've played, but briefly it was one of the big box games released by Milton Bradley during the 80s allowing up to five players to play out World War II at a grand strategic level. It's fairly simple compared to the hex and chit or block wargames but to college kids who didn't even know such things existed A&A was a titan that frightened off lesser players by the sheer size and scope of the rules, the huge board and the thousands upon thousands of tiny plastic men, tanks, planes and ships. We played it a lot, but after graduating real life responsibilities gradually encroached, curtailing our ability to get five people together and play massive 5 hour long boardgames. I still stay in touch with the Insomniac, who's been trying to schedule another Axis game for a few months in vain, but it was his wife who managed to rope enough of us together to play this year on New Year's day. What a gal!

We drew straws and I wound up with Germany, the one nation I had never played in Axis. I faced off against frequent opponent Mike in Russia. Scrambling for a plan, I attacked too cautiously in the first round, perhaps the worst mistake you can make with Germany during the early blitzkrieg years. Oops! I managed to recover and threw the bulk of my strength into an attack on Karelia, seizing it and leaving the Russians bloodied and falling back to protect Moscow. In Africa, my panzers routed the brits and were poised for an attack into Syria. In the east, the Japanese had a field day, destroying the U.S Pacific fleet and securing the ocean for themselves before running rampant across Asia. Of course, I had to take a pic of our victories which only seemed to rub salt in the Allies wounds.


My fortunes began to reverse over the next few turns when the Brits dropped an industrial complex in South Africa, the Russian transport I had failed to knock out dropped a tank off in west africa, and the U.S. turned her entire attention to building a European invasion force. I continued to attack, but quickly the Allies began landing multiple amphibious assaults into France. I struggled to hold on as the Japanese army overran Asia and began to mass tanks just south of Moscow, but after the "Battle of the North Sea" (I sent four fighters to take out six, virtually unguarded transports. I knocked out one, but all of my fighters were shot down by TRANSPORTS), it was clear Germany's offensive was done. The 6th Army could only watch in horror as the Allies overran the depleted rear guard in Berlin. As part of Germany's reparations, they were forced to take a photo of their defeat. Sadness.


Still, what a fun game. I'm a little wary of playing these large strategic WWII games anymore out of fear of simply seeing history repeat itself. Luckily in this play through things went pretty bonkers. Russians in Africa, Japanese threatening the Middle East, the Pacific ceded to the Rising Sun. It's nice when a game I've played dozens of times with the same guys can still offer a surprise. Hope your New Year was as full of gaming shenanigans too!