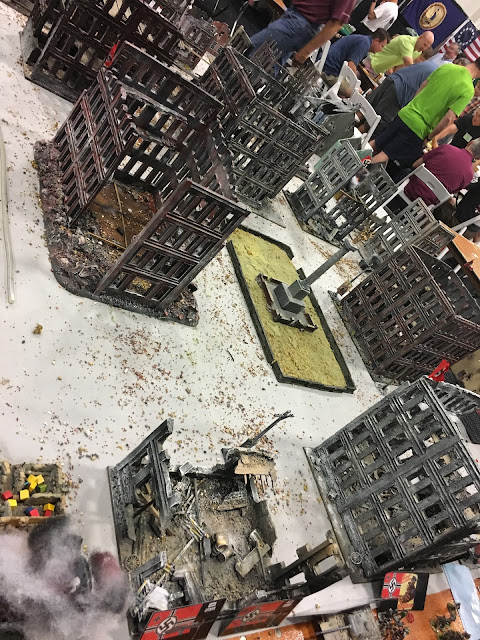 Sometimes you join a participation wargame and its not quite what you'd hope for. Tons of downtime, unclear goals and rules, fiddly minutia that leaves you feeling every minute of a four hour run time.

But then there are other games that are just magic. Check out photos and a report from my Historicon experience after the jump, in which I lucked into not one but two of those killer games that leave me counting the days to the next convention.

I started the day by hitting the vendor hall. I had a shopping list of bits and pieces I needed to pick up, and my gaming buddy Chris (a Blood and Plunder fanatic) had a number of items he requested I bring back to him. Unable to attend the HGMS cons due to work obligations, he asked me to take some photos of the vendor hall as well to get a better sense of what it was like. Since I shared with him, I figure it would be rude not to share with you as well. 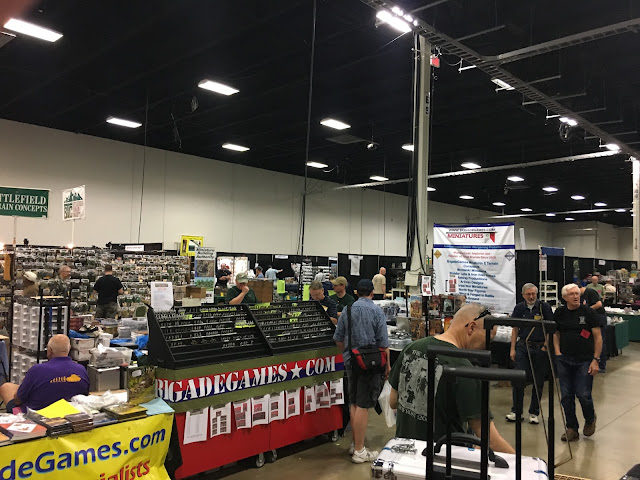 The vendor hall had the usual array of sellers in attendance peddling figures, terrain, games, and peripheral wares associated with wargaming. I chatted with a rep from Shapeways and got some ideas for future projects, spent too much money on things not on my shopping list, and ran into a line of figures I was surprised to see. 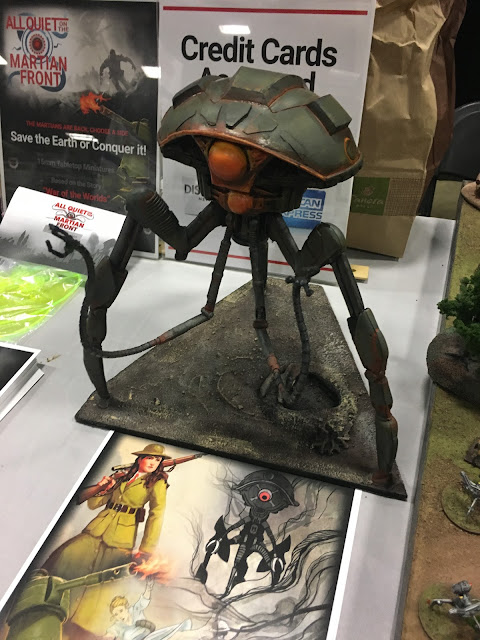 The Martians have returned! I picked up some starter boxes during the initial launch a few years ago, but after Architects of War folded I resigned myself to eBaying the few figures I had. Luckily I'm pretty lazy and never got around to it, giving All Quiet on the Martian Front a chance to be acquired by another company and go back into production. I might finally need to get my tripods painted and on the table. 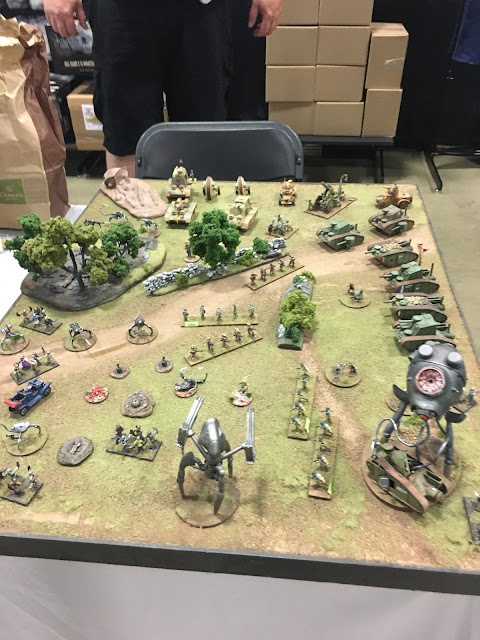 I had to stop by the Firelock Games booth to check out the new wooden corvette, and to try out their demo table. 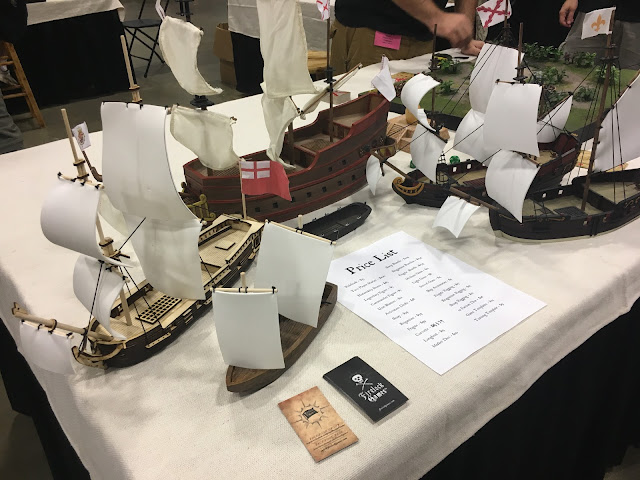 Chris Tunez gave my son a run down of the rules in which I learned we'd been playing a number of rules just slightly wrong. Oops! Glad I was able to clear up some misconceptions though! 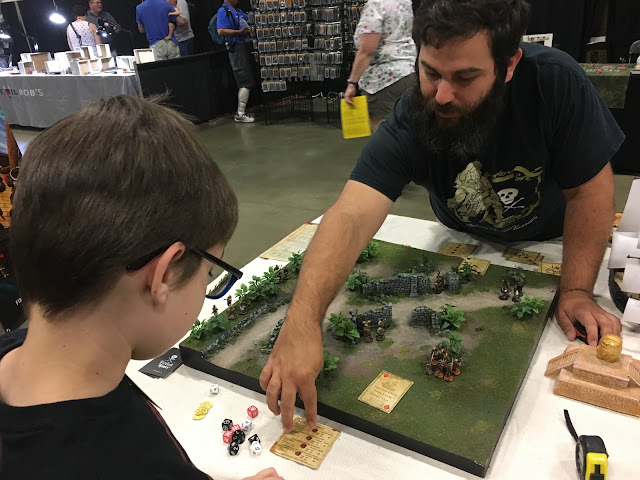 Despite only being at the con for about a day, I felt like I was able to play a lot. I got to try a number of demos in the vendor hall (great for getting a taste of different rules systems), scoped out a number of great looking set ups in the main hall, and joined a Shatterlands game (a pretty unique individual skirmish game with randomized character profile cards that include lottery-style scratch of damage trackers!) 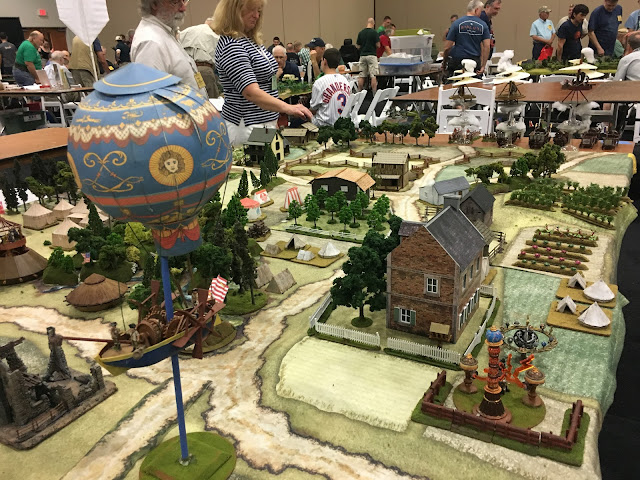 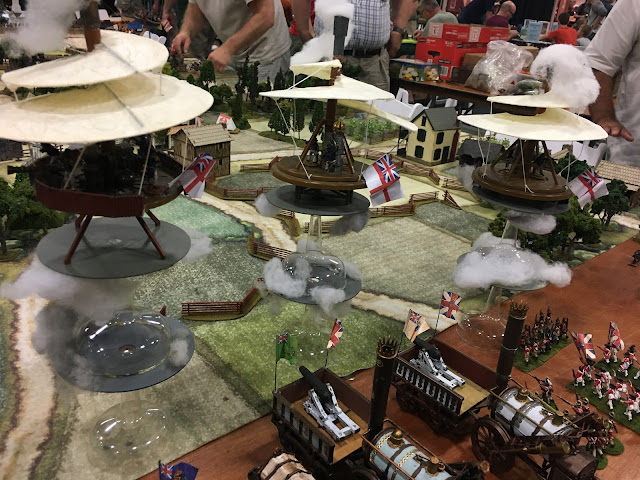 I got a closer look at the awesome pirate board set up. Fantastic! So many little details, clear "zones" (village, fort, mysterious river, etc.) that made it feel like a real place.

I signed up for a spot in Miles Reidy's WW2 vs Egyptian Fantasy in a pulp three way battle that did not disappoint.

My son and I ran a Fallschirmjäger team with armored car support. Axis and Allies set up on opposite ends of a 16 foot board, our objective to capture Professor Akbar (who took shelter in the catacombs beneath a pyramid in the center of the table)

It was an awesome game; my son and I had a blast. I consistently recommend Miles' games to friends, regardless of the genre. They are always fun.

I managed to snag a spot in Ivor Evans pulpy "Agent Carter" game, based on the exploits of the WW2 Marvel special agent and her nemesis The Red Skull.

I spoke with Ivor a bit about the game and he mentioned he hadn't quite finished up the table and we'd only be able to play on half of it this year (with plans to complete it to play the other half in a future con). He's far too modest, as this table was a joy to play on.

Ivor ran this with the Pulp Alley rules (new to me, but pretty quick to pick up and lots of little bits of strategy to them). I ran Doctor Zola, the bug eyed weird scientist from Captain America who turns into a computer in Captain America 2 (comics!). My teammate ran The Red Skull (awesome!) and we were supported by a cadre of Hydra minions.

We were opposed by Peggy Carter, Tony Stark's dad and a variety of other heroic sidekicks. Various artifacts littered the battlefield, including Captain America's shield.

It was a great game. Hydra did very well, claiming three of the artifacts by turn 6. We confidently continued to echange fire with the good guys, but two of our Hyrda goons were wounded in the battle and had to make health rolls to survive. On the last rolls of the game both of our minions bled out, dropping their artifacts and giving wins to Agent Carter and her team! Crazy, hilarious, awesome and so evocative of a pulpy Marvel flick!

We had a great time, my son is eager to sign up for Fall In, but it's a bit bittersweet with this being the last year at Fredericksburg. We are not looking forward to the Host for the next Historicon. I know the HGMS Board is in a tough spot regarding financing the conventions, but I fear the Host is only going to exacerbate the shrinking attendance rather than fix it.

For now though I'm home with sacks of goodies to keep me busy for the next few months, and lots of ideas from seeing and playing in so many inventive and thrilling games.