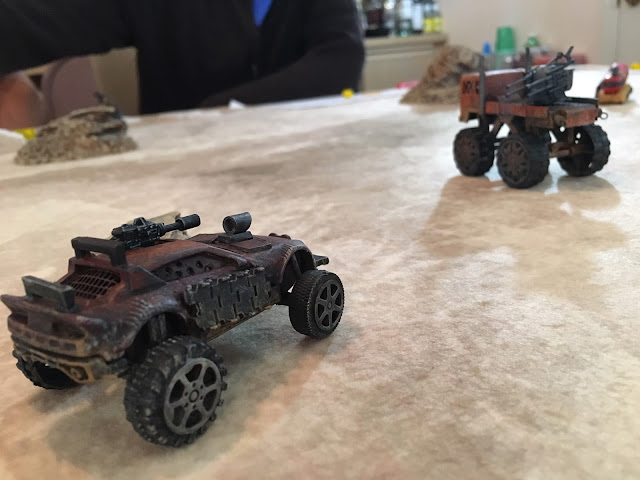 Gaslands was written for Hot Wheels / Matchbox cars, which are roughly 20mm or 1/72nd scale (although scale is a little goofy and tends to vary a bit). Using my son as cover, we stopped at the Dollar Store and raided their toy car section. I grabbed the four Hot Wheels cars they had on the peg, a few larger scale cars (for wheels), and some cheap industrial equipment (a dump truck and bulldozer). 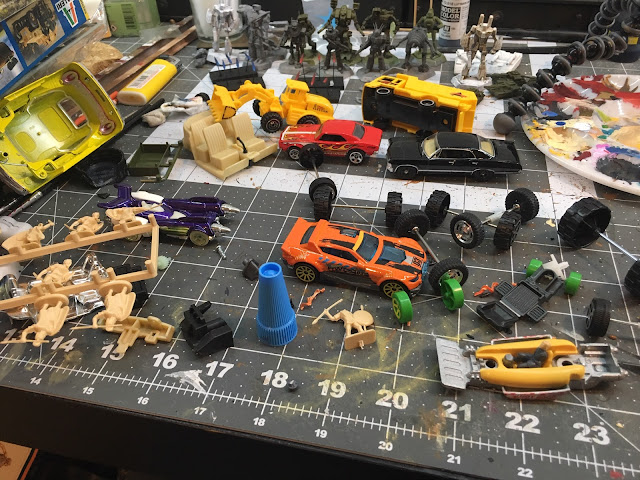 After I got home I started disassembling them and raiding my bits box. Here are some of the items I used in my builds:

In no time I had a hacked together little desert raider buggy.

With one under my belt, I decided to create a step by step tutorial for my next car. 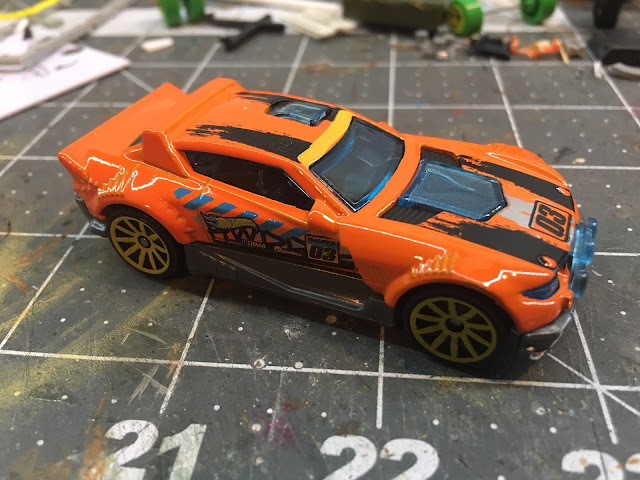 There should be two screws on the bottom of the car. Pick a drill bit slightly larger than the screw, center it and slowly drill into it. 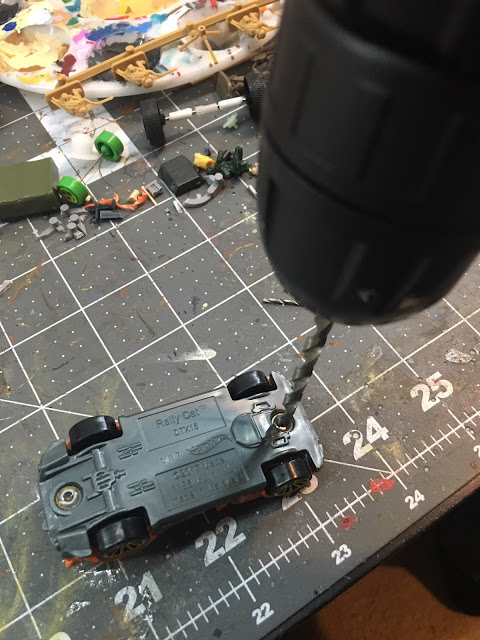 With the screws drilled out you can break the car into its component pieces. 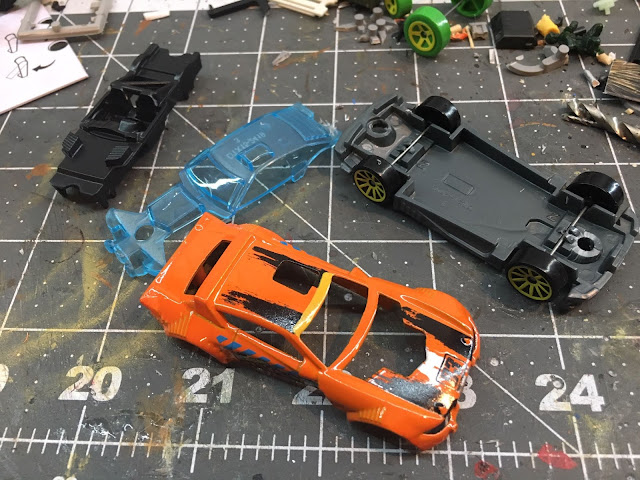 Step 4: Build the Rest of the Frickin' Car 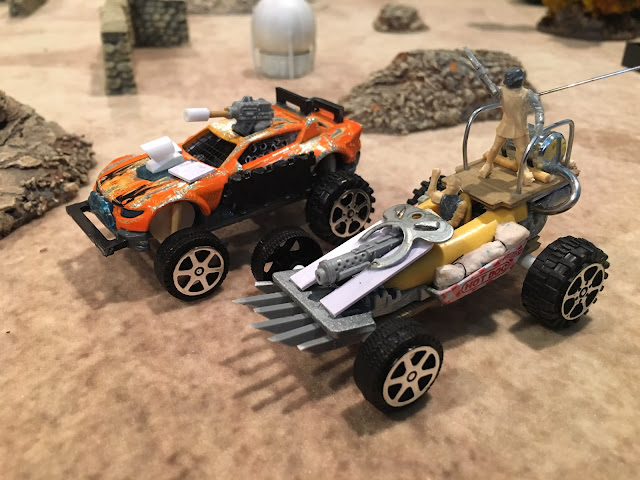 Sorry guys, I got so wrapped up in building a post-apocalyptic deathmobile that I lost track of time, space, and the fact that I was creating a tutorial. I failed to snap any more photos but I can annotate the finished product to give you an idea of what I did. 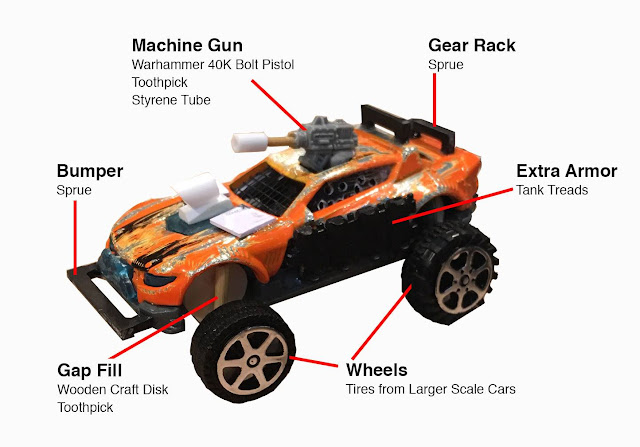 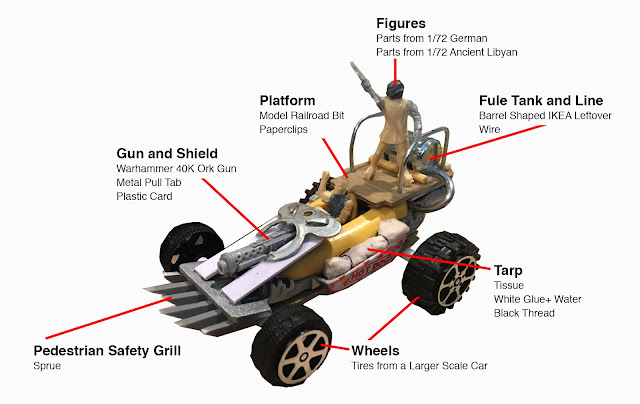 I also built a monster truck from the cheap garbage truck, huge awful tires from a large scale toy car, an anti-aircraft gun from a WWII kit, and lots of sprue, plastic and brass tube. 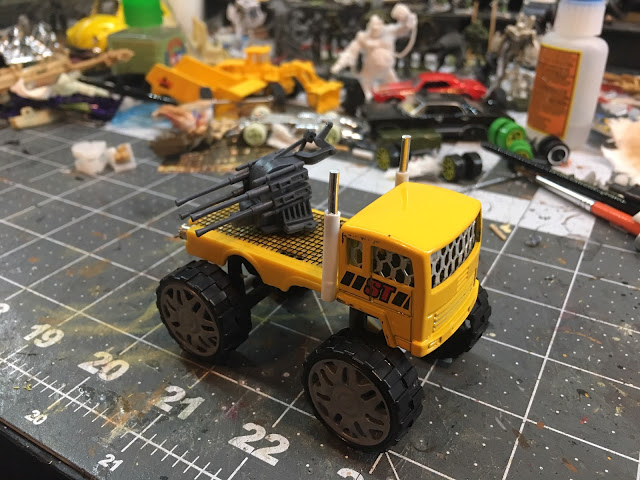 Since these are beat up, wastelands war machines, painting and weathering is pretty easy and stress free. I primed my cars with brown and my monster truck in gray. I wanted the cars to be pretty rusty, so stippled a variety of dark reds, oranges, and mustard paint over the body. To mimic corroded metal, I brushed water over the body and dropped copious amounts of salt onto the cars. 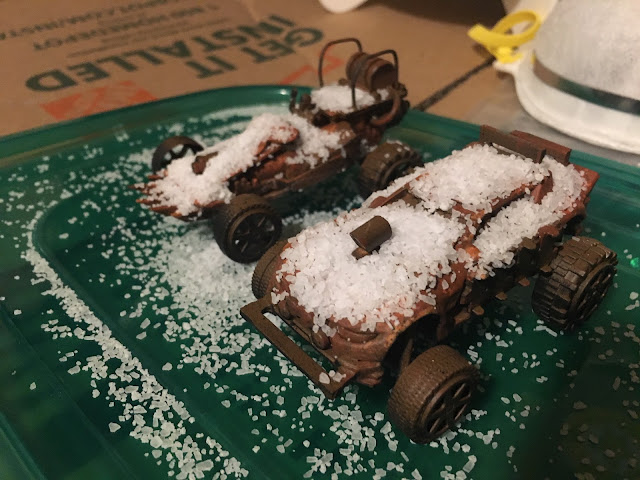 Once the salt was dry, I airbrushed the cars with their "paint" color: dark red for the rally car, gray for the open topped buggy. When the overspray was dry, I washed away the salt. Finally I drybrushed a light tan over the bottom half of each vehicle. 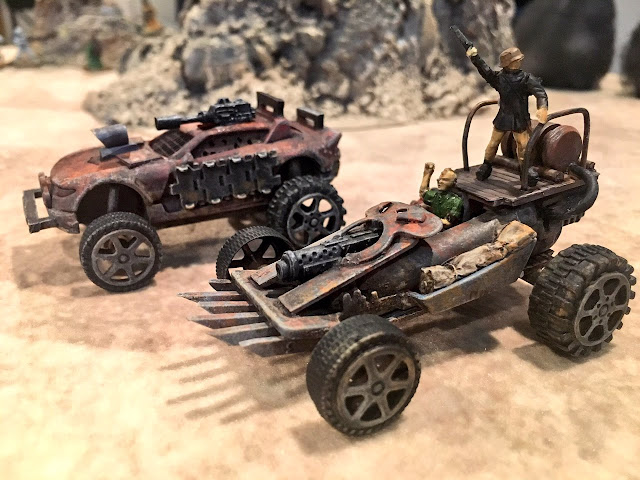 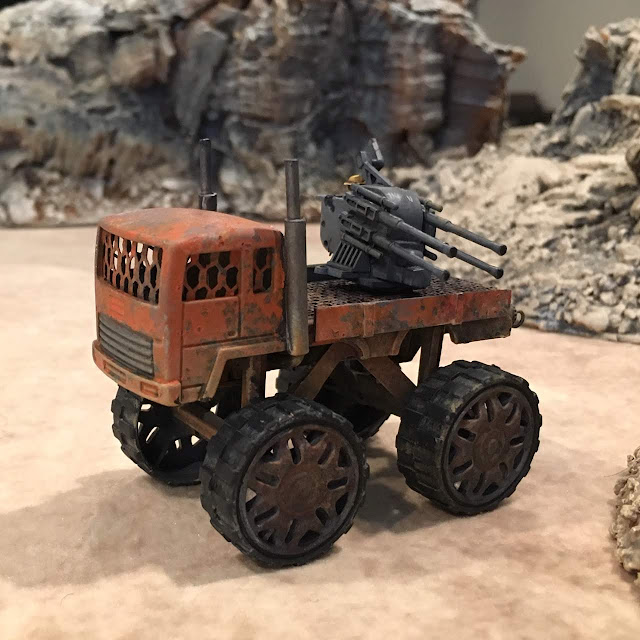 I've only played a handful of games (check them out on Scrum in Miniature), focusing on getting the rules for movement and combat down (we haven't touched Audience Votes or the scenarios yet), but Gaslands has been a lot of fun. The rules appear to be written as a reference manual, and Osprey's generic layout can be onerous when trying to puzzle through a rules question, but once you get the hang of it the game itself is smooth, fast and intuitive.


Each player only needs one or two cars, which makes this the easiest wargame to get into that I'm aware of. Terrain is also uncomplicated to handle since a simple ground cloth and maybe a dozen ground scatter rocks, debris or wrecks would be ideal for your first few games.


The rules are inexpensive, and while you can print out and make templates yourself (it took me about an hour), I'd suggest buying some precut acrylic ones or 3D printing them if that's an option for you. You'll also need some special "shift" dice. You can use regular d6s, but again having dice with printed labels, custom purchased, or 3D printed is probably ideal.


With the holidays approaching I think Gaslands would be an ideal one-off to run with non-gamer guests, kids and hardcore die addicts alike. I'm looking forward to our next games and hoping to roped some of my visitors into playing over the holidays.
Posted by John at 12:26 PM