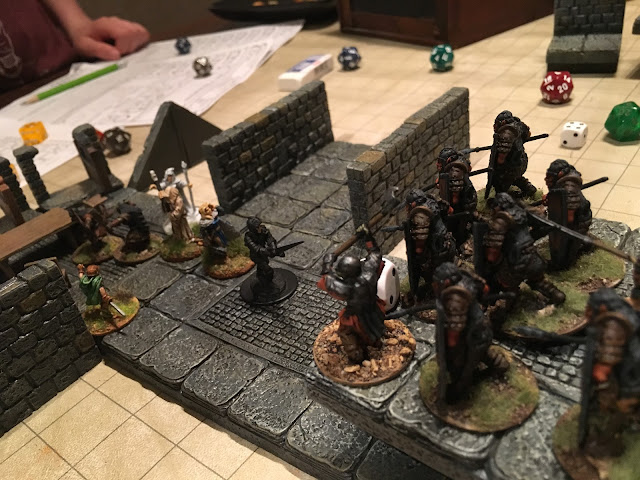 
Returning to the ravine, the mist that had obscured it on their first foray had lifted, revealing a number of cave entrances higher on the cliff walls farther into the defile. I gave the party some stock OSR advice ("Towns are safe. Roads are a bit less safe. The wilderness is really dangerous, and the further you get from the surface - deeper into a dungeon or higher into a wizard's tower for example - the deadlier the creatures you'll find"), information they filed away for later, marching their characters to the goblin cave they had entered before.

They negotiated with the goblins again, who were anxious that the hobgoblins would blame them for the party's recent attack, but promised them a healing potion in return for slaying more of the orange skinned brutes. To keep the goblins honest the party required two members of the tribe to join their expedition. The goblin leader drafted two runts - Gubbins and Milktoad - into the party's employ.

Following the tunnel they had entered earlier, the party climbed the steps towards the hobgoblin lair ("oohhh, we're going up, so I guess the monsters are going to be tougher!" my neophyte dungeon delvers realized).

Opening the door they could hear the crack of whips and the whimpering of captives. Sneaking forward they could hear hobgoblins chortling as they "tenderized the meat" for the evening's feast. The party burst in upon them, quickly dispatching the hobgoblin torturers and freeing tonight's menu: a merchant, his wife, their two caravan guards Zeke and Deke, and a captive goblin, Beerfrog. (The original module includes an orc and a gnoll here, but I wasn't quite ready to bring those factions into play yet).

The merchant, his wife and Beerfrog were in no shape for fighting and were sent to the rear, but Zeke and Deke were eager to mete out revenge for the abuse they'd suffered under the whips of the hobgoblins. Further explorations into the caves uncovered a large central hall, with a grand staircase heading up and a pair of large wooden doors, cracked open sufficiently to allow light from the outside to stream in.

The few hobgoblin guards here were slain quietly, and before the party could be discovered the halfling thief looted them (grabbing a parchment with non-human names written in hobgoblin on it) and fled. 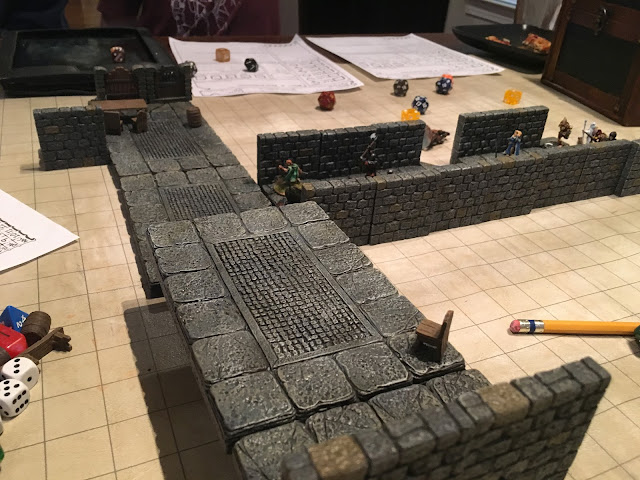 Claiming the potion in return for a new sack of hobgoblin heads, the party dropped off their goblin escorts and rescued captive and returned to town with the merchant and his entourage in tow.

The party received a reward from the merchant's guild for the liberation of one of their own. Grateful for their rescue, the merchant's wife offered the party a magic dagger in thanks. Taking the party thief aside the merchant also mentioned that he had been waylaid returning from the east bearing a stone tablet covered in the ancient runes of the long dead serpent people. "If you return to that vile place and locate the tablet among the goods the hobgoblins stole from me, I would be most appreciative."

The party reported their findings to the bailiff and formed an adventuring company, officially in the employ of the Keep as scouts. The bailiff tasked them with gathering a full report on the nature and number of the inhabitants of the Caves of Chaos, so once again the party set off into the wilds.

On this excursion they decided to locate the entrance they glimpsed from inside the central hall.  Passing both the goblin cavern and a secondary cave near the floor of the ravine, they located an eroded series of switchbacks that ascended to the great wooden doors. The party's halfling scout spied several hobgoblin guards on watch throughout the entry hall.


Using the entrance as cover the party attacked with ranged weapons. The wily hobgoblins returned fire with crossbows, but two of the humanoids darted down side tunnels to fetch reinforcements. 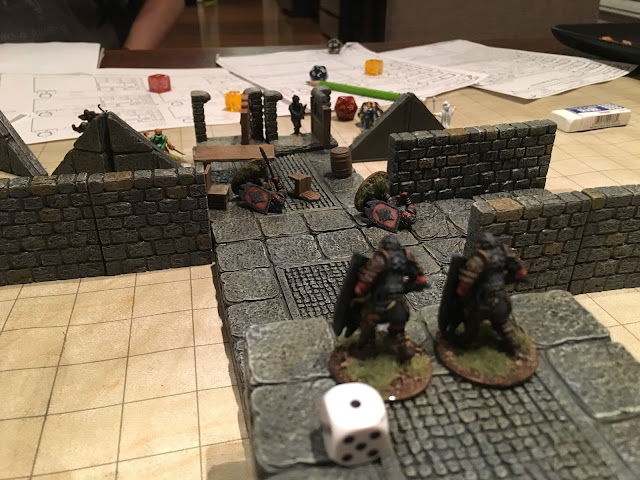 Intent on wiping out the hobgoblin cannibals, the party's fighters formed a shield wall to give the ranged attackers cover. As they pressed forward the party could hear the gathering hobgoblin host. Drums sounded in the deep, the clanking of armor and boots grew louder and soon a tide of humanoids swept down upon the party. 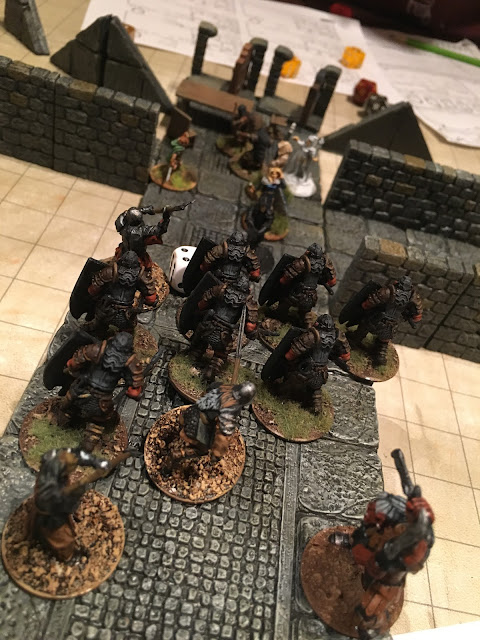 With hit points dropping rapidly and outnumbered two to one, the halfling thief tried shouting the words from the parchment she'd found earlier. "Sumali, Gureelio, Kursah, and Nardo say stop!"

This only enraged the hobgoblins more, and seeing things spiraling out of hand my son's morale broke. "Mom, we have GOT to get out of here!" The party fled, their hobgoblin enemies slamming the wooden doors behind them.

Really enjoying our trips into the dungeon, and looking forward to our next excursion!