Hi! I’m Mark, and John has graciously given me the opportunity to show off a new dungeon crawl that I’ve been working on. All of the terrain was handmade by myself, with only some of the scatter having been cobbled together from pre-made sets. Also, I’ll let you in on some of the world building ideas behind the thing.
(P.S.: We tried it out for my wife’s birthday, and everyone had a blast! I’m hoping to bring it to a local convention down the line…or something like that.)

(P.P.S.: Dungeons and Dragons trademarks are the property of Wizards of the Coast, Inc. Any use of them is for entertainment purposes only.)


My goal in all of this was to create a dungeon crawl trilogy with rules based largely on the DnD Miniatures game from the early 2000’s (3rd Edition or so). The trilogy follows two main characters through the levels, with a low-middle, middle-high, and high-epic structure. Here’s the opening crawl (pun intended) for the first adventure: 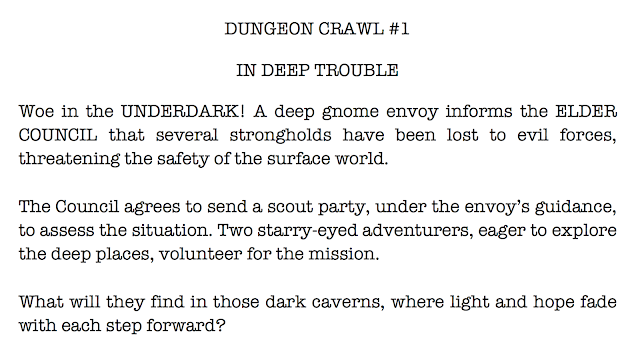 Anyhoo, the two PC characters are a dragonborn ranger (Erasmus Saurwin) and a dwarf cleric (Dras Rocklager). Here they are, flexing for the camera: 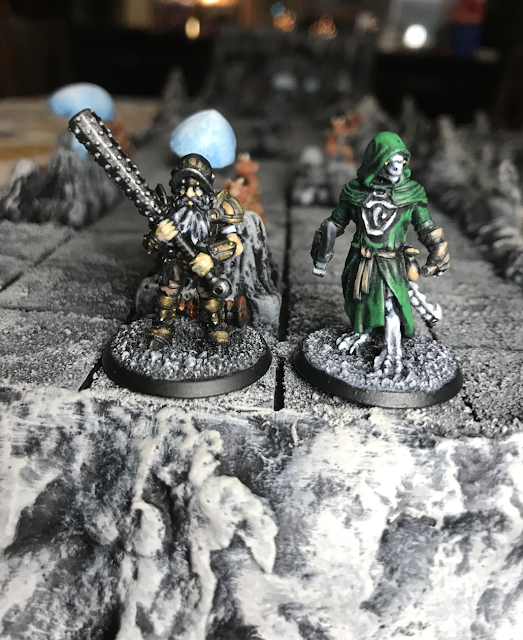 And they have stats, too! 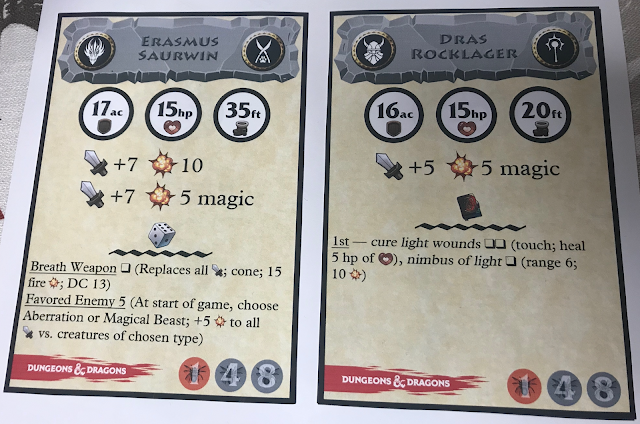 So, the start of the crawl into the Underdark finds our 1st level neophytes facing a ten-strong raiding party of vicious, bloodthirsty Kobolds. 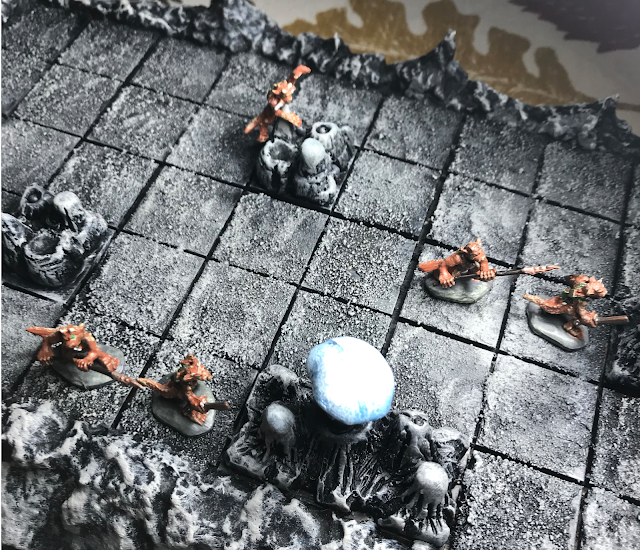 These creeps come in three types: (1) sword and boarders with slightly better defense; (2) spearmen with Melee Reach 2; and (2) assassins, who cling to rocks and get one big attack if a foolish PC walks by. PC’s get the ability to sweep attack kobolds, which limits their numerical advantage a bit. Should the kobolds be defeated, they drop the following loot: 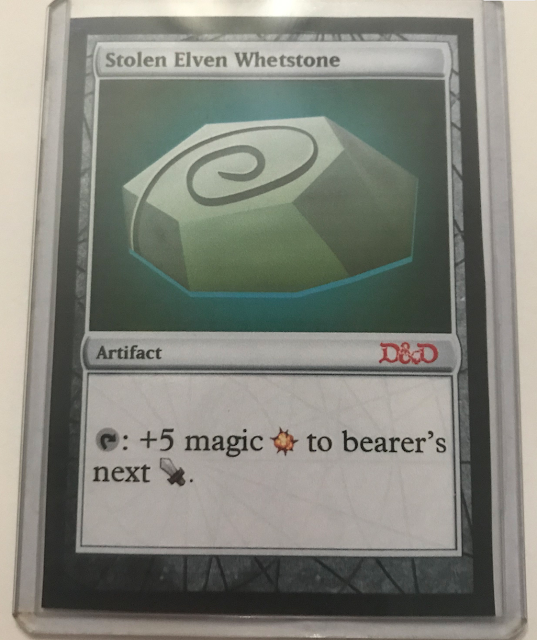 (For fans of the crunchy parts of games, tapping an artifact is a once per encounter thing.)


Chapter #2: Riddle Me This

After defeating the dragon-rats, Erasmus and Dras find a side tunnel that leads to a treasure chest (a gold pile each…score!). At the end of the tunnel, however, they hear strange snuffles: 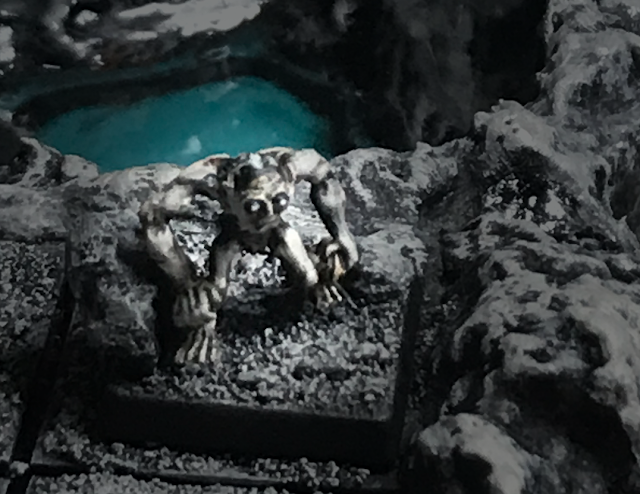 Ahhhhh! Scary. Better kill it with fire. Wait, this little guy likes games. Riddle games. Imagine that. Not. So. Fast. The party starts out with three “wipe” counters, which allow them to respawn at start of an encounter they crash and burn on. It turns out, however, that every riddle that the PC’s get wrong costs them a wipe. So, how stubborn are they? If the party guesses the riddle, or wipes three times and earns the little guy’s pity, then they get: 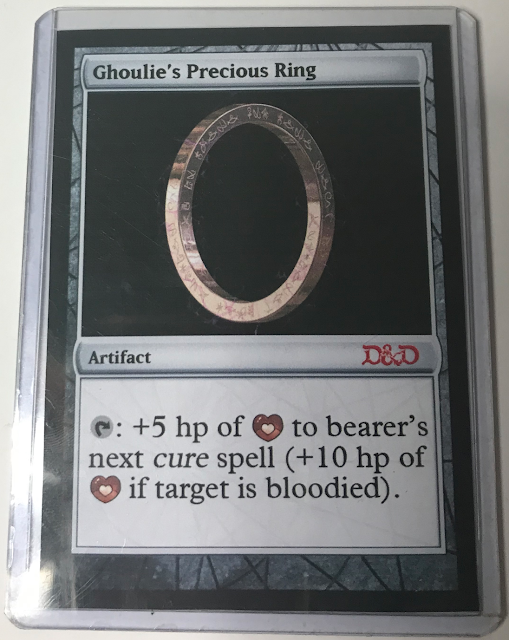 (Here’s an example riddle. Would you wipe?)

“When you have me, you feel like sharing me. But, if you do share me, you don’t have me. What am I?”

The adventurers move further down the main tunnel, until they move into a 5’ wide constriction that requires them to move single file. At the end of the tunnel is a large, icky web: 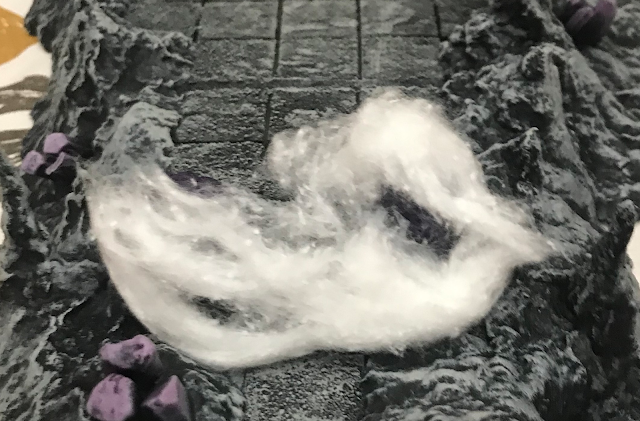 Behind the web, there are two sets of multiple, globular eyes. Pulsating shadows can be seen, as the owners of said eyes slowly feed on wrapped victims. The only hope to get at these untargetable beasts is to destroy the web. Fast…

…because, unbeknownst to players, the beasties gain hit points each round that they get to feed. #dpsrace

(But, since they spin silk, they can ensnare characters…greatly slowing their DPS roll.)

Once the web is cut/burned/smitten down, two ettercaps appear. Now, from their perspective, they’re enjoying a lovely, leisurely nuptial feast. But then these a-hole humanoids show up and require immediate slaying. 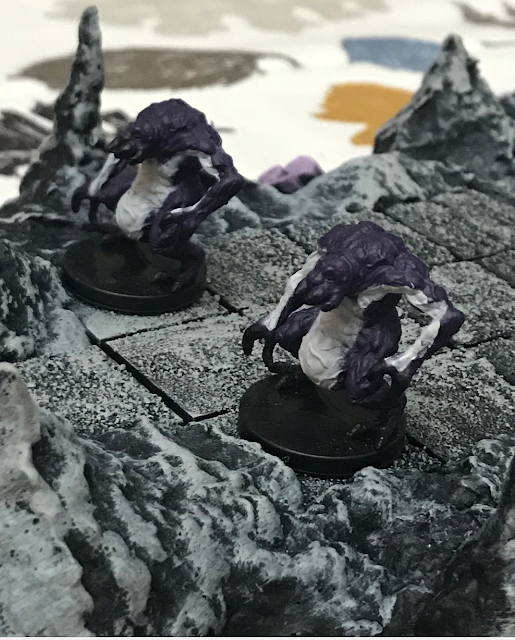 Should the PC’s be able to defeat the two arachnothropoid lovebirds, then they get to level up! 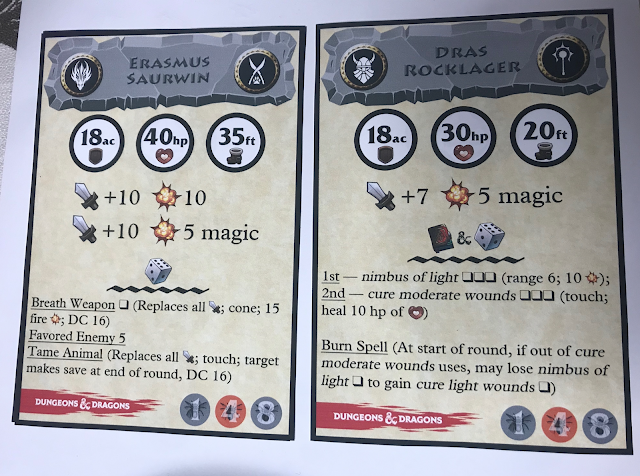 Chapter #4: To Tithe, or Not to Tithe

The cavernous hall opens up again to reveal a grand stone courtyard, signifying the entrance to a gnomish outpost. In the center of the courtyard is a statue of Segojan Earthcaller, venerated gnomish god of deep places. With his faithful badger and great mace, he peers over the party with his ruby eyes. 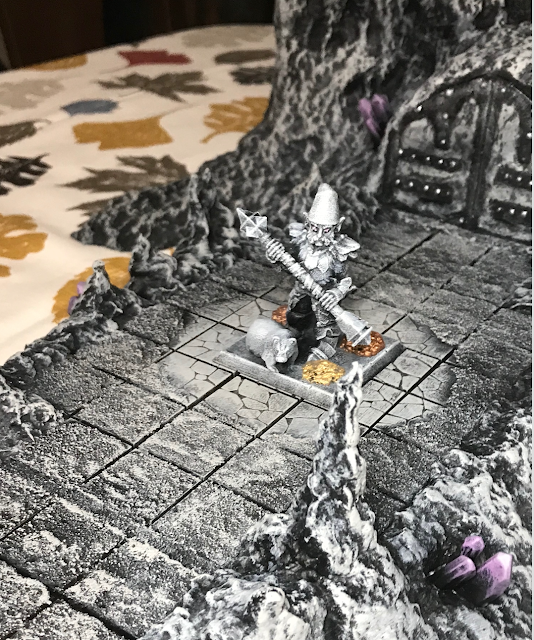 Heaped upon the statue’s base are piles of gold. Jackpot! This line of thinking will probably get the PC’s killed, as any theft of gold will cause the very large, very stone statue to animate. Ouch!

Luckily, not all players are greedy buggers. They might just sense the trap and try and open the great stone door. That. Is. Locked.

What to do, what to do? Well, luckily, each of the players started with a scroll containing a prophecy from the town’s sage. The dwarf’s looks something like this: 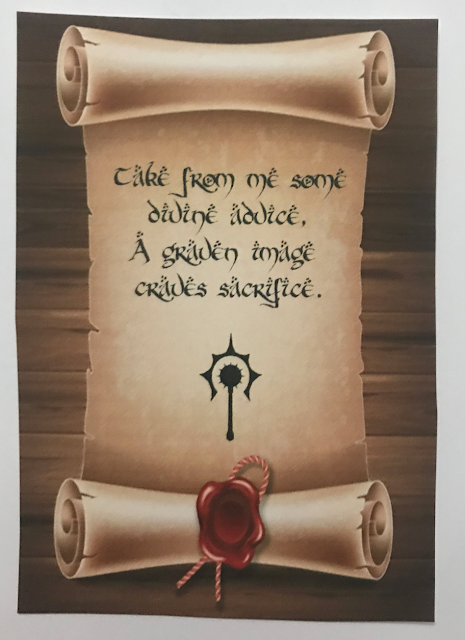 So, assuming that 2 and 2 can be put together to equal 4, each player places their gold pile from Chapter #2 onto the base of the great gnome god. If so…OPEN SESAME!

Once inside the seemingly abandoned outpost, the PC’s creep down a long spiral staircase that opens into one really big room. 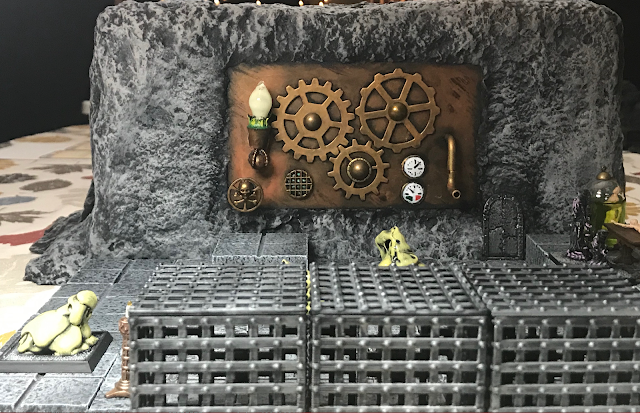 On the tall back wall, carved from the cavern in times long past, sits a great machine of copper. Huge gears turn and grind in a very grand, very gnomish, and very Steampunk fashion. Gauges spin. A glass receptacle cooks glowing slime with a green flame. A skull and crossbones wheel controls the monstrous device.

To the left of the PC’s is a raised stone platform, upon which sits a most sinister laboratory. Hooded monstrosities, experiments in mind flayer reproduction that didn’t quite turn out, use their tentacles to grasp dissecting tools. All around are arcane trinkets, potions, books…which could be loot, who knows? 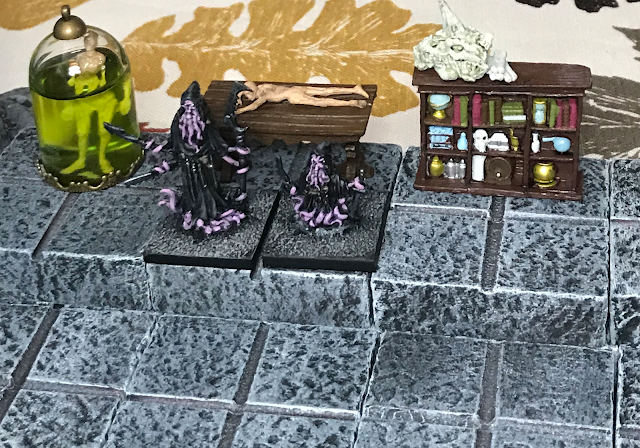 Manning the wheel is a true illithid…Dr. Z! Clearly the mastermind of this sinister house of horrors, he hides behind an energy shield that renders him untargetable. (I didn’t get him painted in time for our first run of the adventure…but he looks like this:) 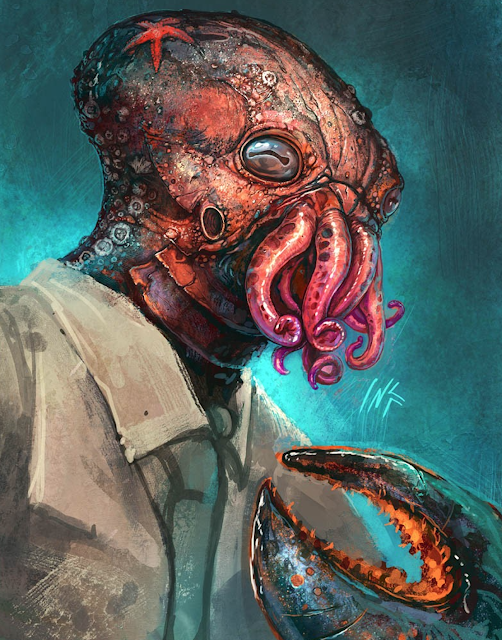 The foul aberrations engage the PC’s. While they are occupied, however, Dr. Z spins his wheel and reveals the full horror of his machine. Once every other round, a large ochre jelly is ejected into the center of the room. Being really stupid, these move in random directions until they hit food. In order for the PC’s to target Dr. Z, they must burn down the two hooded freakazoids before the room fills with angry sludge!

Should the characters defeat Dr. Z, all jellies despawn and some truly arcane loot is revealed: 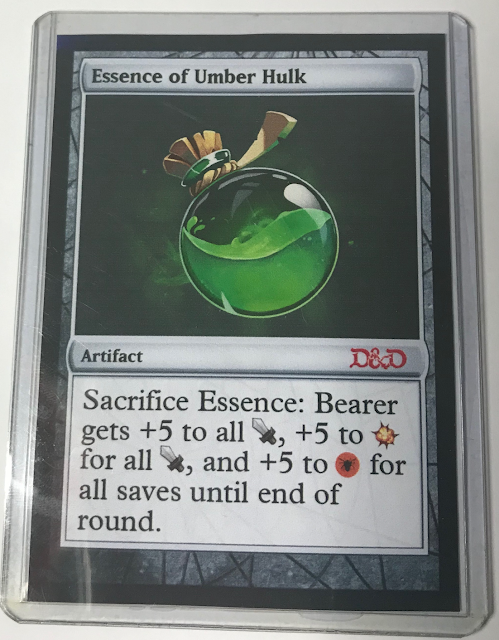 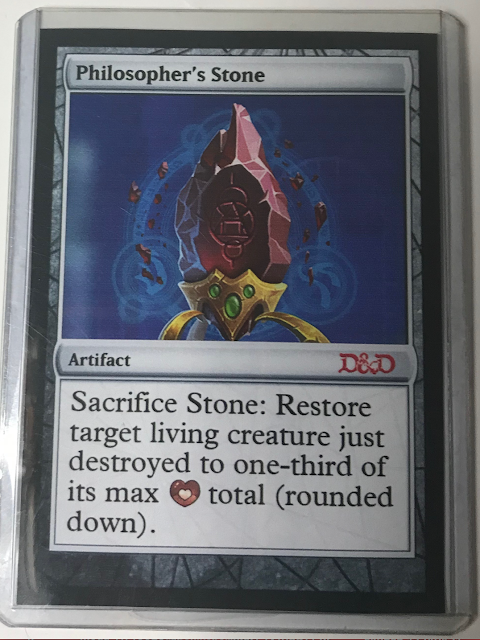 Chapter 6: Are They Housebroken?

It is at about this time that the PC’s start wondering where that gnomish envoy ran off to during all this fightin’. The little rascal winks back in, just in time to hear rattling from the three steel cages in the back of the hall. Apparently, there were other lab rats that the mind flayers were waiting to experiment on:

In front of each cage is the copper visage of an animal: ape, wolf, and bear. The envoy whispers to Erasmus the Ranger that he must conquer his fear and choose a pet from the three dire beasts in front of him. (But who to choose? Wait…did the ranger get a scroll too? Because that would be, like, fair and stuff.) 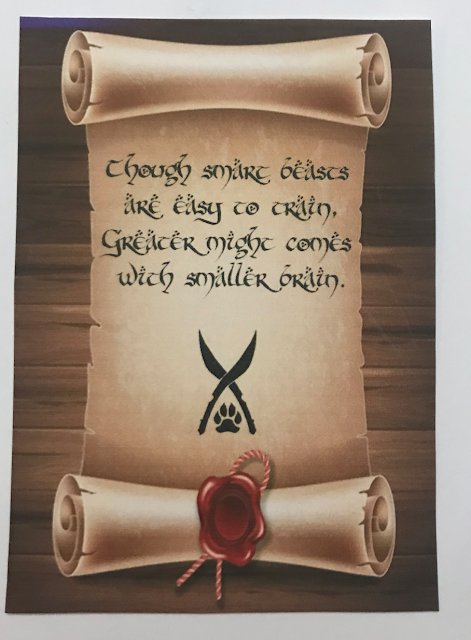 So, what happens next depends on the party’s choice, and Erasmus’ luck with his Tame Animal ability: 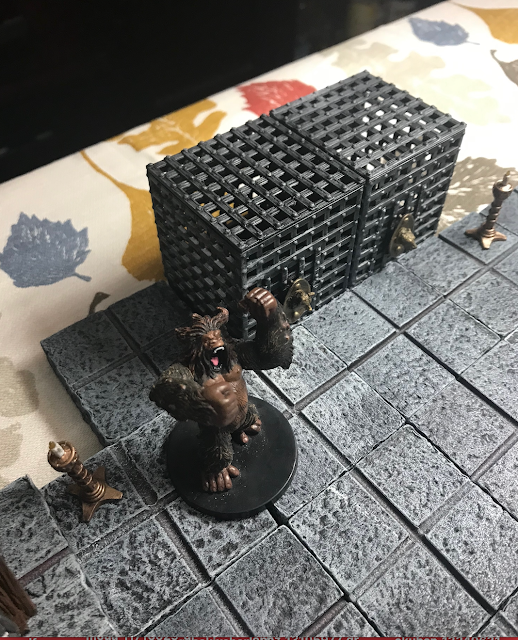 The dire ape is the weakest of the three in a fight (and thus least valuable for the road ahead), but it can be tamed after failing only one save. 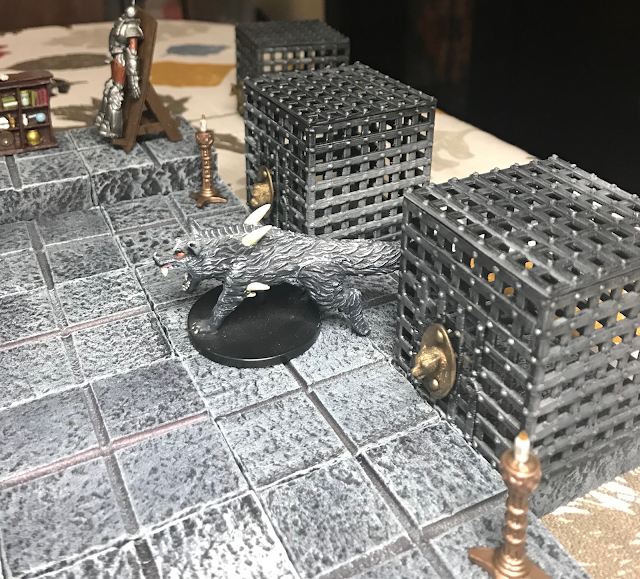 The dire wolf is tougher, with a cool stunning attack, but it requires two failed saves to successfully tame. 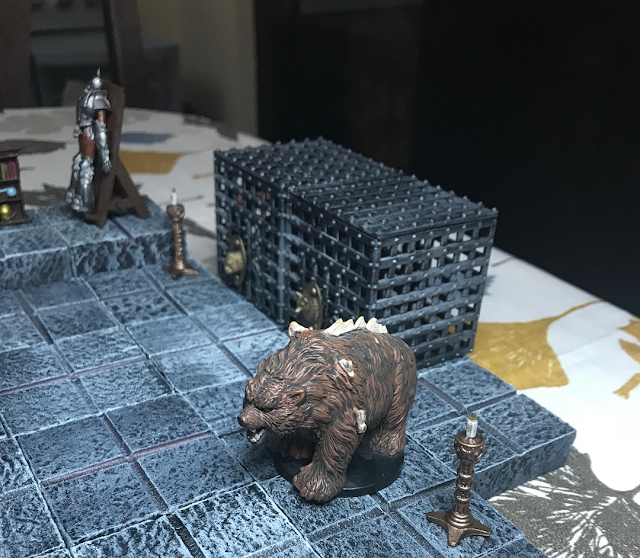 The dire bear is a multi-attack, triple-digit hit point monster. But Erasmus needs to survive until three failed saves to tame it. During taming, no attacks can be made on the animals…it is up to ol’ Dras to keep Erasmus up until a taming attempt can be made at the end of each round. Should Erasmus successfully gain a pet, our heroes level up! 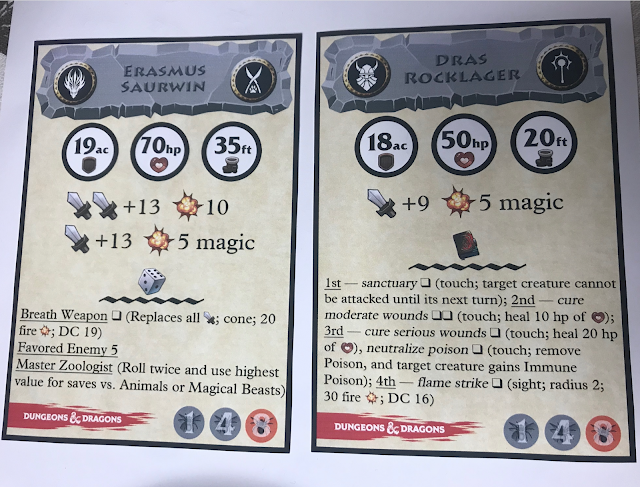 Feeling good about fighting, healing, and taming their way to the end of this tunnel, the players congratulate themselves on a job well done. It’s then that the gnomish envoy announces that they have now earned their reward, and with a flick of the wrist, the heroes are teleported… 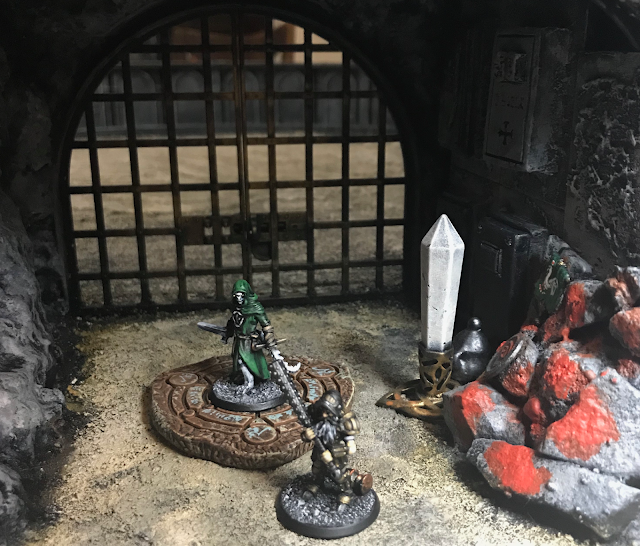 They immediately recognize the different burial customs of the sapient races. A silver urn filled with the ashes of an elf lord. The stone obelisk memorializing the death of a dwarf. The stone tombs of men buried in the wall. An orkish burial mound sprinkled with the dead’s blood. A banner of the halflings, sent as a token to remember the idiot who got killed while fooling around on some stupid adventure. But the PC’s also notice the great bronze gate leading out of the crypt. It opens, and they stroll out to reveal… 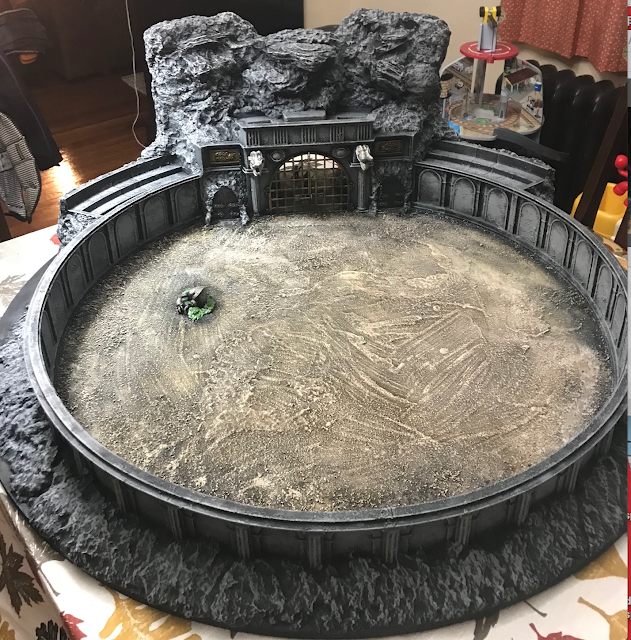 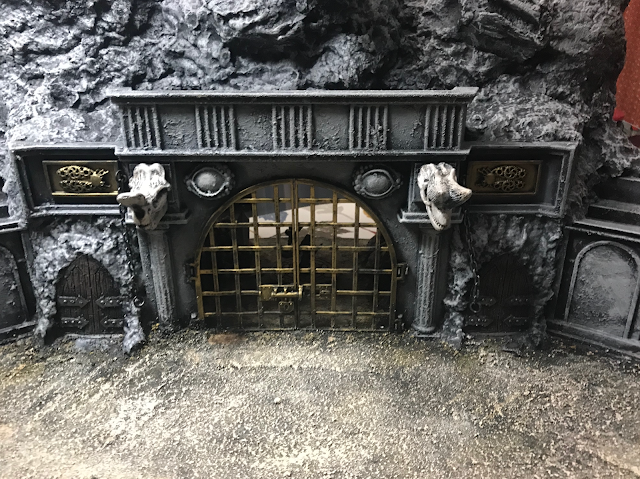 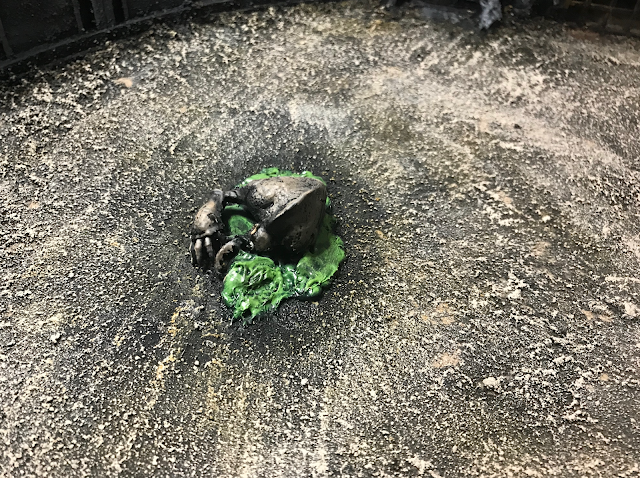 …the Great Arena of the Gnomish Empire! Unbeknownst to the players, but beknownst to the DM, deep gnomes live a horrible existence in the Underdark. This has caused them to embrace one fleeting pastime that brings them joy…watching death sports!

The great arena was carved centuries before in the deepest caverns of the Underdark. Clockwork cicadas, the Imperial emblem, are mounted in bronze. The great skulls of beasts, each a former champion of the arena, are mounted for remembrance. The most recent victim, an umber hulk, lay splattered on the arena floor.

The Gnomish emperor squeaks proudly about how the envoy has found worthy contestants to end the 79-kill reign of the current champion: the Spawn of Goremaw! 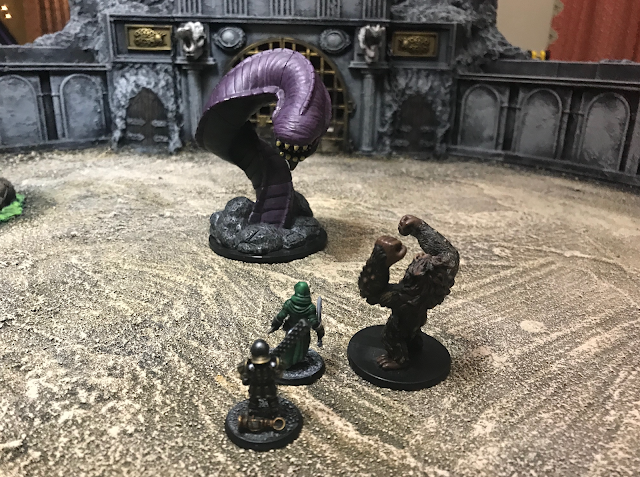 The purple worm fight is phased. On the first round of a cycle, it can bite and swallow victims whole (destroying them…which is a good thing there are abilities like Master Zoologist and artifacts like Philosopher’s Stone). On the second rounds, it can add its poisonous tail stinger to the bite attack. On the third round, the worm burrows and cannot attack or be attacked by normal attacks. The gnomish crowd, wishing the PC’s to succeed, toss down tribute packages. The players may choose a free heal or a free hand grenade to toss at the worm hump. After that, the cycle starts again with the worm re-emerging.

If the PCs can defeat the purple worm, they get their last bit of loot! 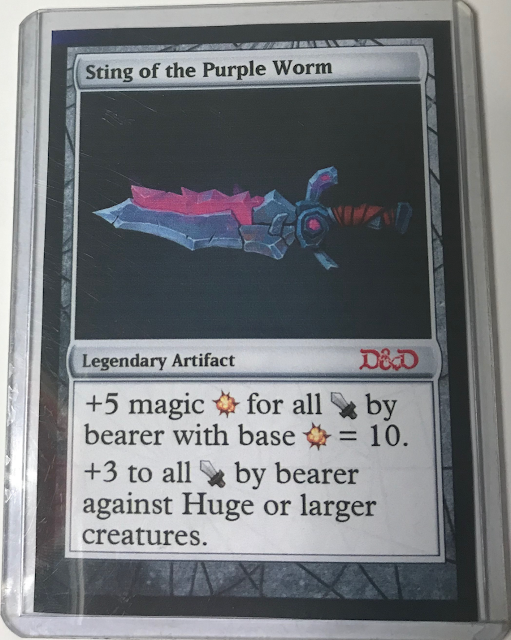 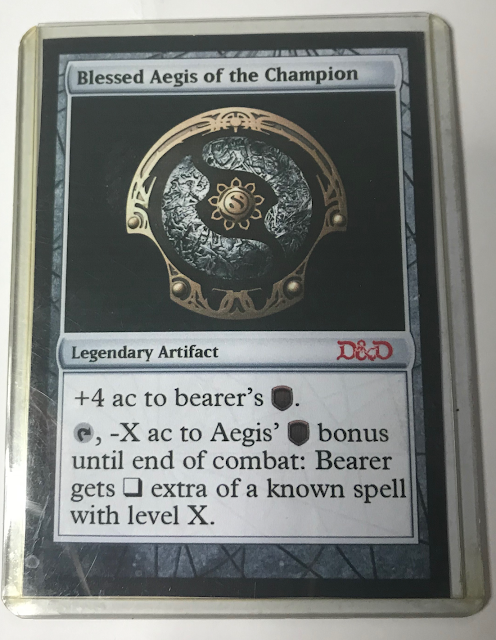 Well, that’s it! Thanks for reading through all of this. If you’d be interested in how I made the terrain for this dungeon crawl, I’d be happy to do another write up and post it here.

Thanks Mark! I really love the terrain, from the massive arena to the tiny details of the lab. There's also a variety of challenges, decisions, and interesting monsters to bash. So dear reader, what do you think? I've been encouraging Mark to take it to a local convention (or even bring it out to ScrumCon). Would this be something you'd be interested in trying?
Posted by John at 4:14 PM