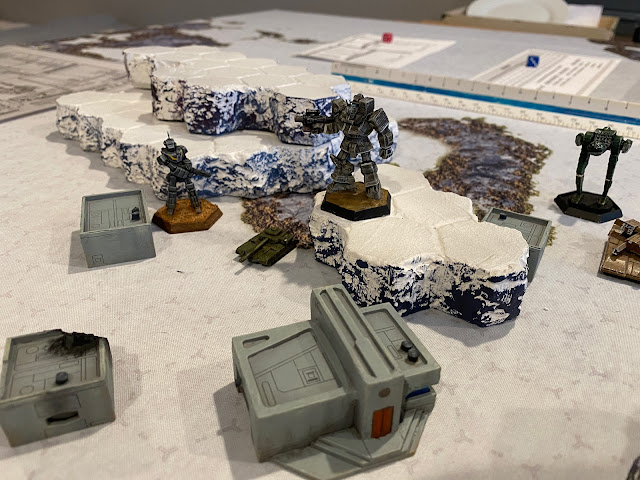 My son had his choice of three different missions. Because he'd be hampered in repairing, rearming and salvaging mechs until he'd built up a supply cache he prioritized a supply run mission as his first objective. 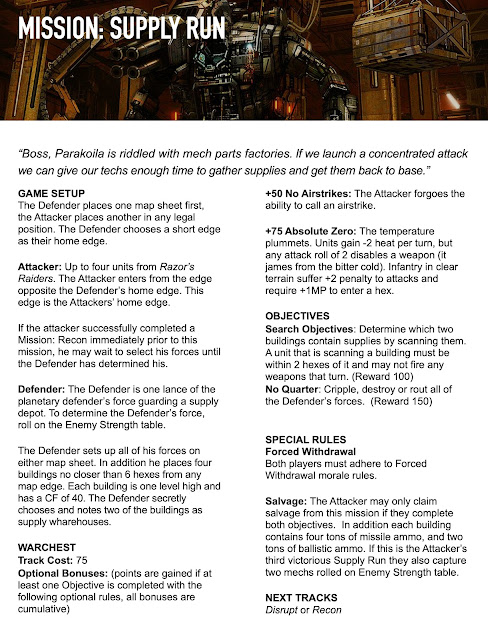 Unable to repair his recon lance, he was forced to send a lance of medium mechs into battle. Not cut out for lightning fast raids, they'd be at a disadvantage during the battle. Increasing his risk, he decided to attack during a cold snap that plunged the temperature to 50 below zero. While the lower temperatures would help mitigate the battlemech's heat generation there was the possibility the utter cold and moisture would freeze up or short out some of their weapons (any weapon that rolled snake eyes on an attack would be disabled for the rest of the game).

With the mission parameters set I rolled up my defense force, adding +2 to my random unit generation for being Lyran and having full communication capabilities. My lance of light and medium mechs would be augmented by a Scorpion tank and a 95 ton Ontos (an extremely rare vehicle on Parakoila). The Ontos is a behemoth, boasting two LRM 5s and eight medium lasers. It took up a position defending the supply depot from the approaching raiders.


My son was suitably worried about the Ontos, and as his lance crested the rise overlooking the supply houses they prepared for long range sniping to wear it down before it could bring its laser battery in range.


Concerned the long range attacks by the Dragon, Trebuchet and Wolverine may eventually batter the Ontos apart from long range, my light mechs - a Commando and Jenner - raced towards the attackers, hoping to skirt their right flank and hit them from the rear.


The Wolverine and tanks trundled into cover near the supply depot storehouses. 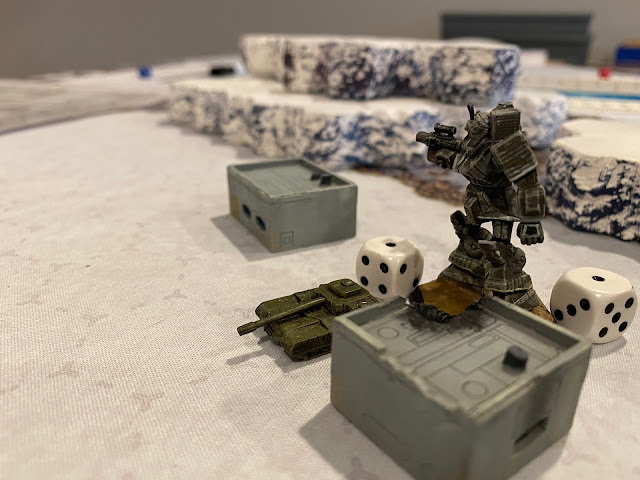 
Despite being behind partial cover the Trebuchet suffered a series of unlucky strikes. Flanked by the Jenner and weathering long range missiles from the Ontos, the fusillade cracked its armor and touched off an ammo bin. Only our house rule that reduces ammo explosions from obliterating mechs saved it. Despite that saving grace the Trebuchet was nearly cored. Under our morale rules such a devastating attack shook the merc's morale.


One small glimmer of hope was the brutal beating met out to the Lyran Commando. Having swung too close the Dragon, it suffered laser fire and a final deadly kick which crippled one of its legs. Failing its piloting roll the Commando crashed to the ground. 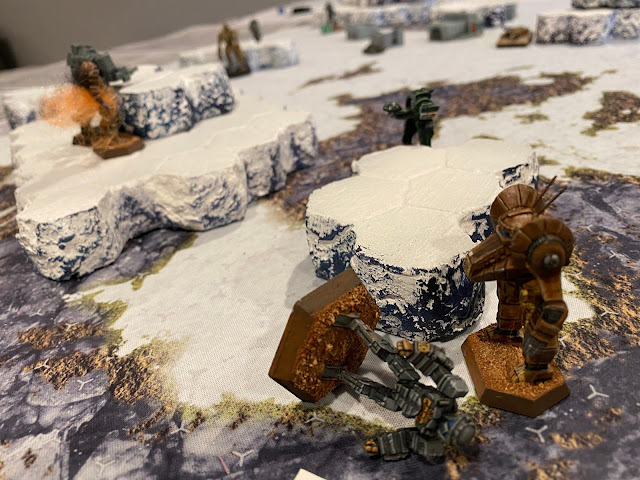 With their Trebuchet crippled and Centurion losing armor quickly, the mercenaries redoubled their effort to destroy the Ontos so they could move into the supply depot. They began moving forward out of cover, but doing so exposed their backs to the Lyran Jenner.

With such tempting targets, the Jenner pilot couldn't resist mashing the fire button, executing multiple alpha strikes in a row. Even with the sub zero temperatures its heat spiked to 15 points.

Now out of cover, the Ontos saw its opportunity. It rolled forward, finally bringing its eight lasers into range of the wavering enemy Centurion and fired everything it had at the wounded mech.


Sparks flew and smoke billowed from the Ontos' laser battery as multiple weapon systems shorted out and jammed from the cold! We use a single "pilot die" to speed up attacks. With it rolling a one and multiple other dice showing 'ones' the Ontos' lasers and LRM seized up in the freezing cold.

The mercs turned their full fury on the assault tank, obliterating the now vulnerable beast as it had drawn within range of the bulk of their weapons.

Their victory was short lived though. The Lyran Wolverine now focused on the mercenary Centurion. Leaping close it leveled its weapons at the mech and got a lucky head shot. Multiple criticals destroyed the Centurion's life support and sensor system and knocked the pilot unconscious. The Wolverine delivered a quick uppercut that sent its target crashing into the snow.


The tide of battle had turned against the mercenaries. Despite the crippled Commando failing four piloting rolls in a row attempting to stand up and deciding to eject before risking an ammo explosion triggered by falling damage, the Lyrans could see victory in their grasp.

The Jenner withdrew to cool down (now reduced to 4/6 movement!), but the Stinger, Wolverine and Scorpion moved in to put down the remaining mercenary mechs. With only a few morale points left, downing a mech or even inflicting a few criticals were all that were needed to secure the battlefield.

The Wolverines squared off, the mercenary using terrain to its advantage to protect its naked and vulnerable rear arc. 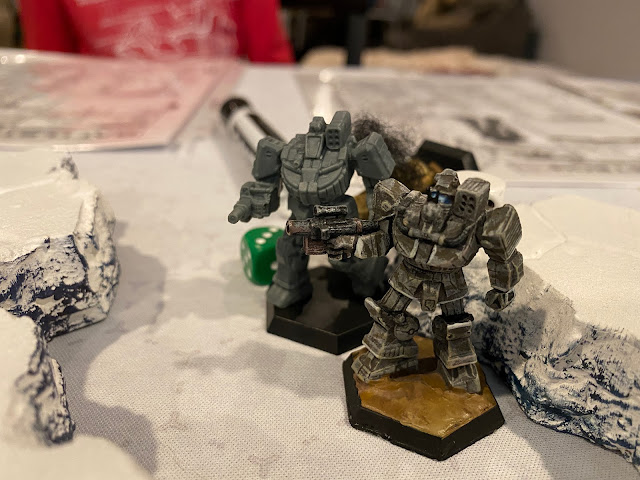 The Centurion pilot managed to rouse himself, only to be targeted by the enemy Wolverine. A final shot struck the Centurion's armorless arm, knocking out its heavy autocannon.


That was enough for the mercenary captain. Calling a retreat, the mercs beat a hasty exit and ceded the field to the Lyrans.

Without the Ontos I suspect the battle would have been heavily in favor of the mercenaries. I can't really determine the impact the assault tank had on the battle as it only managed to fire sporadic LRM attacks at dug in enemy mechs. It was the focus of the bulk of attacks on the Lyrans for the first half of the game though, and my Jenner was able to get into position to be an absolute terror. Having half the weapons of the Ontos, the Jenner shredded two medium mechs and was still quite intact by game's end. That pilot deserves a medal.

My son's mercenaries are in a jam now. Having failed to secure a critical source of supplies they'll have to go into the next battle without any repairs. We discussed how tricky the campaign on this world would be, how it would start very difficult and get easier as he struck at the Lyran defenses, but the loss still stung. Don't feel too bad for him, it's the first time he's lost a game of Battletech.