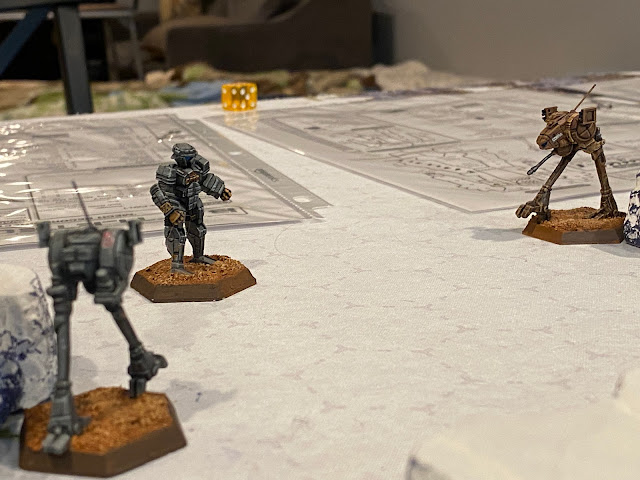 Using a mission option to launch his recce at night would hinder ranged weapon attacks, but since his mechs only needed to scan enemy forces and hold out for eight rounds my son felt it was in his best interests to use stealth and the cover of darkness to his advantage. Examining the battlefield he found it was crisscrossed by ice ravines, one of which was the site of geothermal activity based on the number of geyser plumes spouting from it. 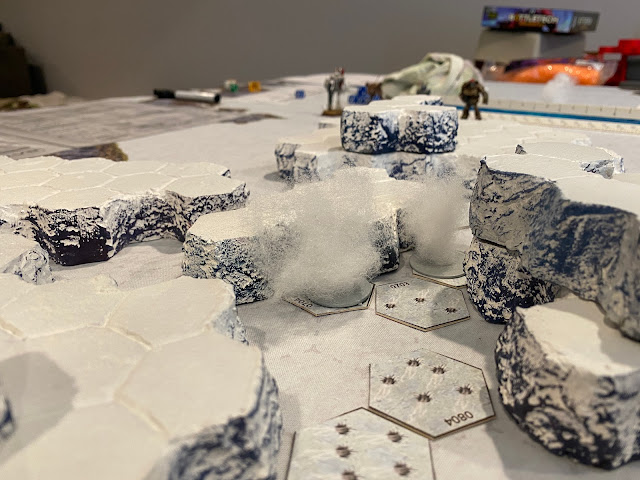 His recon lance took up a position on the western edge of the ice ravines, intending to use the more open ground in that direction to speed his approach towards the enemy units now detected on radar.

The enemy force consisted of a single Lyran Griffin perched in a sniping position on an outcrop, a Commando and a pair of Scorpion light tanks backed into defensive positions to meet the attackers. Several more mechs showed up on the merc's sensors — Lyran reinforcements en route to bolster the Griffin's defenses. 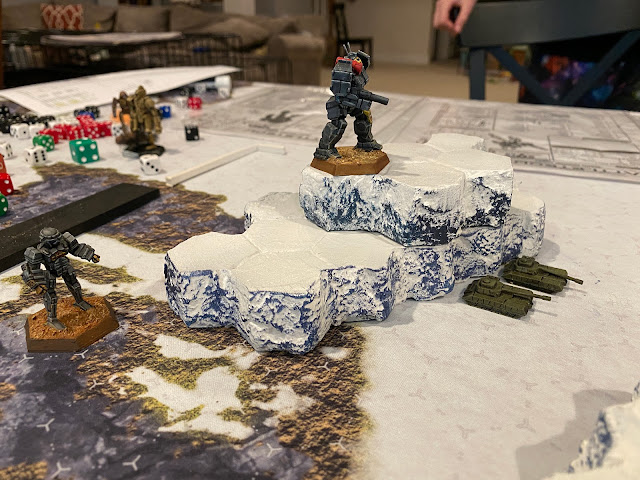 With clear terrain ahead of them, save for single low hill, the mercenary Locust and Wasp throttled up, kicking up clouds of ice crystals that glittered in the meager starlight. 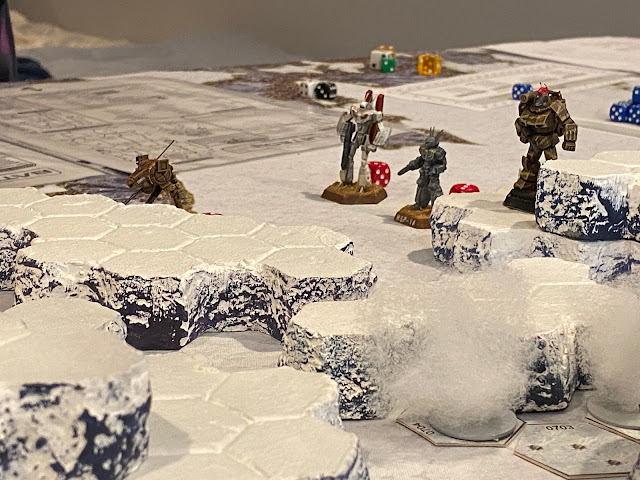 The mercenaries decision to launch their raid at night was paying off. The recon mechs high speed and cover of darkness made them untrackable by enemy weapons. The mercenary commander chortled confidently.

Within moments the Locust piloted by the mercenary company's newest edition, Sgt. 'Cooler', was toe to tread with the enemy tanks. Taking only sporadic machine gun fire she deigned to return fire using her advanced sensors to read an array of data from the enemy transponders instead. 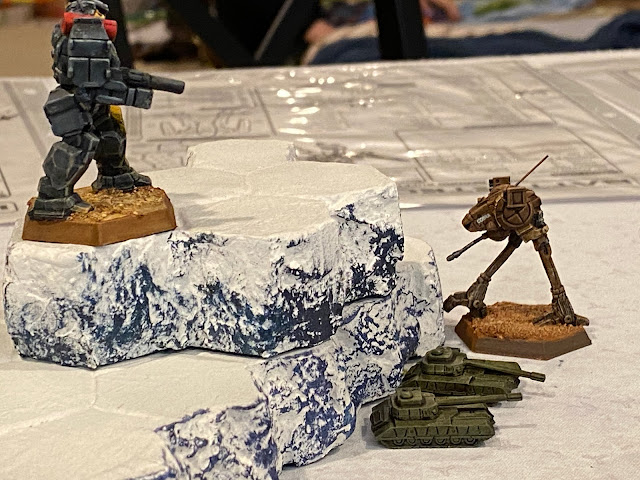 With one enemy scanned the mercenaries were 25% of the way to victory in the first 30 seconds of the engagement. 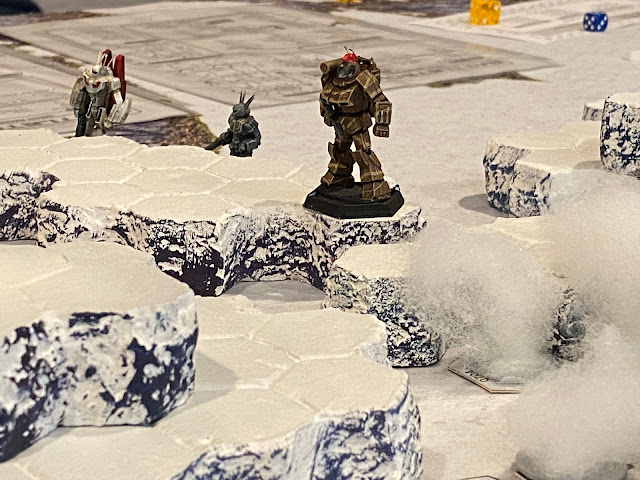 Taking position on low hill, lance commander "Pepper" in her Griffin notified her mercenary lancemates she had a readout on the approaching enemies: a Locust and Stinger had arrived within weapon's range. 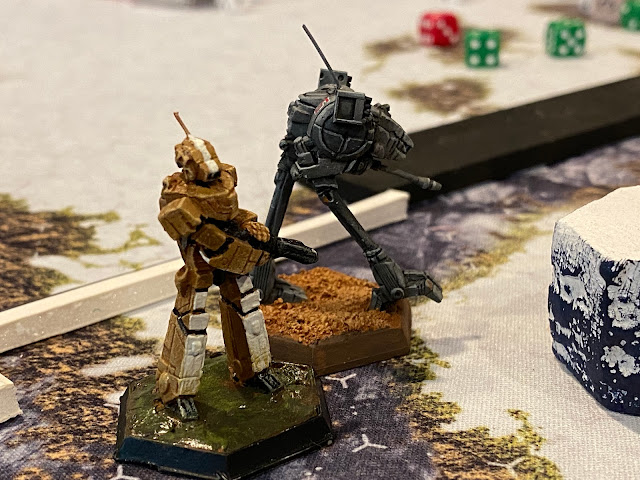 The tanks backed off as the Lyran Locust and Commando swung into action, sweeping towards the overconfident Locust that had charged their position. Seeing her exposed position, Sgt. 'Cooler' threw her Locust into reverse, putting distance between her and the lights rushing her position. 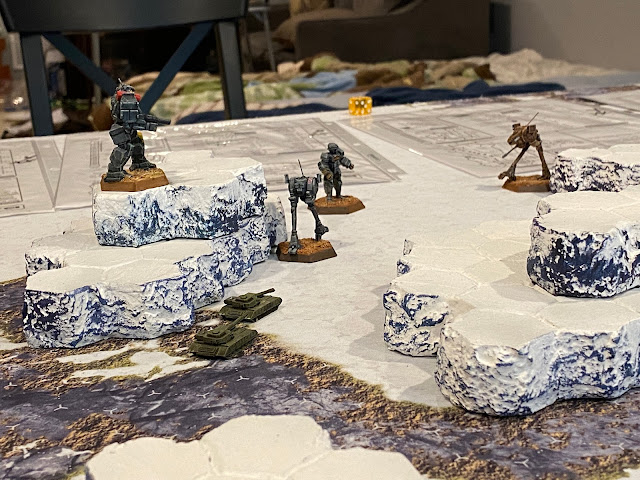 On the far flank the Lyran Stinger loped forward, but lance commander "Pepper" was detecting a strange sensor readout from it. The entire battlemech's frame began to shift into a new configuration. This was no ordinary Stinger, but a Stinger LAM! It gunned its jump jets and took to the air, angling for the mercenary rear in a wide sweep around their flank. 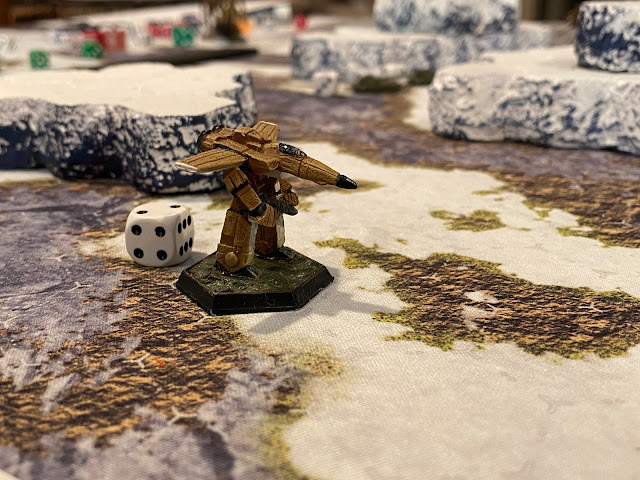 "Pepper" ordered the Phoenix Hawk to hunker down behind the edge of a nearby ice ravine. Elbows propped on the ridge, the mercenary Phoenix Hawk began laying down cover fire for its retreating lancemate in her Locust, while 'Pepper' in her Griffin and the Wasp used jump jets to close the distance to the enemy in hopes of gathering the vital intel. 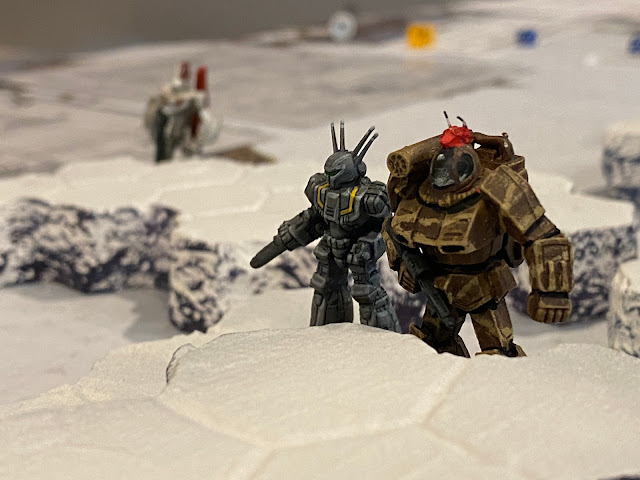 Seeing the terrible risk her lancemates were putting themselves in, Sgt. 'Cooler' feinted and juked around the approaching Lyran light battelemechs before hurtling towards the enemy positions again! In a flash she had rounded the high ridge and run a sensor scan with the Lyran Griffin (now engaged in a PPC duel with 'Pepper' in her own GRF-1N). 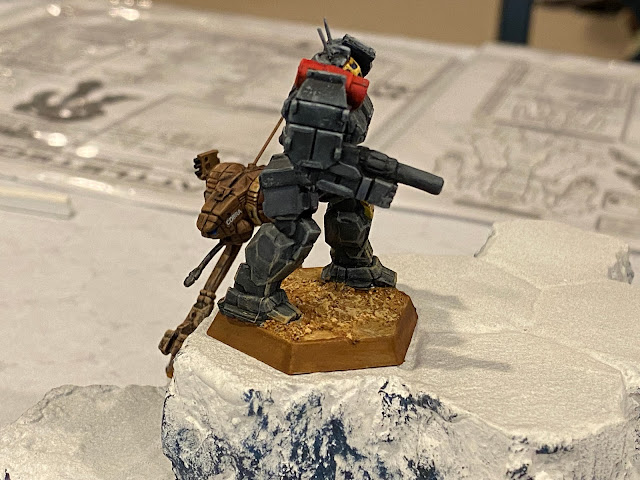 With their prey slipping their jaws, the Lyran hounds set their sights on the Wasp instead. Startled by their approach, the mercenary Wasp took a knee in order to draw a steady bead on the approaching enemies with his medium laser. 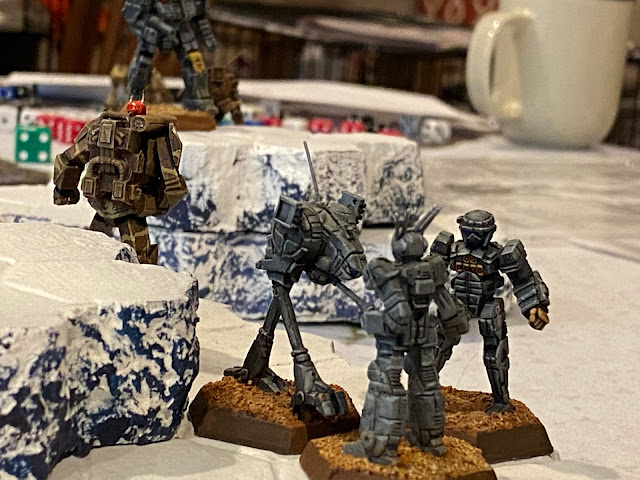 His hesitancy would prove disastrous. Robbed of maneuverability, the Wasp was easy prey for the two Lyran scouts. 'Pepper' turned, LRMs impacting her left arm from the distant Griffin, assuring the Wasp she could inflict some rear shots to peel the two Lyran lights off him. Seeing he was outmatched, the Wasp's pilot declined. "Negative lance commander, scan the Locust. I've got the Commando." Dropping his medium laser the Wasp conducted a close range scan of the enemy Commando as target lock alarms rang in his cockpit. 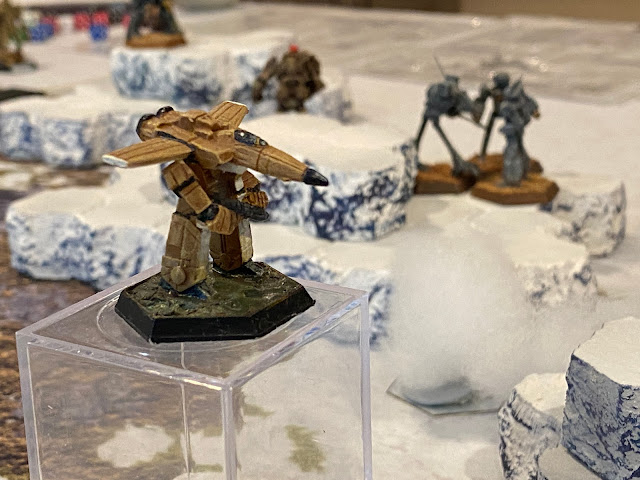 The Stinger LAM continued its long swing around the battlefield while SRMs and medium lasers ripped the Wasp apart, the close quarters fire fight illuminating the rest of the battlefield. 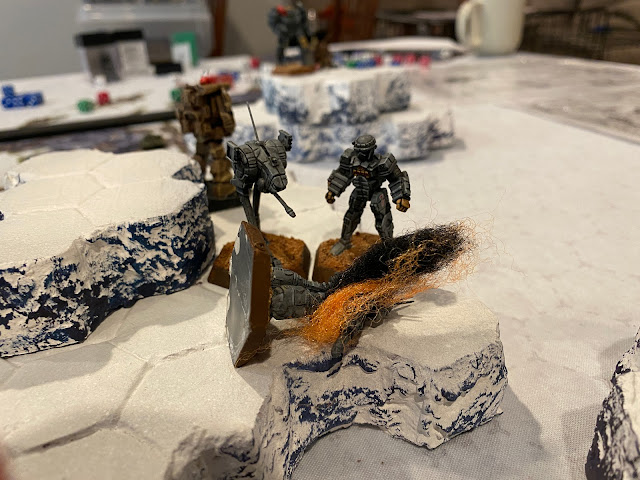 As the burning wreck that was the Wasp fell to the ground 'Pepper' completed the final scan on the enemy Locust. With the mission complete she ordered the lance to fall back to defensive positions.

Sgt. 'Cooler' in her Locust skidded to a stop. Confused by the twisting ravines she turned her Locust 180 degrees and raced back along the path she'd traversed earlier, right into the grasp of the Lyran lights. Seeing she was threatened by rear attacks from the enemy Griffin, 'Pepper' triggered her jump jets leaping into hand to hand combat with the enemy Griffin in hopes of covering 'Cooler's' escape. 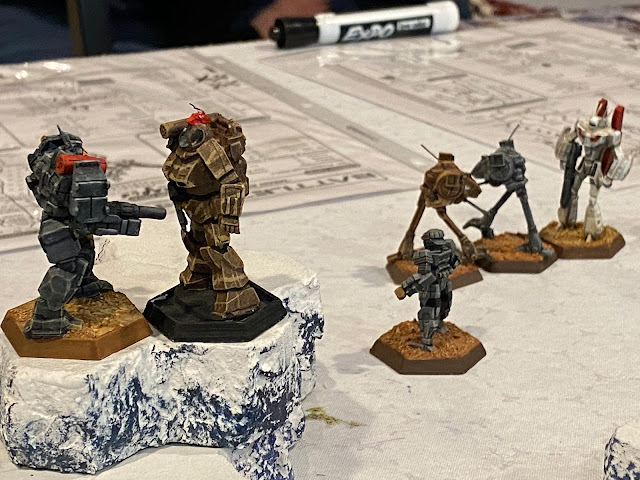 Undistracted by 'Pepper's' heroic charge, the enemy Griffin drew a bead on the Locust and fired a single bolt of charged blue particles at the Locust. 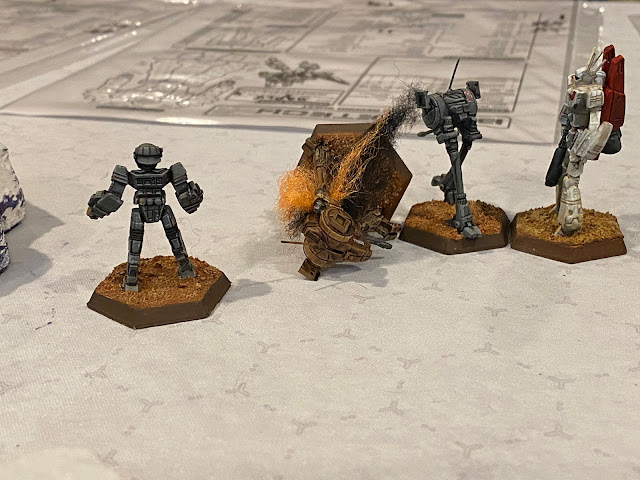 The PPC blew the Locust's leg clean off. As her mech toppled to the ground Sgt. 'Cooler's escape pod rocketed into the sky on a pillar of flame. With half her forces gone, 'Pepper' ordered the remaining Phoenix Hawk into a full retreat. The two mechs used their jump jets to disappear back into the darkness, custodians of the vital sensor readings that were their primary mission, but at a heavy cost.

A good game, but not my most shining moment as a parent! The ease with which my son was able to race his Locust into position and scan my forces, coupled with the penalty from night fighting (a +2 to ranged attacks) made it look like we'd barely roll dice before the mercenaries would be able to chalk up another victory.

As our units closed though, those to-hit number dropped to 10s and 11s. I had learned my lesson in our last game in regards to keeping light mechs alive when my two Commandos were blown apart after I let their speed drop. I kept my Commando and Locust moving at a run constantly, but it was a lesson I failed to pass on to my son. Getting tunnel vision on the game itself, I missed the fact that his Wasp stopped moving for a round. I still held out hope he could get the rest of his units off the board safely, but my Griffin managed to roll incredibly well with a low hit probability shot with its PPC against my son's Locust.

The boy took it like a champ. He debated risking his remaining mechs to scoop up his ejected pilots but decided getting the intelligence back to base was the highest priority. And the LAM, which I've never had a chance to use in game, failed to do much in this short, sharp encounter. I don't think this will be the last we see of it though.