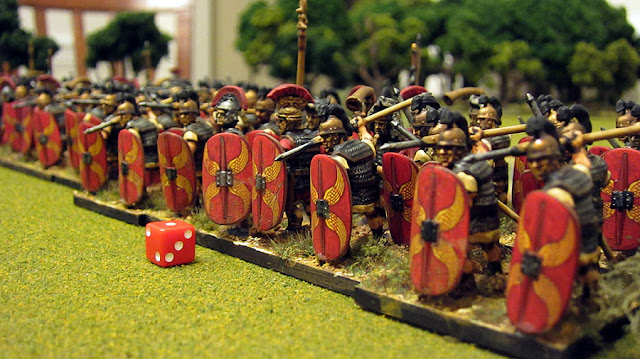 It's been a busy summer and far too long since we got any minis on the table, but my wife and I found a  single free evening to play a short game of Hail Caesar. Each time I play Hail Caesar I try to get a better handle on the rules and try something a bit new. For this game we came up with a scenario rather than fight out a simple bash.

Julius Caesar is throwing around his muscle, using the migration of celtic tribes as a pretense to launch attacks on their "aggressive advances". In this hypothetical scenario a detachment of Roman legionnaires, having defeated one celtic tribe in battle, advance on celtic village intent on burning the inhabitants out. Will the defending celts summon a defense in time to drive the Romans off? AAR after the jump.


The Romans begin arrayed along a short table edge. They need to advance out of the woods, over a shallow river, break through the Celtic defenders and set fire to the barbarian village. 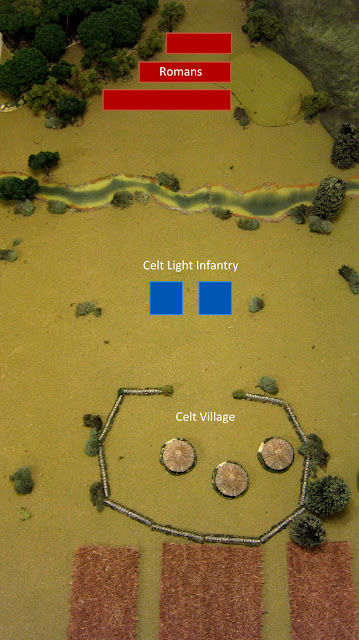 The heavy infantry must set up with 18 inches of their friendly table edge. The light cavalry may set up anywhere on the roman side of the river.

The shallow river is fordable for its entire length and is treated as a linear obstacle.

The Roman goal is to burn the village. Any unit that spends it's entire move action in contact with a building burns it down. If the Romans burn all three buildings they are victorious.

The celts have been caught unaware. Only a few young men and hunters have managed to form up on the celtic side of the river to hold off the Romans.  The barbarian chief quickly attempts to gather his warriors to form up and repel the invaders.  Scouts from the previous battle have also returned to inform the chief that cavalry remnants from the previous battle are enroute to provide additional relief.

The celt general begins in the center of the village. Two units of light infantry begin anywhere on the celtic side of the table, at least 12 inches away from the river. A stone wall marks the outer edge of the village.

Each turn, the celt general may issue an order to the village, just as he would issue an order to a unit. The general makes a command roll and summons a number of warbands equal to the moves rolled (for example, if the celt general rolls a 7 he summons two warbands).  The summoned warbands are placed on the table in contact with the stone wall that marks the border of the village.

At the end of the 4th celtic turn, the medium cavalry arrive on a random table edge on the celtic side of the river.

If the Celts destroy 3 of the 6 Roman units they will break the invader's morale and drive them off.

The Alarm is Raised

My wife commanded the Romans in this game again, proceeding cautiously towards the river. She kept her Numidian cavalry close, taking cover in the woods. 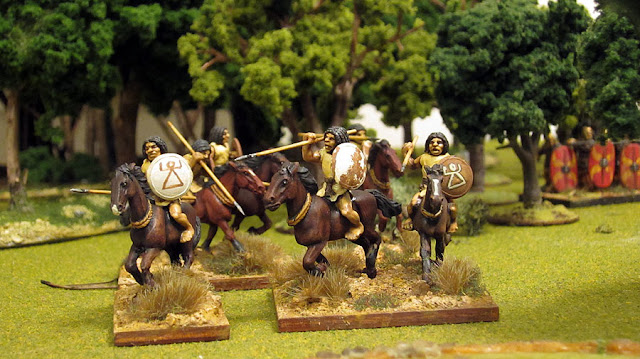 My celtic archers moved up and managed to inflict a single hit on the Roman line. Thankfully on my first "summon warriors" roll I manage to call forth two warbands who form up in front of the village. 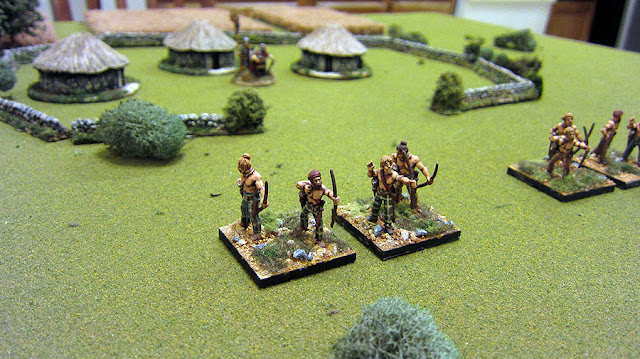 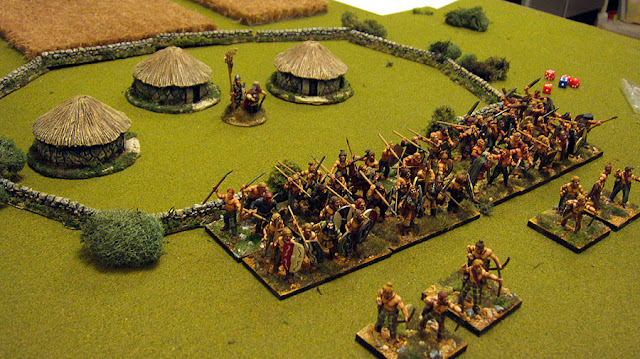 The Romans and Celts spent the next two rounds moving into position, the Romans crossing the river under ineffective harassing missile fire, while the celtic chief manages to summon his last warband. I placed the final warband on my left flank to meet the Numidian cavalry who had crossed the river and were looking to dart around to my rear. Finally, with the battle lines drawing close, the relief cavalry arrives on the Roman flank. 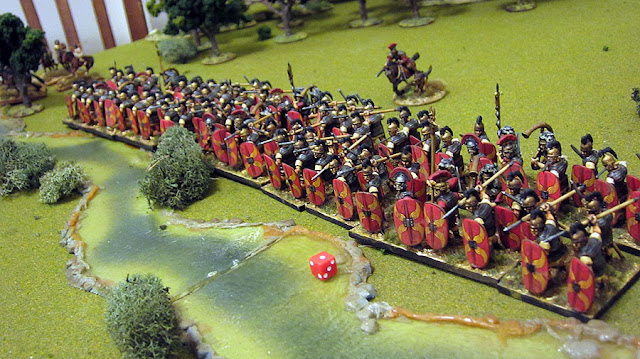 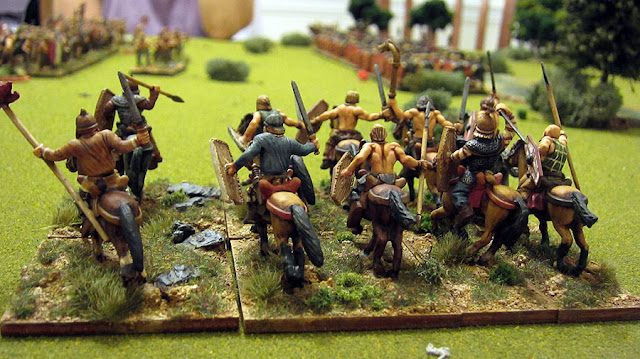 To screen her cavalry, my wife detached part of her line to take care of the warband guarding my flank. Using the proximity rules she forced the warband to deal with the Romans directly in front of them, and managed to charge them. 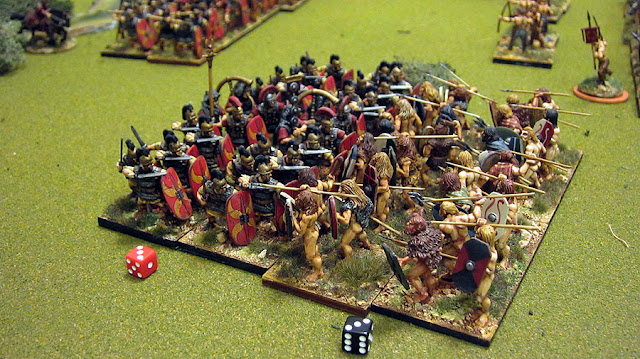 Hoping to use my light infantry to hold off the main Roman line, I formed them up into close order. I wanted to gain the +1 charging bonus for my warbands since I knew I had to make that initial charge count. If the Romans couldn't contact my main line with a rush, I thought I could initiate a charge of my own. 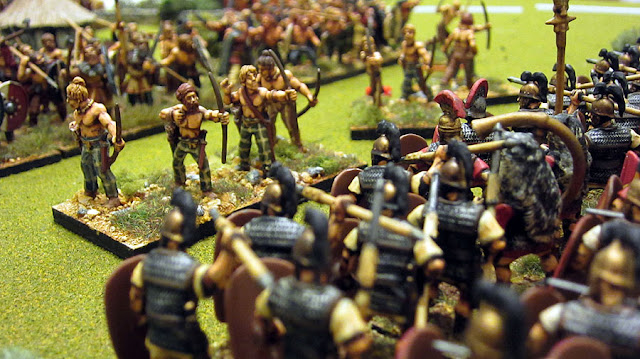 With my flank engaged, my wife managed to sneak her cavalry into my village! 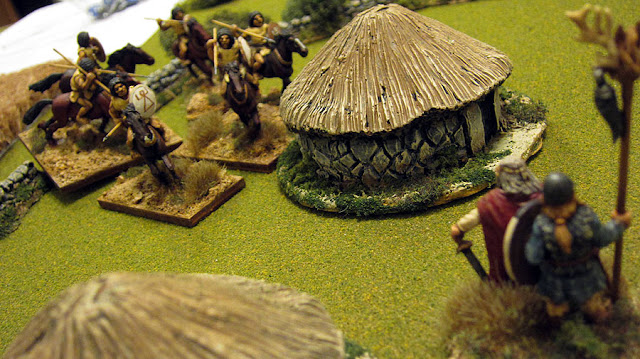 So That's How a Sweeping Advance Works

Each of these skirmishes seems to drive home a new aspect of the rules that I hadn't quite internalized yet. For this game it was the sweeping advance. On my flank, my warband was no match for the Romans in the sustained combat. I had used up my warband's wild fighters ability and was only rolling 6 dice to the opposing Romans 7 plus 3 dice from a supporting Roman unit. After destroying the warband, and with no enemy units within their front arc, my reading of the sweeping advance rule indicated the victorious legionnaires could make two moves, taking them to the edge of my village! 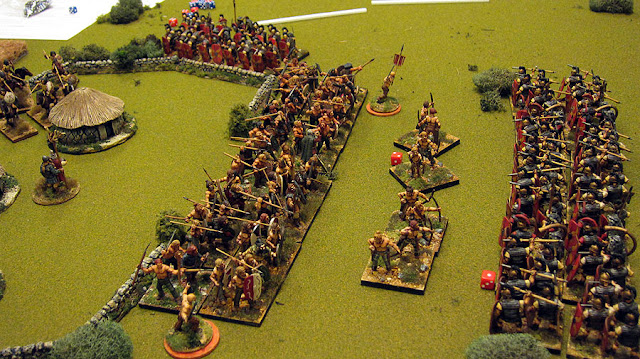 On the main battle line the Romans easily overwhelmed the light infantry as expected, but again the sweeping advance  allowed them to charge forward into contact with my warband line, denying them the +1 charging bonus and carrying their own +1 victory bonus for defeating the light infantry archers. Disaster! 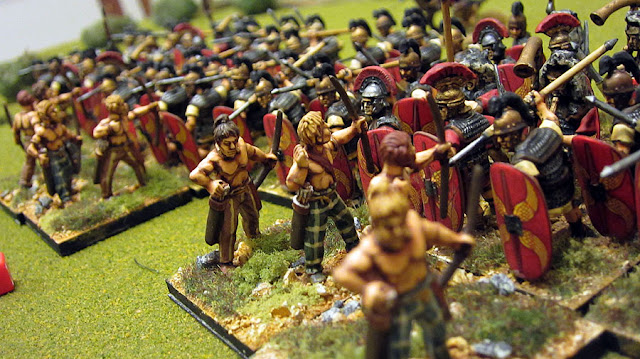 My original plan was to charge the Roman flank with my cavalry once the main battle lines met, but with the invaders descending on my village, I felt I had to race my cavalry to hold them off within the village and hope the warband line could defeat their opponents on their own. 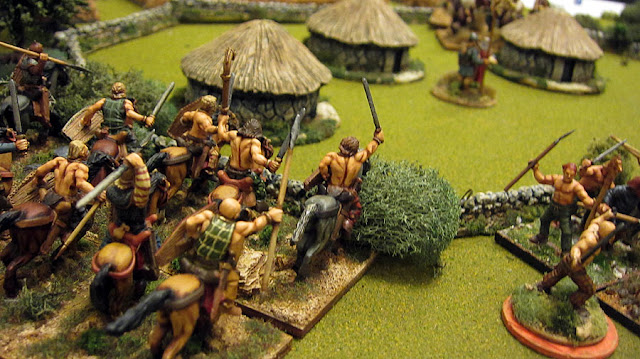 The ensuing melee saw my hopes dashed as my warbands crumbled under the Roman assault. 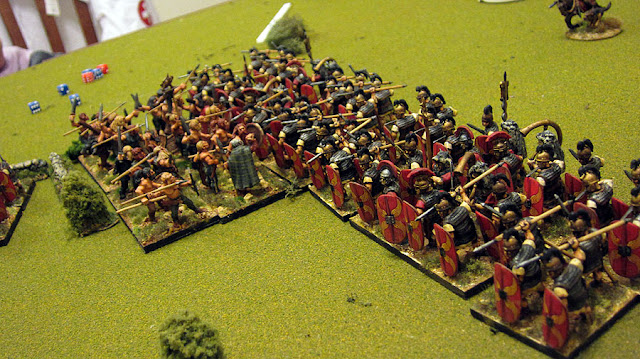 With the Romans in the village, over 50% of the celt defenders destroyed, and very little hope of the remaining cavalry fending off the Numidian cavalry, two units of roman heavy infantry and destroying half the enemy legion we decided to call the game.

The deck was stacked against the celts. Going by the points from the Hail Caesar army list book they were at a disadvantage, plus they had me as a general. Despite those factors I wanted to see how much terrain would have an effect on the battle, how much linear obstacles like the river and wall would slow units down and if the "gathering forces" scenario concept would work. Overall I was happy with the game as a small Hail Caesar scenario, but I think it needs to be tweaked quite a bit.

The celts need to be able to whittle down more of the Romans during their approach. Additional rough terrain, hills or woods for the celt skirmishers to hide in would have helped, along with additional celt skirmisher units.

The Romans arrived on table already in "battle formation".  Forcing them to arrive in column because of restrictive terrain so they could only form up on the far side of the river may have added an additional wrinkle in the Roman plans.

The celts need at least one more, if not more additional warbands. The Romans should be forced to race against the growing threat of the growing celt menace. Here are the overall changes I think I'll implement if I try this scenario again:

Reinforcements
Warbands (4 potential warbands. Warbands may not be summoned once there are any Roman heavy infantry within 18 inches of the village)
Medium Cavalry (1 unit. Arrive at the end of turn 4)
Warband stragglers (1 unit. Arrive on same table edge as cavalry at the end of turn 7. Do not have the Wild Fighter ability, having expended it in the previous battle against the Romans)

Another fun game of Hail Caesar, even if I lost (again!).  I really need to get some more ancients painted up. I've got celt skirmishers, cretan archers plus a host of carthaginian figures ready to go that will help bring my two opposing forces up to parity.