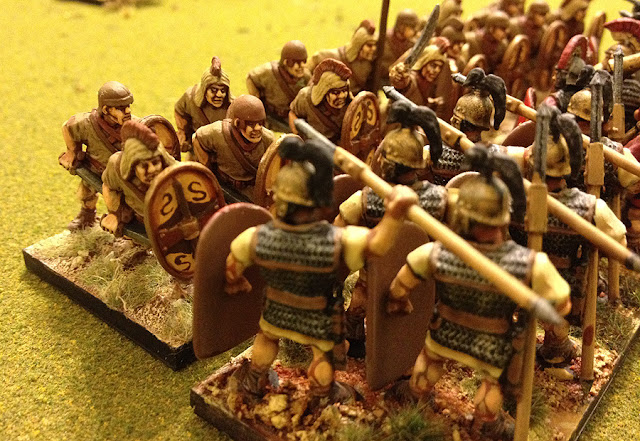 It's been a crazy busy week for me, but I did manage to get in another small skirmish of Hail Caesar the other day. We don't yet have enough figures painted up to match the army sizes suggested in the rules, but this was our first game where we had enough figures for it to really feel like an ancient set piece battle. After action report and thoughts after the jump.

battle. We switched sides from our usual commands, with me taking the Romans while Mike took the Celts.

The field of battle was fairly clear, one table edge taken up with some rough ground and high grass, with some low hills on the opposite side. 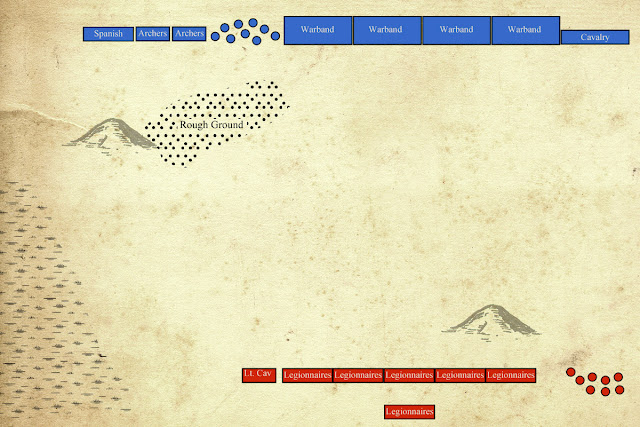 I arrayed the Romans in a single line, with Cretan archers holding one flank and Numidian cavalry on the opposite flank. I held a single unit of Roman legionnaires in reserve. With my line longer than he Celts, and a small hill near my deployment area I was hoping to take a defensive position on the hill, using my archers and cavalry to whittle down the barbarians before taking their inevitable charge.


Mike had a similar idea. He deployed his warbands in line, his medium cavalry on the flank facing my archers. On his far flank he arrayed his skirmishers ready to enter the rough ground with the newly painted Spanish holding is far flank. As this was the first time they hit the table, I expected them to crumble as soon as they entered combat suffering the "curse of the newly painted".

The first few years were interesting. My Romans moved onto the hill, and Mike was hesitant to charge their defensive position.

His skirmishers moved into the rough ground and I countered by moving my reserve legionnaires towards my flank.

On the opposite end of the battlefield I ordered my archers into action. Having not used the Cretan archers before, I was eager to see them perform better than their earlier performances. I moved them forward a bit, ready to flee, and peppered the opposing Celtic cavalry. Rolling only two dice for their attack proved fairly ineffective.

The Celtic cavalry responded by charging the archers who attempted to evade. The poor Greeks failed to roll far enough to evade and were run down and destroyed. Oops!


With Celtic cavalry on my flank I shifted my Nunidians to counter. The Celts fell back and each cavalry unit fell into a series of charges and retreats, attempting to get into position.

The Celts finally contacted the Numidians who were shaken in the ensuing melee. I used the Numidians "Feigned Flight" ability to extract them from combat, but the battle was coming to a head.  I'd already lost the Cretan archers, my Numidians were shaken, and my left flank was being disordered by repeated ranged attacks by the barbarian skirmishers.

I ordered my line to charge, sending my reserve legionnaires to counter the Spanish medium infantry. I hoped to weather the barbarians, and use the reserve unit to destroy the Spanish infantry, rout the skirmishers and roll up the line. If my Numidians could keep the enemy cavalry occupied I thought I might have a chance.

Even the best laid plans (and this was a pretty desperate plan at best) can't survive the whims of the dice. As our lines came into contact I reaped a bumper crop of 1's, while Mike was blessed with boxcars galore.

What would have been a tough battle at a disadvantage quickly became an absolute blood bath. While I managed to push the Spanish infantry back, my main battle line was absolutely torn apart by furious hairy nudists.

Mike and I agreed this was the most fun we've had with the rules yet.  I'm sure it doesn't transfer to this battle report, but two thirds of our game time was spent feinting, shifting our lines, and repositioning, preparing to strike, which turned out to be a lot of fun.  From my reading of the ways ancient and medieval battles, a lot of effort was spent bringing armies to battle on advantageous grounds. I had anticipated the initial deployment of our armies would simulate that aspect, but the minor adjustments and redeployment of reserves really felt like that sort of pre-battle planning and preparation.

This was also the first battle that felt like it followed a historical ebb and flow, with initial skirmisher harassment, cavalry chasing each other two and fro, and the final grand clash as battle lines met. I should have deployed my archers to the flank laden with rough ground, and used my Numidian cavalry to chase off the barbarian skirmishers as initially planned, but I'm going to lay the blame for my defeat on the endless 1's that doomed my battle plan. Really fun game, and every time I play my opponents suggest new units I need to get painted up. To me, that's a sign of a successful rules set.