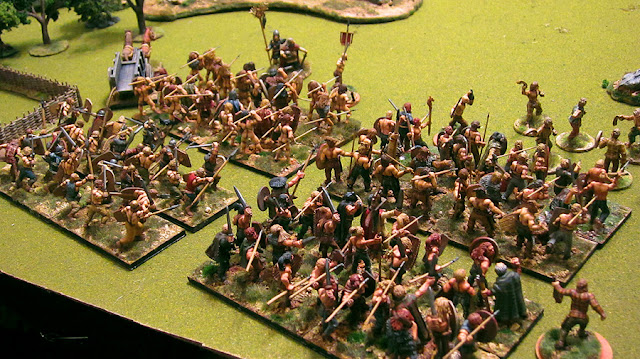 It was obvious when I got home from work that I was having a crummy day. After dinner, we washed up, I got my son ready for bed and tucked him in. I clomped back downstairs and out of the corner of my eye caught a glimpse of our kitchen table set up with a pair of armies facing off across a forest clearing.

My wife smiled sheepishly. "I think you'd feel better if we played a game." It was true, my mood did a quick 180 as we settled in to a surprise game of Hail Caesar. My wife GMs her first Hail Caesar game after the jump.


Roman Briefing (as conveyed to me) 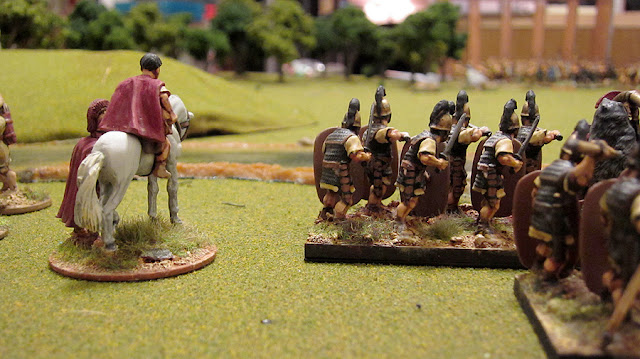 "Ok, so these Romans got cut off from their legion. They're trying to get back, but they've been disgraced by fleeing their last battle. Also they are starving. So they want to get these pigs to eat, and also to wipe these barbarians out. They can't return to their legion without killing these guys or they'll wind up looking like chumps." 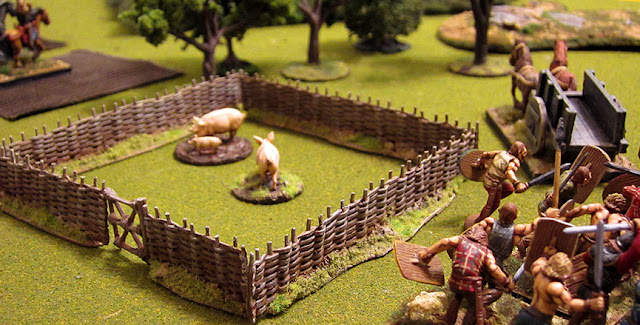 "These pig farmers see all the Romans coming and are all 'Yull nevar tehk owr PEEGS!' Also, see this woodland clearing over here? That's where they do their tribal dances, so obviously they don't want the Romans tromping through there. (These pigs are the cutest.)"

The deployment was set when I sat down at the table, taking command of the Romans. Their four units of heavy infantry were in two ranks behind a river snaking its way across the table. A small unit of Numidian cavalry and some Cretan archers held my left flank. A hill on the far side of the river looked like a good place to set these lighter forces up while my infantry crossed the river.

The Celts were massing behind a narrow passage between some rough ground and the edge of the wood. Their skirmishers armed with slings lurked on their right flank within the wood, while a unit of celtic cavalry was formed up within a turnip patch on their left flank, with only some brush before them. 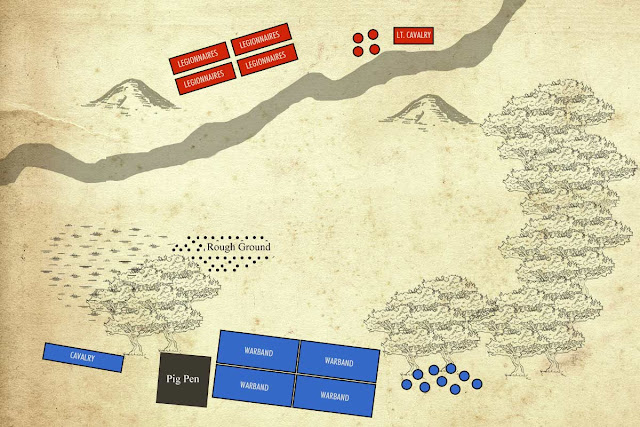 The Roman plan was to get across the difficult river crossing first, charging forward to plug the celt warbands up in the gap between the wood and rough ground. This would prevent them deploying into a full line in the open ground at the center of the table.

The Celts (I later learned) intended to hold the main Roman line with two warnand units so the other two could roll up the flank. The skirmishers would sneak through the woods into the Roman rear to finally pepper them with stones once the lines had clashed.

Both armies were forced to deal with challenging terrain. As the Romans, I started by sending my light cavalry and archers across the river to the hill on the far side. We decided the river would take three actions to move across (move up to it, cross, consolidate on the far side), and luckily my light troops rolled three moves. The heavy infantry wasn't so lucky, only able to move up the river before passing initiative to the Celts.

The Celts were in a tough position as well. They moved their cavalry into the scrub on their left flank, but the skirmishers made little progress through the woods on their right.


The warbands, with their larger base size and a narrow gap between the woods and rough ground could only manage to wriggle a single stand through initially. 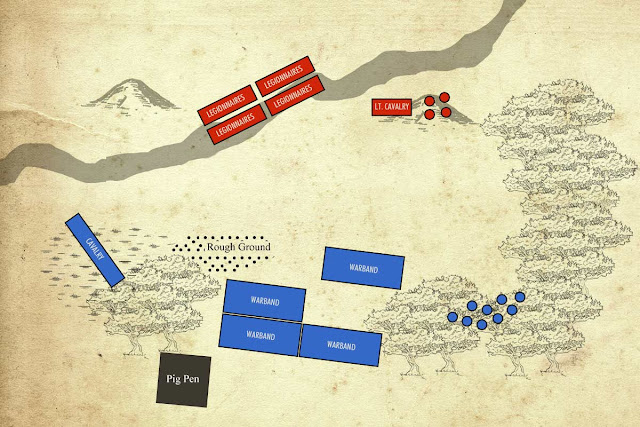 With my infantry stalled in the river, and seeing the Celt cavalry moving into my flank, I was concerned  my heavy infantry would be hit in the side as soon as they crossed the river. The only hope I had of protecting them was to send my Numidians into hand to hand combat with the tougher Celtic cavalry to buy me some time.

I ordered the Numidians into close order and gave them a charge order directly at the Celts. My wife and I discussed charge responses and she decided to countercharge. My Numidians were likely to get stomped, but by countercharging the two cavalry units met at the midway point between them. Directly in front of my Roman heavy infantry.

The dice swung my way and I was able to send my Romans the rest of the way across the river and into contact with the flank of the Celt cavalry.


In the ensuing battle the Numidians managed to push the Celt cavalry back and pursued them to protect the Roman right flank as long as possible. The Romans consolidated and eyed the approaching warbands across the narrow plain. 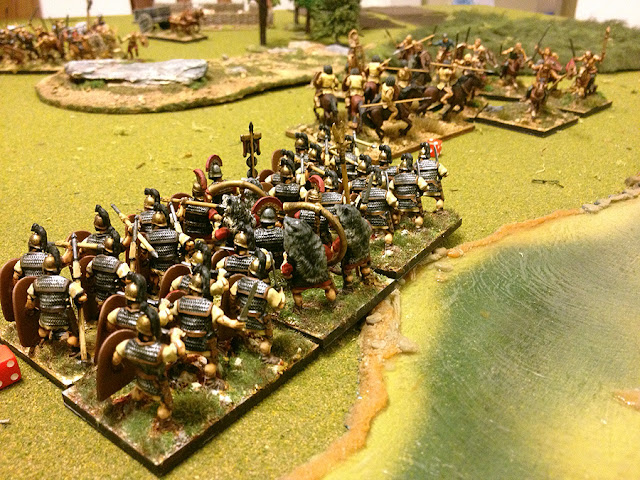 The Celts skirmishers continued to slink along the edge of the woods, while the warbands moved into the clearing and arrayed themselves in a shallow V formation. 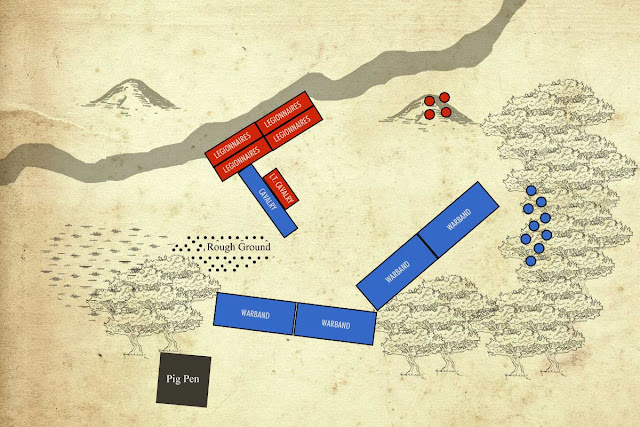 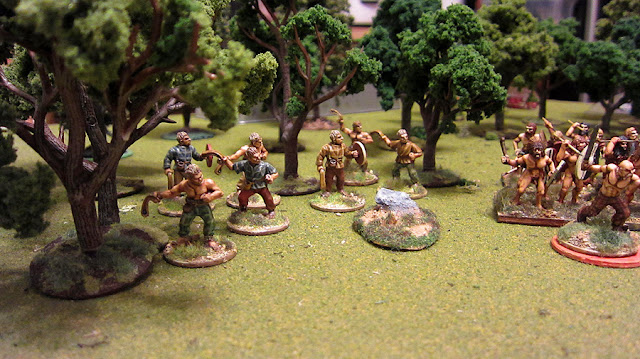 Seeing the warbands getting into position, and not wanting to be on the receiving end of a fully prepared barbarian rush, I decided to risk a full charge. 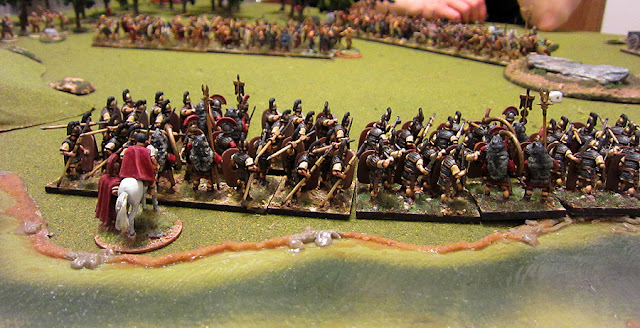 I extended my line, leaving a double depth of heavy infantry on the side likely to take a hit to the flank, and charged forward. The Celts again responded with a countercharge of their own, and unfortunately wound up facing Romans who were fighting atop the hill on the Roman left. I was totally going to let her take it back, but she felt she needed to stop the Romans in the center of the clearing to give her other warbands who hadn't made contact yet room to maneuver. 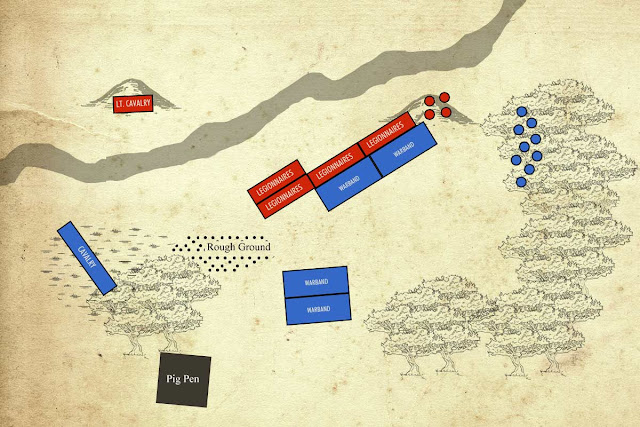 In the clash the Celts took a beating but in managed to hold on during their break tests. The cavalry skirmish between the Numidians and Celts continued, but both sides became Shaken and were forced to retire. 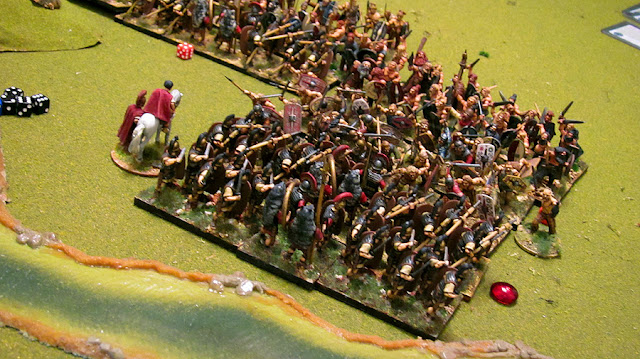 but in the center the Romans persevered against the already bloodied Celts and managed to shatter them. The Roman center used their Move by Victorious Units to swing into the flank of the fresh barbarians.


The furious battle also claimed the life of the Chief Pig Farmer. With more than half of their units Shaken or routed, and their general dead. The Pig Farmers fled the field of battle.

This was another of our small "skirmishes" using only a single division per side this time, but even at this level Hail Caesar is fun. I'm also feeling more comfortable with the rules, even making some rulings on the fly rather than look them up to keep the game flowing.

I still feel like I need a few more units and command stands to get up to the three divisions per side HC recommends, and I'm looking forward to creating some historical scenarios, or some more interesting confrontations based on the old Table Top Teasers.

We're moving house this month and into temporary accommodations until our new home is built. I'm hoping to sneak in one more Hail Caesar game before the move, because in the interim I'll have to be content with painting as most of my game stuff will be in storage. But once we move I should be able to get a new game table, camera, actual lighting rigs, and plenty of time and space to extend my terrain collection. Can't wait!
Posted by John at 1:43 PM