We had a whirlwind of gaming and I fell behind in my Historicon updates. Friday was good, a leisurely morning in the vendor hall, a fun Lord of the Rings game, and our first try at World War II naval action. There were also tons of great looking games I only managed to snap some photos of.

Pics and thoughts after the jump!


This was the first modern naval game I'd ever tried. In an alternate history, the U.S. is tipped off before the Pearl Harbor raid and manage to get most of their fleet to sea. Our Japanese fleet, having done minor damage to Pearl are steaming back to Japan when thy run into the main U.S fleet sent to stop them.


After a bumpy start the game really picked up once we started rolling dice. We managed to cripple a good chunk of the U.S. fleet, but after losing a carrier and the bombers freshly armed on her deck, and with Enterprise making an appearance to our rear, the game was called in favor of the Americans. The "War at Sea" rules and miniatures are part of the "Axis and Allies" miniatures line. Mike and I liked them, and will probably keep an eye out for them on eBay.


"Ruins of Karna", Lord of the Rings

Our second game was used GW's Lord of the Rings rules. I'd played them once or twice since they were published, but was incredibly rusty. Luckily gamemaster Del had the rules down pat and could run the whole scenario from his head so we could focus on individual tactics.


Our orcs and Haradrim ambushed an expedition of elves, dwarves and men en route to plunder the necropolis of Karna. The unquiet spirits of that doomed city made an appearance and provided an extra complication to be wary of. Once we positioned ourselves and came to blows we managed to tear through one warband, but having suffered heavy casualties in the battle we were unable to break the Gondorian shield wall. Fun game and a good group!

The ruins of Karna themselves were being played by Jerusalem which was in the process of being prepared for a later Crusades game. I had a lot of time to take a look at the set up and it captured my imagination. The terrain and miniatures were everything I love in a game -- detailed, unique, lots of table scatter, and color schemes that tied units together. I took the opportunity to snap a bunch of reference photos for my own project. I had a ton of questions (who makes all of the market goods and stalls? Who are these bald warriors? Is this red and black muslim unit accurate or artistic license?) but we had to jet to our next activity. 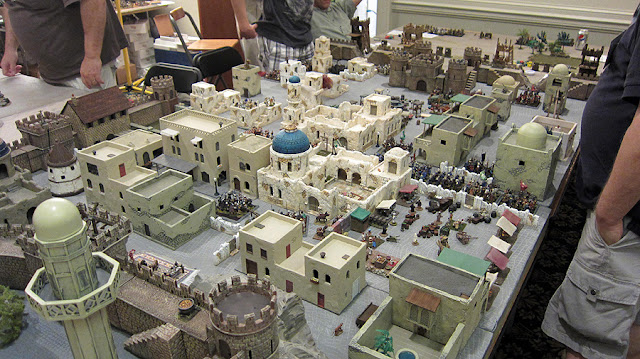 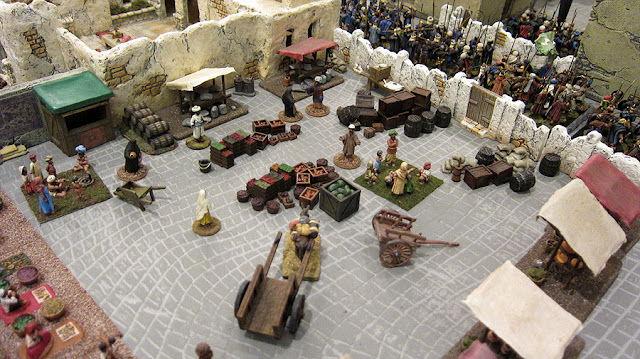 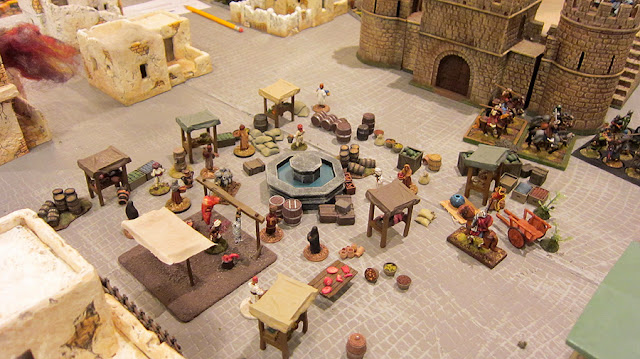 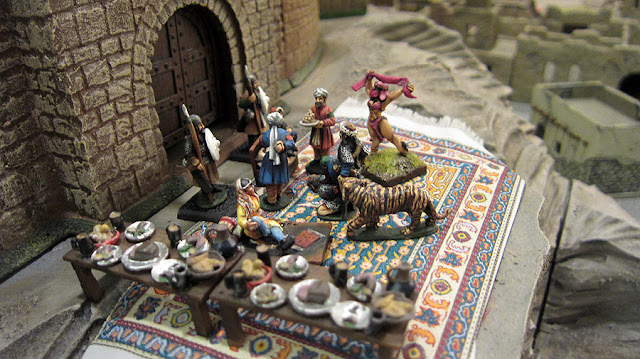 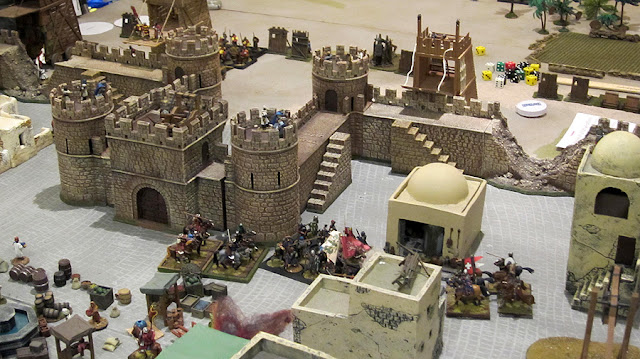 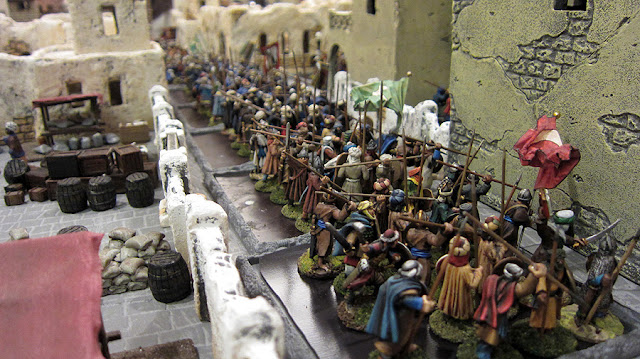 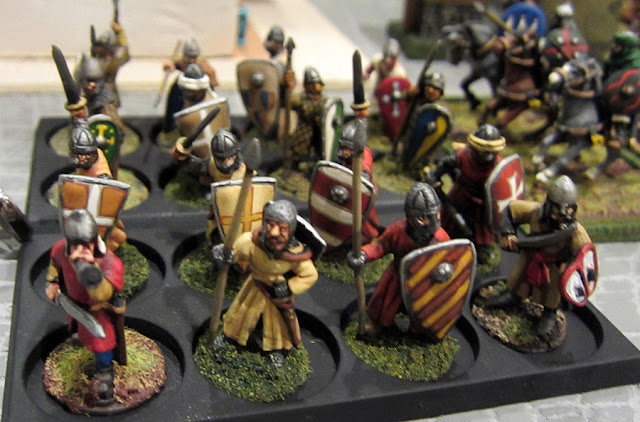 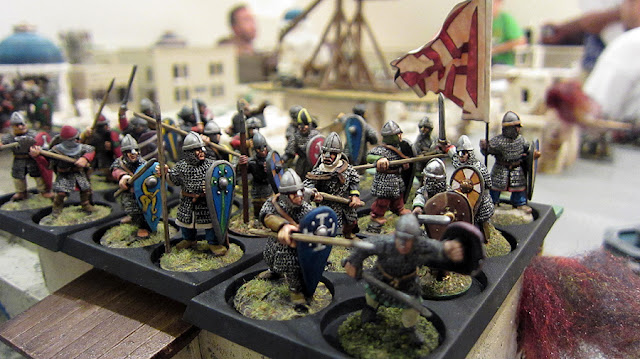 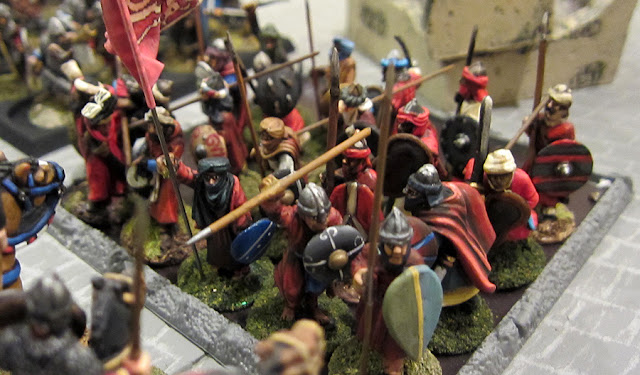 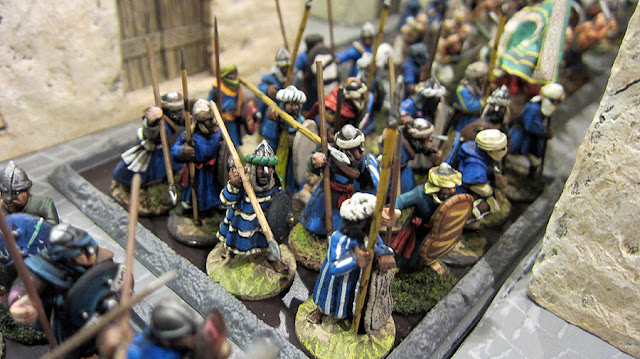 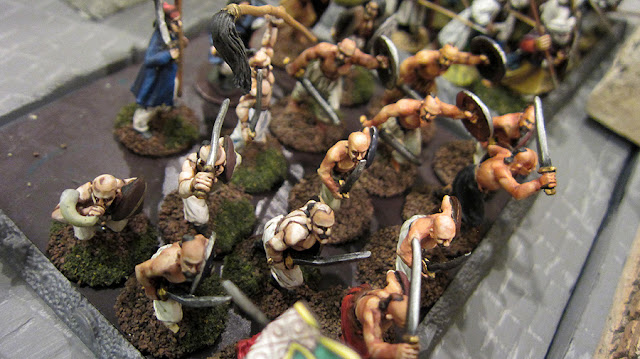 I signed up for Miles Reidy's Black Powder game the following day, but I managed to stop by and check on the preliminary skirmish on Friday. Really impressive terrain! 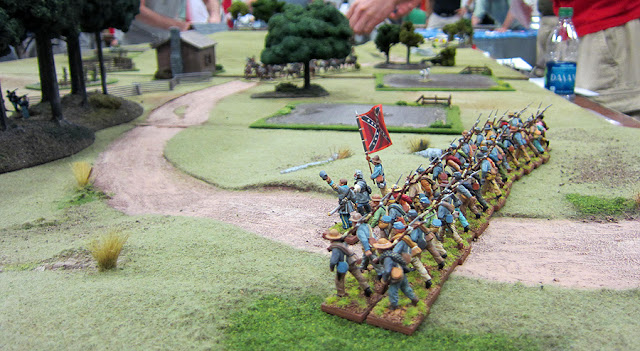 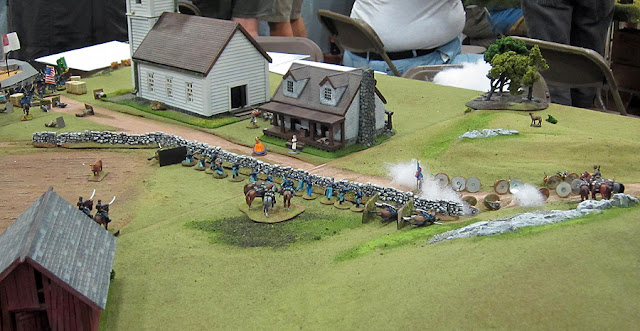 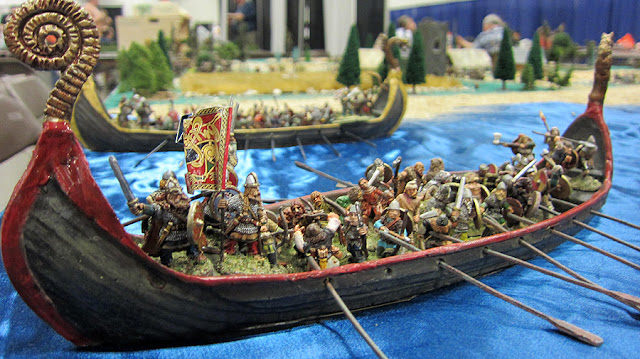 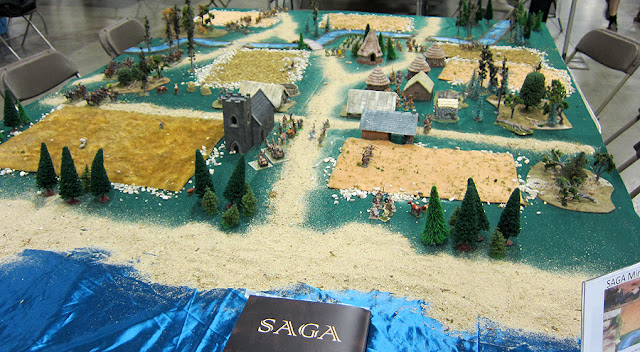 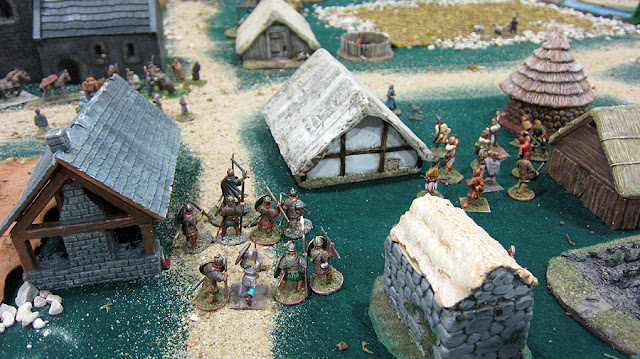 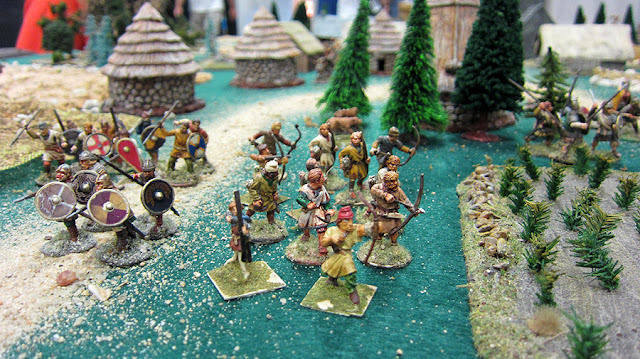 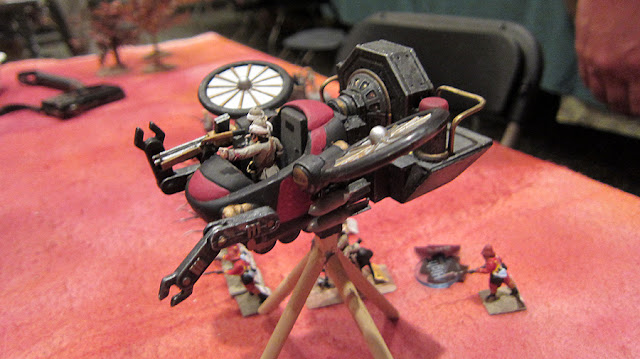 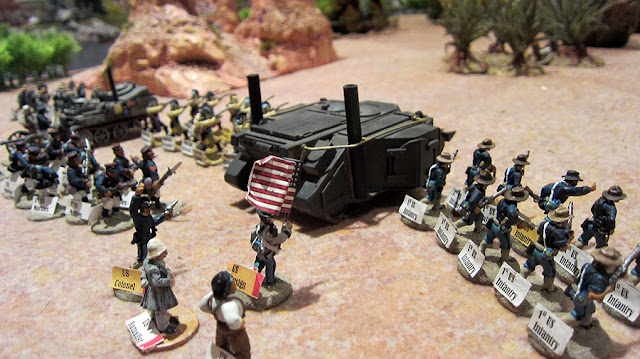 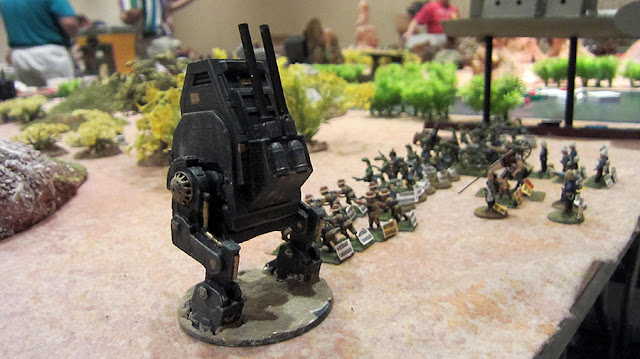 BIG Games
I found a few large scale games with 40 or 54mm figures. Photos can't quite capture the spectacle. These were really cool to see in person. 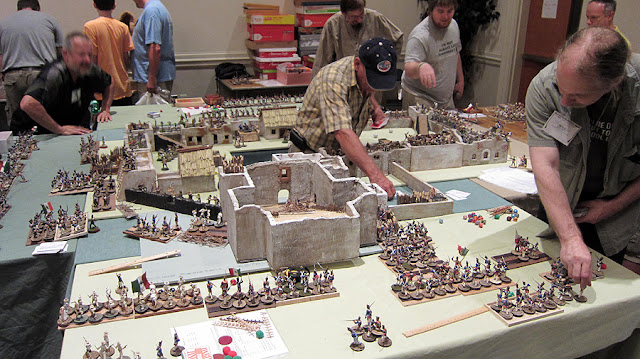 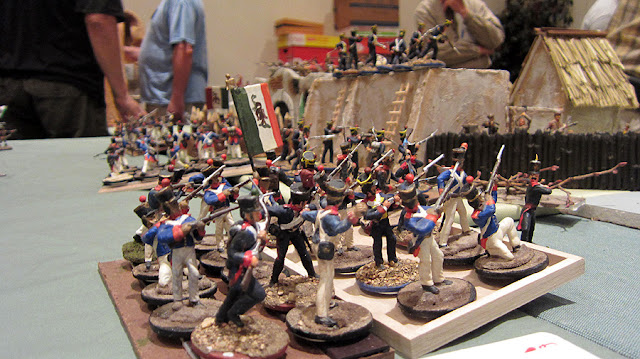 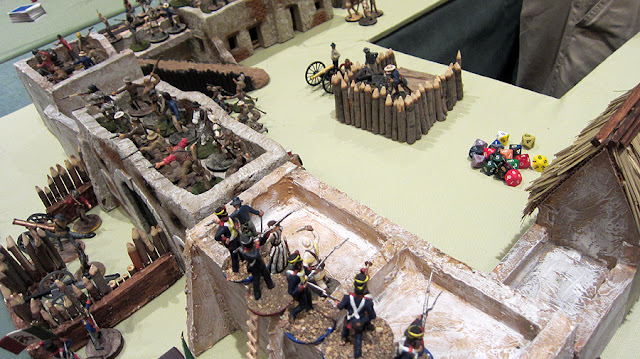 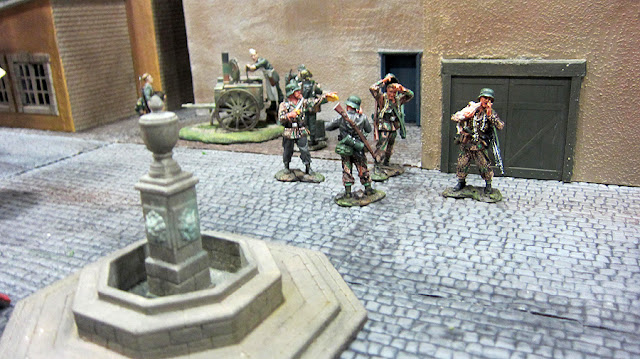 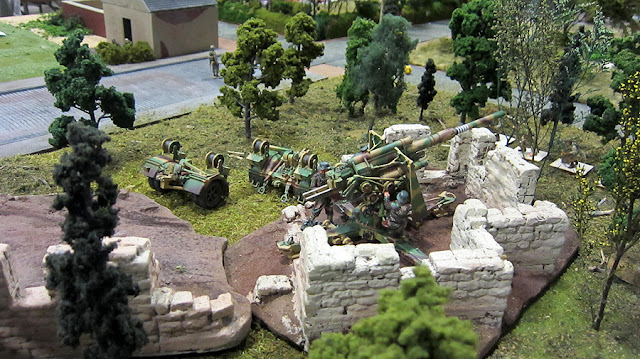 So many great looking games. Here are some I found most unique. 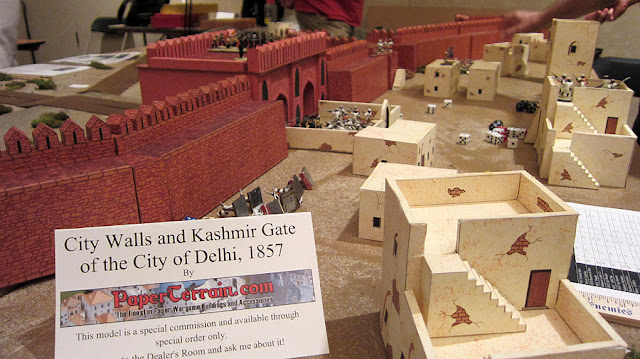 All in all a good day with more to come tomorrow!