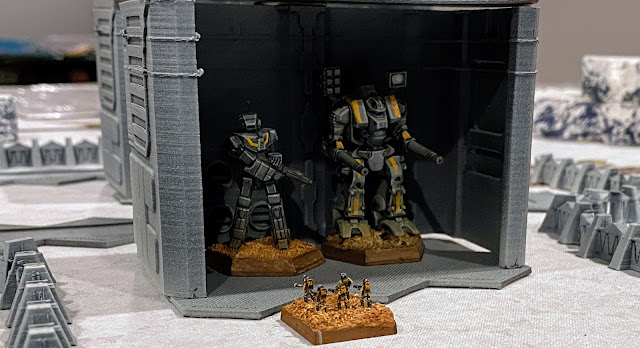 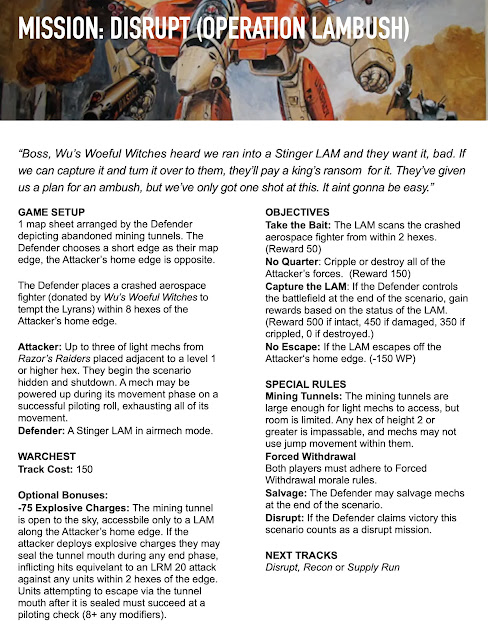 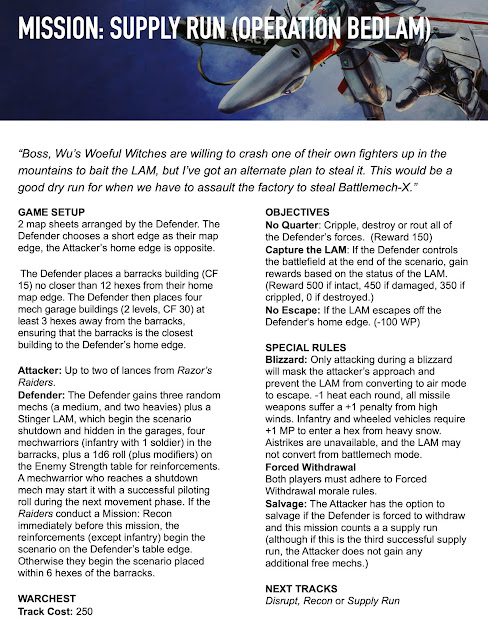 While I presented both missions to my son right after his merc company's encounter with the LAM, my son has been focused on making sure he would be in the best position to succeed. He's undertaken numerous supply runs to build his forces, disrupt the Lyran ability to counter attack and conducted a final recon mission to give him the best chance of capturing the LAM. But with food supplies of his on-world guerrilla supporters running low, he had run out of time for further preparations.

Wary of sending light mechs into the tight confines of old mining tunnels, he opted for his XO's suggested tactic of attacking the LAM hangar during a blizzard in the hopes of capturing it before the local forces had time to react. 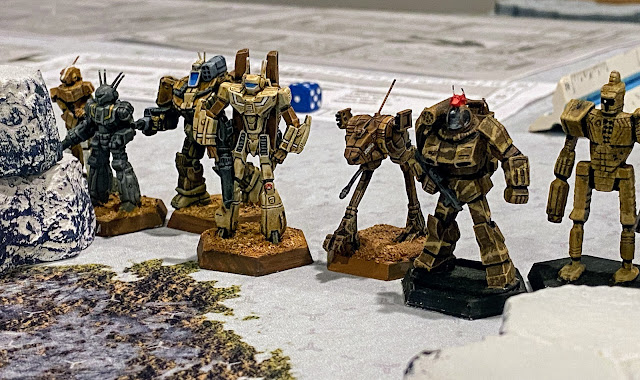 Knowing the heavier mechs of their Command lance would have little hope of catching the Lyrans in time to prevent them from powering up their mechs, Captain Razor opted to deploy his Recon and Battle lances under the command of Lt. "Slick" Exof piloting his venerable Centurion battlemech.

As the eight mercenary mechs slogged through the deep snow, buffeted by high winds, they could just make out the looming gray shapes of the Lyran mech hangars through the snow that pelted and skittered across their canopies.

"There it is." Sgt. Maple called out over her Phoenix Hawk's comm system, "Let's just hope all the picket system arrays we knocked out didn't pick us up on approach."

Lt. Slick checked his sensor array according to standard protocols and noticed a seismic reading beyond the mech hangars to the west.

"I've noticed a seismic reading beyond the hangars to the west," he informed his lances, "Kiwi, Tag, come with me to that ridge to the north. The rest of you make best possible speed to the mech hangars before we have to face whatever's coming." 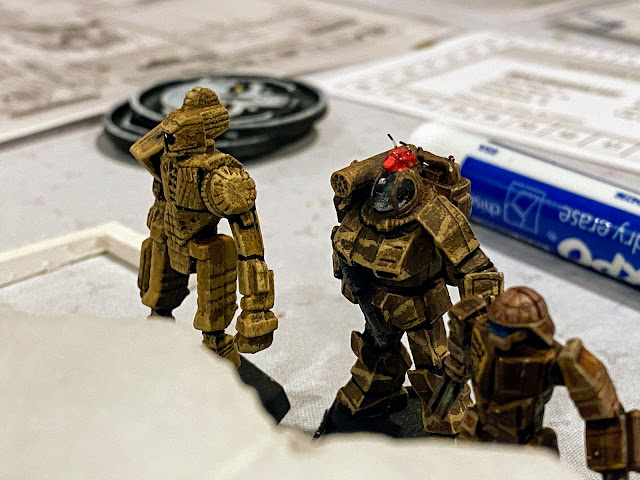 Using the cover of the mech hangars, the Recon lanced dashed towards their targets but were suddenly illuminated by spotlights from the building's eaves. 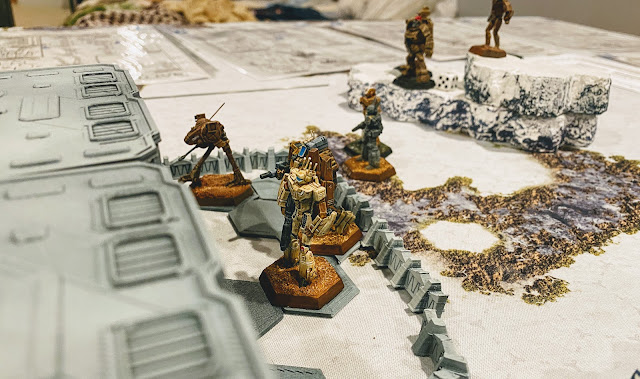 "Sod it, we're spotted!" Sgt. Bone groused as he peeled off from the Battle lance, Cobra's Wasp close behind. Alarms began to sound from the Lyran compound as the merc company vaulted over the low anti-tank wall that ringed the hangar complex.

Sgt. Cooler spurred her Locust into a sprint and rounded the north edge of the hangars. "Lieutenant, I've got eyes on our seismic bogies. A Commando, pair of Strikers and a pair of Scorpions." "And it looks like we've woken their mechwarriors up. I've spotted four people dashing from the barracks in nothing but their skivvies and neurohelmets along with at least a company of machine gun infantry."

"Life's cheap." Sgt. Maple began.
"BattleMechs  are expensive," Cooler finished the popular slogan. "Weapons hot." Her Locust's machine guns sprayed the fleeing mechwarriors who managed to dodge the fusillade, but the green beam of her medium laser caught one of the enemy pilots vaporizing him into a cloud of ash. 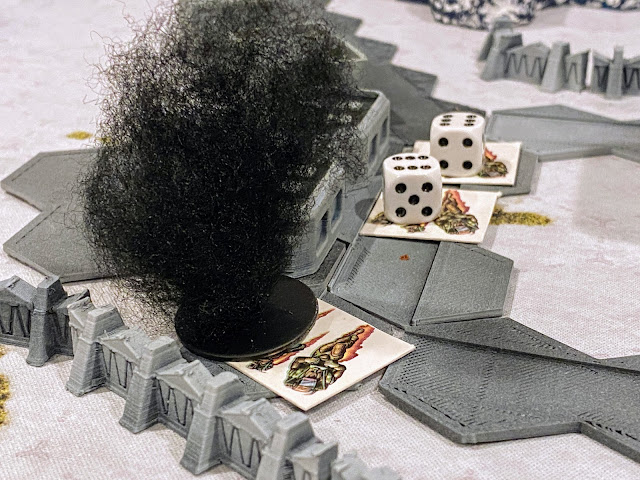 With the thunderous footfalls of half a dozen mechs shaking the ground, the Lyran infantry deployed to meet the assault. If they could hold off the mercs long enough for their mechwarriors to reach the hangars they might have a chance.

Weapons fire from a mercenary Wolverine decimated one of the Lyran infantry platoons as they desperately fired their heavy machine guns at the attackers. 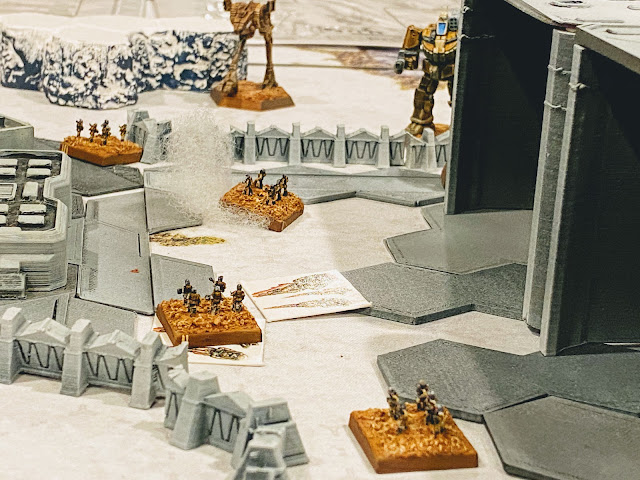 Sgt. Bone instinctively weaved to the left as a pair of golden tracers sliced towards him from a rise to the west. 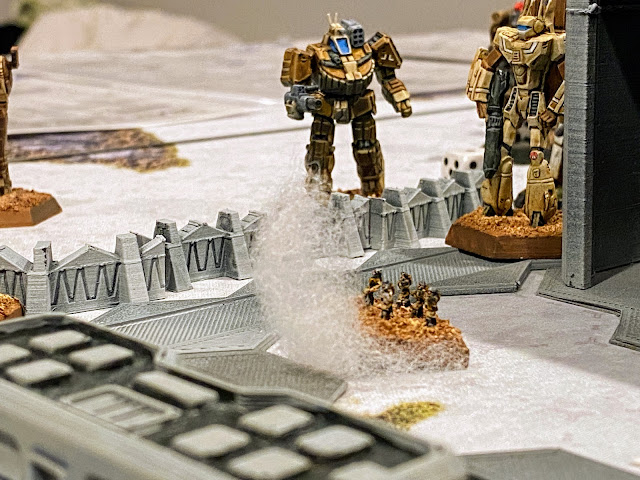 "Continue to press the attack. Concentrate on taking out those mechwarriors Cooler spotted."

A volley of LRMs shot past Bone's Wolverine as the Strikers drew within range. Hidden behind a low hill, the Lyran tanks fired indirectly with targeting data from their allied Commando who was spoiled for targets to call. 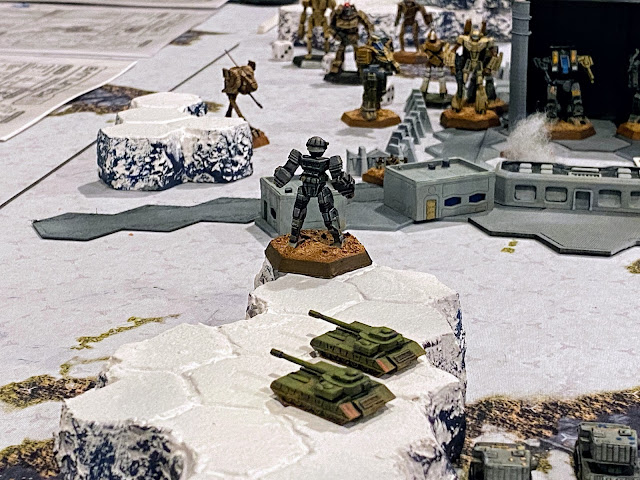 The Lyran mechwarriors dashed towards the hangars, now just thirty meters away. The mercenary mechs waded into the midst of the Lyran infantry, heedless of the danger in order to direct all fire at stopping the enemy mechwarriors. 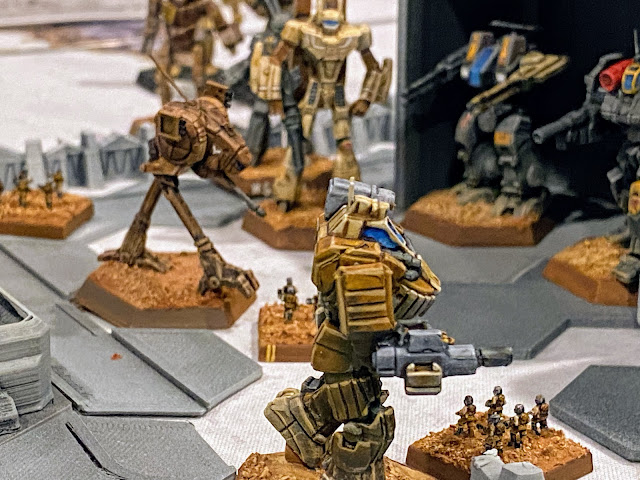 Desperate to save their comrades, the defenders of House Steiner accelerated into short range of their mercenary enemies. 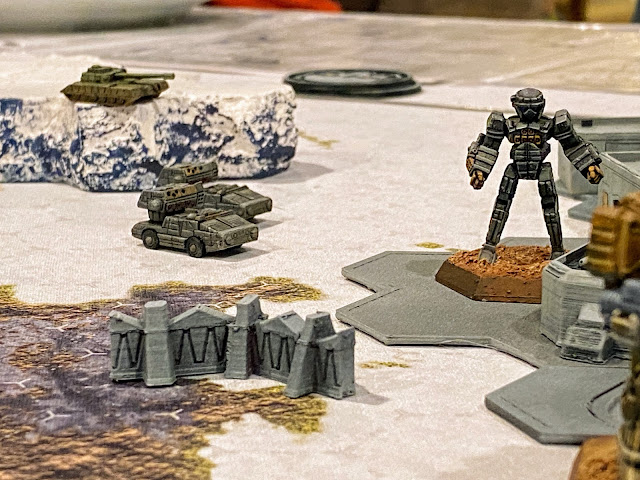 Sgt. Bone hit the emergency brace button on his modified control panel, forcing his Wolverine to take a wide stance as volleys of missiles exploded across the rear armor of his BattleMech. His own SRMs peppered the tarmac around the last fleeing mech pilot, the unfortunate warrior pinwheeling through the sky as explosions lifted his body into the air. Steadying his mech he surveyed his comrades to see the House Steiner Commando launch an alpha strike at Cobra's Wasp, a cavalcade of missiles explosions shearing one of the lighter mech's arms off.

"Mechjocks are down," Bone growled, "Knock out the resta these boys 'fore they scratch the 'tenant's paint job." 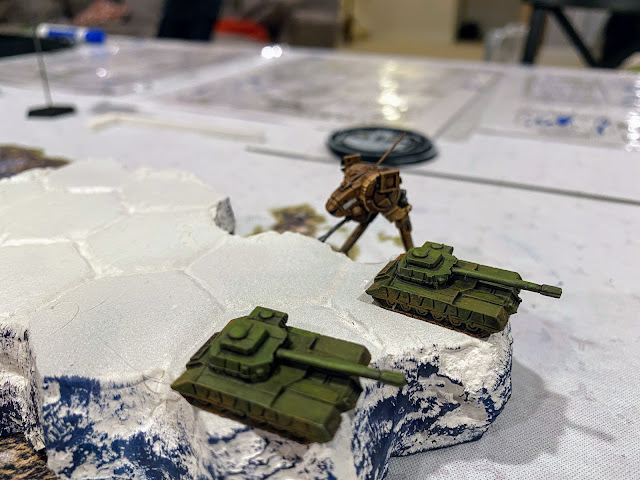 Acknowledging the sergeant's order, Cooler dashed her Locust into the rear arc of the Scorpions. 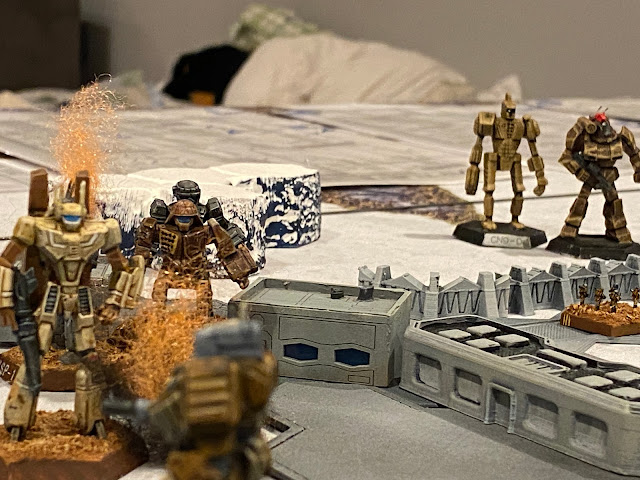 With their hopes of mech reinforcement dashed, the Lyran vehicles began reversing away from the mercenary mechs that now turned their attention to them. 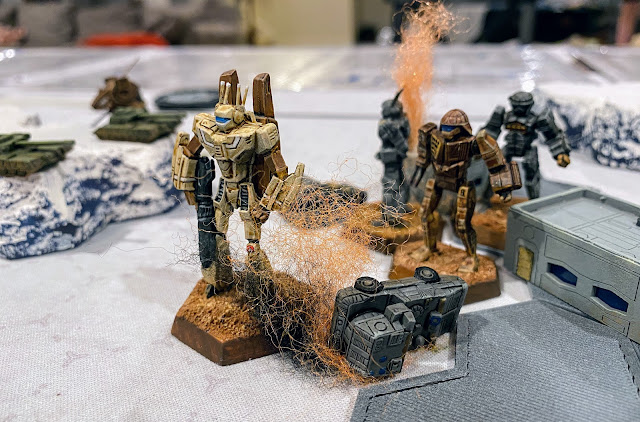 Maple's Phoenix Hawk lead the charge, slicing glowing chunks of metal from the Striker tanks with medium and large lasers. A swift kick from Tag's Trebuchet flipped the light tank onto it's back before it shuddered and ripped itself apart from internal ammo explosions.

With comrades advancing, Cobra jumped his Wasp behind them to shield his damaged mech from fire spat by the retreating tanks. The Lyran Commando followed, it's short ranged missiles blasting the Wasp's other arm free from the battlemech's torso.

"Can't take much more of this!" Cobra exclaimed over the company comms channel.

As the Commando broke free from the pack of mercenary mechs and peppered the rear armor of Tag's Trebuchet with another volley of SRMs, a lone Stinger emerged 'round the mech hangars to the south. 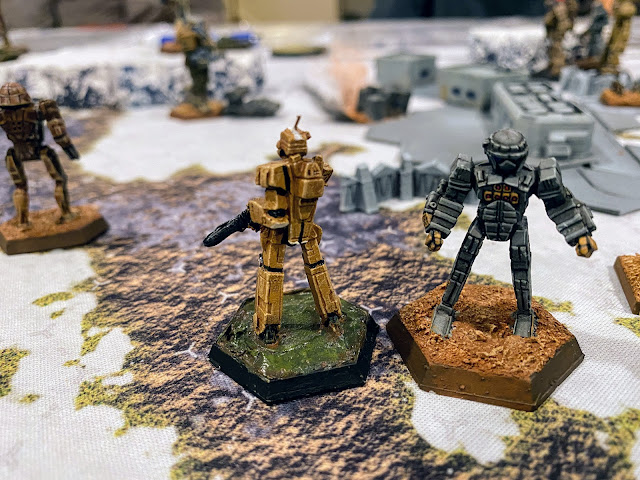 Having sat out most of the battle in a deep defensive position, Hoover's Stinger was in a perfect spot to cut off the Commando's retreat. A precise strike by its medium laser and machine guns obliterated the last internal structure of one of the Commando's damaged legs, sending it face first into the tundra. 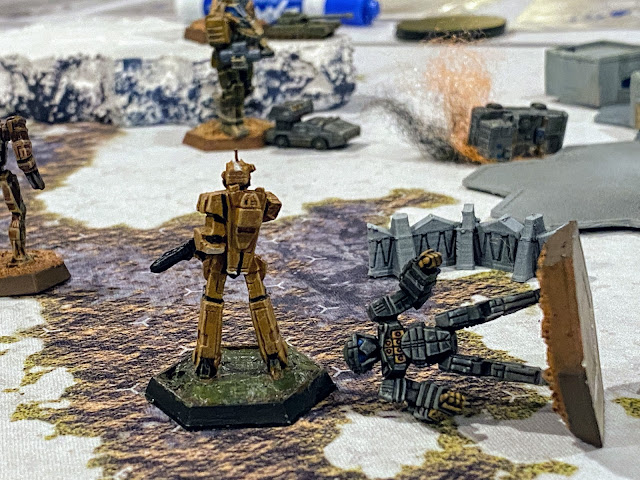 With the final Lyran mech down, and mercenary mechs crushing fleeing tanks under foot, Lt. Slick radioed back to base.

"LAM secure Captain. The field is ours." While this was a fairly lopsided battle in favor of the mercs, it really came down to one or two rolls. I had initially offered this mission to my son when he was sporting half repaired, undergunned mechs and novice mechwarriors. Rather than take my bait, he bid his time, building his forces, accumulating stockpiles of spare parts and giving his mechwarriors time to advance from regular to veteran pilots.

With all that, he still exhausted his entire reserve of supply points to even launch this mission, and several of the Lyran mechwarriors were at the door to the mech hangars which would have brought a Warhammer and Stinger LAM into the fray.

Not only did he claim the Stinger LAM to turn over to Wu's Woeful Witches, my son secured three additional battlemechs in pristine condition for his mercenaries: a Griffin, Rifleman and Warhammer. And not a moment too soon, as his scouts have already identified numerous heavy and assault battlemechs guarding his final target: the mech factory complex housing the mysterious Battlemech X he's been hired to steal.