Beautiful Figures.. Now How Do I Get Them Into My Army?

I've seen a few new figures showing up on various manufacturers' websites that I think are just gorgeous. I'm committed to the Punic Wars and Late Republic eras currently, but I'm hoping to find a way to work these figures into my armies.

These are Aventine's new mailed phalangites.  From my understanding even Hannibal's "phalanxes" during the Second Punic War were using spears roughly 9 feet long, about half the length of classical Greek and Macedonian phalanxes. Still, I love the look of massed ranks of a phalanx.  I'm thinking of using these new mailed phalangites with short spears as some of Hannibal's African veterans, or using painting them up as Pyrhic phalangites and using them as proxies in a Carthaginian army for the time being. 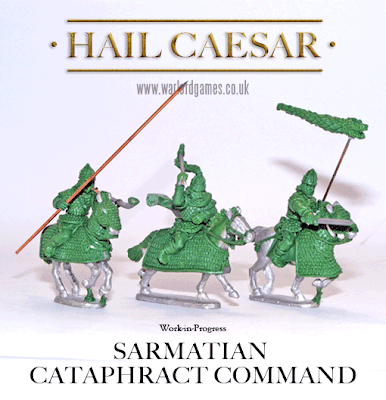 Next up, Warlord just announced a new plastic Sarmatian cataphract set. The ready availability of plastics is one of the prime reasons I decided to jump back into 28mm for my ancients, but I haven't been entirely satisfied with the plastics so far. Wargames Factory tended to have the more realistic poses I like, but the recent takeover by some apparently unsavory folks have left me unwilling to purchase from them.  Warlord seem to have better sculpts, and I like the actual company, but their Romans always looked beefy and odd in photos, and their Celts tended to flail their arms and thrust out their chests a bit too much.

These new Sarmation cataphracts on the other hand look delicious.  Cavalry with barding look great painted up, these poses aren't quite as wild and woolly as their Celtic cavalry, and they'll be plastic! Affordable and easy to modify. Really looking forward to picking some up.
Posted by John at 12:53 PM