I've been playing a lot of Star Wars Armada lately.  Easy to learn, enough decisions each round to keep interesting, local opponents and c'mon, "STAR WARS", have made it my go to game this summer. The paint jobs on the capital ships look good enough for play, but the bare plastic fighters were driving me nuts each time I got them on the table. I finally found some time over the long weekend to rectify that. Painting tips and pics of my first batch of Rebel starfighters after the jump.

First I assembled my resources. The scale modelers that attempt to recreate "screen accurate" models have put together quite a few photos of the actual ILM models as well as their own replicas that I used as reference. This might be overkill for ships only half an inch long, but as a historical gamer I enjoy this kind of research.

I read Steve's tutorial on Outpost Zero, but wasn't comfortable painting on bare plastic. I don't think he has had any issues with paint flaking, but I decided to go with some primer just to be sure.

After a coat of gray primer I started with a base of Vallejo Bone White. It came out a bit more yellow than the paint jobs in the reference photos so I picked out the raised surfaces with a mix of Vallejo White and Pale Gray. I like the mix of off white tones but the initial Bone White might be an unnecessary step.

Certain parts of the X and Y wings are slightly darker gray on the studio models. I painted the X-Wing engines dark gray as well as the Y-Wing's main fuselage. With base coats down I got to the fun part of adding unit markings. I referenced the studio models again, but at this scale a lot of the detail is naturally lost. 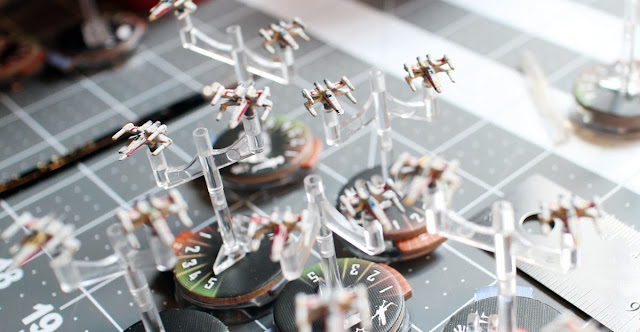 Each X-Wing received a stripe of red along the nose and the N shaped "Red Squadron" mark on the wing. Red Squadron is also supposed to get a number of lines on each wing to indicate its number (Red 2 gets two stripes, Red 5 gets five stripes, etc.) Red 6 through 12 are supposed to divide some of those stripes in half, but at this scale that level of detail was beyond my patience. I gave Red Leader through Red 4 the appropriate number, but Red 5 and above got just five stripes per wing.

Most of the cockpit canopies are a light blue, except for Red 4 (yellow) and 6 (red). I tried to match the additional red and yellow panels seen in the studio models too. Finally they all got a wash of Army Painter Strong Tone to pick out details and make them look like roughed up Rebel fighters from the film. 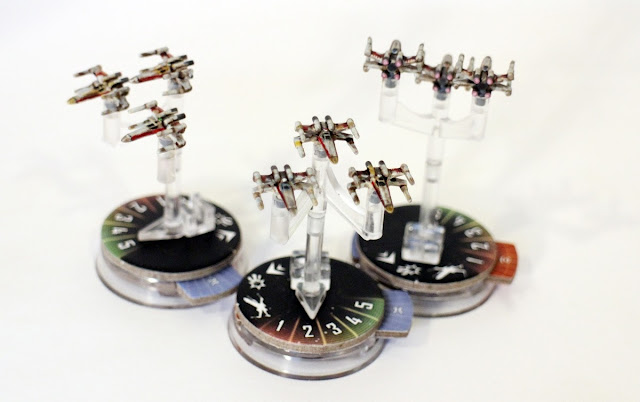 The differences between the various Y-Wings of Gold Squadron were more subtle than the X-Wings so they all got identical paint jobs. 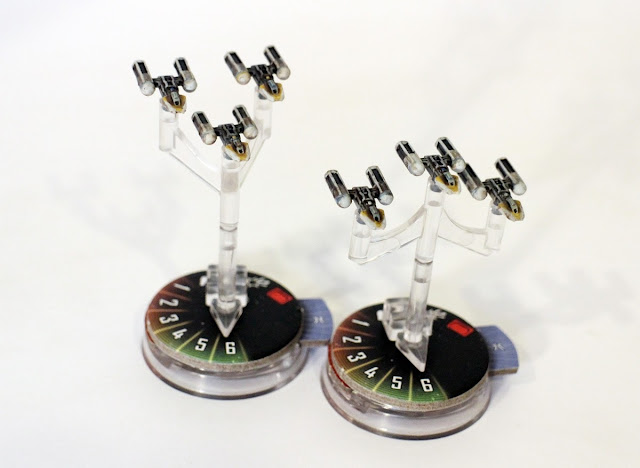 Trying to match the studio models is probably a bit too rivet-counting for this scale, but I had fun. I've got another batch of Rebels in the form of A-wings, B-wings, a small flight of X-wings and with the impending release of the Imperial Star Destroyer I'm going to have to get my TIEs in shape as well. And naturally, now that they have slick paint jobs I expect their performance to drastically fail on the actual table top!
Posted by John at 10:39 AM