Easing back into painting with Reaper Bones Beetles

We're moved in, the holidays have wrapped up, but I'm still unpacking and setting up our new house. Happily, I managed to get a bit of painting done: a pair of Reaper Bones beetles. Not too impressive, but it's nice to be able to get back to the hobby finally.

So are "games for New Year's Eve" a new tradition or something I've just aged into? My son insisted on a game of Smash Up after I got home from work on the 31st (pretty fun game, although I haven't figured out the trick to getting the Wizards to be useful yet). After we wrapped up, we piled into the car and went to a family party (kids downstairs, 'rents upstairs) where various party games were broken out. After we returned home to put our boy to sleep, my wife and I broke out "Command and Colors: Ancients" for its inaugural game, finishing up just before the ball dropped.

The next day I joined my buddies for our 2nd annual Axis & Allies game. Checking my various social media feeds after getting home I saw tons of game playing across the board, even by people who aren't "gamers" per se. Even a bunch of coworkers broke out Catan and Cards Against Humanity for the New Year. Is this a trend, or is everyone I know just old and ditching the drinking (and subsequent hangovers) for quieter pursuits? 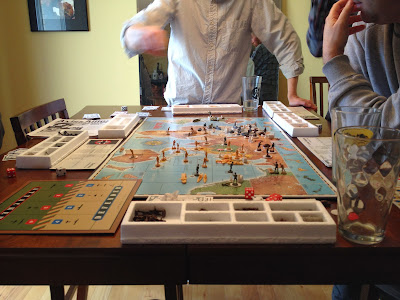