I picked up a mixed bag of miniatures from someone offloading their collection on TMPs auction board. The price was pretty good, and since I'm trying to bulk up my hairy barbarian hordes I thought the "30 Gauls and Germans: Gripping Beast, Old Glory, Black Tree, and Foundry" would offer me a great chance to get a sample of the various vendors before committing to a large mail order.

Beautiful Figures.. Now How Do I Get Them Into My Army?

I've seen a few new figures showing up on various manufacturers' websites that I think are just gorgeous. I'm committed to the Punic Wars and Late Republic eras currently, but I'm hoping to find a way to work these figures into my armies.

Didn't make a lot of progress on wargame stuff this weekend. Reglued some Numidian spears that came loose (can superglue go bad?), primed them again, built a few Roman command figures and blocked in some Germanic command.  While I was puttering out with that stuff I did catch a documentary on Cleopatra's sister Arsinoe.  I like the Roman civil war era (Julius Caesar! Pompey! Mark Antony! Octavian!) but the actual battles of of two primarily Roman armies facing off aren't as interesting to me.  I like asymmetric forces, so the mirror battles of legion vs legion don't stoke my enthusiasm. I've been toying with the idea of running a hypothetical "Cleopatra at War" game, where Antony and Cleopatra forgo a naval battle for a land engagement against Octavian. The documentary highlighted a battle I hadn't been aware of though, the Battle of the Nile in 47 BC. Here's how it went down:

I needed to paint up the shields for my ancient Germans, and decided to do a bit of background research to pick color schemes and patterns that at least gave a nod to historical accuracy. Here's what I discovered. 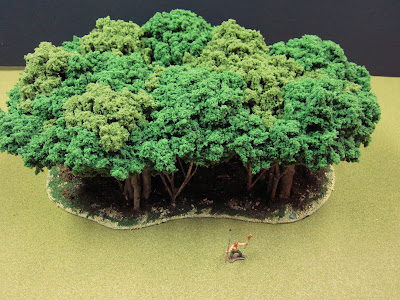 Finished up my "megawood", a huge stand of dense trees to fill a large portion of the table.  I based the design on a combination of techniques from Architects of War and other tutorials for similar woods with removable canopies.


I had an epiphany a few years ago. For all the time we spend painting, detailing and basing our miniatures, most of a wargame's playing surface is covered by terrain rather than figures.  I think it's a shame to see beautiful figures battling it out on top of some ratty green felt and half a dozen crummy model railroad trees.

I really get jazzed about beautiful set ups - wargames that look like dioramas with terrain that matches the figures in aesthetics. My first order of business when I got back into wargaming was to upgrade my terrain. I found out that I may have had some figure painting skills built up over decades, but when it came to terrain I was clumsy novice.


I spent a lot of time digging up information on the intricacies of basing for ancient and medieval wargames, only to find that there is no single good solution to the problem. Here's the deal. Decades ago, wargames were designed primarily as simulations. Each figure represented a certain number of soldiers, each inch of the board corresponded to a precise number of real world yards, and the bases the figures were affixed to were supposed to take up the proportional amount of area that those troops would take up on the real battlefield.  During the 80's bases got standardized to fit the most popular set of rules at the time: DBM/DBA. Since then most of the other games that came out to compete with DBM/DBA used their conventional basing for multi-figure stands since nobody wants to rebase all of their figures just to try out a new set of rules. Recently several rules sets have been published that play a little looser with the sizes of multi-figure bases, either using larger or smaller bases, or getting rid of explicit base sizes altogether in favor of proportional bases sizes.

I want to avoid having to rip my figures off their nicely textured bases in the future, but settling on a single type of base size has been tricky. I really like the look of very large bases, 120mm x 60mm that use fewer figures and allow the miniatures "to breath". I've seen this referred to as "Impetus basing" after the popular Impetus rules that use it as their standard basing. I've also been reading the new Hail Caesar rules, and while the authors state time and again that any basing type will work, they use 40mm x 40mm bases and group several of those into units. Because units need to disperse into open order (usually shown by spreading the bases apart so there is a gap between the various bases within the unit) in order to move through woods or rough ground, I think this is something I'll need to take into account. And then there's the venerable DBA/DBM rules that use bases 60mm wide that are still suggested in wide range of rules.

I'm pretty pysched to try out Hail Caesar, so currently I'm leaning towards 40x40 basing but I'm not quite settled on it. I may need to just stick the figures to temporary bases to try out the rules and see how it actually feels moving the various base sizes around during a game.