Just a quick post to share my finished arab archers. These figures will get sabot bases similar to my berber spearmen, but I'm waiting until my Silfor desert tufts arrive from Scenic Express to finish the sabots. 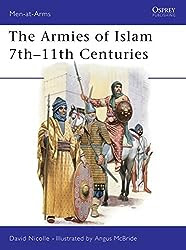 I wanted to keep a subdued color palette to blend with the neutral tones of my berbers, but I couldn't help but give these archers a bit more color. I settled on a color palette inspired by the cover of Osprey's The Armies of Islam : 7th-11th Centuries

. The figure in the foreground of the cover has a warm yellow robe and blue head scarf that I quite liked. Coupled with the earth tones I used for the berbers (namely Vallejo Beastly Brown

and a mix of Sand and Spicy Mustard

) the overall effect should be fairly cohesive for the finished army.

I took the plunge into an arab army for the upcoming crusades supplement for SAGA with some berber tribesmen by Gripping Beast. I'm not settled on a color scheme and my knowledge of the muslim armies of the 11th and 12th centuries is very shallow, but I was itching to get paint onto some figures. I really like the look of these tribesmen by Gripping Beast, and I think they're generic enough to be pressed into service anywhere from Moorish Spain to the Levant, at least until I flesh out my arab armies with more theater specific figures.

Besides SAGA, I also intend to use these figures for mass battles. Although individually based on washers, I created a few sabot bases for them as well. I intended to mount four of them to a 40mmx40mm base, but they were jammed in so tightly I switched to 60mmx40mm bases.

To help keep the figures attached to the sabot base, I laid down some magnetic tape on top of the rectangular base.

On top of the magnetic tape, I glued some 2mm foam sheet

that had circular openings cut out to accommodate the spearmen's bases.

Both the spearmen and sabot's received similar texture and paint to help the bases blend together.

The Gripping Beast figures are decent. I quite like the robes and head scarves, but the detail on their faces was quite tricky to make out. Overall I'm pleased with how they turned out, but I'm eager to compare them to the new plastic range they've just released.
Posted by John at 9:34 PM 10 comments: