I've decided to impose a moratorium on figure painting in October for myself in order to make progress on a  number of other projects that have been on the back burner.  Racing to hit my deadline, I managed to get some Black Tree Designs "Celt Slingers" painted up before the end of the month though.


I didn't think it was possible to wield a shield while using a sling, but a little research on TMP changed my mind. The large oval scutums were probably too unwieldy for skirmishers to carry, and my packs of slingers only came with two small round buckler shields. I shaved off the mounting knobs from most of the slingers, saving the bucklers for the two poses who I thought would look too odd without a shield in their off hand.


I also gave my Army Painter dip another try, thinning it with mineral spirits and using the very thinnest of coatings to accent the shading I had done and give a final protective coat (since these figures will likely be picked up by the figure rather than the base). The dip still came out thicker than I had hoped, though it wasn't quite the disaster that befell my Cretans. I think I may have just received a bad batch of dip if such a thing is possible, since it isn't behaving the way my previous tin did.

The slingers are decent sculpts, not quite as nice as the BTD Ancient Germans, but serviceable.
Posted by John at 10:00 AM 1 comment:

The event listing for the various miniature wargames being run at this year's Fall In was posted, and just like with Historicon, there are far too many games I'm interested in playing. At best we'll be going up Friday around midday and catching some afternoon and evening games, with a full day of gaming on Saturday and heading home on Sunday. I'm intrigued by this year's theme, the war of 1812, but I'm concentrating on getting in games for periods I have a real love for: Ancients, Medieval, and World War II, as well as a smattering of sci-fi and fantasy wargames. My top picks for Fall-In 2012 games after the jump.

The Best of the Hail Caesar Yahoo Group. September 2012

Lots of good discussion this month as folks return from vacation and get back to waging war with tiny armies. It was hard to pick the best post of the month, so here are a few of my favorite highlights.

I particuarly liked shaoloongyin's thoughts on modeling the unique nature of Pyrrhus' cavalry. The encouragement of the designers for players to hack the rules to best fit their vision of history or playability is one of the things that I really like about Hail Caesar and the HC community. I'll quote shaoloongyin's thoughts in total, because he's got some neat ideas:

I'd appreciate feedback on the following two approaches that attempt to reconcile historical troop characteristics within the HC ruleset.

At the battle of Asculum, and perhaps elsewhere, Pyrrhus established a reserve line of elephants + skirmishers on the left and right wings and commanded his heavy guard cavalry in the centre. Apparently, he and his cavalry force would dash to wherever the lines appeared weak to either apply command or armed force.

Given this mobile role, it seems awkward to place such a cavalry squad under the distance restrictions of the usual divisional command rules. So, I've decided to use the Marauder rule in such cases, as well as the optional commander-in-chief rule for Pyrrhus.

This way, if he leaves the cavalry unit to lend command to any of his remote wings his guard cavalry will not suddenly be operating as if lobotomised. Though, per the rules, Pyrrhus' guard cavalry would be activated under the command of their original sub-commander in the centre rather than Pyrrhus himself (unless he joins the unit), no? This seems a little strange.

Perhaps it might be better to make them an exceptional division of 1?

Light, javelin-armed Tarentine cavalry apparently favoured riding up towards an enemy, casting their javelins, before riding away in a hit-and-run manner. There is doubt about whether their tactics favoured melee engagement.

Rather than used the 'feigned flight' rule, I've opted to allow Parthian Shot to be used with the Short Range value. The Tarentine javelin tactic appears analogous to the Parthian bow technique, though perhaps without the backwards-firing flourish.

Despite their initially exceptional use of shields, I've also opted to maintain Tarentine cavalry at a 6+ morale save and standard light cavalry, unless someone can offer a more elegant way to simulate this equipment. A 5+ morale save seems too strong.

On a related note, with regards to Pyrrhus' enemy, the Republican Romans, I've toyed with the idea of allowing a manipular swap whereby a supporting second line principes or triarii unit can replace the unit in front provided the frontal unit gives ground in good order. There is thus still some chance for front line units to have their tactics disrupted if their break test puts them in disorder or destroys them outright.


Glad to see the chatter on the Hail Caesar Yahoo Group picking up. With my life being so full of non-game related activities in the moment, it's nice to be able to check in on Hail Caesar even if I can' seem to get any lead on the table.

The last few weeks have been quite challenging for me. Despite not making a ton of progress on wargamey stuff, I did catch a peek at some ancient warfare, albeit in digital form.

A few years ago when progress on my 20mm Punic armies slowed to a crawl, I picked up Rome Total Warfare and played quite a bit of it in hopes of jump starting my drive to finish that project off. I was years late to the party, but I really enjoyed it. Deploying my armies and fighting battles scratched the wargame itch, but I missed the tactile quality of moving figures and the creative aspects of building and painting terrain and minis.

Rome II on the Horizon

Creative Assembly has produced a number of domain management / battlefield simulations in the intervening years from Napoleonics to Samurai, and I just learned that they are returning to ancient warfare again with Rome II. Even with the inclusion of Hollywood style flaming catapult attacks and Omaha beach landing craft, I can't deny that the game looks gorgeous even at this early stage.

They've just released a teaser trailer as well. I'm definitely going to keep my eye on this one, even if I only end up dabbling with the final product before getting back to lead and paint.

With the impending Reaper Madness coming in March, I've been looking for a set of skirmish rules to run some games. After downloading the Song of Blades & Heroes rules I used my son to test out some of the mechanics with his choice of dinosaurs (and various zoo animals). He was thrilled. The boy just loves rollin' dice. Sadly, I think this means he'll be a rabid Yahtzee player. 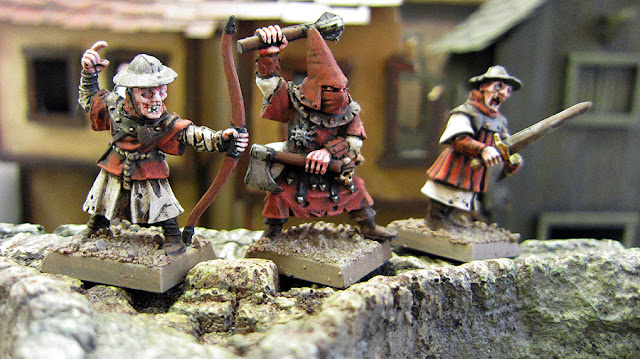 I've been going through my older figures and terrain to cull anything that needs to be junked or sold.  I tried Mordheim, Game Workshop's fantasy skirmish game 5 or 6 years ago but haven't played since then. I'm considering selling off my Chaos warband and Mordheim terrain but thought I should probably take a few pics before I sent them on their way. Please excuse the few bases that didn't get finished off. The whole wicked warband after the jump.


I painted up a unit of Cretan Archers by Black Tree Designs. The sculpts weren't bad and they painted up quickly, but Army Painter quick shade finally let me down. After block painting the archers I brushed on the Army Painter quick shade. It looked a little dark, so I wicked away quite a bit of it and had faith that it would lighten as it dried. Unfortunately when I checked them the following morning, the dreaded goop had remained fairly dark and they needed quite a bit of repainting and highlighting to get them back up to table top standard. 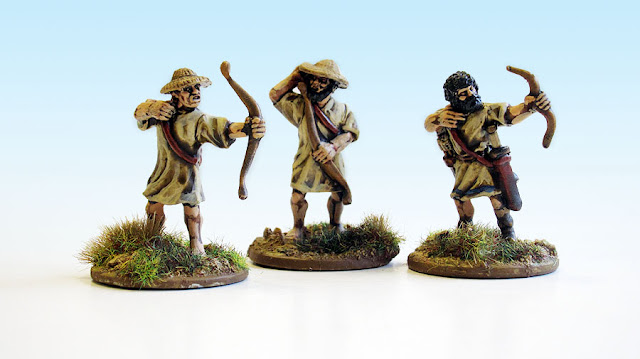 I was concerned that the BTD Cretan Archers were sculpted larger than 28mm standard, but comparing them to a Warlord Games Celt (on the left) and a Wargames Factory Viking (center right) my fears were unfounded.

So while I'd happily pick up more BTD Cretan Archers, I'm afraid the honeymoon is over with Army Painter. I'll still be doing some experiments with thinning it and using it sparingly, but for me, I don't think I can rely on it completely to handle the shading of my figures. 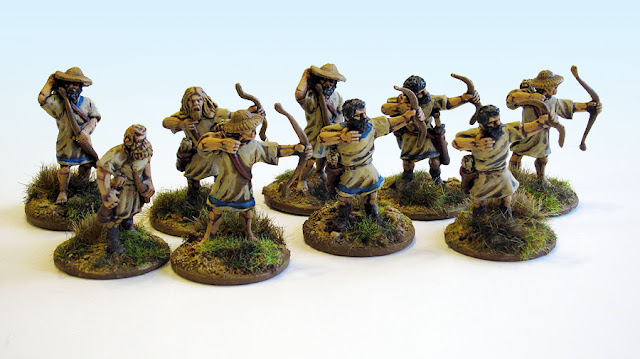 
My soviets are done, but I can't say I'm entirely pleased with how they turned out. I botched the primer and found the mix of colors in the Battlefront Soviet Paint set a little too similar in shade to create the contrast necessary to make these figures. Still it was good to get some 15mm figures under my belt, and these should be fine for learning Fireball Forward and Flames of War.  I may slowly replace these plastics with Battlefront or Peter Pig figures over time.

When I was digging up the control figure for my Reaper Bones experiment I came across a set of fantasy monsters I sculpted myself for the dungeon crawling game my group played about 10 years ago. This was before the advent of WotC's prepainted figures so finding a miniature for the more exotic monsters meant doing it myself.  Of course, my players always told me to "just use bottlecaps", but whata they know... 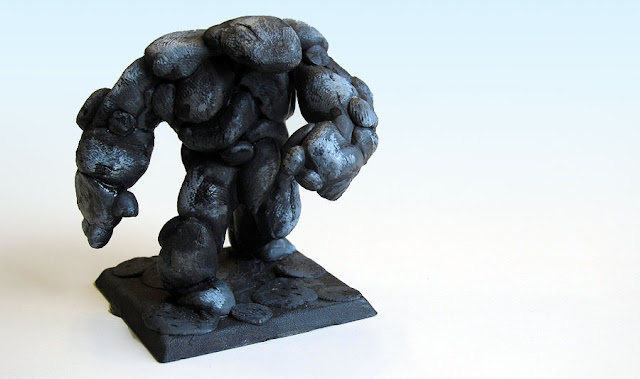 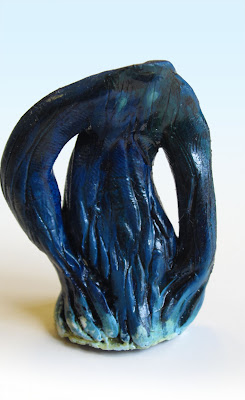 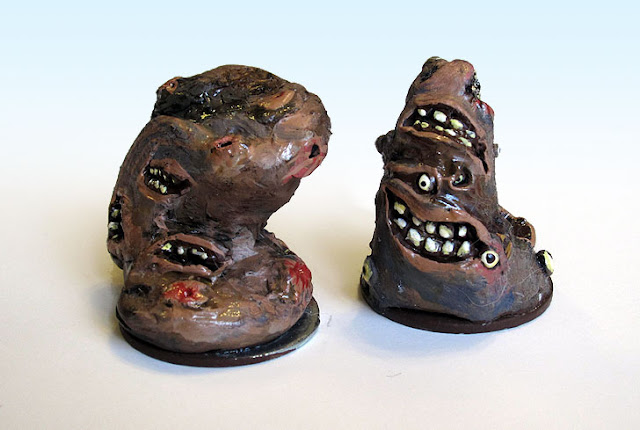 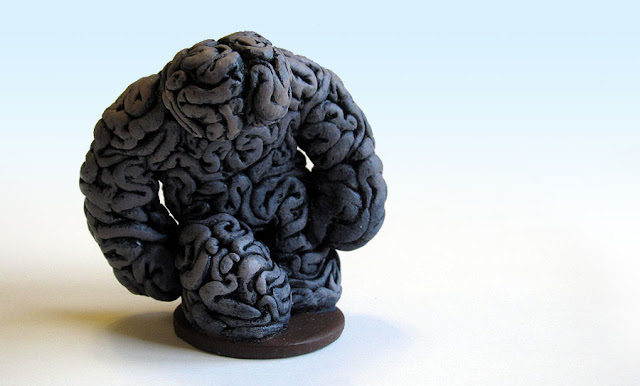 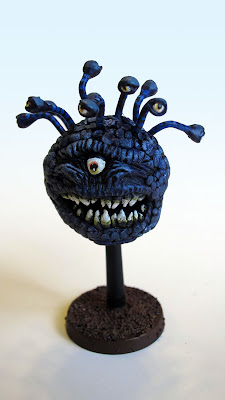