I've just started researching Dark Ages color schemes, but I've found Jenny Dean's website a great resource (thanks to Model Dad for pointing me there). Jenny has a number of posts dedicated to Anglo Saxon dying techniques. Along with descriptions of her dying methods and examples of her experimental results, she also drops cool tidbits like this:

"The analysis of dyes in textiles of the early Anglo-Saxon period seems to indicate that reds, like purples, were mainly used for narrow woven bands, headdresses, embroideries and accessories, such  bags, rather than for larger fabrics. Where dyes were used in larger fabrics (and dyes were detected in only one-third of the larger fabrics analysed) these were mainly dyes that give shades of yellow, blue and brown, plus green from blue and yellow dyes used in combination. It is also possible that, at least in the early Anglo-Saxon period, reds and purples were colours reserved for people of high status."


Ms. Dean seems pretty reliable regarding natural dying techniques of early Britain, so I'm going to assume her description of colors and their frequency in the archeological record is accurate. This gives me a good place to start for planning out color schemes (dyed textile images from Jenny Dean's site).

I had read a bit of wargamer wisdom that said the color green was not available as a dye color during the dark ages, but based on the examples above I feel confident that nearly every color of the rainbow could be produced during the 11th and 12th centuries, and only the saturation and frequency of various shades need to be adjusted on our figures to recreate accurate clothing.

With these Anglo Saxon color samples as my guide, I've tried to find suitable color matches in the Vallejo and Games Workshops line of paints. I'm working from images from the web, and comparing them to the paint samples from the two manufacturers, so I can't promise an exact correlation, but hopefully it's good enough for the tabletop. The Games Workshop colors appear to be more vibrant on the whole, so many of these GW colors would probably need to be desaturated by adding some white or brown to the shade.

Now that I've narrowed down the colors I'll be using for my dark ages figures, I've combined them into a few color palettes.  Although information about warfare during this time is limited, it's unlikely vikings, normans and anglo saxons adhered to any sort of uniform, each man providing his own gear, painted and dyed to his own taste.

On the wargame table though, I find treating each figure as an individual turns the board into a visual mess. My goal was to create a color palette for each army that would visually tie them together, without implying that they were wearing uniforms or livery. I wanted these color palettes to be fairly generic so I could assign them to armies at a later date, so I've gone with four simple color themes based on the seasons of the year.

The common colors will appear most prevalently within each army. One or two uncommon colors may appear as well, with the rare complimentary colors reserved for decorative items and borders on elite figures. 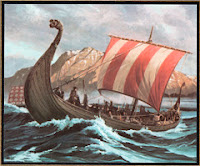 I'm hoping to start playing SAGA this winter starting with viking and norman warbands. I painted up a few 28mm bondi from Wargames Factory's "Vikings" as samples to see if this technique would work.  When I think of vikings one of the first images that comes to mind is the viking longship with its striking red and white striped sail.

I decided to assign my autumn color scheme to any vikings I paint up, with particular emphasis on ivory and a rusty red color. The bondi were viking farmers, and unlike the more heavily armored huscarls, the bondi are wearing simple tunics and breeches providing a good range of fabrics to paint up. As lower class warriors, they shouldn't have a large amount of the rare red fabric, but I made sure to include at least one bit of red on each. A red cap on one, but only a simple belt or pouch on the others with some red being incorporated into the simple geometric designs of their shields. I also included a bit of ivory in various tunic borders as well, using the two "team colors" to tie the whole army together.

I still need to paint up more vikings and some opposing normans in a different color scheme, but already I'm happy with the result. By forcing myself to limit the color palette and pay attention to how I could incorporate the ivory and rust red colors I think the end result should appear suitably archaic but with enough pops of color to add visual interest to the game.


There are also a few paint sets that offer a good place to start if you need to pick up more than a few bottles of paint to add to your collection.

The Vallejo Wood and Leather set contains a variety of earth tones, a great place to start for the common colors that appear in dark age armies.

The Vallejo Earth Tones set  looks like it provides a good initial set of muted natural colors too.

The War Store's Vallejo Game Colors Paint Set: Undead
The undead set comes with a metallic silver and bronze, white and black as well as a shade of red, parchment, purple and violet. Along with a few individual bottles of earth tones, this seems like a good basis for a generic dark ages color palette.
Posted by John at 3:00 AM