I've been working on a set of sci-fi skirmish rules for a few years, and finally brought them to test with the Scrum Club. The rules are still in an "alpha" state and I'll be posting about them more as they approach a publicly available "beta", but I thought I could share this battle report so you could see what I've been up to.


Star Schlock is designed to simulate the low budget, forgotten sci fi films and tv shows produced between 1968 and 1988 on the tabletop. I've got a soft spot for such gems as Starcrash, Battle Beyond the Stars, and Robot Jox, but Star Schlock should work for getting high brow fare like Battlestar Galactica, Planet of the Apes, Dune and Star Trek on the table as well.

For this game, four players would face off divided into two allied teams. Rich and Josh took the sinister forces of the Totalitarian Overlords while Walt and Joe commanded an allied native resistance and a stranded Baroness caught in the crossfire.


Each force had their own objectives, unique to them. The asymmetric goals for each player are intended to capture the battles from sci fi movies which aren't always evenly matched set piece battles.

In this matchup, the white armored soldiers of the Totalitarian Dominion were intent on conquering the rebellious locals, with the detachment of their force under the alien Captain Vrok leading the assault.

The Baroness, stranded on the planet after her starship came under attack by Dominion forces, was intent on escaping the battlefield.


Aiding the Baroness were a collection of primitive alien rabble led by Doctor Owens, an anthropologist who came to study them but instigated their insurgency to resist Dominion rule instead.


The key to their victory would be Doctor Owens' daughter, Space Cadet Owens who knew of a vital weakness in the Dominion's forces that could swing the tide of battle.


As battle was joined, both sides surged towards the objectives essential to securing victory. The  red clad personal guard of the Baroness dashed through the native village to capture the communication objectives so the Baroness could call in an escape vessel to escape the Dominion's clutches. 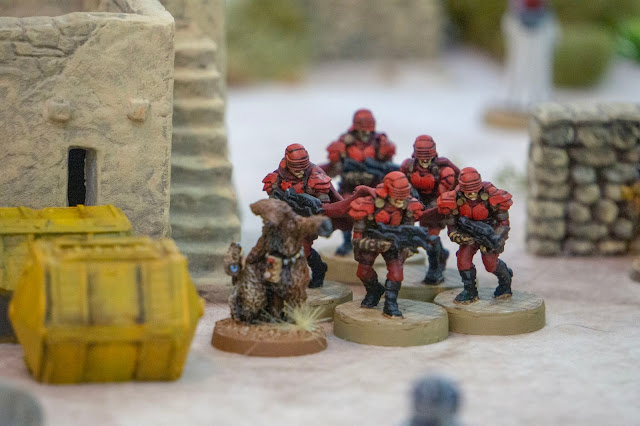 Charging forward the Dominion quickly claimed a number of important battlefield objectives: energy picket towers on the outskirts of town. 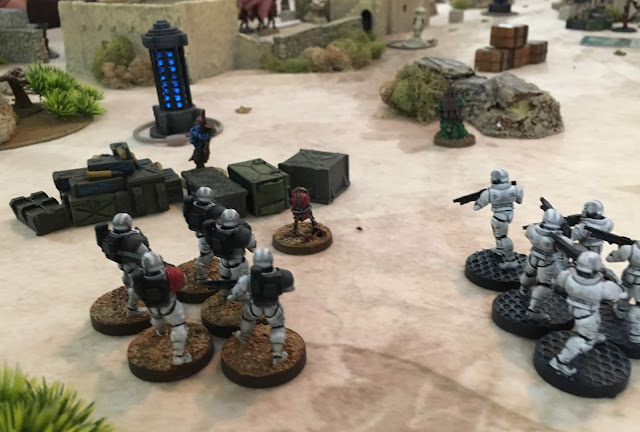 That Baroness darted towards her landing zone, while her valiant defenders attempted to hold the line against the Dominion assault. 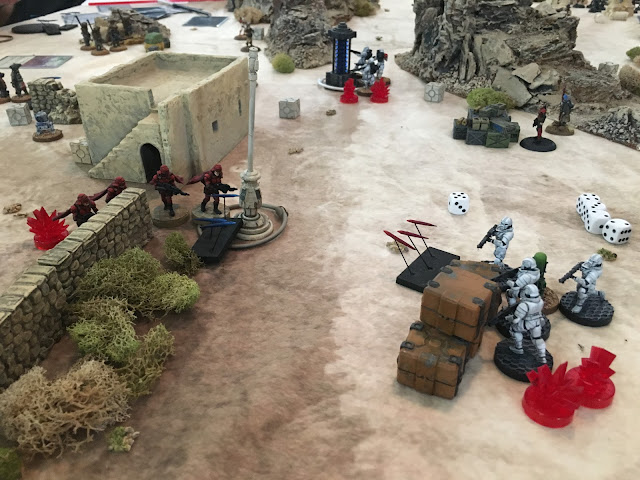 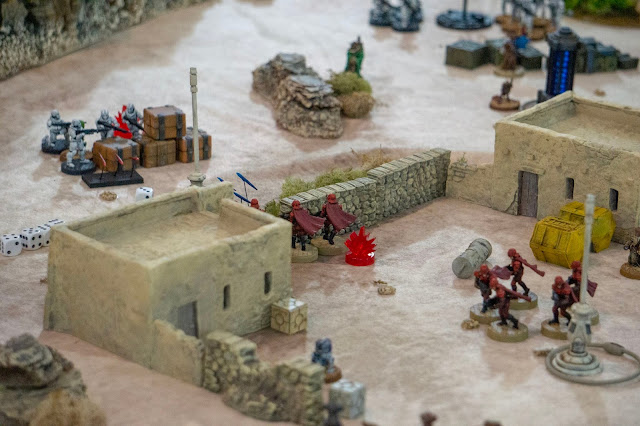 With the Baronesses troops dug in around a central objective choke point, the vile Overlord of the Totalitarian Dominion floated forward on his hover throne to direct an orbital bombardment from his personal cruiser hovering in orbit.


With a hole in the line, a second squad of guard took a building overlooking the Dominion advance, while the Dominion dronetroopers pushed into the newly opened gap. 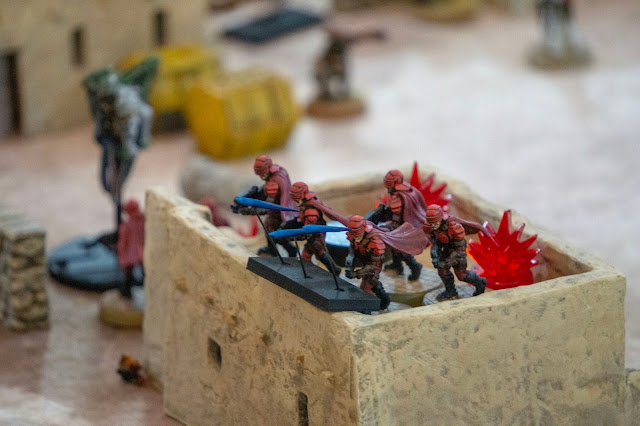 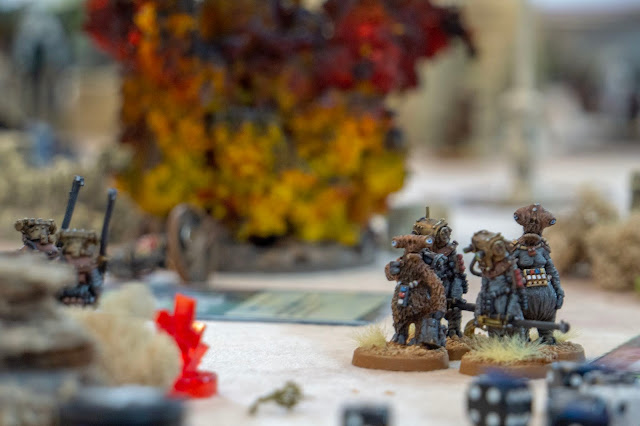 The Overlord slipped into the guards's line, unleashing a one-two blow of noxious fumes that overcame all units within short range, as well as calling in another orbital strike on the native resistance.


With the Dominion closing in on the leaders of the resistance, they make a last ditch effort to secure a victory. Having called in an escape vessel, the Baroness braves a hail of fire to reach the landing zone.

Space Cadet Owens, having used her rocket pack to move around the flank of the Dominion forces strides out from cover. 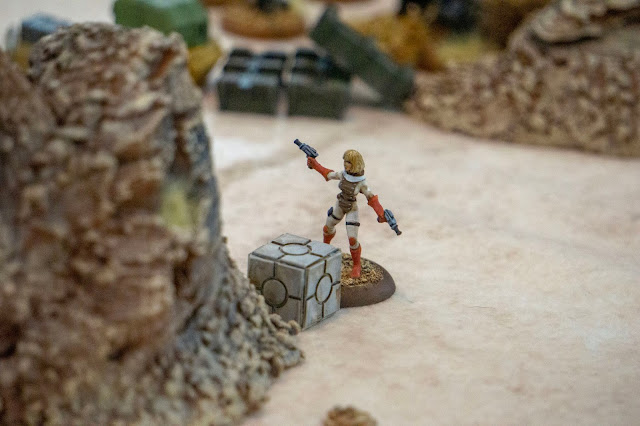 She cries out to Captain Vrok, begging him to abandon the Dominion cause and join her. "You can't deny it Vrok! You love me, and I love you! We can make it together, we just have to try!"

Tragically Walt's dice failed him and he was unable to secure the Forbidden Love objective. Vrok rejected Space Cadet Owens' plea, "It could never work between us! Bumpy forhead, smooth forhead, our differences will always tear us apart!"


With the Dominion forces slaughtering the resistance and capturing a number of objectives, they were able to force the end of the battle. Both sides totaled victory points, the Dominion scoring a total of 23 and the allied resistance scoring 19. Had Walt's dice been a bit hotter and Space Cadet Owens able to convince Vrok to admit his love for her and join the resistance, the Goodies may have been able to squeak out a win.

And that was it! Teaching a new system, especially one that's still under construction, is always bumpy, but overall I was pleased with how the game turned out. I still have more refinement to do on Star Schlock, but I can sense that these rules are starting to gel. I was happy to see players having to make challenging decisions, planning and executing strategies several turns ahead, and delivering at least a handful of memorable highlights. After working on them for nearly three years I was worried I'd start getting sick of them, but I'm honestly jonesing to play again immediately.

There's more work and play testing ahead, but I do want to give a shout out to the Second Saturday Scrum Club, my Monday night game crew, my family and my patient ex roommate Mark and his wife who have already helped me get this far. Thanks play testers! I couldn't have done this without you!