Last year I did a review so I could compare my progress on my painting and gaming output between 2011 and 2012. Blogging, keeping records and setting goals has really helped me keep my lead pile under control, so humor me while I do a little year end bookkeeping.

That's a big jump over my output from last year, but mostly because I stuck to steady progress throughout the year. With quite a few real life difficulties, painting provided a welcome break from this year's challenges.

I visited a number of the HMGS conventions in the past but my trips were quick affairs where I dropped in, took a look at a few games and picked up some figures from the vendors before heading home. They always proved to be nice day trips, but I never felt compelled to attend for multiple days or even play in any of the games. This year I decided to get involved. Wow, what a difference! Conventions are fun! I've roped one of my game buddies and our families into making multiple convention trips per year, and I finally have a third member of our group and his wife booked for our trip to Historicon this year. I think these gaming conventions are going to be a feature of our family's yearly plans for a long time to come.

Here's the one area I'm hoping to improve on in the coming year. I like painting, but gaming is where this hobby changes from a solo pursuit to something that becomes a shared experience. I don't laugh out loud when I paint by myself, but I do so frequently when I'm rolling dice and pushing little lead men around. There's always a sense of satisfaction in finishing off a unit, or discovering a new period, but the real joy in this hobby comes from actually spending time with friends and family while you play. With our busy lives I'm really hoping to get in at least one game per month in 2013.

I've got five main periods I'm working on at the moment. I was sorely tempted to pull the trigger on even more projects during the holiday sales this year, but I made my Willpower saving throw and resisted expanding into X-Wing, Bolt Action or Dux Britanniarum.

Ancients: I've been slowly adding to my Carthaginian army for quite a while, using the Gauls as the core to play against my Caesarian Romans.  I've been reluctant to pick up their Republican opponents because I want to commit to a single manufacturer and I'm waiting to see what Victrix has lined up for their plastic Republican Romans.

Beating them to the punch has been Warlord, who have their own Late Republic Romans ready for release in the next few months. With a few units of Wargame Factory's Romans under my belt I might stick to that later period to be able to game Caesar's battles against the Gauls and the civil wars against Pompey. I've got a dream of doing a hypothetical battle of Octavian vs. Mark Antony and Cleopatra on land rather than their historical sea borne confrontation.

In any case, I've got about one and half division per side for Hail Caesar. I'd like to double this to three divisions per side to get a little closer to playing the rules as they are written.

Dark Ages: I've just started dabbling in the dark ages with SAGA. With two points of vikings painted up and four points of Normans atop the lead pile, it shouldn't be too difficult to get the two sides to 4 points each and on the table this year.

World War II in 15mm: Spurred by our games of Fireball Forward at the HGMS shows, my pal Mike and I are working on some WWII forces in 15mm. We both have the cores of our eastern front armies painted up, so progress on this will largely be focused on getting some armor and terrain ready.

Sci-Fi: I have a set of rules I've been working at periodically for years. They are a pet project, but I'd love to get my notes pulled together into a final format simply so I can stop being bothered by their  unfinished state.

Fantasy: There is a big box of Reaper Bones headed my way this March. I'd love to get them all painted up within a year of receiving them, but with my wife and I trying to sell our house this spring, that might not feasible. We also have a large scale fantasy wargame we've been thinking of playing that I was hoping we could get up and running by this summer.


A Message to Games I Won't Be Playing

No Bolt Action, I will not be tempted by your wide range of plastics. No Perry Brothers, I'm not going to buy your ACW plastics nor your highly detailed War of the Roses line. No Fireforge, I've heard the rumors that you'd be releasing muslim opponents for your Crusaders, and while I have every intention of starting a pair of 1st Crusades armies, it won't be this year. Absolutely not, Post Apocalyptic warbands. I see you beckoning me from the Chicago Skirmish games, and I know you've got Mad Max 4 currently in production, but no. It's not going to happen. My willpower is strong. Please stop batting your eyelashes at me.  Please.


After the trouncing my gauls received in my last Hail Caesar game, I decided it was time to reinforce them with some of the allies I had atop the lead pile. I'm aiming for a full Carthaginian army to oppose a Republican enemy, but with my interests ping ponging between periods, this Punic Wars project is going to take a few years to complete. Take a look at the color scheme I worked out for my ancient Spanish after the jump.

Merry Christmas! It's been a bust few weeks, but I've managed to sneak in a few painting sessions. I've got a batch of ancient Iberians ready for matte varnish, but the weather is snowy and sleeting today, and not very conducive to outside spraying.

I hope you enjoyed your holiday. We spent time with friends and family and had a pleasant day at home on the 25th recuperating from the buildup to Christmas. My wife left a number of wargame presents under the tree which I'm looking forward to completing during our winter vacation. Her Numidians, Architects of War terrain and Flames of War figures will be making appearances on my blog soon. Did Santa drop any little lead men down your chimney this year?

I found some time to make headway on a viking warband for SAGA. I was especially keen to see if the color palette I selected for my vikings would provide a suitably gritty and varied appearance while still maintaining a subtle tie between the various figures.  I've used predominantly warm browns, with a large amount of ivory and red as the thematic tie between all of my vikings.


I picked up a pack of Gripping Beast bondi to add to the Wargames Factory vikings I had on hand. I wanted to use Little Big Man's shield decals, so did a little swapping to keep the bondi all wielding similar shields and reserving the intricate designs of the LBM decals for the more well off viking hersir.


These vikings were some of Wargame Factory's first plastics. WGF early sculpts seem a little off to me, but the flaws in their Romans disappeared once they were ranked up. Based singly for SAGA though, the Wargames Factory sculpting oddities are more apparent. Many of their arms seem unusually short and stumpy, and their hitchhiker thumbs sticking out allow various weapons to be chosen for the warrior, but look pretty wonky to me.


To fill out the unit of bondi I added a pack of Gripping Beast metals. They mix well enough with the WGF plastics to my eye, have great detail and life, and were free from egregious mould lines or flash. I'm hoping to get some GB plastics to compare, but with the few models needed for SAGA I'm leaning towards forking out the cash for nice metals rather than the more economical WGF plastics.


More vikings may have to wait until the new year though. I've switched scales and periods yet again, this time to gingerbread in 80mm, but this should be a short side project that won't divert me from the dark ages for too long. 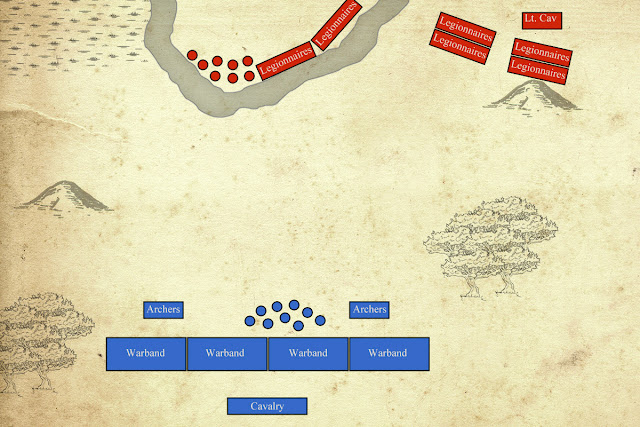 What was it like fighting behind a shield wall?


At the moment I've got 15mm Eastern Front for Fireball Forward in the wings, the Reaper mega delivery of fantasy figures coming this spring, and Warlord threatening to release plastic Caesarian Romans soon, so the only natural course of action when faced with so many projects is to start a new period. Of course.

I've heard the siren song of SAGA and been working on some dark ages terrain and a few test figures to try color schemes recently. I love the historical aspect of our hobby, so I've also been picking up Ospreys

and pouring over articles and I've recently run into a few really interesting bits. "Behind the shield-wall: The experience of combat in late Anglo-Saxon England" is a masters thesis by Jordan Poss, written while attending Clemson University. What caught my attention was the paper's focus on the experience of the men in combat. What was it really like to march up the hill at Hastings, shoulder to shoulder with other soldiers, clutching a spear and shield before charging into battle?

Poss is an entertaining writer. He gives a general background of the political situations that lead to the set piece battles during the dark ages, explains the tactical challenges faced by the opposing armies at Maldon, Fulford Gate, Stamford Bridge, and Hastings and then tries to get into the head of the men fighting toe to toe. Looking beyond the arms and armor to explore the role of fatigue, terrain and morale in these case study battles. His description of the experience fighting amongst the slain and wounded warriors and their disemboweled horses really stuck in my mind.  I've read a bit about the various battles of the Conquest but it was nice to revisit them for another view of these ancient struggles. 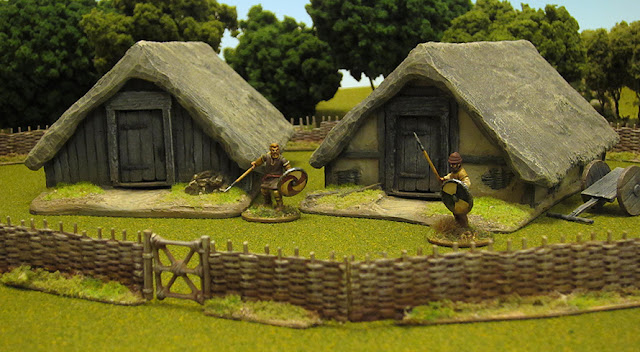 Architects of War was running a show special at Fall-In for a bundle of dark ages terrain I couldn't pass up. I painted up the Daub and Wood A-Frame and Timber A-Frame to go along with my wattle fences in anticipation of some SAGA. My thoughts and progress pics after the jump.