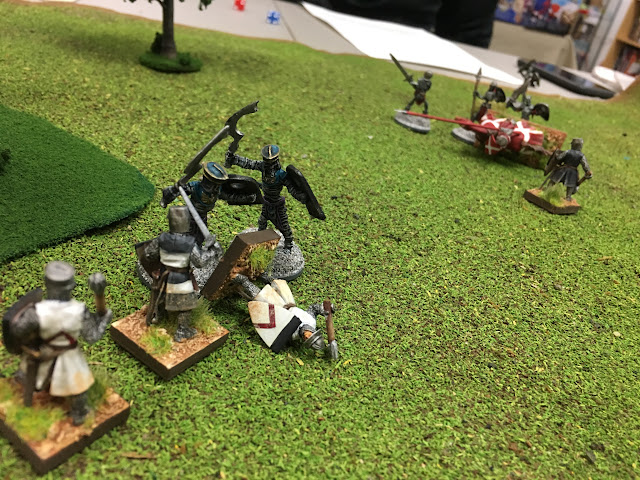 Outside local gaming conventions, finding fellow wargamers has been pretty tricky since I entered the hobby 10 years ago. I managed to convert some of my friends, roped my family into gaming, and contacted a few other local gamers, but locating opponents is definitely the most challenging part of the hobby for me (well, except for painting pupils on the eyes of 20mm figures). I lucked out when Joe, a visitor of my blog and local resident, contacted me to set up a game. After a flurry of emails we convened at a local comic shop to roll some dice and push some figures. I don't mind painting up both sides of a game, building all the terrain, reading the rules and teaching them.... but I tell ya, it was such a relief to be able to just bring my own figures and some terrain to match my opponent's collection, sit down and play.

Some pics and thoughts on the Advanced Song of Blades and Heroes game we played after the jump.

Each year I try to compile all of the various wargame related sales and deals for gamers to help the community find the best holiday specials. The fact that my wife invariably picks up a few items from this list to put under the Christmas tree is in no way related. Mere coincidence, I assure you. As always, if you come across any deals let me know and I'll amend the list. 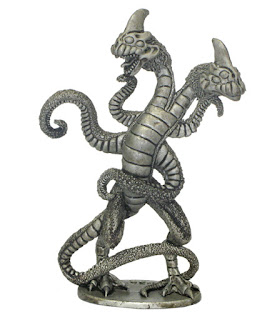 The Demogorgon: This is it! THE actual Demogorgon miniature featured in the Netflix series "Stranger Things".  The mold is decades old and currently owned by the Italian manufacturer Mirilton. It's 10 Euros, and their minimum order is 15 (so pick up two I guess?) and with shipping to the US you're looking at $37 bucks for a pair, but still. Demogorgon!

The Grizzly Allied Walker: Konflikt 47 is Warlord Games expansion of Bolt Action. It thrusts the game into a pseudo-historical extension of WWII to the late 40's, finding Axis and Allies waging war with super science mecha, zombies and tesla energy cannons. I'm not sold on the milieu but I fell in love with the Grizzly Walker after seeing an early production model at Historicon. It's a solid, detailed mecha that could be employed in a variety of alt-history, steampunk or sci-fi games.

Frostgrave: Expeditions to the ice locked necropolis show no signs of letting up, and no doubt the wargamer you are shopping for would be eager to launch their own venture to it. I've been reluctant to jump into another game with so many on my plate already, but even I've been eyeing the Cultists, Gnolls and Undead for use in some of the fantasy games I already play. Nick at Northstar just released a pack of sci-fi upgrades to mix and match these into a host of customized space weirdos too. Perfect! Figures also available from Warlord and even Amazon.

Star Wars Rebellion: Everything I've read about Star Wars Rebellion makes it sound like a tense, asymmetric board game that captures the struggle of the Rebels to overthrow the Empire before the might of their Death Star extinguishes the rebellion forever. A bit too long to play at our weekly game nights, but perfect for those lazy holiday and snow days when weather keeps the family cooped up indoors.


Author Marc Morris: I recently finished A Great and Terrible King about Edward I by Marc Morris and enthusiastically recommend it. I'm looking forward to picking up his earlier work about King John and I'm sure his book on the Norman Conquest is equally as thorough and engaging.

Tabletop Wargames: I've had this book on my watchlist for ages, and it's finally gone into print. Rick Priestly, gaming luminary, has penned a volume covering his theory behind game design. I love getting into the nitty gritty behind game mechanics and would love to peek into the mindset of Rick's obsession with d6s.

Rogue Stars: Cutting it close to the wire, Rogue Stars (Osprey's latest blue book wargame rules) releases December 20. I enjoy Lion Rampant and Dragon Rampant and I'm looking for a new set of rules to cover sci-fi skirmishes. This looks like the ticket!

Brexit: Sorry Brits, I know this likely stings, but the pound has dropped in value to near parity with the US dollar. For those of us in the colonies, this is a golden opportunity to take advantage of the increased buying power of the dollar in the UK. And with our own economic situation becoming a bit unpredictable in January, this shopping season offers a window to finally place some big orders with North Star, Foundry and other vendors across the sea.

Foundry: Currently running their Christmas special (buy 8 packs, get 2 free or buy 16 packs get 6 free). Coupled with the increased buying power of the dollar, this is a once in a lifetime opportunity for American customers to get their hands on some beautiful Foundry lead. I'm partial to the unreleased Rogue Trader "Liquidation Squad", Ancient Farmers and Townsfolk, Pirates (for the upcoming Blood and Plunder), and Old West (Westworld on HBO has fanned the flames of interest in doing some Western gaming in my game group).

Mantic: Typically offers some great holiday deals (including their Crazy Boxes packed full of a variety of their figures). This year they're also running an event on Black Friday with hourly deals. Who knows what lies in store!

Fantasy Flight: Each year they run a sale on their board, card and miniature games and 2016 is no different. Check this out, our family's favorite Lord of the Rings board game on sale for 20 bucks, Talisman for $20, lots of Game of Thrones and Hobbit games for cheap. And that's just FFG's own games. Plenty more from other publishers available as well. Or try their new Star Wars Destiny card + dice game, my favorite Star Wars Armada (extra dice and new Rebel squadrons make great stocking stuffers), or the ever popular X-Wing.

Warlord Games: 25% off plastic tanks, 20% of resin tanks (looks like they are clearing out stock, supplies are limited), Terminator sets on deep discount, 10% off Pegasus Bridge, La Haye Sainte, Rorke's Drift, Liberty or Death! Armored Fury boxed set at $48 off!

Minairons: Use code TMPR2016 when you order €50 or more to receive 30% off your order through Black Friday Nov 25.  The sales only extends to items on stock, so grab those Renault tanks and biplanes while they're still available!

Northumbrian Tin Soldier: Not specifically a Black Friday sale, but 50% OFF Otherworld Miniatures! Wow! Awesome figs at prices that are at a steal! Supplies limited, so don't buy them all because I want some!

Splintered Light: 20% off from Nov 24 until the end of the year with code XMAS16.

Victoria Miniatures: Every order, regardless of size, between Nov 23 and Dec 3 receives a free miniature! The free miniature changes each day, check the list here.

Miniature Building Authority: Bucking the trend, MBA has been running a sale that ENDS BEFORE Black Friday. 15mm items are 15% off, some 28mm are between 10 and 25% off.

Osprey: Their Black Friday Sale offers 30% all Osprey books ordered directly from them

Brigade Games: Now through Dec 16, receive 15% off all orders.

Miniature Market: Tons of stuff on sale through Monday Nov 28, including Guild Ball, Warmachine, Infinity plus tons of board, card and role playing games

Critical Mass: 20% off everything in the store until Friday, Dec 2. and free shipping on orders over £50.00 GBP.

Hardwood Games: 20% off everything with code BF20 .

Hydra Miniatures: 20% off everything in the store!

ACW Gamer E-Magazine: 20% off miniatures, subscriptions and back issues.