Hail Caesar is right up my alley

"HC doesn't lend itself to the kind of precision that is dependant upon scientifically
accurate measurement, or complete sobriety for that matter;" - Rick Priestly

Cranking Out Some Ancients 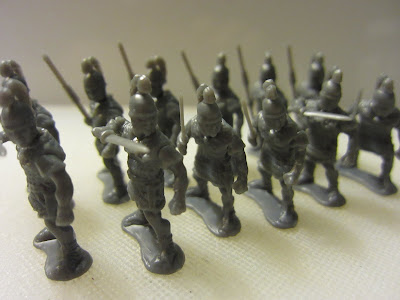 I assembled a dozen Wargames Factory Romans last night, a nice cap to the three day weekend. I picked up a pair of these "Caesar's Legions" boxes during the WGF one-day sale a few years ago, and they've been sitting in storage ever since.  When I decided to switch to 28mm from 20mm for my ancients, using these Romans as a core to build from made my decision a lot easier.

After reading a number of bad reviews I was expecting the worst of these figures, but they didn't turn out too bad. Detail is soft, and the one squatty pose does look a little odd, but overall they went together quickly and I think I can get them painted up rapidly. I really like the pose in which the legionnaire has his gladius poised for a thrust over his shield.

Taking stock of my current projects, I have a number underway. I like to keep several going at once so as one is wrapping up I can easily jump into another, while prepping a third.
Looking forward to getting some of these finished and based so I can start testing out DBA, Impetus and Hail Caesar.
Posted by John at 1:20 PM No comments:

Painted up some Foundry Ancient Germans that have been in my lead pile for 10 years.  I have a motley collection of shields to go with them, some Germanic, some Celtic or Roman, and even a few hoplite shields I won't be able to use.  There were two shields in the collection I couldn't identify - hexagonal shields with half circle clips taken out of the top and bottom.  I don't recognize them. Are they Germanic? Celtic? Hoping to get an ID on these... 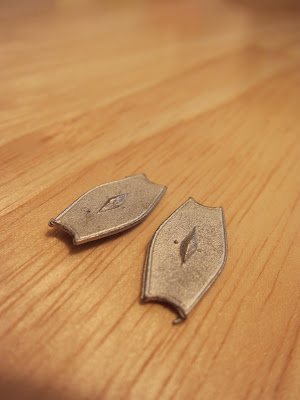 Edit: Thanks to a response by Alan Curtis and Swampster on TMP. Turns out these are based on a few, probably ceremonial shields in Briton.  I decided to clip the "points" off the top and bottom to create regular hexagonal shields. 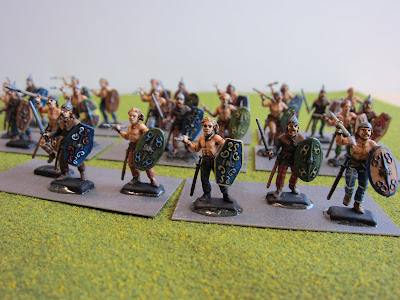 Back in the Saddle Again

Hello internet! After a long hiatus from the world of miniatures and wargaming I've decided to hop back in. I've played a wide range of games for decades but I only got interested in historical miniatures around 2005. With funds being tight at the time I started off with a few Airfix WWII armies before dabbling in some 20mm ancients.  I was still working on a pair of antagonists for some ancients battles when the birth of my son put wargaming on hold.

A few years have passed, things have been sorted out on the homefront and I find myself able to devote some time and energy to wargaming again. Wow! A lot has changed since I took a break. Plastics seem to be appearing left and right and ancients are going through a minor resurgence with the release of Impetus, Hail Caesar and Clash of Empires. Drooling over the Perry brothers' collections in Hail Caesar convinced me to switch scales from 20mm to 28mm and upgrade my terrain collection as well. Since I'd be kicking off a number of projects, I thought it might be a good idea to get a blog started to keep track of my progress. Hopefully there's something on here that will be useful to you in your own wargaming endeavors.