My game group is eager to get started on some Caribbean pirate action with Blood and Plunder, but we're sorely lacking in appropriate terrain. We assembled some Spanish style resin buildings, but the pine trees, oaks and other temperate vegetation I have just won't cut it for swashbuckling adventures across the Spanish Main.

Check out my method for creating dense jungle terrain after the jump.

There's a pretty common solution to creating jungle terrain for miniature games; "Aquarium plants, glue to base, job's done!", but I've never been thrilled with the outcome. The leaves always look too large, the plants too shiny and plastic, and while they'll do in a pinch I was hoping to create something that was a bit more realistic.

I also wanted to capture the look of the jungle for the types of games I anticipate running: generally coastal raids or beach assaults in the Caribbean, South East Asia, the Pacific or Scariff. The jungle near shores seems denser to me than the deep rainforest where the forest canopy blocks out light to the floor, restricting undergrowth. Coastal forests seem thicker, and heaped with fronds, undergrowth, vines and creepers.


Rather than create jungle stands with open spaces models would move through, I've opted for dense terrain models will move around. The space between these stands will serve as game trails or areas of less dense vegetation.

I'm also looking to create some height with these pieces as well. These dense blocks of terrain should tower over the models and appear to be an impenetrable tangle of bushes, plants, roots and palm trees.

I started by gathering a variety of plastic plants from the craft store. Most of these came as thick mats of individual "bushes" attached to a flexible grid of rubbery plastic. I also stopped by the pet store and grabbed some aquarium plants that were on sale, but most of the aquarium decor featured plants with leaves I felt would look out of scale next to our 28mm models. 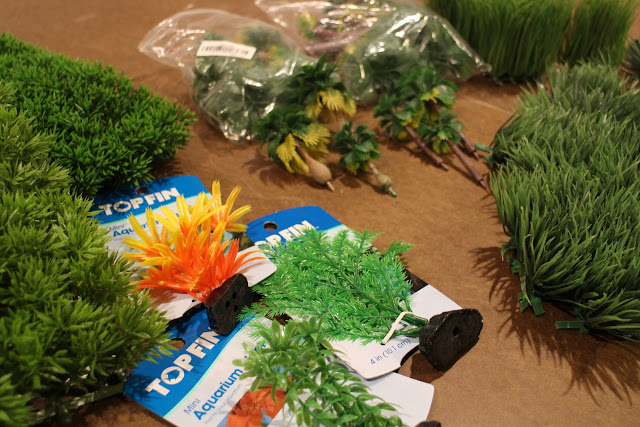 I also ordered two varieties of palm trees and had some pink insulation foam on hand from other projects.

First step was to bring the plant colors towards something more realistic. The aquarium decorations were the worst offenders, but even the craft store mats and hobby palms were a bit shiny and overly bright.

For the vegetation mats, I flipped them upside down and sprayed them with dark green on the bottom and sides. Once dry, I flipped them back over and sprayed light green across the tops of the shoots and leaves. Because the mats are affixed to a flexible rubbery grid, I could bend it to expose every bit of each "bush" to my rattle can. 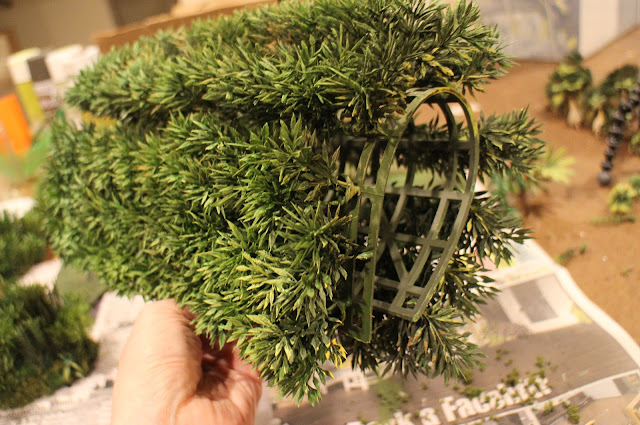 Once the spray pains were dry, I dry brushed the leaf tips with a variety of yellows, browns and greens to give some variety to the vegetation.

The fronds lower on the tree tend to be older or dead, so I gave them a drybrush of brown and yellow. The trunks also got some light brown dry brushing to accentuate the grain of the wood.


The aquarium plants got a similar treatment. Below you can check out a comparison photo to see how the colors subtly shifted after painting.


Creating Bases
Finally, to give my plants something to cling to, I cut my pink foam into chunks. Each was shaped like a small hill to add additional height to each jungle stand. I gave them a coat of black gesso as primer. 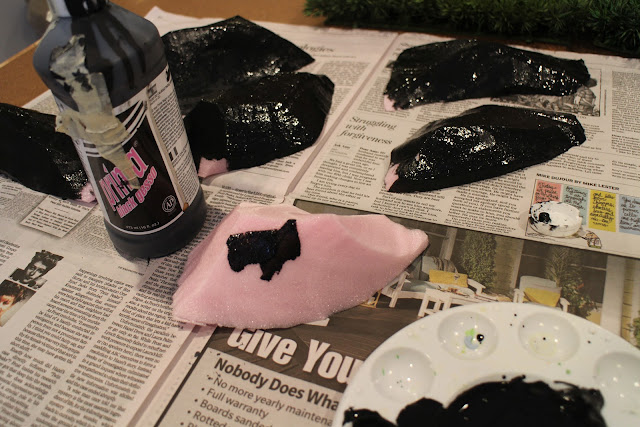 and then a coat of browns and greens as a base layer in case there were gaps in the vegetation I intended to glue on top. 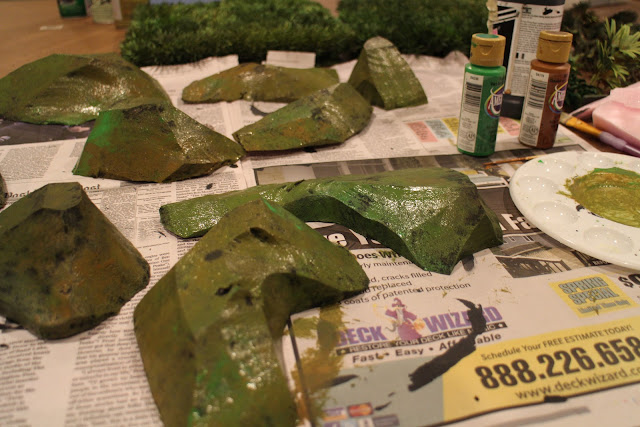 With my preparation complete it was time to begin assembling the stands. I selected a few palm trees for each piece, hot glueing them to the tallest point of each foam base. 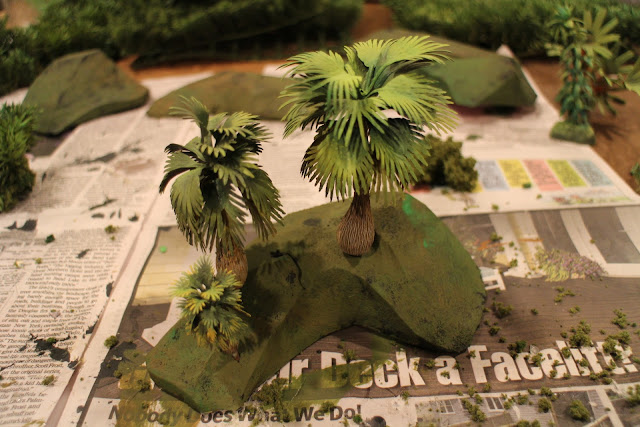 I pulled off some of the individual bushes from each rubber frame and cut pieces of the aquarium plants apart for undergrowth. 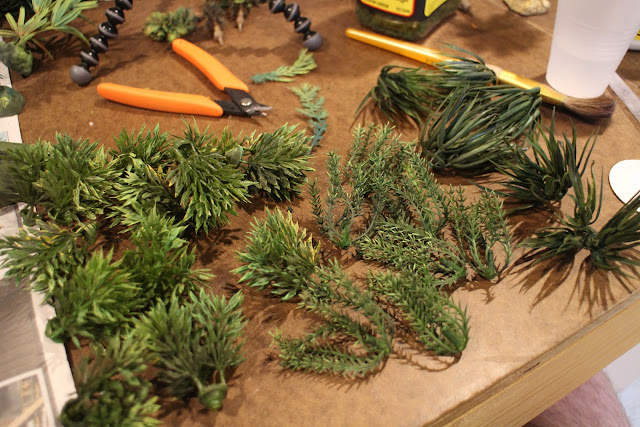 Starting towards the top of the stand near the base of each tree, I began hot gluing individual bushes to the foam base, working my way towards the bottom so they overlapped and covered gaps between each bush.

Add Clump Foliage
After covering the entire base with jungle bushes there was a gap in plastic foliage along the base line of the stand where it would sit on the table. To conceal it, and to fill a few gaps between plastic bushes, I hot glued clumps of Woodland Scenics foam foliage into the gaps. 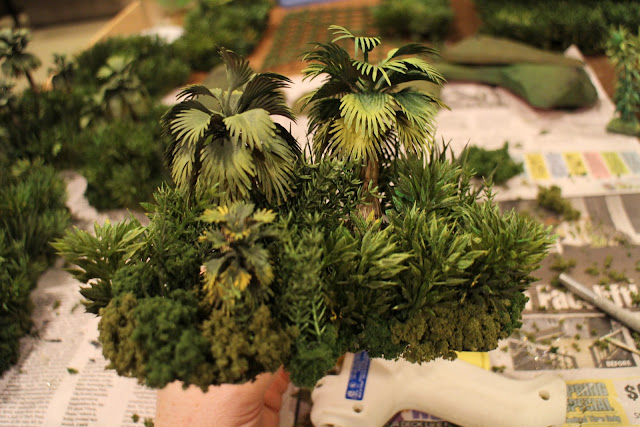 Once the hot glue was dry I "hardened" the foam foliage with a diluted mix of Mod Podge (1 part water to 2 parts Mod Podge) and used an eye dropper to saturate the foam. 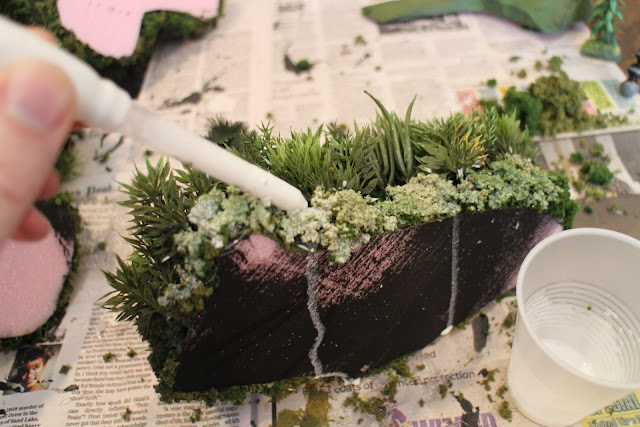 Each stand took about an hour to create. I put my son to work creating some scatter terrain with the leftovers and I'm hoping to create additional low "hedge" style stands but I'm a bit jungled out at the moment. 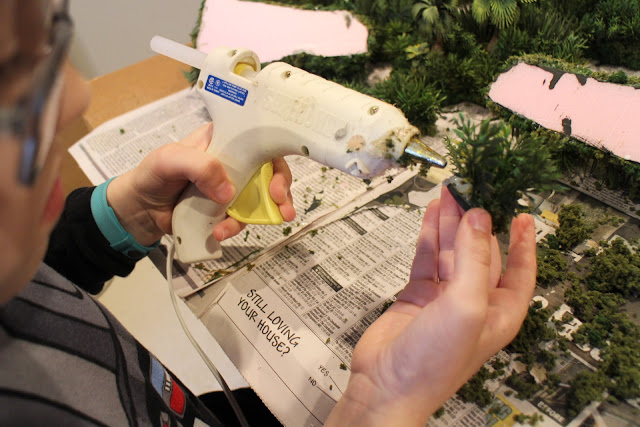 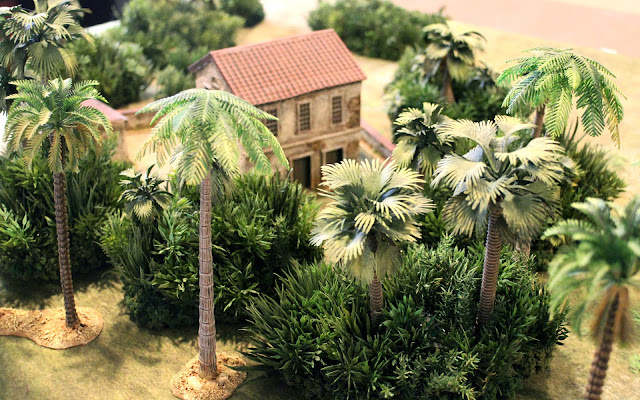 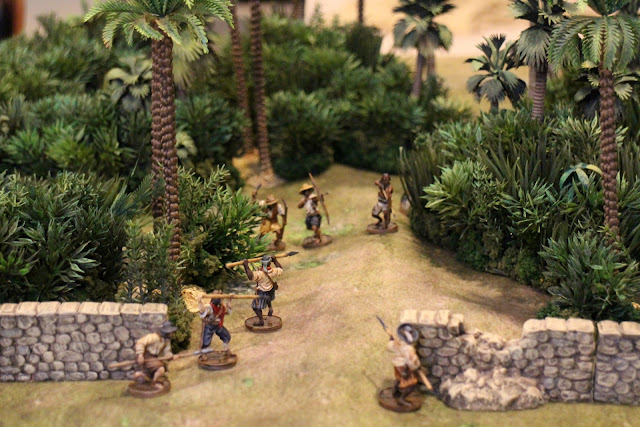 Along with single based palm trees and some other terrain I've already completed, I'm pretty happy with the final jungle stands. They are dense, fill a good portion of the table and look pretty good and I'm hoping they work as well in play!