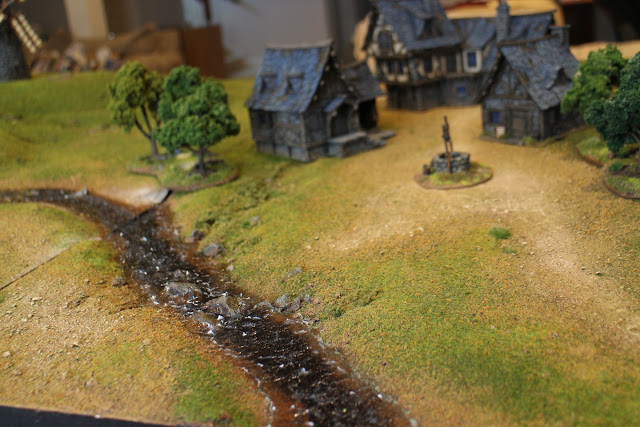 I had some success with my foray into terrain boards last year, but I stopped short from finishing them, unsure how to proceed with the water effects the stream required for completion. I got some use out the boards, treating the muddy ditch as an inconsequential obstacle. A year and half on though, I knew I'd have to fill that ditch with an approximation of water so I could check this project off as complete.

Join me after the break to find out how you too can ruin your terrain boards!


If you missed my previous progress, you can check out my build logs here:

I did plenty of research and found a number of YouTube tutorials that were helpful and inspiring. Armed with a little knowledge and confident I could experience similar results I collected my suite of liquid effects: EnviroTex Lite two part resin, Mod Podge Gloss and Woodland Scenics Realistic Water.

I was planning on using the Woodland Scenics water effects, but doing a little research discovered it stays semi fluid even after curing (which helps prevent cracks). I store my terrain board vertically, and I was worried I'd find my water effect pooling at one end of the board if I used it. I settled on using a combination of EnviroTex with a Mod Podge top coat (to allow me to simulate ripples.) 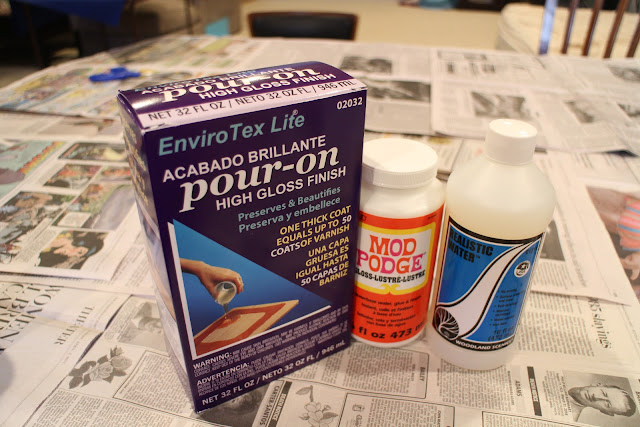 I dammed off the depressions where they exited the board with some hot glue and clear acetate. 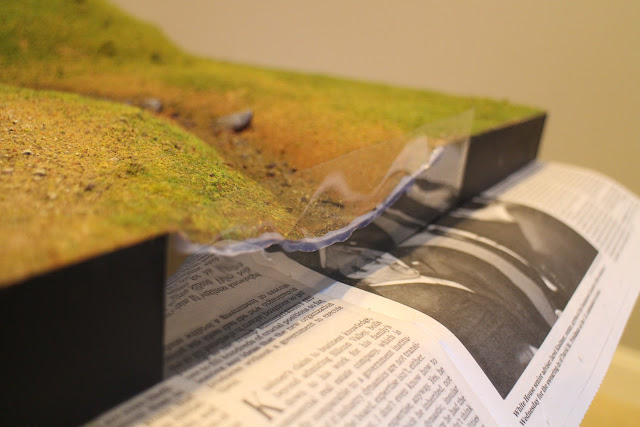 To simulate depth I decided to pour the resin in several depths, adding a few drops of ink to each to enhance the illusion of depth.

I mixed up some EnviroTex, added a few drops of black ink and poured it into the waiting muddy ditch. 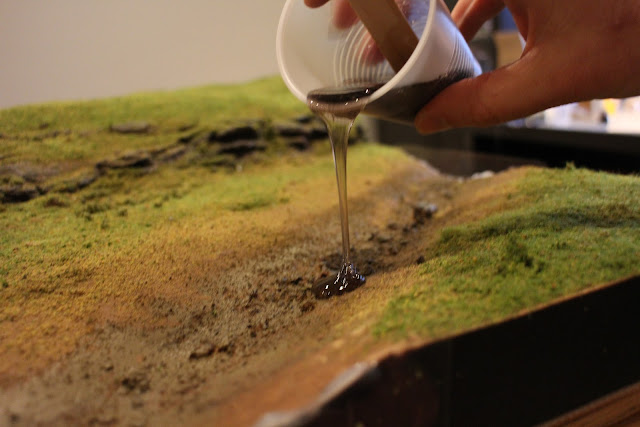 I could immediately tell something was wrong. The ink looked reasonably transparent in the cup, but settled en masse on the board it was far darker than I was hoping for. 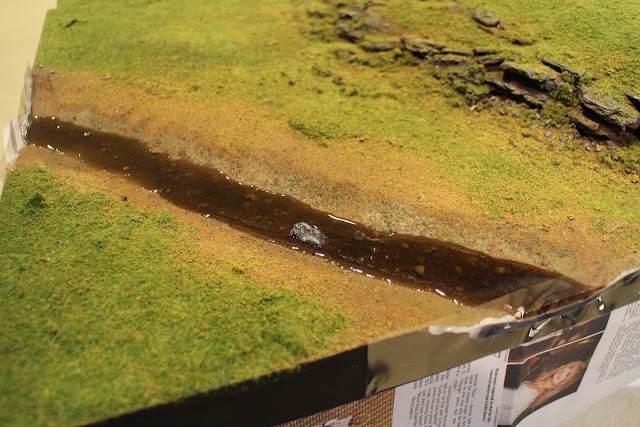 For the remaining two boards, I used less black ink, but it was overall darker than I was aiming for. Once the EnviroTex cured, I poured tow additional layers using far less brown and yellow ink. 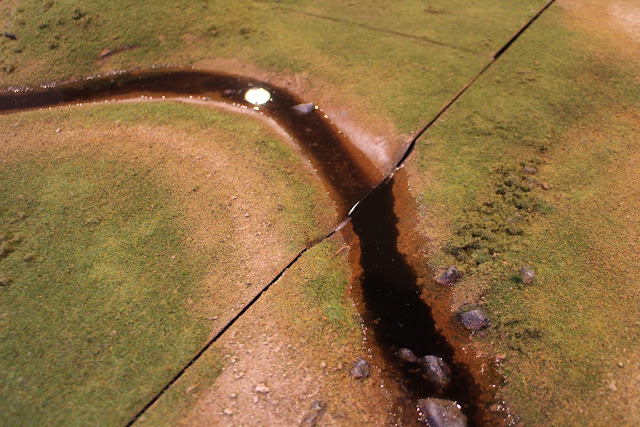 Since I was a but gun shy with the additional layers, I didn't create a smooth transition between the layers. The inky dark deep layer stood in stark contrast with the much lighter, nearly transparent top layers.

Hoping for the best, I pressed on to working on the surface of the stream. Naturally the resin settles into a smooth surface as it cures. To simulate ripples, I decided to use a technique I picked up from a YouTube tutorial: stippling gloss Mod Podge onto the surface. 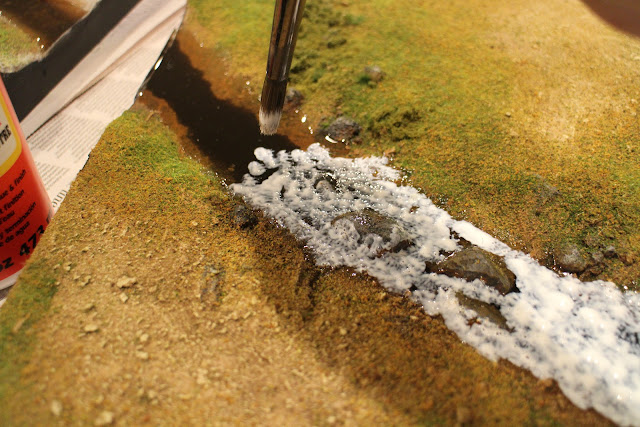 Everything looked good after covering the stream. I checked on it a few times as it set, and then went to bed to give it time to dry. I eagerly checked it the next morning, and was completely gutted. 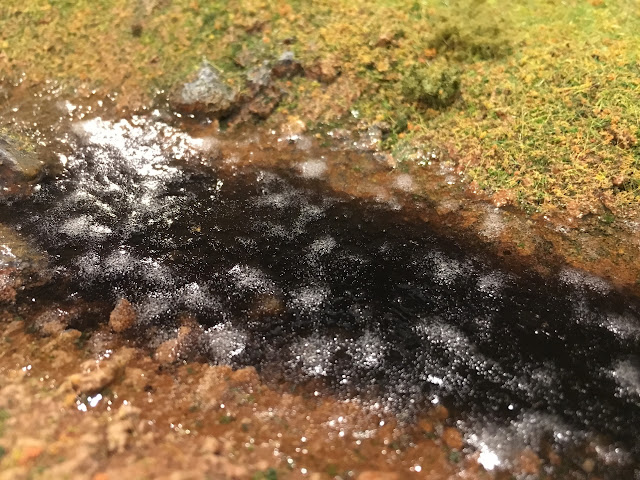 The Mod Podge had dried with some ripples, but was also infused with thousands of minuscule bubbles. It looked awful. I debated several solutions, before settling on trying to dremel the surface off and start again. Luckily, as soon as my dremel touched the Mod Podge I realized that much like a skin of white PVA glue, it could easily be pulled off. 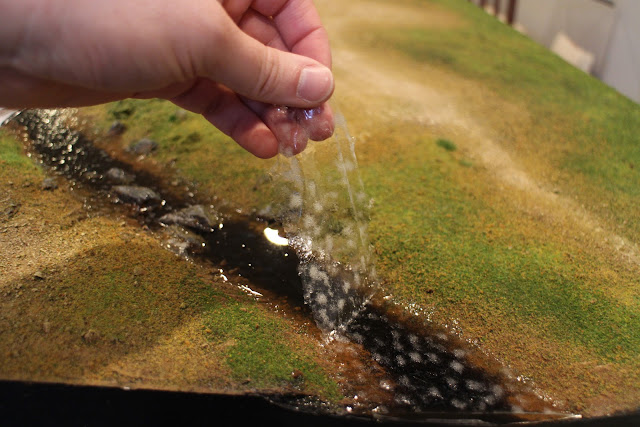 Whew! One disaster averted. After more research I attempted using artist's gloss gel medium. It turned out far better than the Mod Podge, but ultimately didn't result in a finished piece that matched what I had in mind. 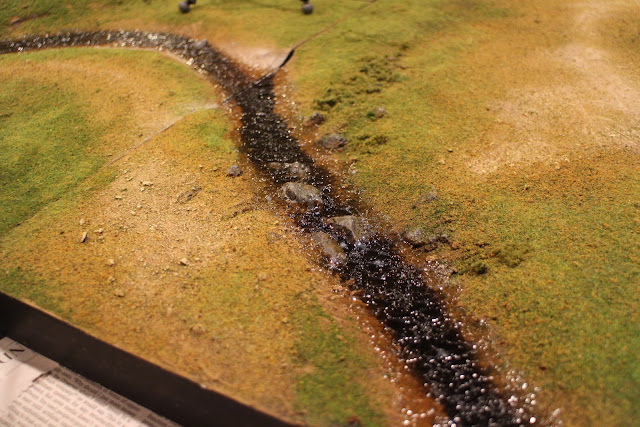 I did entertain the idea of just painting over the surface of the stream in some sort of blue gray paint, but that didn't really seem to be much of an improvement. 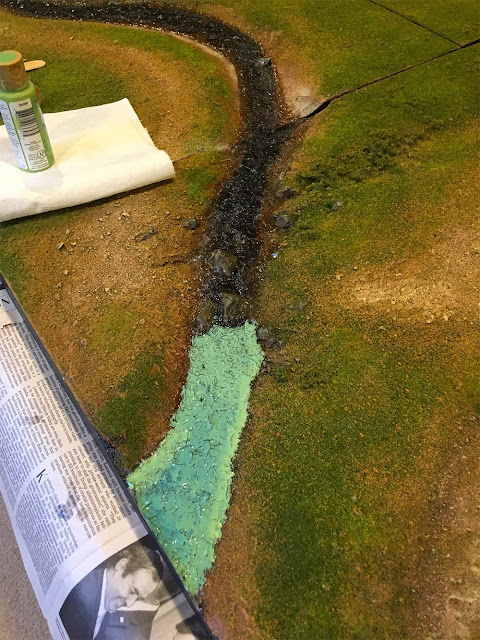 So that's it. Technically this terrain board is complete, but I'm not satisfied with it. I supposed I could carve the resin out and start over, but with such little experience in water effects I'm not even certain how to improve over these lackluster efforts. 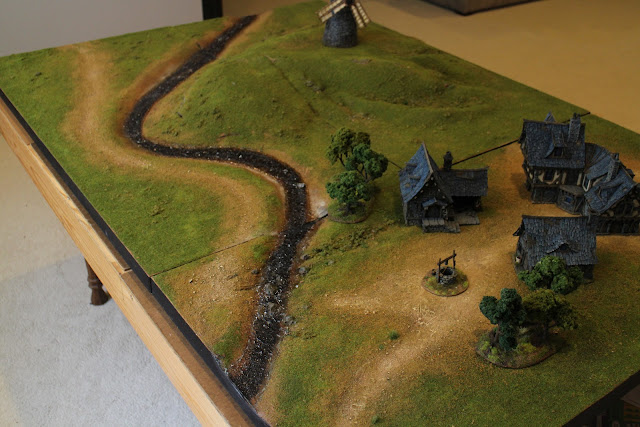 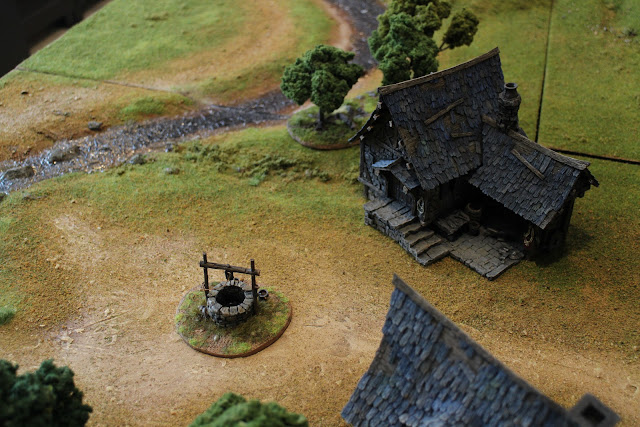