We're nearly done with 2016 (and good riddance!) but before turning to plans for the new year, I wanted to evaluate what I've accomplished this year. My painting took a slump during the summer, but I still managed to finish up:


That's about average for me, although I'm fairly pleased I managed to make some progress on various terrain pieces that had been lingering for far too long.

My gaming over the last year was a bit spotty. I've been playing the FFG Star Wars games at a regular weekly session, but I finally gave up on getting my old game group together. While disappointing, 2017 looks extremely promising for gaming.

My weekly FFG group is going to start up the new Corellian Conflict Campaign. The regular Armada players are very excited and we're considering starting up a MeetUp group to make sure we have a consistent full 6 player game. We're furiously painting up the last of our squadrons in preparation. Can't wait!

To get my fantasy figures out of their boxes I've been playing some Song of Blades and Heroes with another local gamer. We've also talked about giving Congo and Deus Vult a try, and I'm looking forward to teaching him some Lion/Dragon Rampant or Hail Caesar.

2017 is the 30th anniversary of Rogue Trader, the first (and only interesting) edition of Warhammer 40K. I've been on a Rogue Trader bender and I'm using the Analogue Painting Challenge to make progress on a number of figures I've picked up over the last few years.

My eight year old also had a blast playing RT and has been asking to try it again. I may be going on a tear to get some figures and terrain finished so we can have some proper battles. The rules may be a bit pants, but a wooly, sci-fi grab bag rules set really appeals to me, which the later editions lost in favor of a grim, standardized, cookie cutter universe that lost a lot of the charm I loved about the first edition.

We also have pirates and galleons on the way from the Blood and Plunder kickstarter, which I'm also eager to try.

That is a ton of painting and gaming I'm hoping to do in 2017, and if I even get half of it done I should be happy. How about you? What are you looking to get done next year?
Posted by John at 8:40 PM 2 comments: 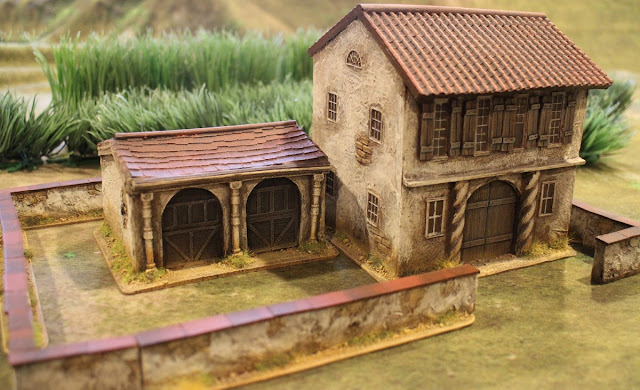 In preparation for our upcoming "Blood and Plunder"games, we've been gathering terrain for our tiny pirates and colonial Spanish to fight over. I built and painted a pair of resin buildings by Brigade Games and while I did run into some issues with them, but I found two life saving tools that I can't believe I've working without. Pics and thoughts after the jump.