Finally managed to finish off my Warlord Games Celt Warriors.  Just a quick pic for now with a final set of tips and thoughts later this week.

Work has taken a lot out of me this week, and I've had little energy to throw into miniatures each evening. I've found that putting in even 5 minutes a day helps keep projects moving along, so this week has seen me clipping Wargames Factory Romans from their sprue and finishing the decals and painting on some Warlord Games Celt shields.

I'm hoping to make some significant progress this weekend. I have 30 Celts just dying to get their shields attached and based.
Posted by John at 9:11 AM No comments:

Got the bases finished off on some Crusader Ancient German archers. Pretty quick paint job to get these on the table quickly.

When I was going through my individually based WWII minis recently I found a handful of Victorian era figures I painted up 10 years ago for some "Gothic Horror" skirmish gaming.

I've only played a few test skirmishes of Hail Caesar, but I realized I wanted to include some on-table markers to help me remember the status and abilities of various units. Even with only a handful of units per side I found myself forgetting which ones had used their Wild Fighters ability, or which were allowed the "Winning" bonus from victory in the previous round.


I thought about creating a unique marker for each potential status, but decided that would be a bit overwhelming, with dozens of extra markers necessary for even my existing units. I settled on a single figure stand with interchangeable color-coded bases to indicate the unit status. It took a little trial and error, but I finally came up with a system that should be fairly simple to both build and use in play. Check out my solution after the jump.

A friend of mine is a WWII nut and recently proposed we break out Crossfire for a few games.  It's been a few years since I last played Crossfire, and with all the hype around the latest version of "I Aint Been Shot Mum" I suggested we give that rules sets a try to see how they compared. I had an older version of the rules that I picked up years ago but never got around to playing, but  rereading them now, I realized my collection of 20mm WWII miniatures were all multi-figure based. It didn't sound like that would work well with IABSM since casualties (kill and wounded) were tracked individually.

I'll be honest, the Warlord Games newsletter always has a lot of tempting 28mm WWII figures in it that have been catching my eye lately. I remembered I had painted up a few individually based 28mm World War II minis about 10 years ago, so I broke them out to see what I had and decide if I wanted to add on to them for testing IABSM.

Not enough for a very extensive game of IABSM, but maybe I can throw in a few U.S. Paratroopers and we can run a quick Normandy squad v. squad action. 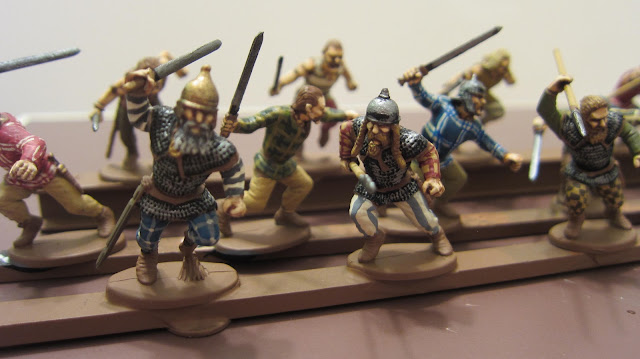 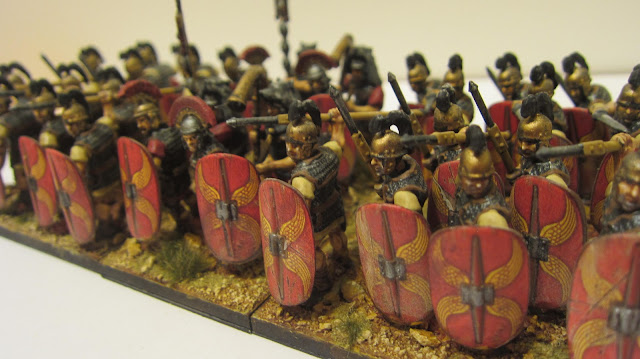 2011 was my return to painting ancients after a three year hiatus.  I didn't even start until the Summer, and a combination of work, family and other projects tended to divert me from miniatures from time to time. That said, I did manage a small bit of progress:

It's not a lot, but I wanted to get it all down so I can compare my progress next year. Here's hoping I can double my output and games played in 2012! :)