INITIAL DEPLOYMENT
Sticking to the true spirit of the rules, I threw every painted figure I have on the table. Which wasn't much.

I''m still learning the rules and kept everything fairly simple. Each side is a single division. There are no commander figures on the board so we're ignoring the rules for proximity to commanders, commanders joining battle, etc.


The barbarian horde deploys along their base edge, between two small woods. The Romans deploy two heavy infantry in the center, one heavy infantry in reserve behind a small hill on the Roman left, and their cavalry in reserve behind a wooded hill to their right. I elected to take the first turn to demonstrate how command rolls, movement, etc. worked.

"Yeah! This is Roman land! You're not comin' in here stupid barbarians!"


THE LINES ADVANCE. TENTATIVELY.
The initial moves by both sides were rather lackluster. The barbarians sent both archer units loping ahead with three successful moves each. But the warbands, ordered to surge forward, merely milled around.  On the Roman side, things weren't much better.

The Roman center slunk to their right, hoping to join their comrades hiding behind the hill.

The following round saw the barbarians got their center moving to join the archers who had advanced ahead of them. The Romans, finding their nerve, advanced as well towards the enemy horde.

Seeing their enemy had found their nerve, the germanic warbands slowed their advanced to discusse strategy ("Should ve charge, or perhaps charge?"), but the archers were now within bow range of the Roman center. They loosed their arrows and set the legionnaires into disordered panic.


With the sounding of their trumpets, the centurion of the Roman left gave the order, "Advance to the top of that hill and prepare to beat down those punks! Also can you get me some more wine? Thanks honey." 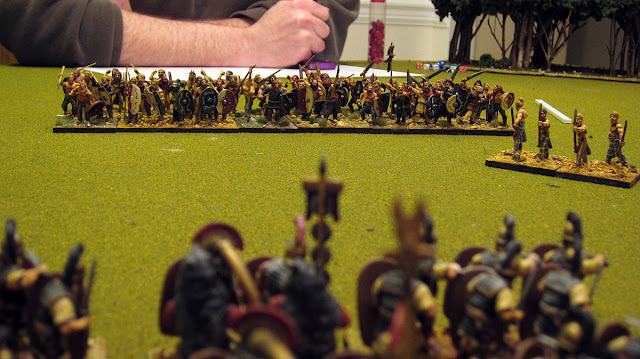 With the barbarian horder drawing close, the Roman center unable to recover from disorder despite their Drilled trait, the Romans order their flanks to advance.

The Numidian mercenary cavalry on the left flank succeed at their command roll with a massive three moves. Although they were in line of sight of the Germans at this point, I ruled they could perform an end run around the wooded hill as long as they ended their move pointed towards an enemy unit.


With enemy cavalry to their rear, the warbands attempted a risky three move charge to come to grips and break the Romans in one blow before the cavalry could charge. Unfortunately, the matter was still in debate ("Vait. Olaf says ve should charge, bud Helmut makes a good point that ve should probably charge. Maybe ve haff drinking contest to decided who is right, ja?")


Seeing their opportunity, the light cavalry charge the barbarian rear, while the Roman left atop the hill charge down it into pila range of the enemy archers, and the Roman center surges forward to drive off the archers on the opposite flank. 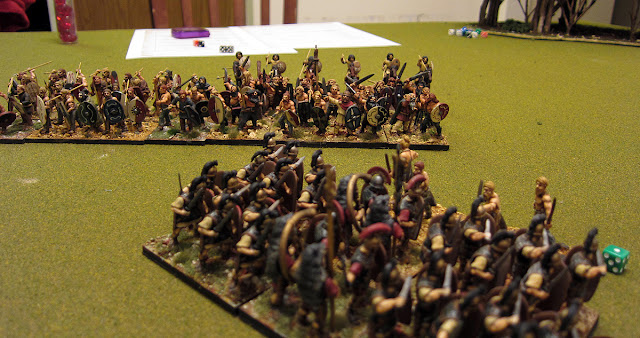 Combat ensues, with disastrous results for the cavalry. Despite being attacked to their rear, the German barbarians are still fearsome and inflict enough casualties to force a Break Test which sends the Numidians back to Africa.

Seeing their mercenaries flee sets the Roman blood to boil. They continue to advance on their left, driving the archers farther from the hill, and gaining a good position to the barbarian flank.

On the Roman right, the legionaries charge and batter the barbarian archers on that flank. In the ensuing melee, the Roman center manages to Shatter the archers. Their commanders take a moment to pile the enemy bodies and perform a victory celebration to Mars upon them.

THE LINES CLASH
With the lightly armed troops routed, both sides turned their full attention on their main battle lines. The Romans were able to close the distance first, and charged the warbands, while the Roman reserve turned from the base of the hill into a flanking position on the barbarian line. Things were suddenly looking very poor for the hairy Germans.

With the Roman right bloodied from the attentions of the now Shattered archers, the melee began on the Roman left. The ancient sky gods left the Germans at this point.

"Ok, the Romans won the combat here by three casualties, so I need to roll a Break test at -3."

I explained the term. Then we learned about Moves by Victorious Units. Also, Closing the Door and Rolling Up the Line.


The remaining melee saw a half hearted attempt by the final warband, but suffering from the Attacked on the Flank penalty they scored a single measly hit which was saved. Another round of combat ground the last vestige of resistance from the Germans. Leaders were executed, captives sent to Rome, a wine cups were drained by the victors (literally).

REPORTS SENT TO ROME
Wow! So fun! I don't have nearly enough figures, my terrain needs work, and I still haven't learned my lesson about exposing my flank, but I really enjoyed the game. My wife liked it too and we discussed bringing in some of our other friends for larger games.

Her Review: "It's like a board game, but it's cooler because you painted all these little guys. And the rules aren't hard. It's like, 'Just move that guy about six inches and whatever.' I like that."