Taking Lion Rampant for a spin

I've been painting up medieval figures since since Christmas in the hopes of getting to try Lion Rampant. I finally finished enough figures to try out a 20 point game and told my son he could get out of chores by rolling some dice with Dad. Check out my trial game after the jump! 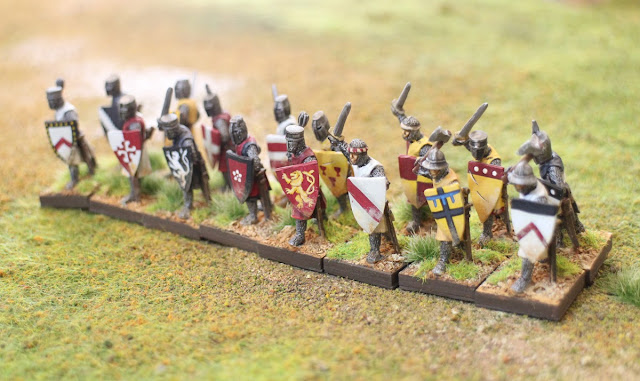 I just finished up some foot knights by Crusader Miniatures, ready to go for some Lion Rampant. When I was painting my mounted knights I replicated the heraldry and colors of knights I could use for a variety of battles during the late 13th and early 14th century. For this batch I played it a little looser, looking to create three groups of knights fielding similar colors for use in Lion Rampant.

I also took the opportunity to sneak in a little "local color." I live in the state of Maryland, the only U.S. state to feature a heraldic device on its state flag (don't be jealous. Also we have delicious blue crabs. I think that's the sum total of facts you need to know about Maryland!)

I thought the quartered flag on a single shield would be a little busy, so I split the individual devices across two different knights. The contemporary state flag features the devices of the Calvert and Crossland families (which were combined into the heraldry of Cecil Calvert, the first Lord Baltimore), so perhaps these knights are ancient members of those families. 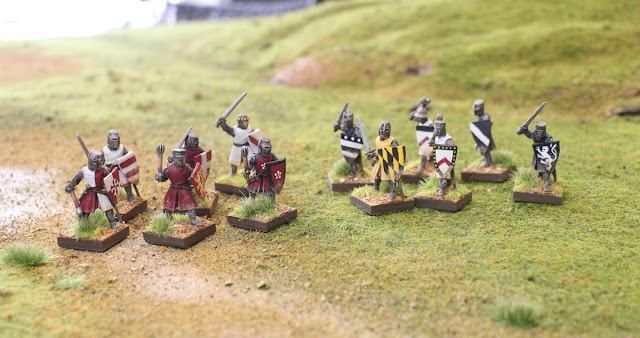 I really dig Crusader's figures. I'll be trying out some other manufacturers soon but I think these miniatures will be tough to beat for sculpting, heft and price.