After playing his first game of Battletech my son declared "We HAVE to play a campaign!" Needless to say, I jumped at the opportunity and dug up some of the old campaign books I had: First Strike and The Dragon Roars. After flipping through them though, they weren't quite what I was looking for. Getting up to speed with the changes Battletech has gone through since I stopped playing 20 years ago, I discovered there was an entire rulebook dedicated to campaign play, Campaign Operations.

I've looked for tutorials, advice or a play through of using Battletech's Campaign Operations but couldn't find a description of how the rules actually worked. Since I managed to muddle through the detailed rules ("I'm shocked! Shocked to find detailed rules in Battletech!") for setting up a mercenary group with the rules, I thought I'd break down the process in case someone else was struggling with the same system.

The first decision the company commander needs to make is the type of force they'll be running: House (ie; a formal branch of the standing military of one of the great Houses of the Inner Sphere), Mercenary (soldiers for hire) or Pirate (which can cover everything from "freedom fighter" rebel militias to savage Periphery criminals.)

My son decided on a Mercenary band and we rolled on the starting funds chart. Starting funds could generate millions of C-Bills, enough to outfit and entire company of assault mechs. I wanted to start something a little more reasonable, so we rolled 2d6+1 (instead of the 3d6 suggested by the rules) for starting funds, resulting in 40,000,000 C-Bills my son would use to begin purchasing mechs, vehicles, equipment and hire employees.

I got started with Battletech in the late 90s when the Clan invasion was in full swing, but Clan society has never really sat well with me. I've always gravitated to the Inner Sphere factions, and really dug the interstellar Mad Max vibe of the original 3025 setting. To give us plenty of runway, I'm setting our game in the year 3000 and gave my boy a copy of the Succession Wars Technical Readout and some print outs of the missing "unseen" mechs.

From that catalogue he made a list of mechs he wanted to try and we started in on the rules to acquire them. For each mech he selected he also needed to choose an experience level for the mechwarrior pilot who owned it, which established a difficulty number that needed to be rolled over on 2d6. I suggested he start with the best, gunning for Elite pilots (needing a 12 or higher), before trying Veteran (11 or higher), Regular (10+) and so on. You can't attempt to acquire the same mech of the same pilot experience twice, but there's no penalty for making multiple attempts to acquire a mech of different experience levels. There's always a chance of rolling a 12, so might as well try to get the best to start!

If a roll was successful, the mech is available for purchase and its purchase price is deducted from the bank of C-Bills. My son went for a few cost friendly vehicles and organized everything into three lances, with about 4 million C-Bills left over. 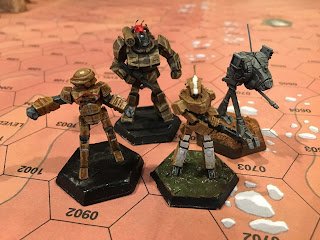 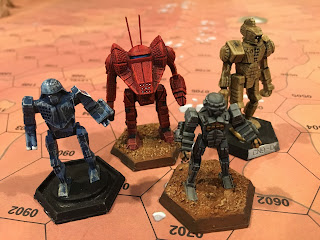 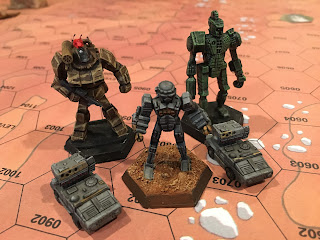 To personalize his crew we also rolled up some random pilot callsigns, and he picked "Razor", the mechwarrior piloting the Dragon heavy mech, as the company commander. Thus, "Razor's Raiders" were born. We also rolled up some individual stats for Razor according to the rules (not having access to the more detailed mechanics in the Battletech RPG), each a simple 1d6 roll:
Quite a mix! We decided he was a blunt, hard charging warrior with little time for the intricacies of planning and logistics, but who inspired devotion in the men and women he lead and was a terror on the battlefield once combat was joined.

The next thing to tackle was all of the details of personnel, wages and maintenance costs. Each mech and vehicle requires a senior tech and associated assistant techs. The company as a whole needs administrative staff, as well as drop ships and jump ships (strangely, the rules just give you space transport assets for free). All of the members of the company have salary requirements (modified by experience and role) and each mech, vehicle and spacecraft have ammo, fuel and maintenance costs. Everything is covered in excruciating detail. It didn't make any sense to my mind why you'd want to record all of this, but this is Battletech where it seems every piston and actuator of a 3-story warbot is accounted for. Par for the course.

After collating all of this data into a spreadsheet, I had a monthly operating costs for the company as a whole: 1.3 million C-Bills. With a bank of 4 million C-Bills, Razor's Raiders would need to find a paying job soon, or they'd be out of business in just a few months.

As expected the rules for negotiating a mercenary contract are just as detailed an intricate as the rules for things like mech construction. Die rolls determine the number and nature of contracts, with subsequent rolls detailing pay structure, salvage rights, client oversight, transport costs, and more.  Somewhat baffling, the contract rules don't appear to interface with any of the rules for actually running a campaign. That seemed to be a pretty big disconnect, but as near as I can gather Campaign Operations is a bit of a hodge-podge collection of rules subsets that have been published over the lifespan of the Battletech game. The Game Master will need to squint and fudge things to couple the detailed company creation rules together with the rules for actually running the campaign.

There are three strategies outlined in Campaign Operations for managing a series of linked scenarios:
The Warchest campaign looked interesting, and I hadn't seen anything quite like it in other rules. Because the warchest points are abstract, there's quite a lot of fiddly extra rules to convert between them and the highly detailed C-Bills of the detailed mercenary rules.

Hacking the Campaign Together

In Campaign Operations, 1 warchest point converts to 1 x (base force size multiplier). Razor's Raiders consists of 3 lances, so my son's base force size is 3. Support points can then be converted to C-Bills, at 10,000 C-Bills per support point.

My disconnect came from the initial 1000 warchest points that all campaigns seem to begin with. There don't seem to be any rules for converting existing mechs, ammo or cash reserves into warchest points, and since a successful campaign will wind up with 1000+ warchest points (doing a little math here, that converts to 30,000,000 C-Bills) I was worried about the campaign spirally into Monty Haul-ism from the get go.

I decided to hand wave the initial investment of 1000 warchest points, and assume that covers all of the detailed minutiae we created during company creation.

Once a contract is completed, I'll have the merc company "cash out" their warchest points by subtracting the initial 1000 point investment and converting the remainder to C-Bills (which should give a profit of 5 million C-Bills, with an upper end of 15 million if my son takes every optional complication and completes every objective). If they do very poorly in the campaign and wind up with a negative balance I'll need to dock the company's cash reserves.

Once I had an outline for the type of campaign I'd be running and general economics, I was able to provide Razor's Raiders their first mercenary contract after inception: 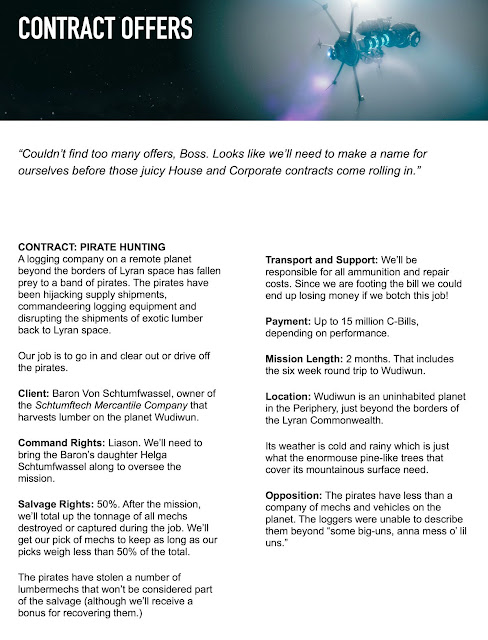 "Mechwarriors, to your stations!"

The rest of the campaign set up was a breeze. I put together a handful of missions with background, options and objectives, printed everything out and got ready to play. I'll post the various After Action reports from our campaign to log how it develops.
Posted by John at 8:10 AM