The last time I played Battletech was with my roommates just after college. We all loved the game, or the "concept" of the game, but after failing to finish an actual battle due to fatigue we decided the rules were just too slow, cumbersome and detailed for us.

I packed up my figures and maps, sold all my unpainted, mint-on-card Unseen on eBay and closed the chapter on "Battletech" in my life.

Then Harebrained Schemes released a Battletech video game in the spring of 2018 and giant, stompy, overheating robots got their hooks back into me hard. The video game is a nearly perfect translation of the tabletop game to digital media. Discussing it with my nearly 10 year old son while he watched me play we talked about its origins as a board game, which naturally led to getting my old minis and maps out for "old time's sake", resulting in my son falling in love with the tabletop game, which of course led to the purchase of dozens of new mechs, terrain and updated rules and a plan to run a multi-game epic campaign. I mean, of course.


Returning to the game after two decades, many of the things that bothered me then are no longer an issue now, because I've come to realize you can just change the game to make it what you want.

Here are the various house rules we've been experimenting with to speed the game up so a battle can be finished within the attention span of a nine-year-old.

Battletech games take for-ev-er. I know Alpha Strike speeds things up, but I feel it removes too many of the fun details that make Battletech unique. Instead, we've implemented a morale system to simulate forces savaged by the enemy making a hasty retreat when the going gets tough. Honestly, if these mechs are hundreds of years old in 3025, they should be bugging out once it's clear the enemy is gaining the advantage.

Each side starts with a morale total. +4 points per mech, +1 for each infantry stand or vehicle. A standard 4 mech lance will thus start with 16 morale points.

A force loses points whenever one of these events occurs:
This weights forces towards light and medium mechs, and should encourage bringing vehicles and infantry along as a morale buffer. Losing a heavy or assault mech should be devastating to a force's morale.

These morale rules are similar to the Forced Withdrawal rules now in Battletech (which I don't think were present 20 years ago), but Forced Withdrawal requires mechs to be Crippled, which is pretty much the same as destroyed in my opinion. Our morale rules should end the game while there are still quite a few mechs on the table, which is fine because I have to mow the lawn and the boy needs to get his homework done.

I can't be bothered with vehicles. I want them on the table as flavor, but I don't want to track armor facing and critical hits and other detailed garbage for speed bumps. Here's how we are running them: 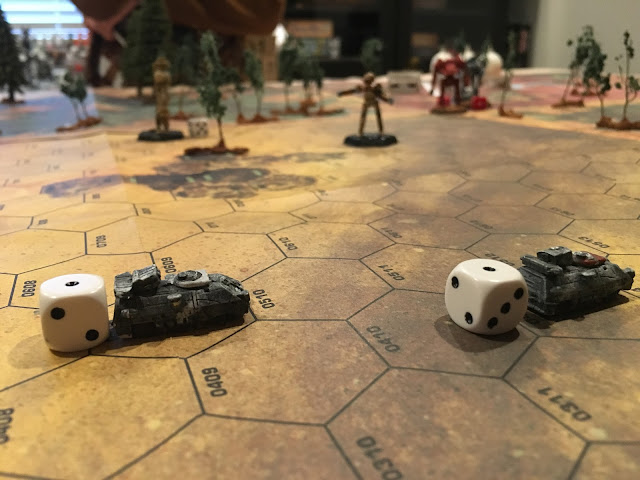 AC2s and AC5s need a little love. The video game increases their damage and gives them (along with missiles) a greater chance of knocking down enemy mechs. I don't want to go monkeying with the stats of autocannons too much, so we're experimenting with adding an impact to target stability.


This really only hampers the mech if it suffers 20+ points of damage in a round, or is the victim of a kick or something. Once it activates, the piloting penalty goes away. Just a little something extra to juice autocannons.

We played a few test games, but my son wanted to play a "campaign". I've been furiously reading up on rules I haven't touched in decades and gathering figures and terrain, and we've begun some linked scenarios that have been a lot of fun. I'm still playing quite a bit of Imperial Assault, Star Wars Legion, and a variety of games with the SCRUM club, but I'll be posting a bit more of these Battletech games here, at least until I get distracted by something else.
Posted by John at 8:11 AM