My First Ancients, Finished and Based! 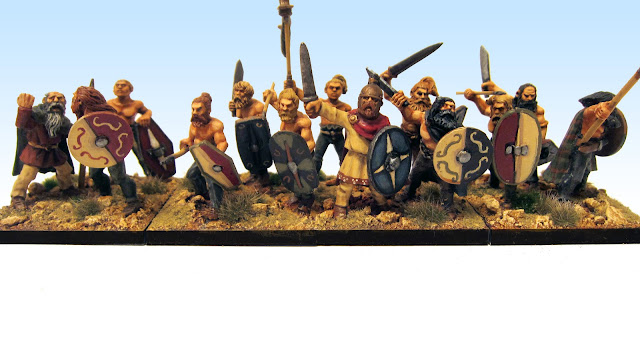 Finally got my first Ancients completed. Still have many, many figures to paint up, but this is an exciting milestone for me. More photos after the break.

Ancient Germans
First up are a whole buncha barbarians.  I picked up a number of Foundry Ancient Germans years ago. Most were clothed or bare chested, but there a pair who were naked. I bought a second hand lot of miniatures including a number of Celts, Germans and Picts.  I used them to flesh out a few Ancient German Fanatics bases. Also hand painted the shields based on the designs I worked up in a previous post.


The shields are fairly basic geometric designs. I wanted to keep them simple to provide a contrast to the more intricate shields I have planned for the Celt warbands I'm going to put together.

I worked out a pretty quick method for painting these fleshy barbarians.  I primed them with Army Painter brown, and then gave them a quick coat of Army Painter flesh from a high angle to preserve darker tones in the undercuts out of the flesh spray zone. A basic Vallejo medium flesh tone to block out the major muscle groups, and a highlight of Vallejo light flesh finished off their skin.  After painting hair, eyebrows and any furs or capes I gave each figure a wash of Army Painter soft tone which really helped pull the entire miniature together. I was originally skeptical of the Army Painter dips, but now I find them essential.

I really liked the shield transfers that came with the set. They went on fairly easily, Wargames Factory provides extras, and they look nice.

Basing Trial and Error
Sadly, I did run into a few hiccups. These were the first really large bases I'd ever worked on, and with my first few attempts the results didn't turn out as well as I'd hoped.
With the first few bases I started with a burnt umber, followed by a drybrush of yellow ochre, then a drybrush of gray and finally a very light drybrush of white. That didn't look to bad without flock, but once flocked the base looked dark, mottled and unrealistic.

All in all, pretty happy overall and looking forward to rounding out a few more ancient Germans before moving on to either more Romans or some Warlord Games Celts.