The gameplay of MWO is a bit faster paced than WoT, but not quite to the intensity of other first person shooters I've played. When I first started playing MWO I was a bit overwhelmed by the visual effects and camera shake in it. In WoT you'll get hit by a round and there will be a sound effect and slight visual indicator. In MWO, rockets and lasers are all up in your face, your mech is slewing badly from all of the weapon impacts, there are sirens going off because of your heat overload. Once I got used to the impact effects I realized you could ignore them and concentrate on your own weapon reticle and sensors the game became a lot more manageable. Also, standing where you can get pummeled by multiple enemies is jut a bad idea overall. 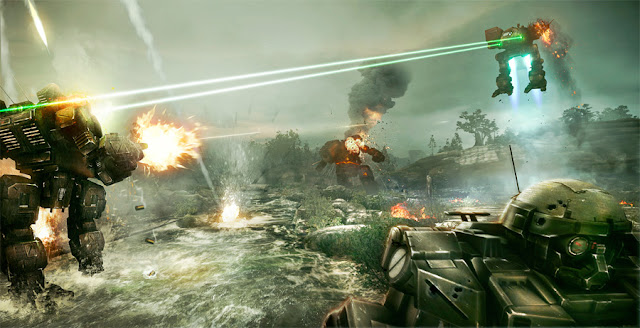 Unlike in WoT where you are forced to grind up XP trees to unlock tanks, where higher tier tanks are always better than lower tier tanks, and after moving up a tier there's really no reason to use an older tank, MWO introduces a number of improvements:

That's not to say MWO doesn't have drawbacks. There are a number of areas where WoT presents a more polished experience. One of the highlights of WoT for me is destroying property. Driving over a white picket fence, knocking down utility poles, bursting through a barn to take shots at an enemy on the far side gives me a visceral thrill. The landscape in MWO is static and unchanging in MWO, but destructible terrain has been promised in an upcoming patch. MWO does feature pretty intense destruction effects on mechs though. Seeing my weapon impacts turn parts of the enemy mech white hot from the heat of their destructive power or watching one of their arms cartwheel off in a shower of fire, smoke and debris ejected by a solid impact from my gauss rifle is a nice substitute.

There are only four maps compared to the wide variety in WoT, and as a group all four maps in MWO are ugly, dim and hazy. I'm hoping upcoming maps give a broader vista to fight over. Despite their grungy aesthetic, the much reviled "Assault" game format from WoT has not shown up in MWO.

Still, with all of the entertainments available (and we really are spoiled for choices), I find myself gravitating back to Mechwarrior Online, even for a few quick games in my Commando. The game is still in closed Beta, but I expect them to release the Open Beta soon. The game should be free both before and after launch, but even now you can purchase in game credits to unlock new mechs and weapons faster than playing the free version. Keep an eye out for it and give it a spin when it launches, it's fun :)
Posted by John at 3:00 AM