I was playing the Gauls. In previous games of Hail Caesar I had relied on command rolls and risky maneuvers that wound up in disastrous attacks against the Romans. This game I decided to move safely and methodically, using initiative moves (which don't require a command roll) to slowly move into mid field with my battle line, using the hill and woods to anchor my flanks.  My missile troops would stay in front of my main line to pepper the Romans with arrows and rocks, ready to retreat through my own lines if charged. My medium cavalry I kept in reserve, ready to exploit a gap, or cover my flank.

Throwing the scenario together we decided a unit could cross the river with a d6 roll of 4 or higher. The Romans placed their Cretan archers at the bend in the river to cover their own flank with ranged fire until they could get all of their troops across and formed up.

I stuck to my plan, moving forward slowly, but was surprised by both Roman units crossing the river in the first turn. Seeing things already starting to slip away from me, I rushed my missile troops forward. Some very lucky rolls broke my way and saw his Cretan archers broken after a single volley. 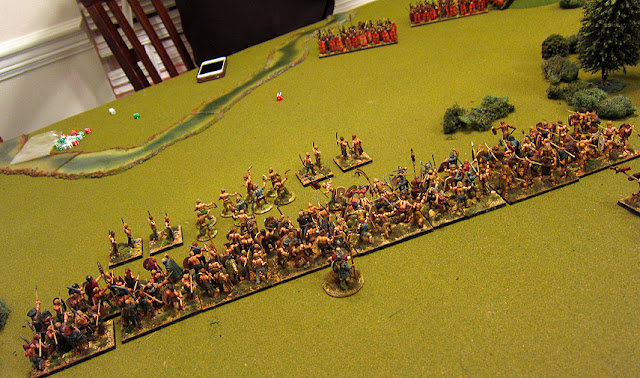 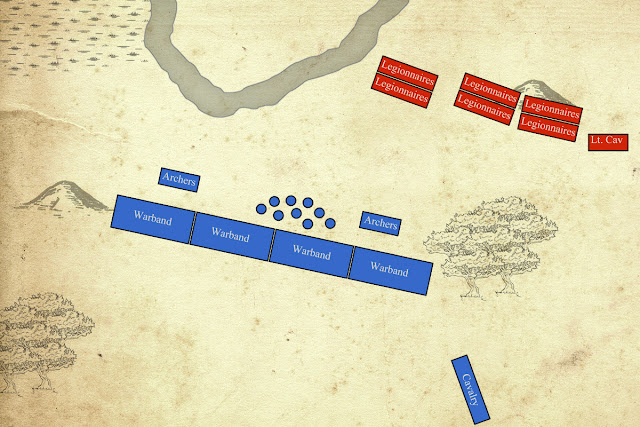 As I crept forward, the Romans used their time to dress their lines and send their Numidians towards my right flank. "Ah ha!" I thought, "Not a problem!" I sent my cavalry towards the gap on my right, ready to drive off the inferior Numidians. 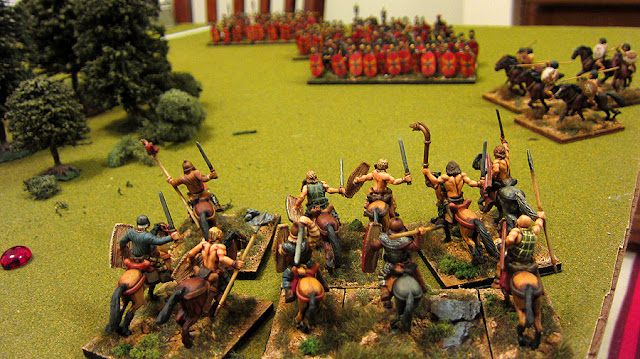 My confidence was quickly shaken when Mike gave a division order to his entire line to rush my right flank. He rolled a triple move, and though his lines began to break up, it was clear I was suddenly in a terrible position. 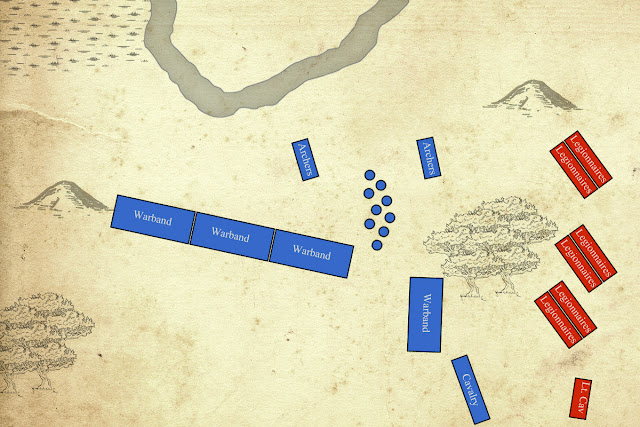 I didn't think my main line was nimble enough to make it around the woods into his flank, and my cavalry wouldn't last line trying to hold off the Numidians plus four heavy infantry. I started shifting my line to try and get my infantry into the gap on my flank. One warband made it, but the remaining three warbands had to spend their turn consolidating in the hopes of charging into battle on a subsequent turn. 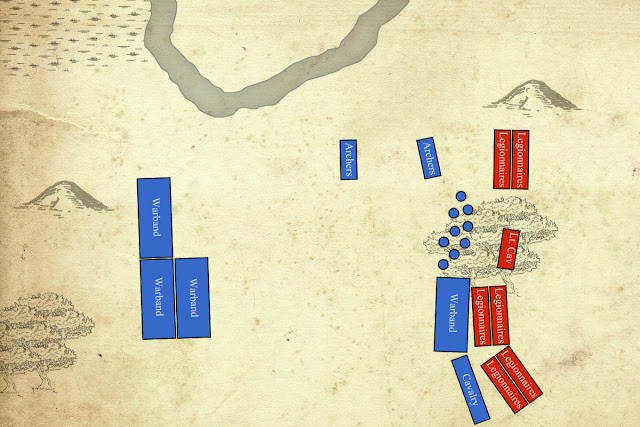 The Romans pelted my cavalry with pila and javelins, managing to disorder them repeatedly  I couldn't even charge his infantry with my disordered cavalry, so it fell to the single warband I managed to move into the gap to fend off his attack. 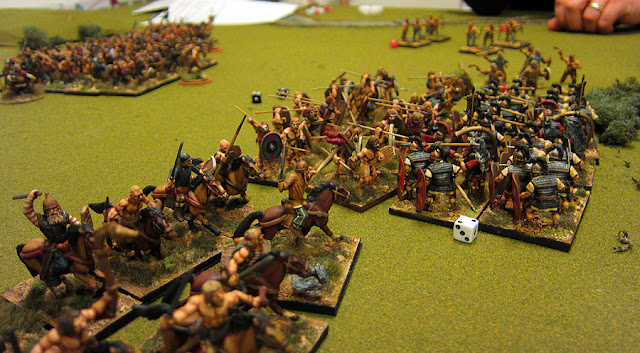 My missile troops fared better. They drew off two of his infantry units and the Numidians, and decent rolling kept the Romans disordered, and evading backwards out of their reach when charged. 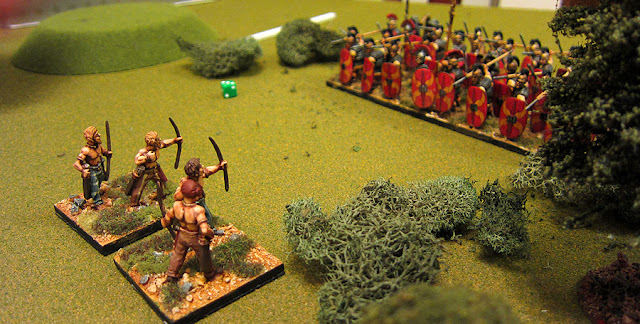 In the gap, things quickly went south for my Gauls. My warband was destroyed  and follow up moves by the victorious legionnaires saw my cavalry surrounded and defeated. 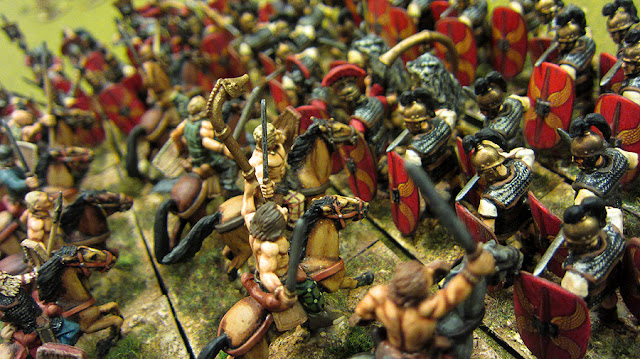 Taking a look at the battlefield I realized I needed to fall back and redeploy on the ridge that was on my left flank. 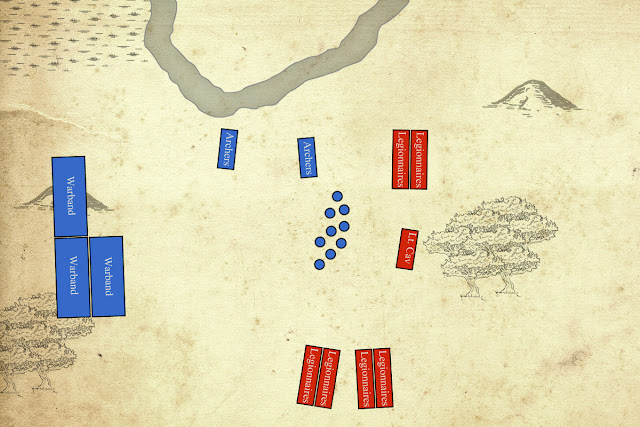 My archers continued to fall back, but my slingers got caught between two of his infantry units. 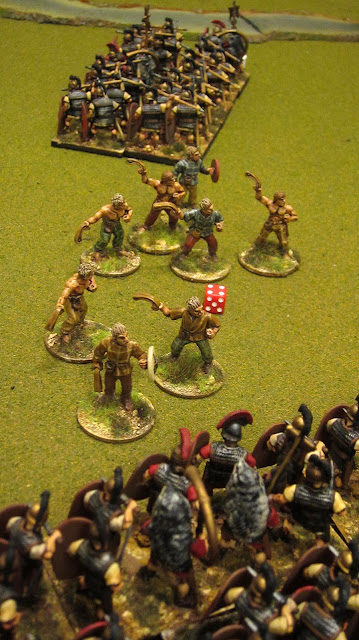 Charged and unable to fall back into safe territory the slingers were overwhelmed. The Romans were taking a toll on my Gauls, but most of their units had taken a beating. I still had three fresh warbands, all still with their Wild Fighters ability ready to use. Wild Fighters allows any missed attacks to be rerolled on the first round of combat in the game, and with their huge number of dice available to the warband when it charges I thought I had a good chance of turning the battle around.

As the Romans redeployed my archers were even able to break one of their infantry units. This was totally going to work. 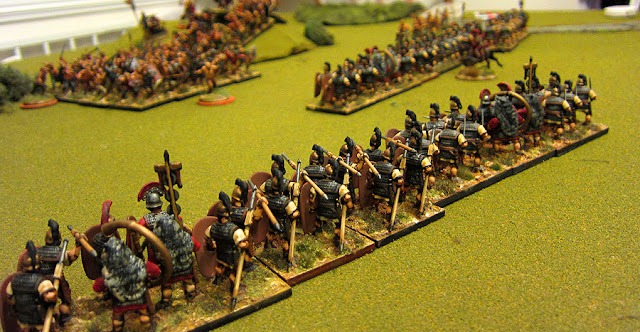 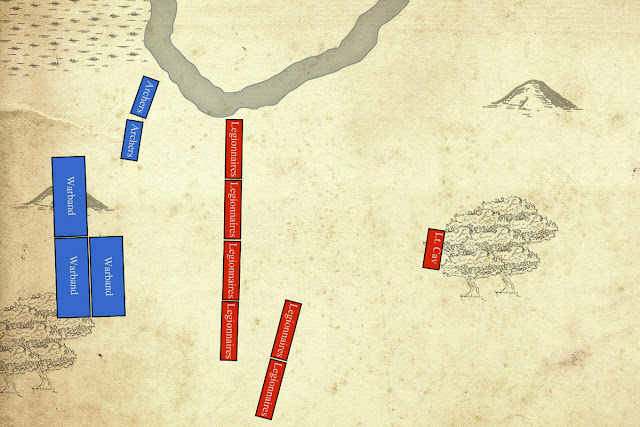 My Gauls, still fresh, held the high ground, and began pelting the Romans with javelins and arrows as their lines approached. Unfortunately, the Romans all had a hell of a throwing arm and were rolling quite a few more ranged dice than the barbarians. In an extended archery duel the odds were against me. With one of my warbands thrown back and disordered by Roman pila, I had no choice but to throw everything at the Roman line. 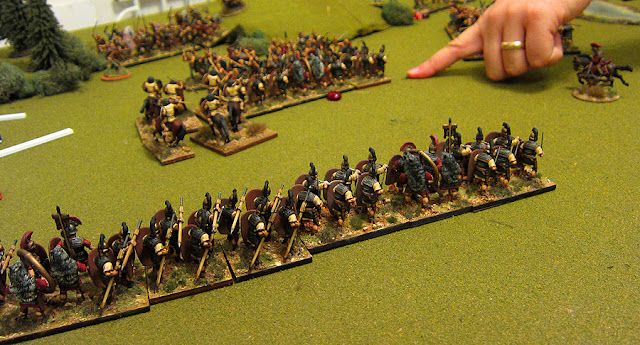 My surviving Gauls rushed forward, crushing and throwing back the Romans on one line, but unable to break through. 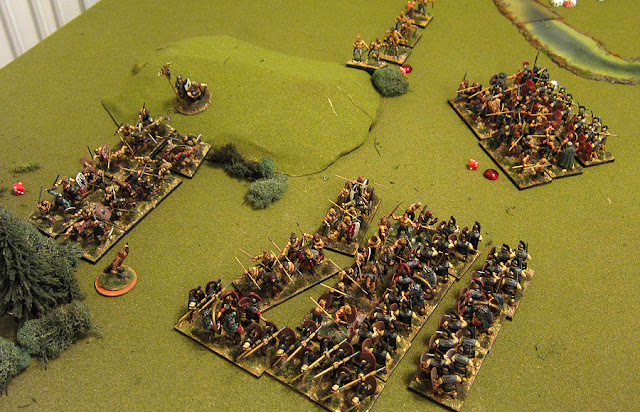 On the Roman turn they moved all of their troops into support. Against the crush of numbers and now using their sustained combat rating rather than their clash dice the Gauls fell before the onslaught of Rome. 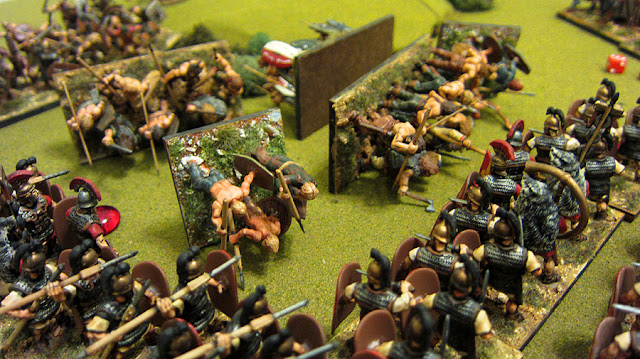 As soon as the Romans got both of their units across the river on turn one I knew things were going to be tough for the Gauls. Despite the uphill climb and eventual defeat, this was a heck of a fun game. Do you see how much those lines shifted, redeployed, fell back and charged again? We were sure to check proximity to enemies, and did our best to make sure all of our moves were legal, and this battle was much more dynamic than I expected an ancients battle to be.

Mike and I both had to constantly refer to the rules (life's been busy, so we're both rusty) but we both agreed it was a fun battle. I keep bopping from one project to another, but some allies for the Gauls are in the pipeline so the next game won't be so lopsided.

In retrospect I can see a number of places where different decisions could have given me a greater chance of victory. I'd love to get some additional tactical advice though. What would you have done differently?