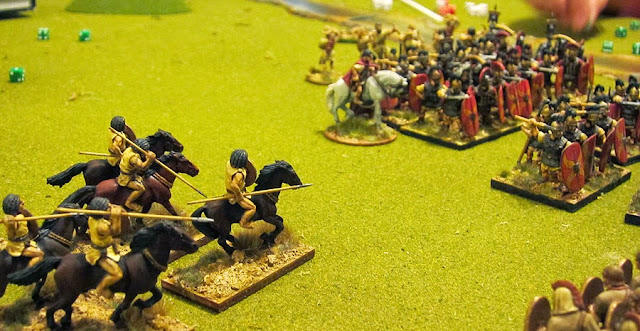 "Hey, for our Hail Caesar game tomorrow, let's do something different this time" my gaming pal Mike said, "Not just a line 'em up bash."

No problem. I'd been looking forward to trying a Table Top Teaser and this seemed a great chance to shake things up with a new scenario. I flipped through the collection to find something suitable, which proved a bit challenging as most seemed to work better for more modern armies (Horse and Musket or later), or required a ton of cavalry or terrain. I finally settled on "Infantry vs. Cavalry" and "Ambush". Check out our battle report for Cavalry Attack after the jump.

I didn't have nearly enough cavalry to run cavalry attack, but quickly finished up a small unit of Numidian cavalry (please excuse the block painting and unfinished bases) and tried converting the suggested forces to figures I had on hand. The terrain also needed some modification as well, but the vital hills, river and layout were close enough to work.


The Romans begin the game in column, marching along a river when they are surprised by a (mostly) cavalry force. We set up the Romans according to the scenario map, two cohorts per side, with Cretan archers in the middle, all in column formation.
The Romans begin nearly in the middle of the table, with a series of hills and rough ground to the north that will provide an escape from the cavalry attackers. Should they manage to reach the rough ground, the Romans will win the scenario.


The Celts are free to set up along the western table edge in an angled deployment zone. As the Celts, I placed my two light cavalry and one heavy cavalry towards the north, ready to dash across the table and cut off the Roman retreat to the north. Two warbands and a Spanish medium infantry unit took the southern half of the deployment zone, with a small unit of celt slingers just in front of them.

The Celts, springing their trap, received the first initiative. I ordered my cavalry to charge, one small unit swinging north to stall any Roman advance to the protected ground to the north, with the rest of the cavalry charging straight ahead to engage the boys from the boot as quickly as possible.

I rolled well, getting my cavalry into position, but failing to engage the Romans in combat. The rest of my infantry moved along the river, but remained beyond javelin range.

With initiative passing to the Romans, my opponent Mike realized he needed to get his Romans out of march and into a defensive position. A lengthy discussion occurred in which Mike I negotiated the sophisticated maneuvers he wanted his tiny lead men to engage in, while I asked him to reconsider the complexity of his commands for something a little simpler. After quite a bit of back and forth, his troops finally fell into a crescent formation, one side facing the onrushing enemies, the other facing the river to prevent a flank attack.


Neither of us were quite sure of the legality of the maneuver  but in an effort to get back to the game, we decided it was good enough and got on with it. The Romans loosed sporadic ranged attacks, but dealt few casualties.

Having failed to take advantage of the Romans initial vulnerable position, I had to console myself with the fact that they had to drop into a defensive position rather than simply making for the hills. Feeling confident, I went for broke, charging my warbands towards the Roman line which evaded back out of the way. Of course, this is totally illegal since they are close order infantry, but neither Mike nor myself caught that rule in the moment.

On the other side of the line, my medium cavalry supported by light Numidian cavalry crashed into the Roman line.


But after a horrendous round of combat, were forced to recoil!

Having rebuffed the Celtic attack, the Romans see an opportunity to deal some damage.

The Late Republic Strikes Back

The Roman left which had just evaded, charges the warbands, completely obliterating them. Their defeat was so quick the only evidence that remains is this pic of the victorious Romans, bloodied and disordered, but still in the fight.

Having been dealt a serious blow, I felt I need to attack. On the Carthaginian initiative I sent my medium infantry into support another cavalry charge and ordered the advance.


Again the two lines collided and again my cavalry performed miserably, routing off the table following a dismal 3 on the break test. With three out of six units routed, and finally realizing that formed infantry can't evade along I decided to concede the game. There was little hope to stopping the Roman juggernaut with only light troops remaining.

Had I not been so eager to come to blows, or realized that I didn't have quite the numerical advantage I thought I had, I would have proceeded more cautiously and perhaps made a better showing. Also, I love Hail Caesar, but it could really use a proper glossary and index to help quickly find rules questions. Still we had fun, and since the first game went by rather quickly, we decided to try out the other Table Top Teaser, "Ambush". That write up will need to wait for another time though.