Saturday was our big gaming day, with games scheduled from 9am until 11pm. Luckily they were all a blast. Check out monsters, mutants and an ironclad after the jump.


We started the day in the HAWKS room with Dungeon Hack. Each player received a classic dungeon crawling party with the simple goal of invading a den of evil, slaying those inside and escaping with loot. 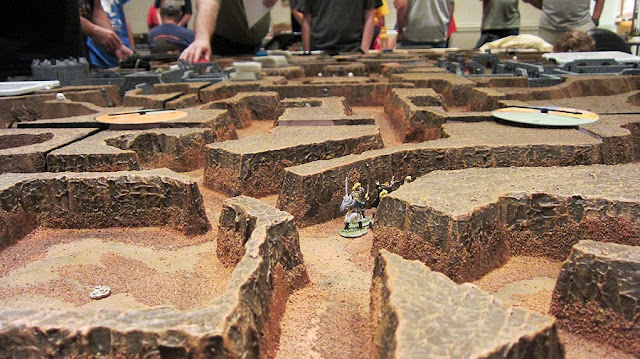 Messing with dungeon features (bones, crypts, devices, etc), treasure chests or evil skulls required a spin on one of three spinners to discover the action's result. The spinners were essentially percentile charts (a trap that had a 75% chance of triggering took up 3/4 of the spinner's pie chart) but something about flicking the spinner, and watching that arrow slow down and approach "death" but just slip past to "nothing happens" was more fun than simply rolling on a chart.

Monsters were spawned once your party drew within line of sight of skull tokens littered throughout the tunnels, and were controlled by the player to your right. The whole set up ran very smoothly with our gamemaster Noah mostly encouraging our fool hardy investigations of dungeon features or happily cheering each demon spawn, sprung trap or petrified player character as "excellent!"  Great game!

I dashed from Dungeon Hack to Miles Reidy's Black Powder game. This was my first time playing Black Powder, but Miles assured me my Hail Caesar experience would transfer. The terrain by Architects of War looked great, and Miles ran down the rules briefly with just enough information to get started and make informed decisions on potential actions. 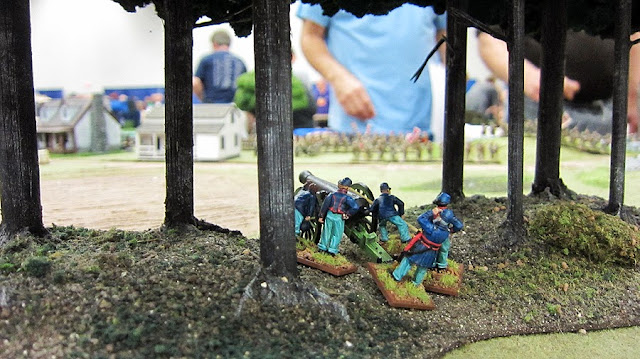 I took the Union cavalry reserves which started off board at the beginning of the game. We controlled a vital carrot field, the Rebs held a strategic chicken coop, and an important hill dominated the center of the table coveted by both sides. Whichever army controlled two of the three objectives when the game was called would win. Although outgunned by the Confederates we were assured that a captured ironclad would make an appearance to even the sides up. 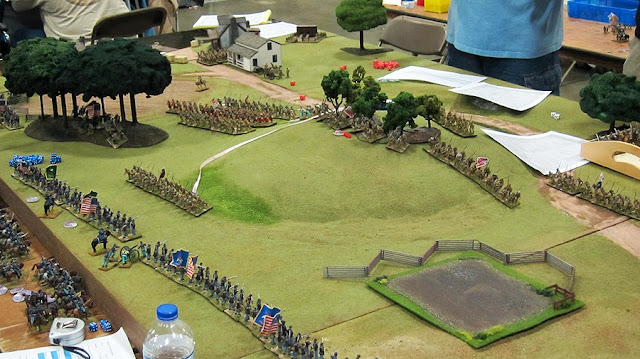 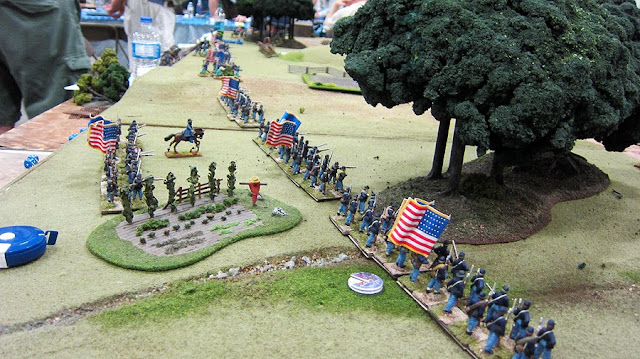 Our right flank and center spent most of the game holding position, protecting our objective and shooting up the Rebs who crested the hill and swiftly descended into bayonet range. Our left flank advanced slowly, whittling away at the Confederate center and opening a gap to their chicken coop objective. 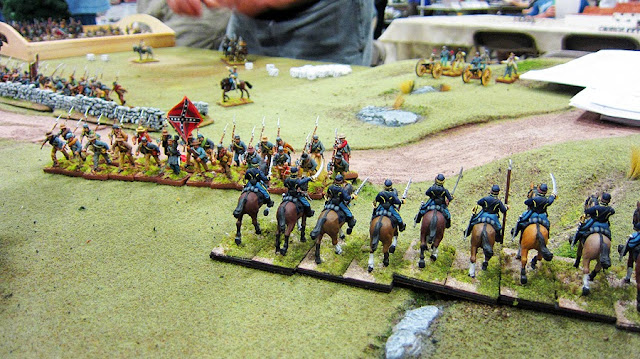 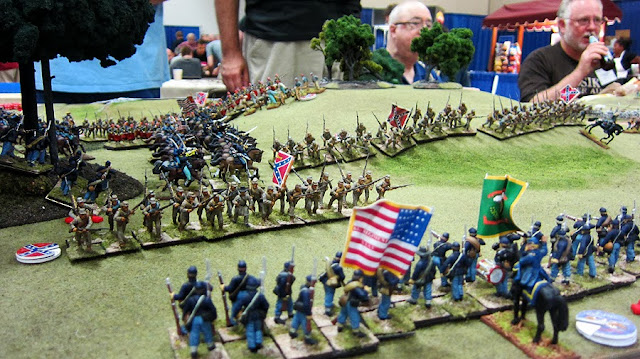 My cavalry looked mighty impressive making an appearance on the left flank but I kept thinking of them like Gallic cavalry and discovered charging enemy cannon or trying to crush Rebel zouaves was a bit different than running down Cretan archers! 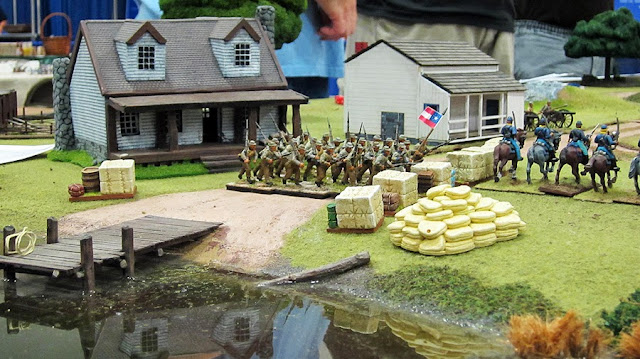 The ironclad's dramatic arrival was marred by it running aground, its guns blocked by a pair of farmhouses! Luckily our infantry had chewed up the Rebels enough that the Union were able to seize two of the three objectives and take the day. 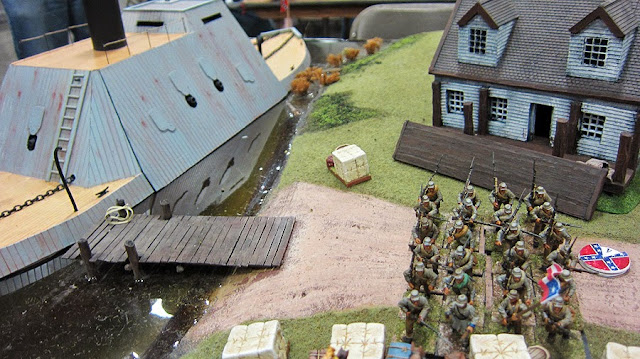 "Bad Day in the Neighborhood", This is Not a Test

After a trip to the local Japanese hibachi house with family and friends, Mike and I were back to gaming with an evening of post-apocalyptic skirmishing. I was eager to try This is Not a Test after reading the play test run by the Chicago Skirmish Wargamers. The terrain, inspired by the Fallout series of video games, was excellent. Each player received a band of wasteland warriors to fight over the spoils hidden within a number of buildings in the town. 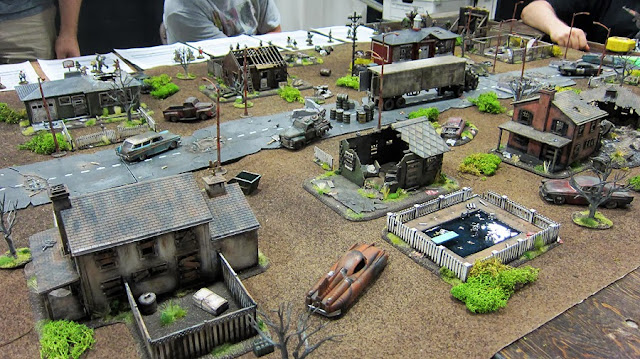 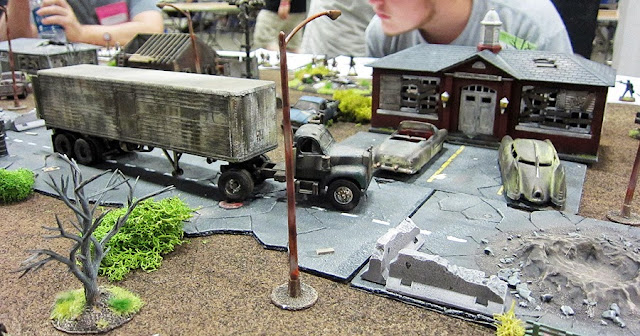 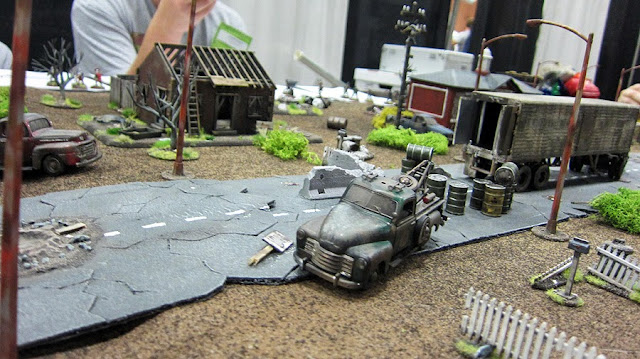 The game is d10 based, models rolling a die and adding a stat in an attempt to beat a 10. Each model requires a roll to activate (but a round doesn't end until all models have activated), and combat requires a roll to hit, damage, and possible morale effects. 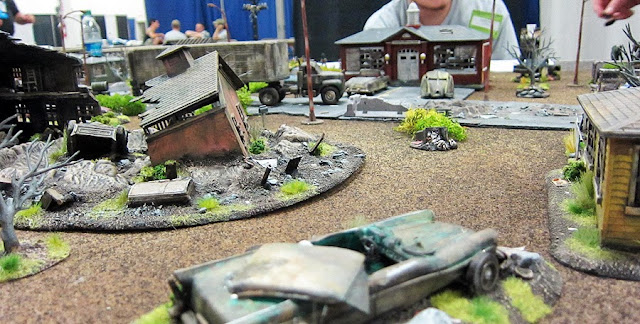 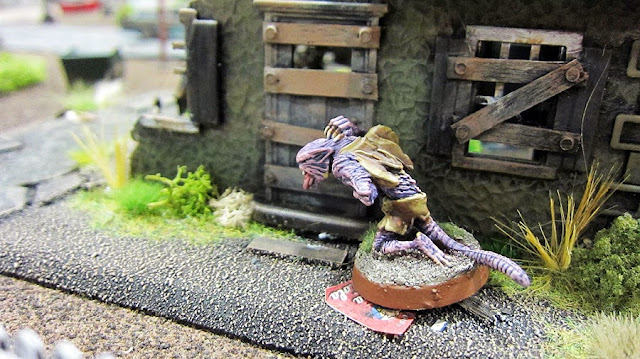 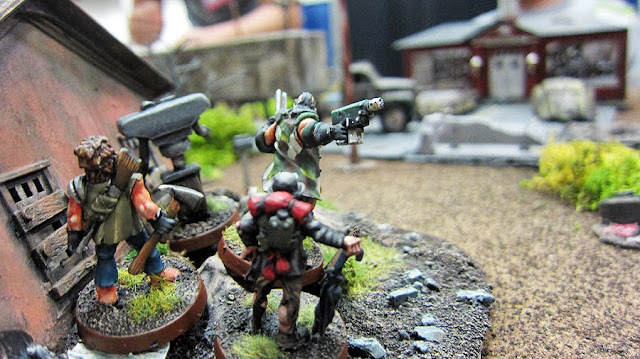 An initial run of good luck in my activation rolls saw my warband in cover near the center of the table, ready to lay down some machine gun fire at the approaching wasteland walkers. Then I discovered some important game rules: 1) There are flamethrowers in this game. 2) They ignore cover. 3) They can light you on fire. 4) If your leader rolls a 1 on his morale check from being lit on fire he runs away.  Only a few rounds into the game and I was pretty much out of the game. Ah well, that's wargaming! 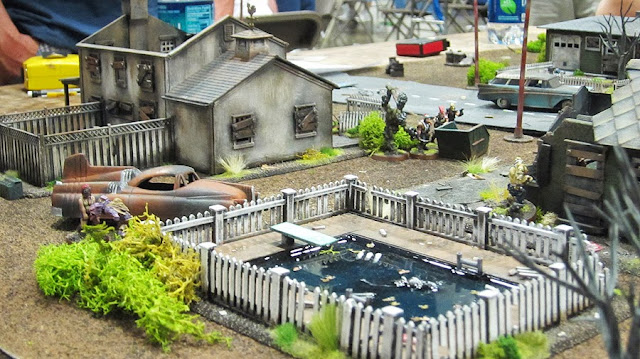 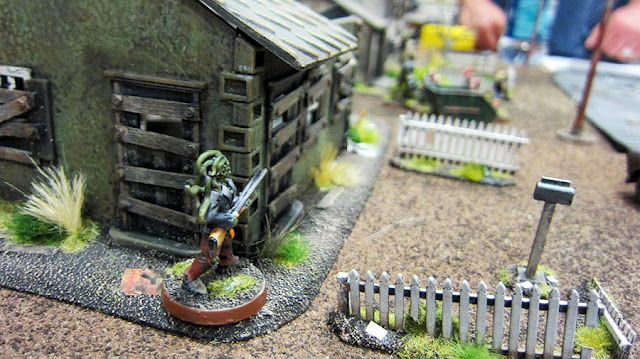 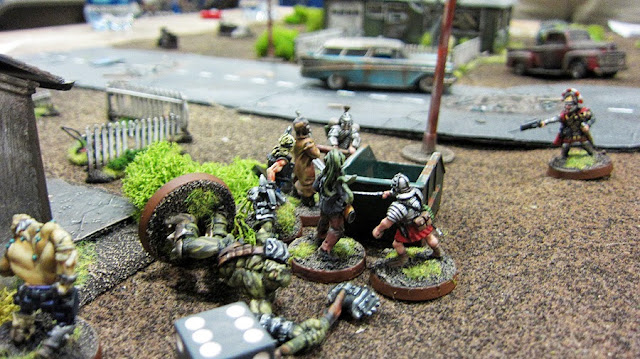 I stuck around to watch Mike get into a ferocious scrap with enemy Legion and talk to Joey, the rules author. Mike really enjoyed the game, and only missed winning by a single victory point. We discussed the rules, and while the mechanics are fairly close to other skirmish games, I know he appreciated the extra crunchiness that Song of Blades and Heroes doesn't have. I really dig the setting and each warband had a lot of flavor, but I'm afraid I can't comment much on the rules (except for the "catching of fire" and "fleeing in terror" aspects!)  This is Not a Test is scheduled for release this Fall, with a possible Kickstarted to get things rolling.

While we were setting up for This is Not a Test, a fellow stopped by and asked if he could take a few pics. Before he did so, he placed a handful of minis in the town. 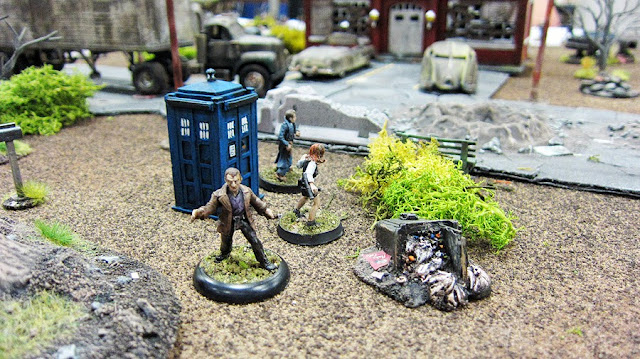 I LOVED THIS. Apparently he had painted up the Doctor, the Tardis and companions and was taking a few snaps as they visited various times and places across Historicon. I asked if he had a blog or was going to share his pictures online but he said he was just doing them for his own enjoyment. Just as quickly as he appeared, he and the blue box were gone. Good bye fellow gamer! I love your idea and hope all of your pics get collected online someday!

With most of my time taken up with rolling dice, I didn't get a chance to see too many other games, but did manage to scope out a few. 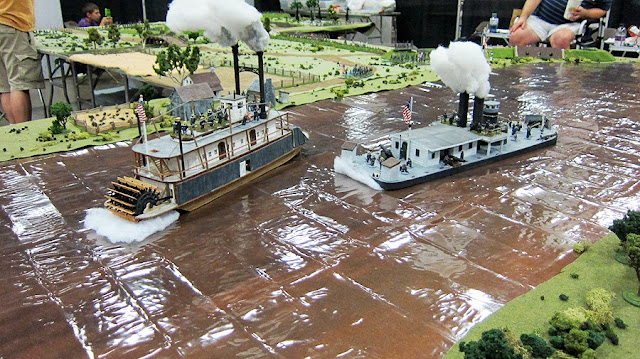 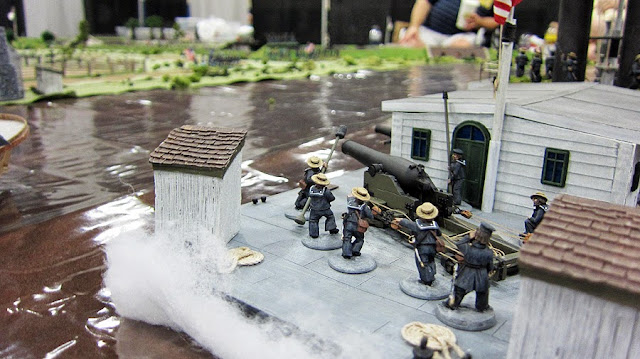 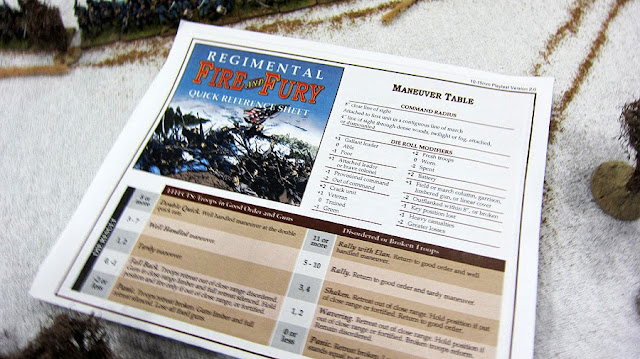 A friend of mine played an Egyptians vs. Hittites game in the same room while I was Dungeon Hacking. He really enjoyed it (apparently his chariots spent most of the game flanking the enemy force, crashing home at the climax of the game at just the right time.) 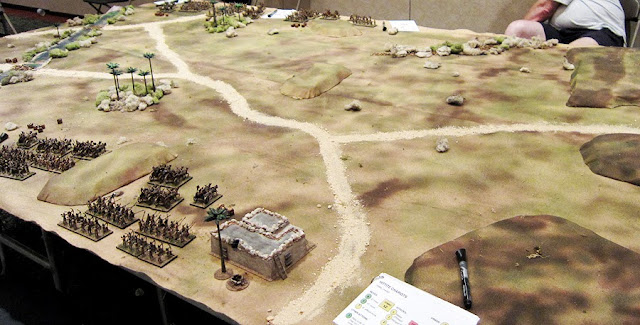 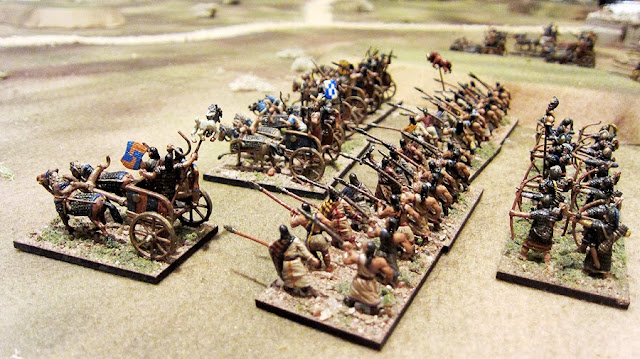 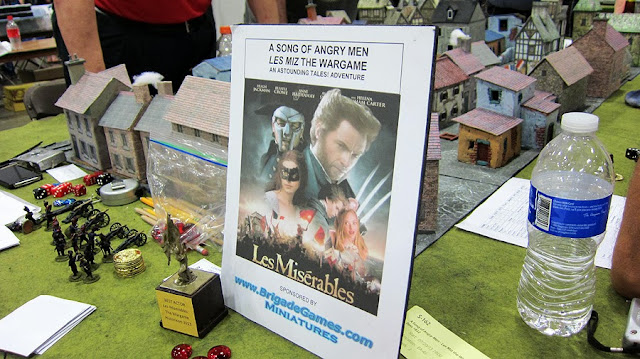 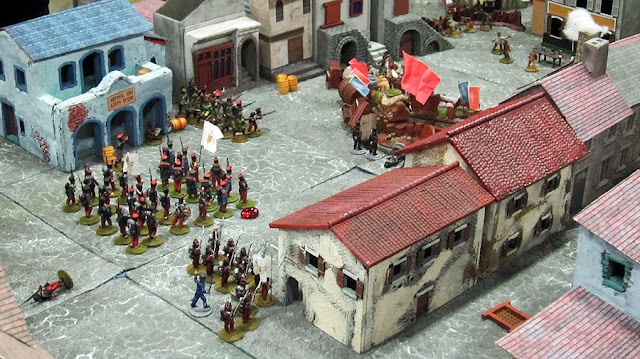 I enjoyed Historicon. I think the noise level was better than last year, and it seemed that there were more games spread out to the smaller, quieter side rooms. There were lots of great looking games (the pirate action on Saturday was awesome, but I was too far away to get good pics), and everyone I played with was friendly and seemed to be having a good time.

I believe the vendor area was a bit lighter this year, but honestly I spent a ton of money stocking up projects and supplies for the coming year. And those dumb little "show specials"? I'm a sucker for those. Vendors, those things work :)

There was still the usual lot of graying and balding gamers attending the show as usual (a club who has accepted my own application), but there seemed to be a much wider variety of folks this year, especially kids. I know there were youngsters under 18 at every game I played, which is encouraging if you are worried about wargaming disappearing in the future. I think Luke from WWPD should get a special credit for running a LEGO game for kids. He had spots for 6, but wound up running it for 16. They were two tables down from our Black Powder game, and were cheering and whooping for the entire time. That was great! I flagged Luke down and asked if he was planning on running it again next year but it didn't sound likely. Whatever he did, I hope someone took notes, because I think it may have been the best intro to wargaming of any of the kid games based on the reactions of his players.

Another great con, and nothing here that would keep me from coming back next year.
Posted by John at 8:14 AM