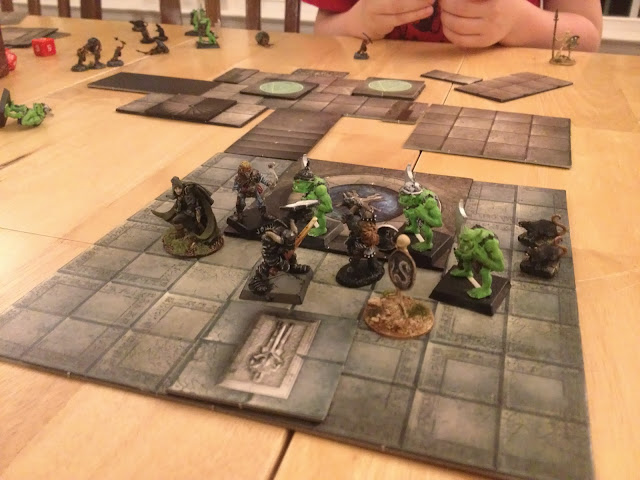 We're finally getting settled into our new home and with our Christmas shopping and parties wrapped up I managed to get some minis on the table. My son and I have messed about with a variety of D&D type games, but no matter how simple I tried to tweak the rules, they always still felt too complicated. I did some on-the-fly game creation this afternoon that stripped them down to the bare minimum and had two hours of fun with the boy today. He was able to internalize the rules quickly and ran a dungeon crawl for me for over an hour. Details on dungeon crawling for kindergartners after the jump.

Statting up the Good Guys

Statting up the Bad Guys

The good guys explore the dungeon laid out by the GM. If they try to listen at a door, climb a wall, disable a trap, etc. the adventurer can roll the d20 with success on an 11 or higher.

When the good guys encounter some baddies a fight might break out.

Adventurers can return to town and heal to max or spend gold to buy equipment, extra warriors, healing potions, etc.

Any time the adventurers encounter monsters, give them XP for the encounter (they can't get XP from the same group of monsters if they encounter them a second time after fleeing for example).

Divide XP among the whole group of adventurers. Reaching their level x100 in XP gains them a new level. Roll the class die again and add the value to the adventurer's Hit Point total.

Here are the monster XP values and some notes I used:

Messing about with dungeon features like traps, teleport circles, funky fountains, etc. should also grant some XP. 5 to 20 seems reasonable.

And that's it! I don't think there's anything ground breaking here, but these worked quite well for the boy and me for an afternoon of orc bashing fun.
Posted by John at 7:07 PM