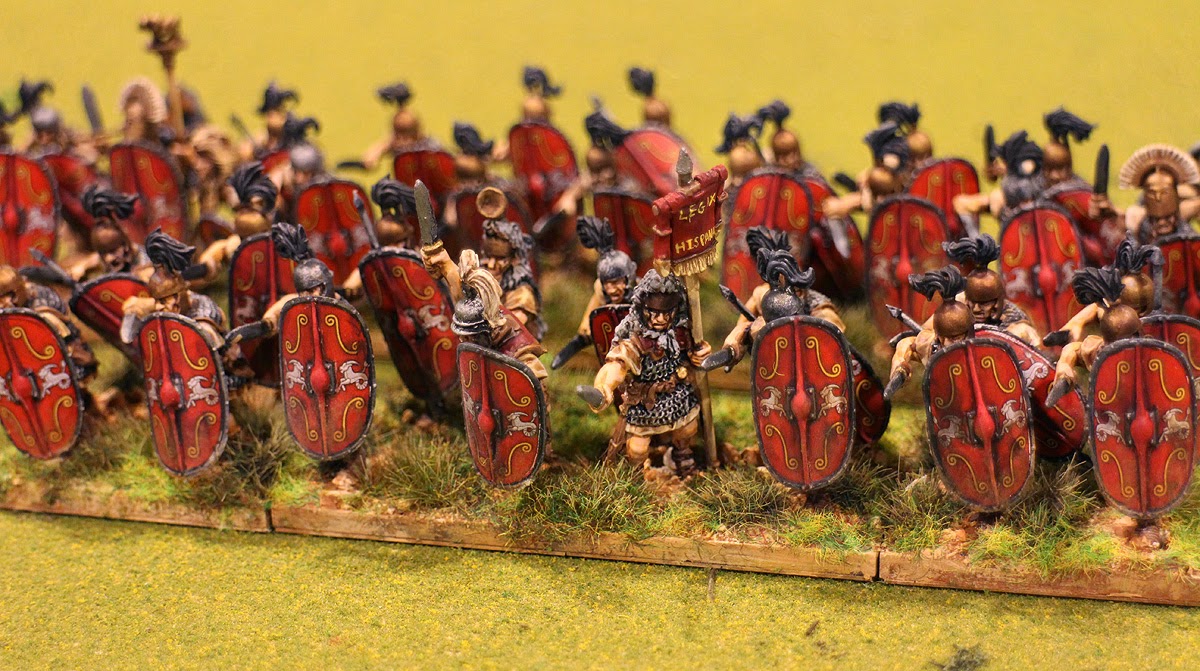 I polished off another 48 figures for my late Republic era Romans, this time using the plastic sculpts from Warlord Games. I started my entry into ancients wargaming with Wargames Factory's release years ago, and now Warlord's latest will be joining them on my table. To see how the two manufacturer's output match up join me after the break.

I was eager to pick up Warlord's figures when they were first released, but it's taken me an agonizingly long time to finally get them painted up. I found Warlord's Celts to be rather "expressive", which I thought fit the chaotic nature of the Gauls, but I wasn't sure a similar style would translate well to these Romans.


My fears were unfounded though, as I quite like the sculpts on these legionnaires. The musculature and gear is all quite detailed and realistic, and the figures go together easily into an "attack ready" pose. Other than the various grimacing faces and swaying horsehair plumes, there's not much variation between the different figures, but for the rank and file of the Roman war machine I think that's ok.

I do wish Warlord provided a few more arm positions. The figures looked most natural to me when the sword arm was positioned to deliver a strike past the shield, but that means figures in the second rank look like their about to stab their buddies in the back ("et tu Brute?"). I'm going to assume they're just getting ready to take their position on the front line momentarily when their comrade rotates to the rear.

I painted up the gladius armed figures, and while I was able to snip off the hilts from the scabbards of about half of the legionnaires, the other half had hilts that were so closely attached to the body that removing them seemed more trouble than it was worth.

That wasn't as much of an issue in Wargames Factory's release, since the box came with both gladius and pila armed troops. Wargames Factory also came with enough command figures to make multiple units from a single box, but for these Warlord figures I had to pick up an extra metal command pack. I use 16 man units as opposed to the 24 man units it seems Warlord intends you to use. Wargames Factory also comes with shield decals in the box, while Warlord requires a separate purchase from LMBS. Here, check out this math:


Yikes! But, that's all worth it once you get them on the table right? I'm not quite sure.

Warlord's sculpting is vastly superior to Wargame Factory's but at nearly three times the price. And while painting seemed to go quicker with the Warlord figires (details were easier to pick out, and deep sculpting sucked up washes, etc.), once on the table I'm not sure the difference is noticeable from three feet away.


In my opinion the tight ranks and the overlapping shields obscure a lot of the differences in details. I enjoyed painting up the Warlord figures, and intend to pick up a pair of their pila armed boxes, but I still think there's room for Wargame Factory's earlier release, especially for gamers who need to build up armies quickly and cheaply. Happily, we're spoiled with these kinds of choices at the moment. Not only do we have our pick of various metal figures to consider,  we even have two different plastic kits to choose between.

With nine Roman units under my belt, I'm closing in on my goal of a 12 unit Roman army commanded by Caesar. I bounce around from project to project, so finally "finishing" an army is a heady prospect for me. I'm not quite sure what to pick up next: Roman cavalry? Ballista? German or Numidian auxiliaries? I could use some suggestions!