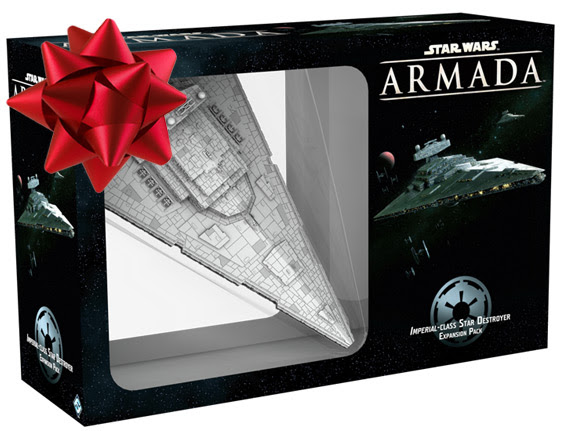 It's time for the annual round up of holiday sales starting on Black Friday. Tons of board games, war games, miniatures, and hobby tools for the discerning die-roller in your house. Plus, there's a new Star Wars movie coming out in a month, which means there's a bulk freighter's worth of associated game and hobby gifts that will likely bleed over into the wish list of your tabletop gaming geek. Let's get started after the jump!

Architects of War: Deep discounts on a number of lines, including 30% off Gripping Beast, Perry Plastics and All Quite on the Martian Front, and 40% off Perry Metals and AoW Terrain.

The War Store: The Black Friday sale is live! Between 6% and 10% off your total order (based on size), plus many deep discounts on popular lines (Privateer, Warlord, Battlefront, more!) AND FREE STUFF! Magazines, miniatures, paints, lots of stuff. Check it out!

Horus Heresy: Betrayal at Calth: Whoah, slick! I've been out of the 40K scene since Rogue Trader days, but this new Horus Heresy era boxed set looks right up my alley.

Newline Designs: 25% off all ranges including 20mm ACW and Ancients and 28mm Arthurians.

Fantasy Flight: Good discounts on many of Fantasy Flight game lines including Dust figures if you need to flesh out any sci-fi or post apocalyptic warbands.

Warlord Games: 20% off tanks and vehicles when you buy three or more. Buy the D-Day Bolt Action intro set, get a free tank! 50% off plastic sprues! Plus secret deals littered across the site (follow Warlord on social media for clues on where to find them)

North Star: Looking for a stocking stuffer? North Star offers a mystery bag of 20 figures for £15.00. Their also running a pre order special for the new Osprey rules Honours of War that includes a free figure, and a bundle deal for intro armies as well. Lots of great figures there, hoping to see some holiday specific offers soon!

Black Tree Designs: Until Sunday, 20% off Doctor Who, 40% off all other infantry!

Plastic Soldier Company: 25% off PSC products (15% off Army boxes) until Sunday at midnight.

Splintered Light: I really dig their 15mm fantasy figures. 25% off until the 29th!

Black Army: 20% off until December 31 with code HOLIDAYS

Armorcast: Need terrain? Spend $20, use code BlackFri and get 20% off.

You can't go wrong with a set of new paints, fresh clippers and blades, or basing material. Nobody pines over them, but you can't make a dent in your lead mountain without 'em.

Litko: 20% off everything through Monday.

Releasing on December 22, this fantasy expansion of the popular Lion Rampant rules debuts just before Christmas. That's a tight deadline, but there's a decent chance it arrives in time if you sign up for Amazon Prime. Try Amazon Prime 30-Day Free Trial

Frostgrave: The current hotness in fantasy gaming. Build a warband of tomb robbers, necromancers, and malcontents and battle over snow shrouded ruins for treasure and glory. Besides the core rules, the new expansion Thaw of the Lich Lord is now available. Don't forget to pick up some of their  great medieval style miniatures (kitbash with other plastics for a unique look) and new plastic cultists.

Two Fat Lardies: 20% off Through the Mud and the Blood until Dec 1st.

Crossfire: My first set of wargame rules, and finally back in print! Great little game, recommended.

This is Not a Test: No sign of a holiday sale, but I've played this at Historicon and saw numerous games with folks having lots of fun rolling dice with it.

Board and Table Top Games

Fury of Dracula: Back in print, I've heard nothing but good things about the previous editions. We're a bit past Halloween, but I think you could sneak this under the tree as one of the traditional "scary ghost stories" that appear in at least one Christmas carol.

Pathfinder Living Card Game: My family has been playing this for many months, picking up expansions as we complete them. I know some reviews have dinged it for being repetitive, but since we only play a session every few weeks we haven't gotten bored with it, and not having to relearn rules each time has been nice. Great art, interesting decisions each turn, it's quite a bit of fun.

Pandemic: We also dig Pandemic, and have been playing through the On the Brink expansion. It's a nice break from blowing stuff up to saving the world through science.

Sushi Go: A great "chuck in a bag" game, our family brings this on trips and to restaurants to keep our boy entertained. It's a lot of fun for everyone as you collect sets of sushi cards from an ever diminishing collective pool trying to maximize your score over the course of several rounds. A great little game that's quick to play between heavier ones or to bring when traveling.

Most of my gaming the past few months has been with Star Wars Armada and Imperial Assault. With the new movie coming out, a seven year old son who is into Rebels and the original trilogy, we've got Star Wars on the brain in our house. Luckily, there's plenty to scratch that 'Galactic Itch' this season.

Armada
I love Star Wars Armada. Wave 2 just released, and while I've already scored an MC80 Cruiser, I'm eager to get my hands on some MC30s, The Rogues and Villains squadrons and even a dreaded Imperial Star Destroyer.

There's quite a few deals for Armada. Miniature Market has all Wave 1 ships on sale ($5 for more dice? Imperial fighters for $10? Nebulons and Corvettes for $10?! Heck yeah!).

X-Wing and Imperial Assault
Miniature Market also has X-wing on sale too (New core set for $18 wow!) as well as Imperial Assault (I have dreams of creating a 30 man platoon of Imperial Assault stormtroopers, which might be feasible now that the pack is down to $9.99!).

Battlefront
Need to take a break from rolling dice and painting teeny tiny lead soldiers? I've been playing Battlefront for the last week, and it's great for blowing off steam, perfectly captures the Star Wars aesthetic and is totally fun even when you're losing.

Sculpting a Galaxy: I've always been fascinated by the special effects created by ILM for the trilogy. I'm eager to get my hands on this behind the scenes history of the various models and creatures designed for Star Wars.

Bandai Star Wars Models: There's a pretty big crossover between the wargame hobby and model building (especially now that so many multi-part plastic wargame kits are being produced). I've had my eye on several of the Bandai model kits recently, and while it feels weird to build a model just to sit on a shelf, I think many of them (such as the AT-ST) could double as table top game pieces.


So that's some of the stuff I've dug up for this year. Let me know if you've heard of any sales I've missed, and let me know what YOU are hoping to find wrapped up with a bow this year in the comments below!