Looking over my blog I see I haven't been posting very much, which is odd because I've been playing a ton of miniature games over the last few months. Most of my games have been of Star Wars Armada. Check out a report on my most recent game after the jump.


My usual opponent and I have recently gotten our hands on a few ships from Wave 2 which just released last week. We're still getting a handle on the ins-and-outs of the first Large sized ships added to the game, a fact that will become readily apparent in the battle below!

The dastardly Galactic Empire's Star Destroyers (an Imperial class commanded by Admiral Screed, and a supporting Victory) were conducting close maneuvers near the edge of the edge of operations. 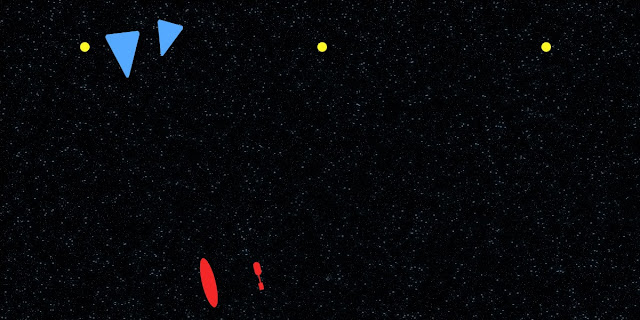 The rebel taskforce (a mighty Calamari MC80 commanded by General Dodonna and a Nebulon-B Escort Frigate) jumped out of hyperspace on a direct course towards the Imperials. A third ship (an Assault Frigate MkII) was plotted to arrive from hyperspace to assault the rear of the Empire's deadly starships.


Both sides launched support fighters, the rebels relying on their trusty X-wings, B-wings and Y-wings while the Empire employed a band of mercenaries in Firespray gunships lead by Darth Vader himself.

As the rebel commander I was startled by the sudden speed of the Imperial Star Destroyer. I was accustomed to dealing with lumbering, under powered Victory Star Destroyers. Luckily, my MC-80 was crewed by a Nav Team lead by Captain Ray Antilles, who gunned the port thrusters and executed a nearly 90-degree turn to bring their broadsides to bear.

The following round the MC-80 angled back towards the Imperials, while the Nebulon-B frigate Yavaris gave the B-Wing fighter wing the order to assault the Imperial Star Destroyer. The focused fire of the rebels inflicted crippling fire on Admiral Screed's flagship. 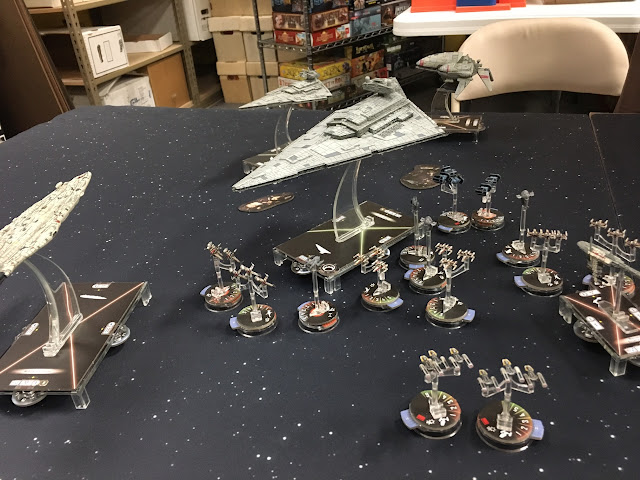 The rest of the opposing starfighters engaged in a furious dogfight, the concentrated fire of Red Squadron sending the rash Lord Vader spiraling out into the cosmos.

With the Imperial ships clearing the previously plotted hyperspace buoys, the rebel Assault Frigate jumped into position behind the Imperial lines. 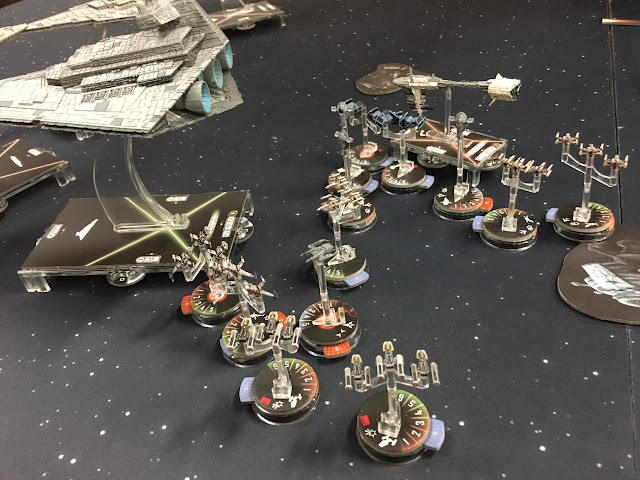 As the rebel and Imperial lines intermingled, the rebel warships converged on the Imperial flagship, dealing heavy damage to it. The rebel starfighters were not faring as well, the crafty bounty hunter IG-88 assassinating rebel squad leaders left and right. 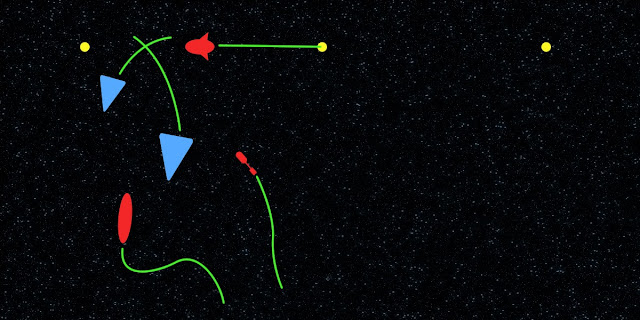 General Dodonna gripped the armrests of his command chair. "Helm! Aim for the space between those Star Destroyers! The path is only 200 meters wide!"

"Sir! That flight path is impossible, even for a computer!"

Dodonna leapt from his command chair, pushed the navigator aside and shoved the throttle to flank speed. Laughing manically he jammed the fire control button repeatedly. Rebel crew members edged towards the escape pods. 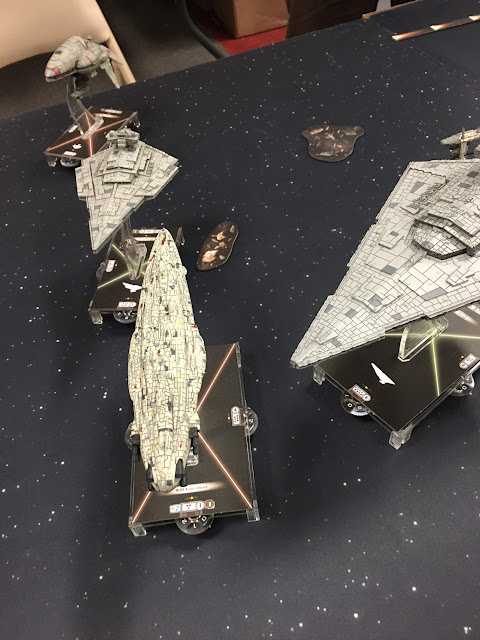 Seeing an opportunity, Admiral Screed pored fire upon the enemy Calamari flagship. Her shields disintegrated under the fusillade and explosions raced along her starboard side, but she held on. General Dodonna ordered a counter attack and under bombardment from the rebel warships the Imperial Star Destroyer suffered numerous critical system failures. Strained to the breaking point, the great vessel's reactor exploded, tearing the Star Destroyer apart.

Next Verse, Same as the First 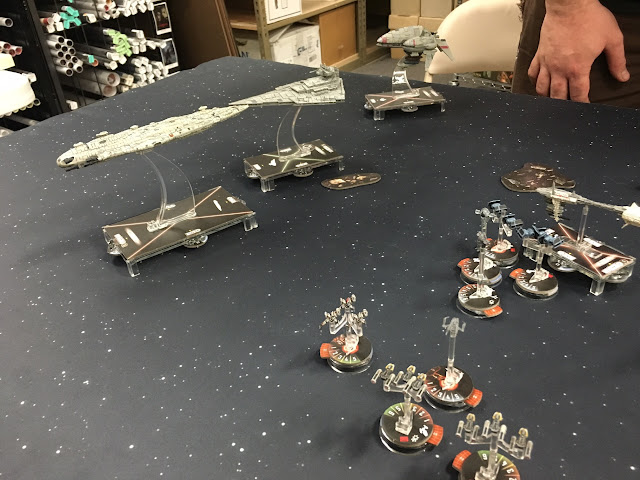 If there's one thing General Dodonna loves, it's explosions. Eyes wide and quivering, spittle flecking his lips he shouted "Ramming shpeeed!" and hurled the rebel flagship towards the remaining Victory Star Destroyer. The two vessels crumpled against each other, delivering heavy laser fire at point blank range. Already mortally wounded from the battle with the Imperial flagship, the MC-80 broke apart and disintegrated in a shower of escape pods.

Snatching Defeat from the Jaws of Victory


The  Victory Star Destroyer swung away from it's pursuers, seeking a safe hyperspace escape route.

Sighing heavily, the captain of the Yavaris surveyed the wreckage of the battle. The rebel starfighters had suffered crippling damage and the shields on Yavaris were down from repeated harassing fire from the defeated Star Destroyer. With the result still in balance, this attack would only prove useful if the rebels could finish the Imperial warship. 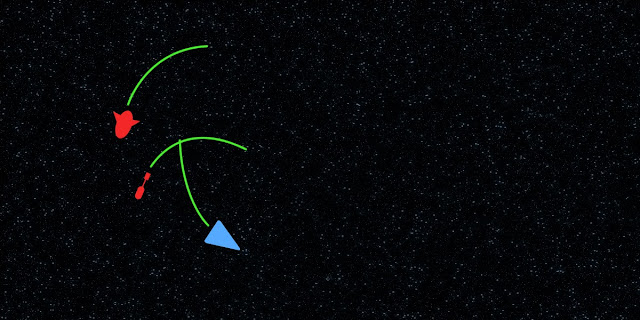 The Nebulon-B fell into line behind remaining enemy warship, each side delivering long range blasts to each other. The chief officer approached the capatain of the Yavaris.

"Sir, several enemy fighters have broken off from the main group. We've analyzed their attack and there is a danger. Should I have your ship standing by?"

"Evacuate? In our moment of triumph? We still have two hull points left and plenty of brace defense tokens. They only have a single fighter capable of attacking us! I think you overestimate their chances. Full speed ahead. Let's see if we can't catch them with one more attack."

The rebels caught the Victory destroyer with a few turbolaser blasts from long range, but to little effect. The Imperial warship seemed to momentarily stretch towards infinity and then snapped out of sight, making the hyperspace jump to safety. The captain of the Yavaris grimaced at his quarry's escape.

"Ah well, I think we came out ahead and can chalk this up to a rebel victory."

"Sir, there's still an imperial starfighter lingering off our port bow. Bomber class. It's powering up it's weapons."

"Hmm? Oh, well begin calculating the jump to lightspeed. We should be able to withstand their attack. I think we'll be able to return to base before his torpedoes deals any mortal damage. I mean he'd have to roll a..." 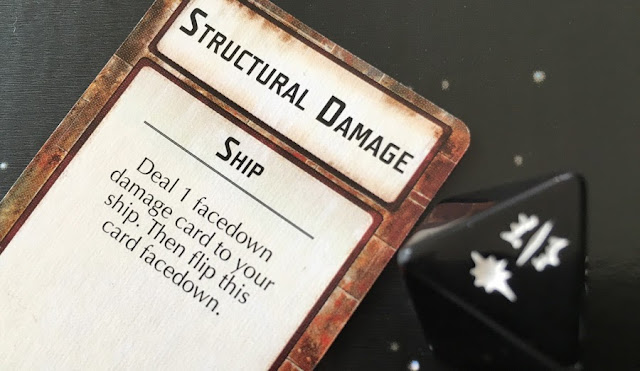 I really dig Armada. Many of our games come down to a single die roll at the end of the match, but it's always easy to see how previous decisions in the game lead to the point where victory was so razor thin. Ships, cards, and upgrades seem really well balanced, and it's hard to make a "perfect list". There's always tough decisions to make; during army list creation, deployment, and every turn. Plus, all the ships come prepainted. Along with a few starfield mats, every game is a good looking affair. Recommended!