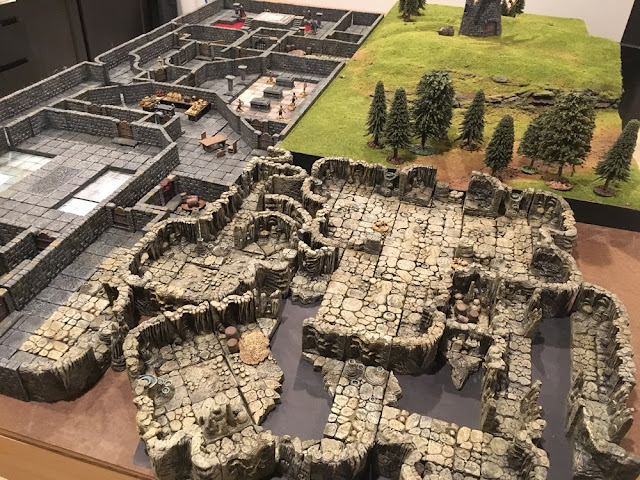 Each New Year's Eve my friends and I get together to do some 'crawlin', but we've given up on the pubs and switched to dungeons. Check out our subterranean adventures after the jump as the heroes race to defeat the deadly Vampire Lord before the ball drops at midnight!
I use a set of rules I designed for single night dungeon crawls. Each player gets a hero, delves into a series of monster and boss battles, collects loot and levels up from a lowly Adventurer to an Epic Bad Ass over the course of a few hours.

Each of my six players selected a character and dismounted their pack ponies within the wind swept moors near the lair of a ghastly Vampire Lord and his army of minions. 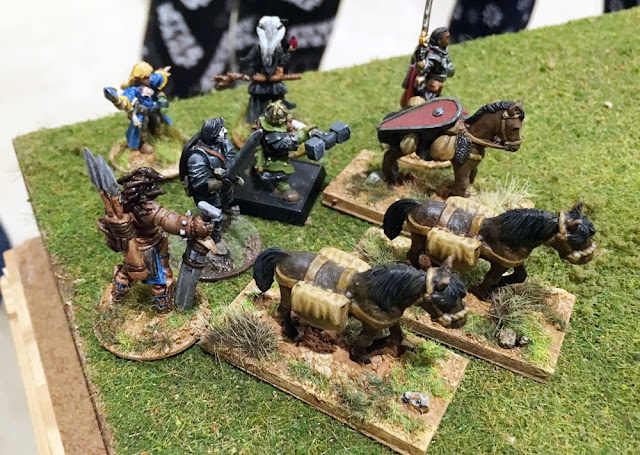 Spying a bandit lookout near the crest of a hill, the adventurers cauthiously appro... actually they just charged forward, met by the lookout's bandit and berserker allies. 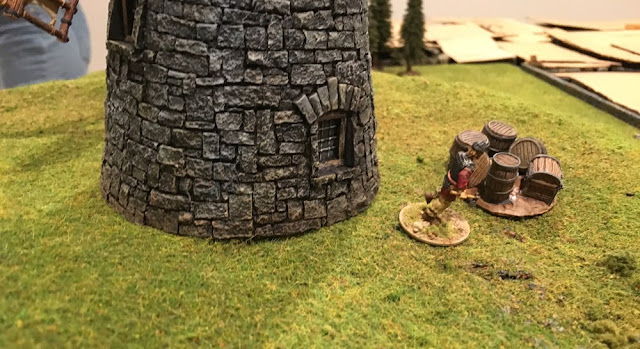 Putting the ruffians to the sword, the party surveyed their options. A copse of woods to the north might obscure a passage to the vampire's dungeon, but the group decided to descend into the obvious entrance to the east. 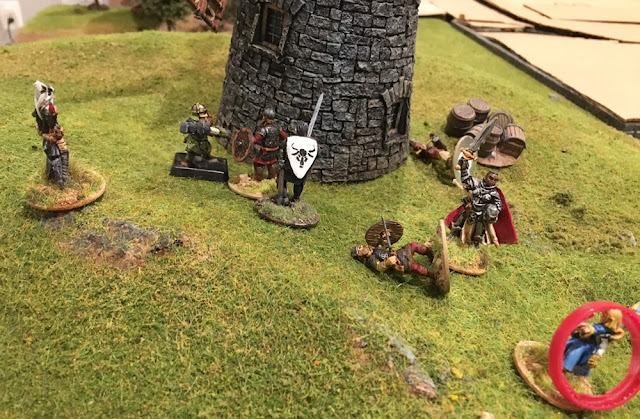 A pair of ogres and berserkers guarded the cavern entrance, likely paid well by the vampire, but no gold could be worth the epic beating they suffered at the adventurer's hands. 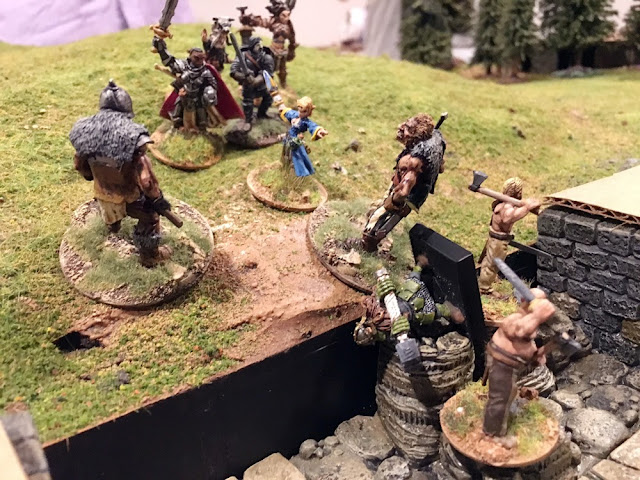 Search the cave the party gathered the ogre's loot and discovered a secret door hiding a hidden cache of enchanted gear. 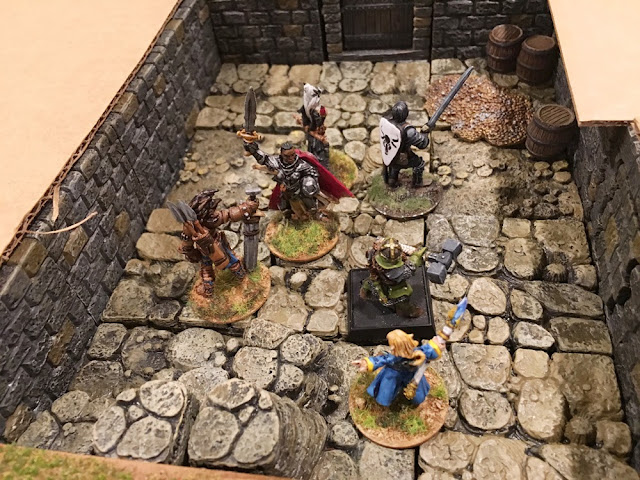 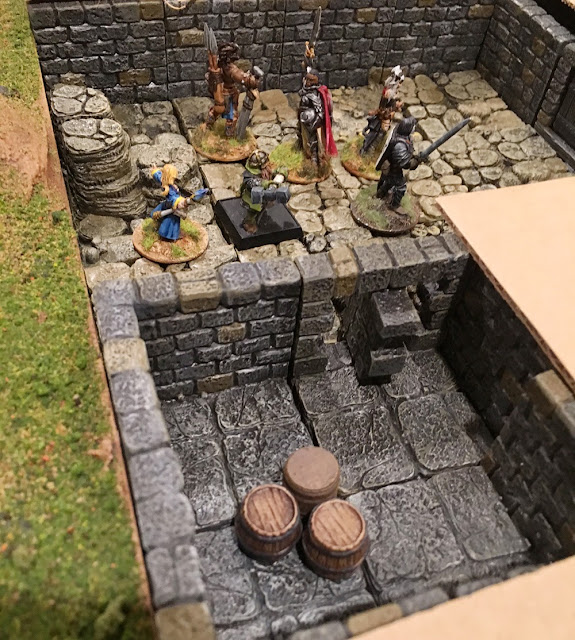 Risen from the Grave

Kicking in the door, the party entered the dimly lit dungeon proper. Suddenly ambushed by dozens of skeletons, the undead creatures nearly overwhelmed the heroes, dropping several of them and reducing the rest to a knife's edge of survival. 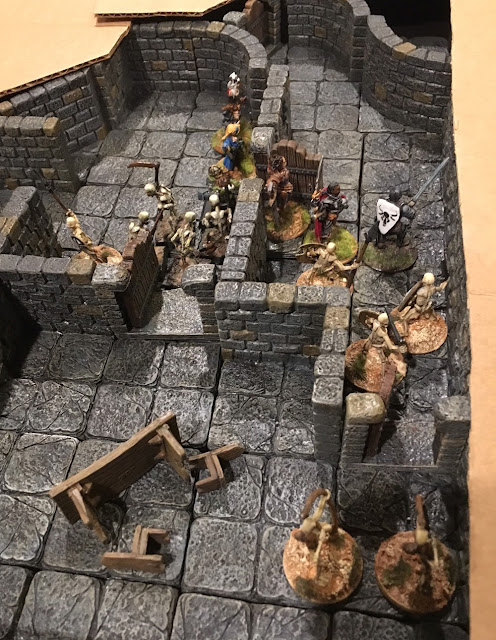 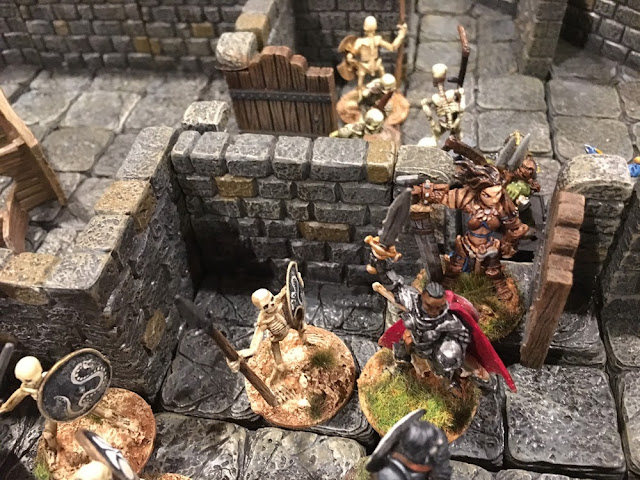 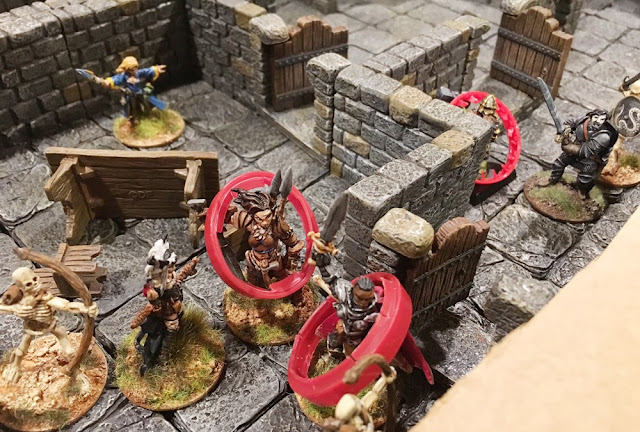 Binding their wounds and probing further into the dungeon the group discovered a vile tomb. Readying sword and spell they entered to do battle with the animated corpses shuffling about in the darkness and were surprised when more zombies erupted from the sarcophagi inside. 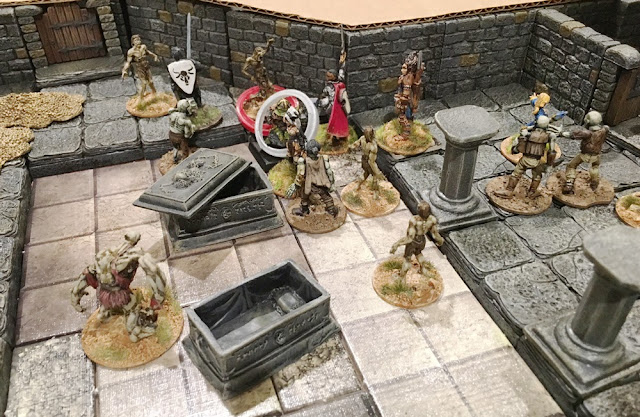 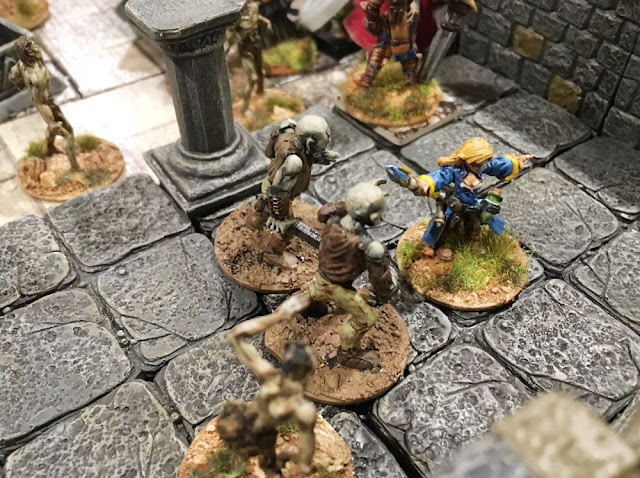 One particular enormous ghoul emerged and began hurling the stone sarcophagi at the group before wading into battle. 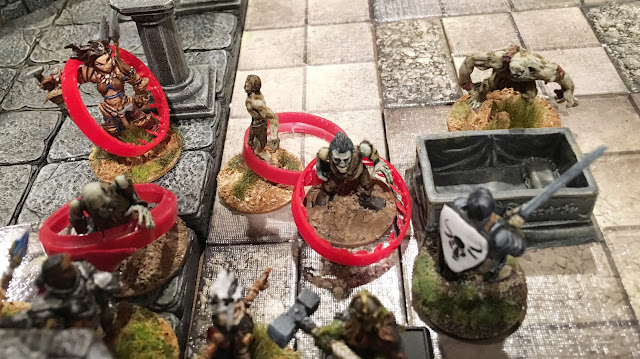 With the last unquiet dead laid to rest, the party distributed the creature's enchanted treasures amongst the heroes and kicked in the next door, surprising a gnoll sorcerer and his beastmen guards. With a bellow one of the goat headed creatures charged and scattered the adventurers with a head butt while the gnoll howled a dark spell summoning a poisonous Stinking Cloud. 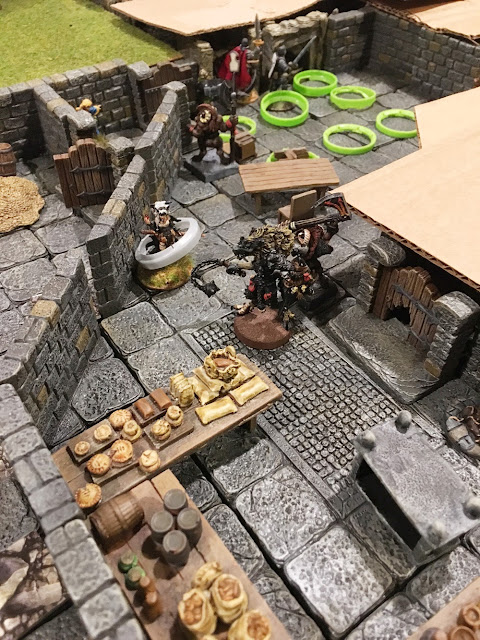 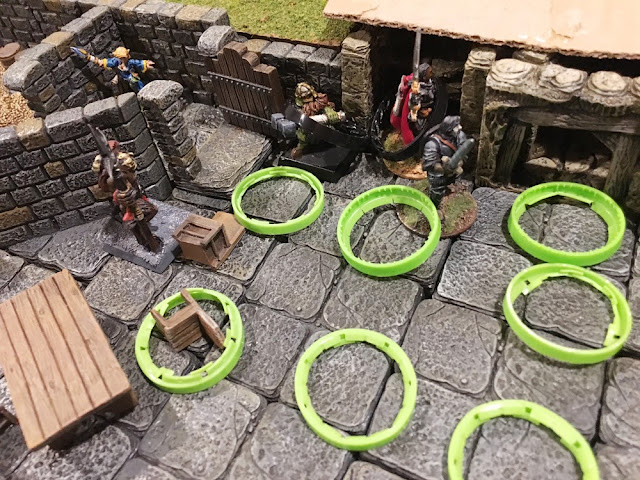 The heroic barbarian darted to the far side of the chamber to hold a narrow passage as a trio of beastmen reinforcements poured forth. 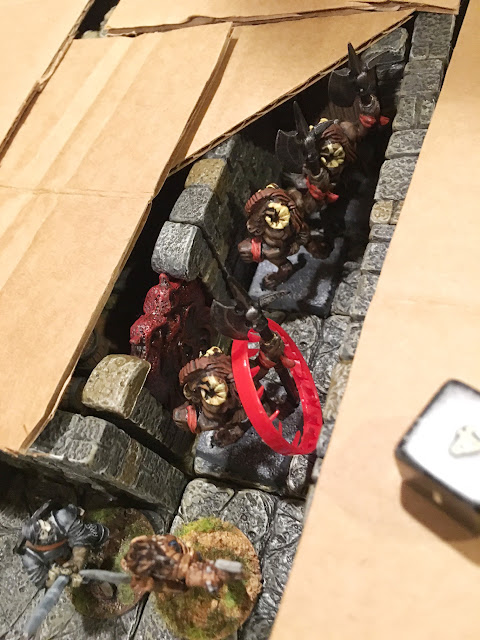 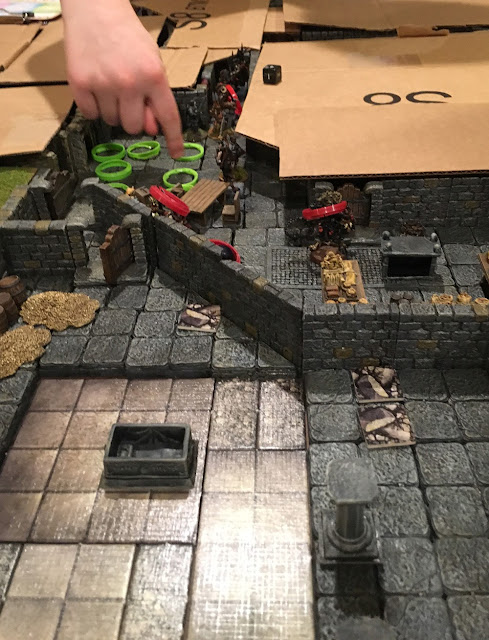 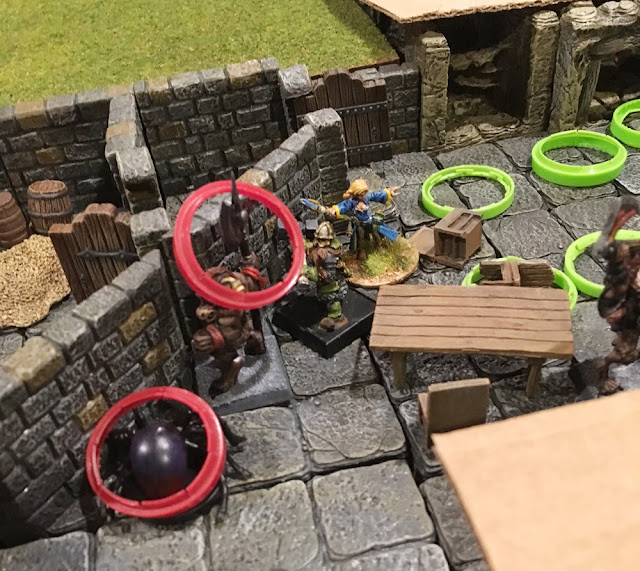 After a desperate battle the hairy monsters were finally laid to rest and the party paused to catch their breath.

Each battle had been a near run thing, with the heroes barely triumphing. A shiver of fear ran down their collective spines when the druid spoke with some common dungeon rats and discovered the next chamber held a great and terrible evil.

Bravely forging on they steeled themselves to do battle with a pair of Ice Devil sentries guarding an enchanted door. 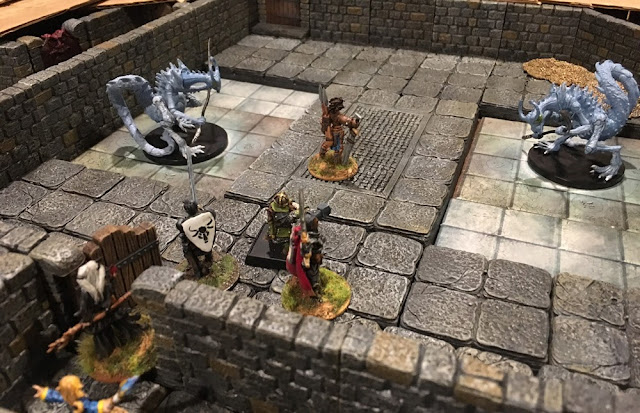 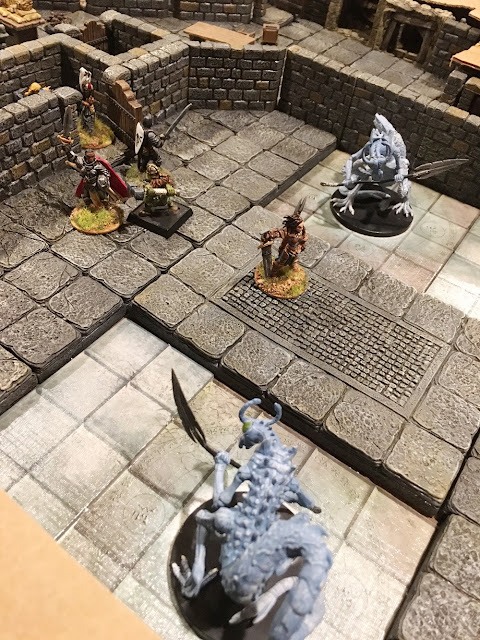 Despite posing a deadly threat, luck was on the party's side and the pair dropped quickly, the easiest battle so far!

The Lake of Blood

Passing the enchanted door, the heroes traveled a long and dark tunnel, dread growing with each step. After opening the final iron shod door they revealed the final chamber, the temple of the Vampire Lord, his Nosferatu minions drinking from a great pool of blood. 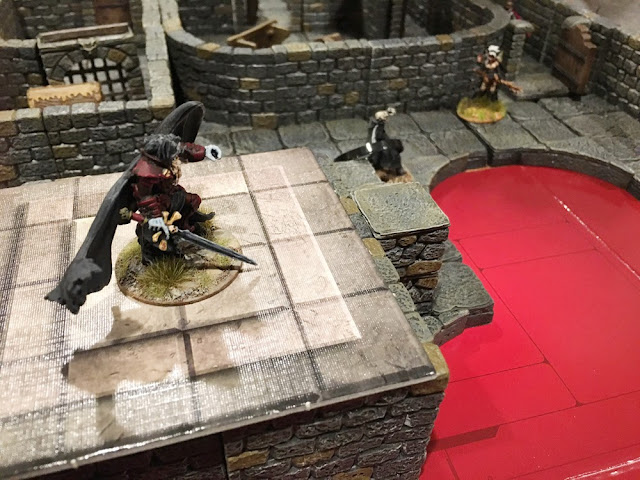 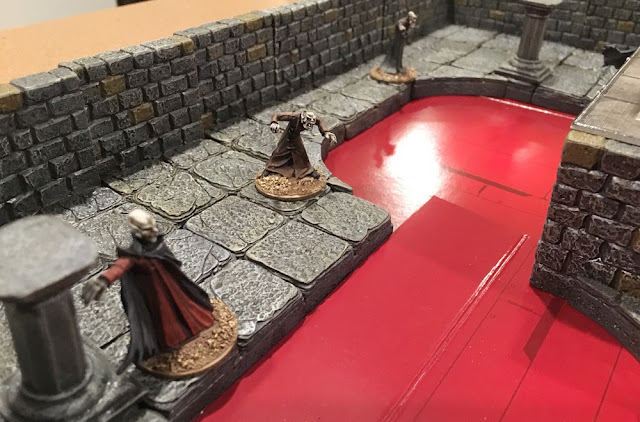 The party charged forward, focusing on the lesser vampires who regurgitated the blood they'd engorged themselves on into animated Blood Demons. The Vampire Lord himself stayed at a distance, flying about and attempting to use his charming gaze to dominate the heroes. 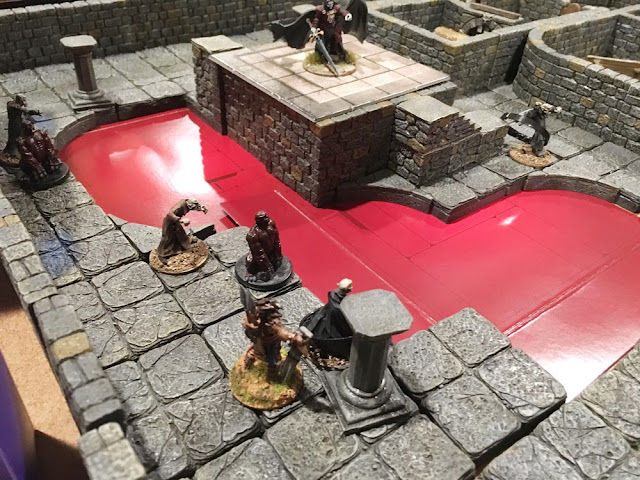 After numerous failed rolls, the Vampire abandoned his mental attacks and got stuck in, raking the heroes with his claws. 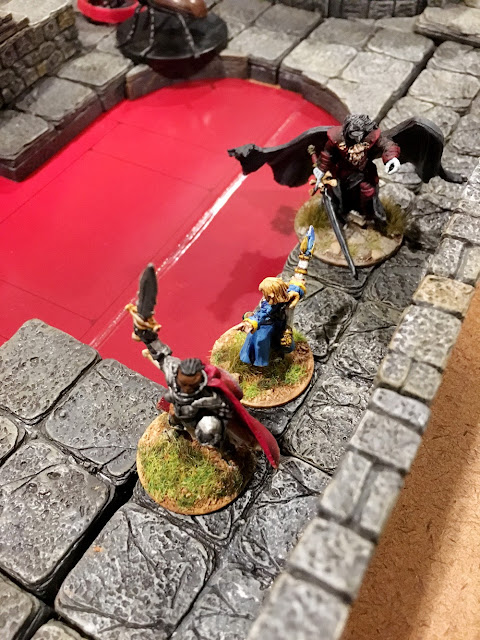 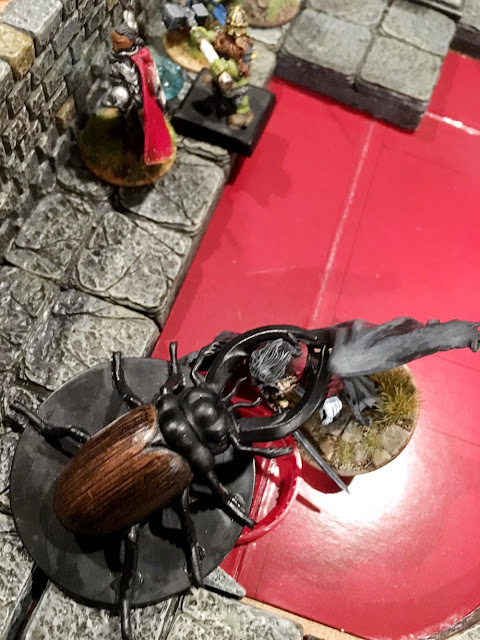 His minions defeated, he was overwhelmed by the remaining heroes, finally crushed between the jaws of the druid's Giant Beetle form and hurled into the pool of blood.

Victorious! And just in time for the ball to drop on New Year's Eve. But as they left to celebrate, the heroes failed to notice the bubbles forming on the surface of the lake of blood. Would the creature return to bedevil them again? Guess we'll find out next year!
Posted by John at 1:41 PM