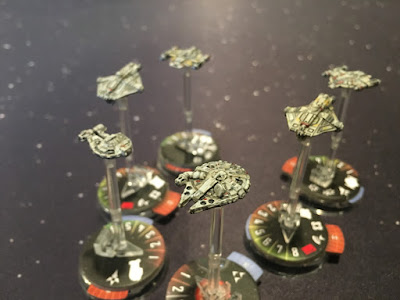 The space battle in the recent Rogue One flick has inflamed my enthusiasm for Star Wars Armada, and reminded me that I have some tiny spaceships that still need to be painted up. I love Fantasy Flight's game pitting Evil Imperial Space Triangles against the noble Fish People Pickles, but the vessels come already painted save for the miniscule starfighters. Still getting the colors and markings on such tiny subjects is a different sort of challenge which is pretty fun. 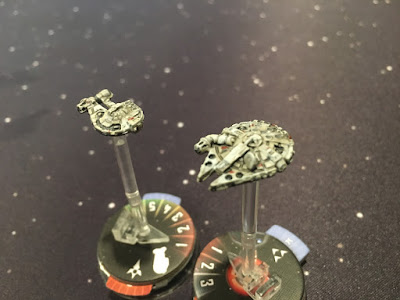 Han Solo's Millenium Falcon will be recognizable to even casual fans of the Star Wars movies, but the other bugger in the picture is the off-brand knockoff Outrider, created for a story set between "The Empire Strikes Back" and "Return of the Jedi"

Just as obscure are the freighters and patrol craft from the animated "Rebels" series. They may not look like much, but the hexagonal ships are able to manipulate the various objective points (sensor buoys, targeting beacons, etc.) within the game while the disc-like vessels are fearsome interceptor bombers. 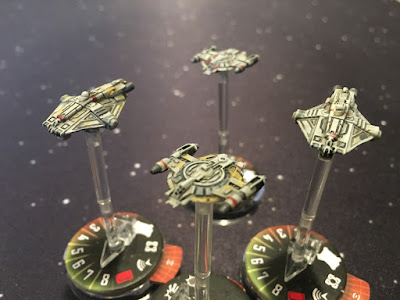 These were quick paints, and being flying garbage scows they hide mistakes easily. I'm sure these are worth only a pittance in points, but  I was happy to get them painted up in preparation for our upcoming Corellian Campaign Armada battles.