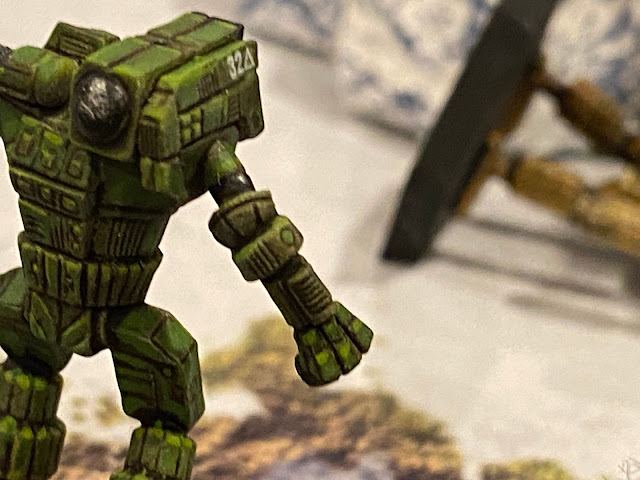 Their objective was the capture of Battlemech-X, a mech of unknown origin the Lyrans had been testing on the icy world. The battlemech was being housed within a factory complex, the outer ring of sensor stations and pickets that protected it had been methodically smashed over the last several months by Razor's Raiders

The upcoming mission would destroy defenses around the factory housing Battlmech-X and provide cover for a team of House Kurita commandos to infiltrate the factory and take control of the battlemech.

Once the Raiders assaulted the factory and claimed the Lyran's prize, any pretense that Razor's Raiders were simple pirates would be blown. The mercenary company, including all support personnel, the Kurita commando team and Battlemech-X would need to escape aboard the dropship belonging to the allied mercenary company Wu's Woeful Witches. Their escape dropship had already been burning towards Parakoila for several days. The precision execution of the operation would be critical, as no time could be spared for repair or rearmament following the battle. In addition, earlier recon missions had determined the factory complex was guarded by several heavy and assault class battlemechs, with others able to be called in as reinforcements from nearby bases. This would be a challenging op. 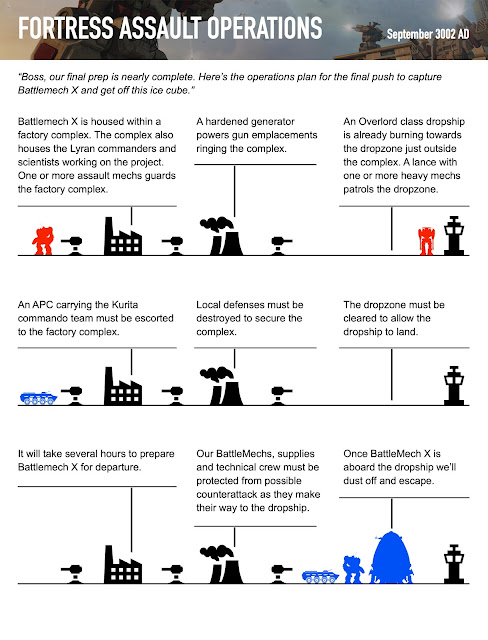 The assault would be broken into two theaters. Two lances would assault the factory proper and escort the commando team to the mech hangar housing Battlemech-X. 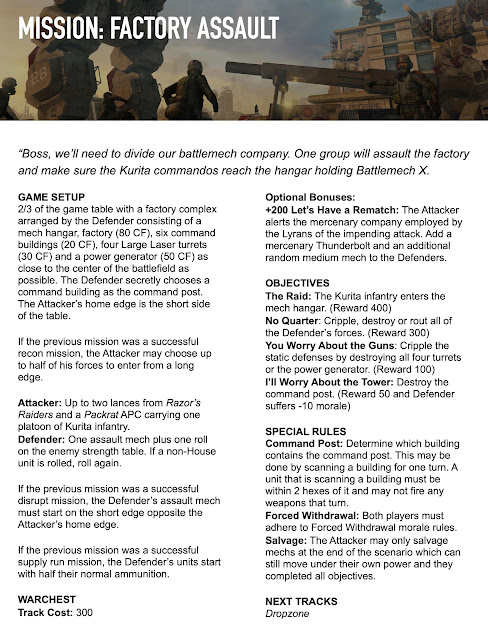 A third reinforced lance would attack the landing pad, clearing it of defenses and securing a dropzone for the approaching dropship. 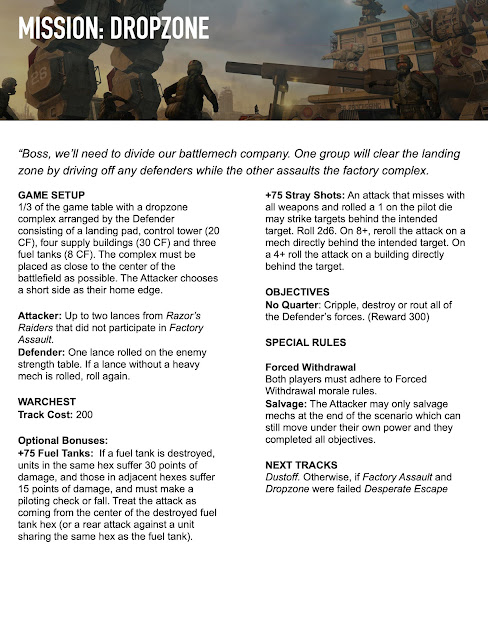 With nerves on edge, the march to the theater of operations was quiet. Tense. As Captain Razor's command lance and the company recon lance drew within visual range of the factory complex, sensor data began flowing from the light scout mechs as they began a visual scan of the industrial zone.

The complex was defended by a pair of heavy laser turrets powered by a reinforced generator. As the enemy mech sensors picked up pings from hostile approaching forces they fell into defensive positions.

A Lyran Rifleman picked a location to the west of the complex, a Hunchback sporting a devastating short range AC20 sidling up to it as a bodyguard. 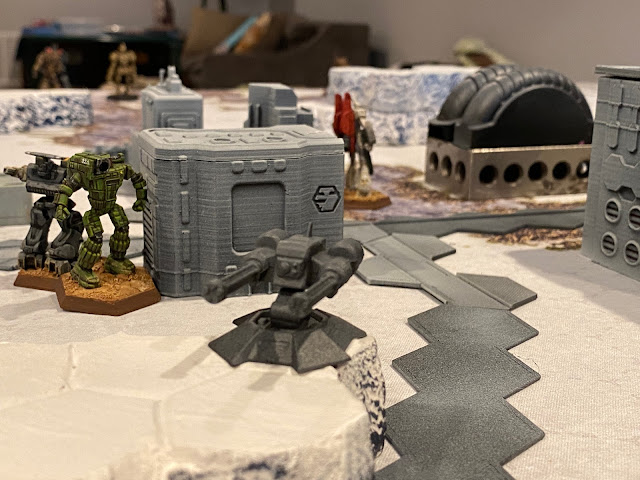 A Thunderbolt squated in the lee of the primary mech hangar, relying on the lance Phoenix Hawk to act as its eyes. 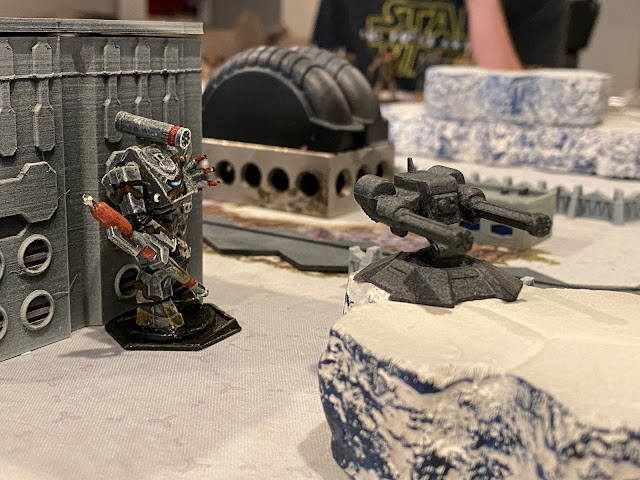 The bulk of the Raiders deployed en masse to the northeast. 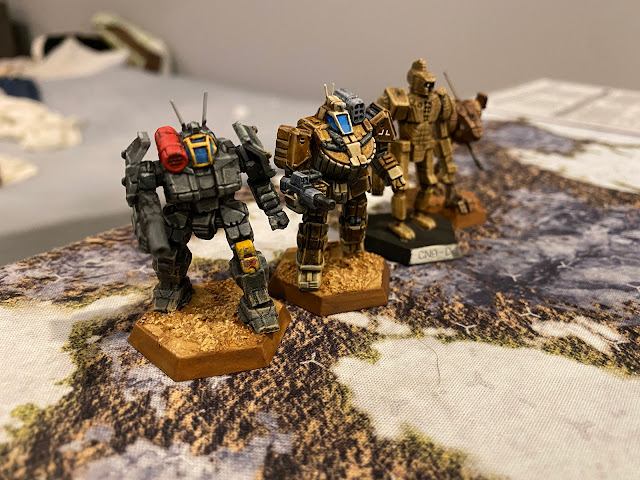 Sgt. Maple in her Phoenix Hawk escorted the inexperienced mechwarrior "Lizard" in his captured Rifleman into a commanding position behind a ridge to the northwest. 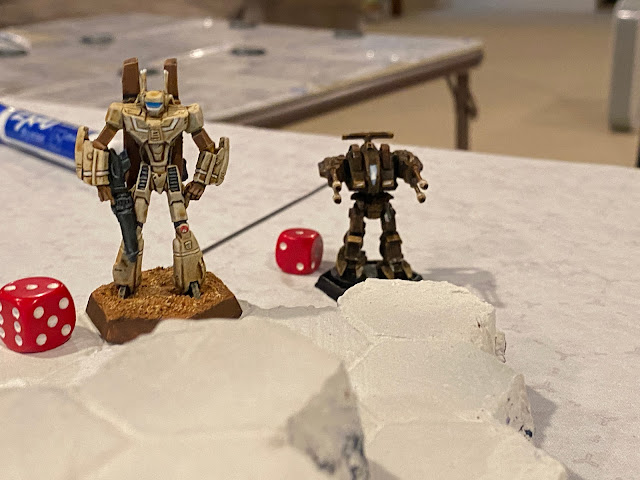 The two long range mechs began an autocannon duel as their comrades maneuvered into position. 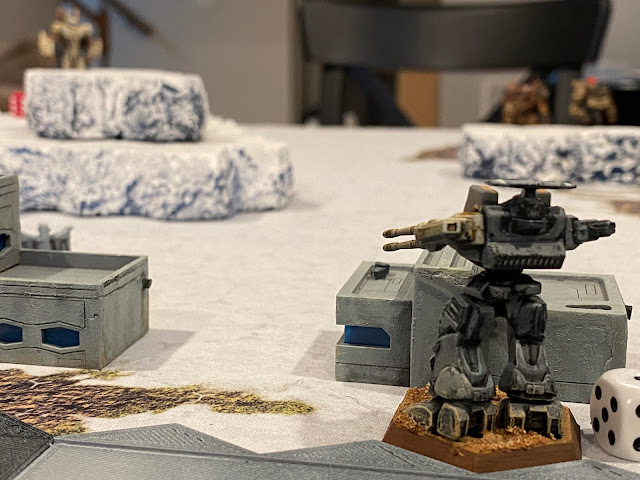 As the attack element skirted the battlefield to the east, Sgt. Cooler twiddled the knobs on her sensor readout as a new seismic trace resolved itself on the display. 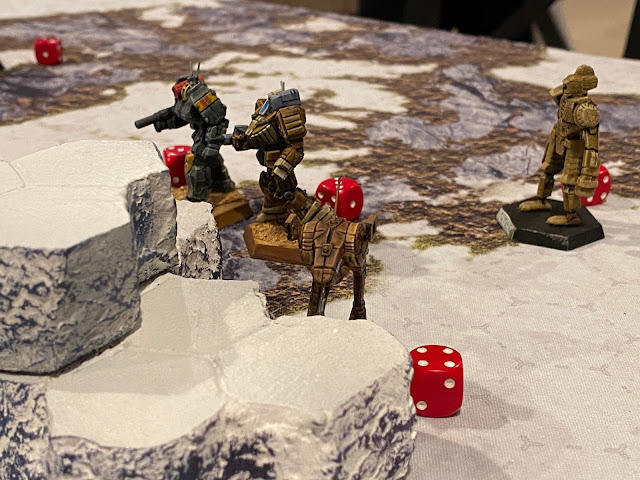 As the Lyrans pulled their defenses in tight to thwart the mercenaries' thrust, an 80 ton Zeus arrived from the southern end of the battlefield. Joined by the Lyran Thunderbolt, the two formidable mechs began swinging along the eastern edge of the battlefield. 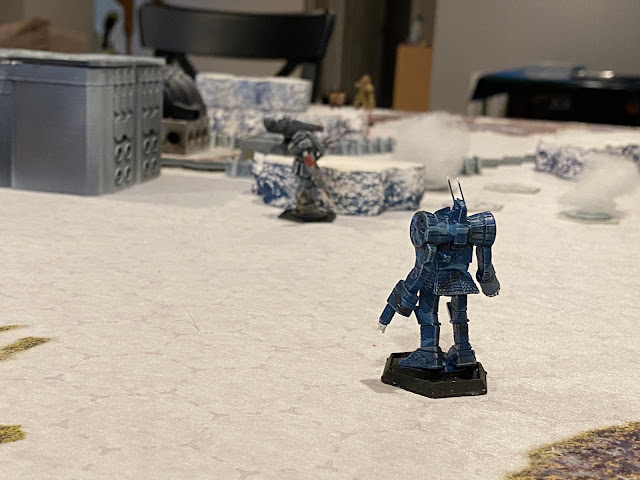 "Pepper, take Snag and Hoover beyond the ridge." Captain Razor radioed his favorite sergeant. "See if you can't draw those two heavy mechs towards you." 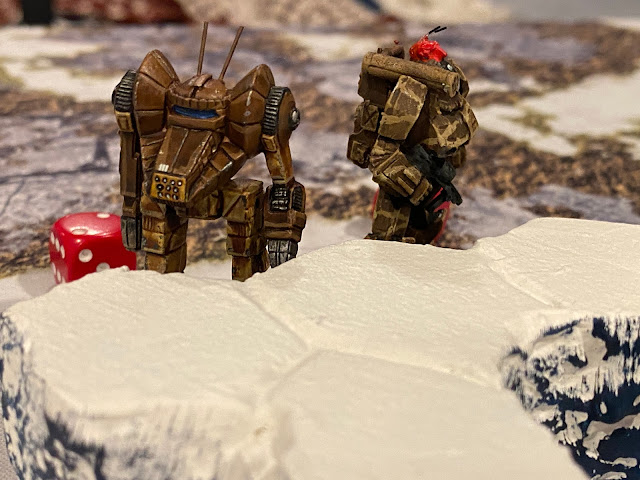 The trio of mercenary mechs laid down concentrated fire on the approaching heavy mechs. Angling to present their front armor to their foes, the two enemy mechs strode clear of surrounding cover into the ice fields to the east.

With a thunderous sonic boom, a Hellcat aerospace fighter broke through the cloud cover and laid down a devastating strafing attack on the rear armor of the approaching Lyran heavies. 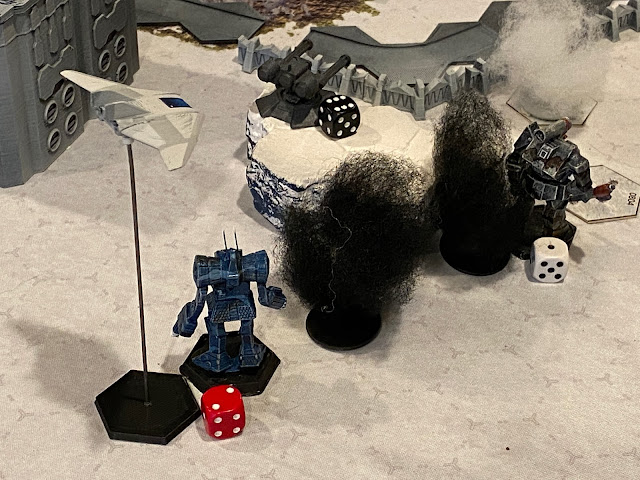 "Nice work Pepper, you set those two up perfectly for that airstrike. They aren't down yet though, so fall back to the north ridge."

In the center of the industrial complex the Lyran turrets and long range mechs kept the mercenaries pinned down behind cover. 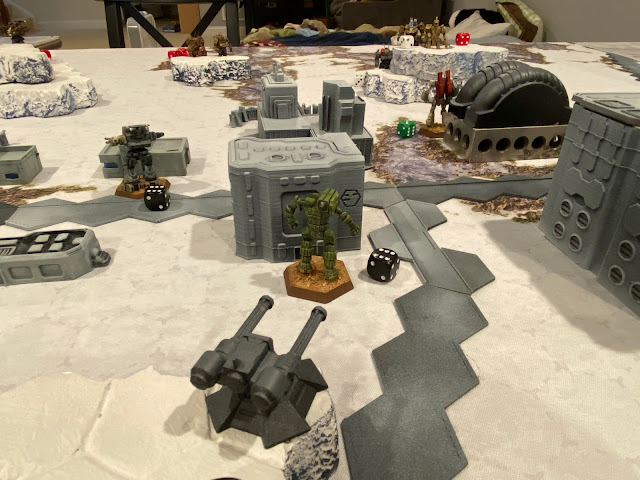 Using it's jump jets, the Lyran Phoenix Hawk began drawing closer, hoping to flush the attackers from out of their defensive positions. 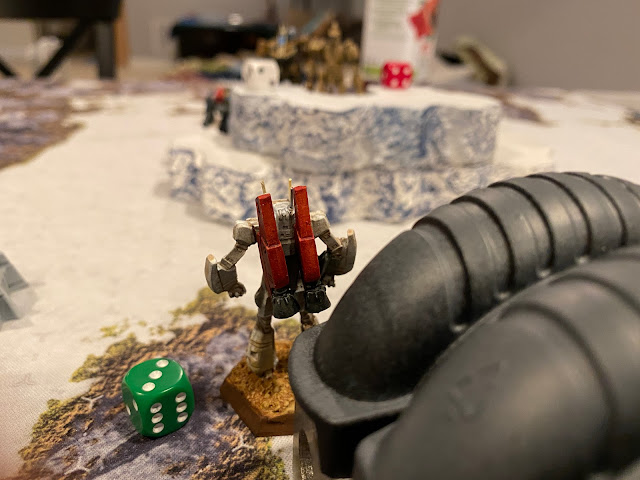 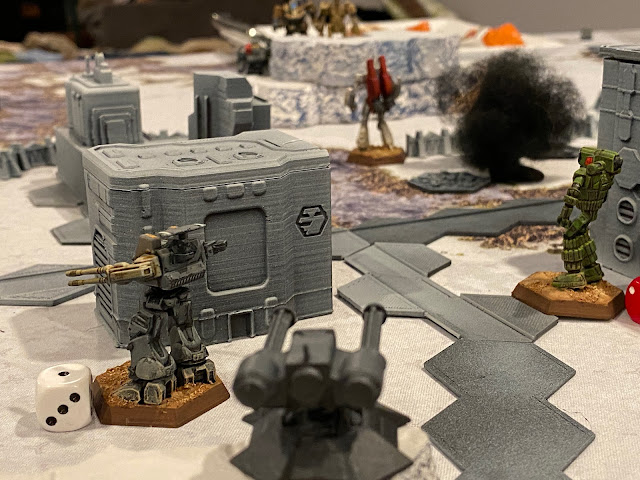 "Turrets are down." Captain Razor radioed the lances under his direct command. "Form up on me and head into the complex. We need to knock out their command and control center to clear the way for the commando team." 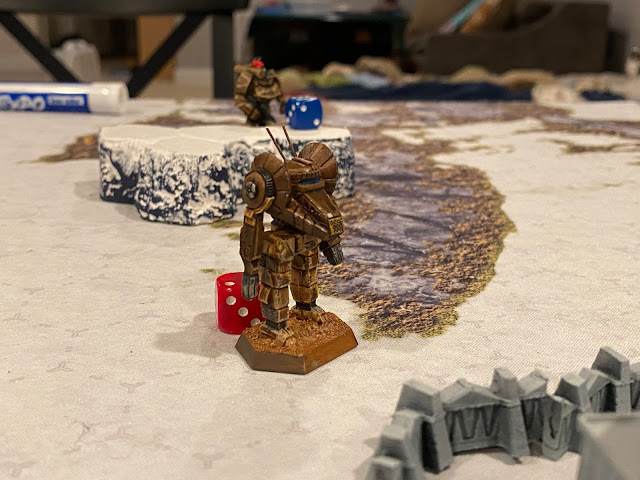 Leading the way in his Dragon heavy mech, Captain Razor's mercenary warriors closed within close range of the Lyran defenders. 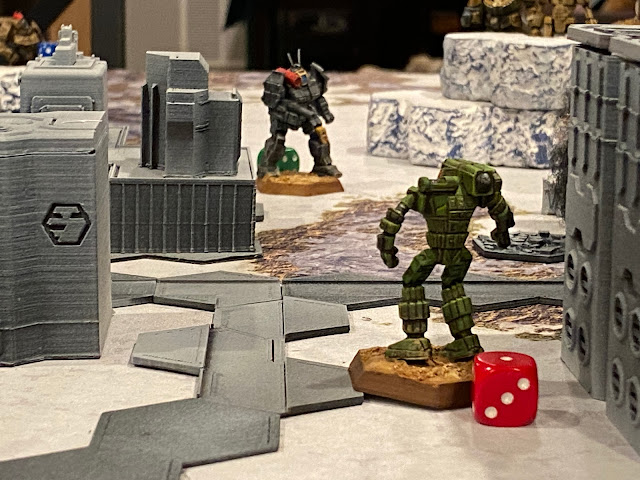 Dispensing with finely tuned scanning of the buildings to find the Lyran commanders, the mercenaries opted for the brute force tactic of bringing every structure down. Autocannons and lasers tore through the hardened bunkers of the complex. One by one each was reduced to rubble. 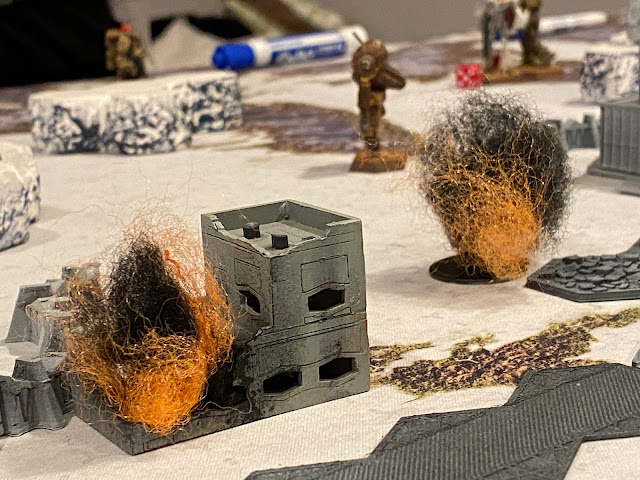 With only light return fire, and forced to maneuver in the close confines of the industrial zone, Lt. Snag found his Centurion face to face with the House Steiner Hunchback and its dreaded AC 20. 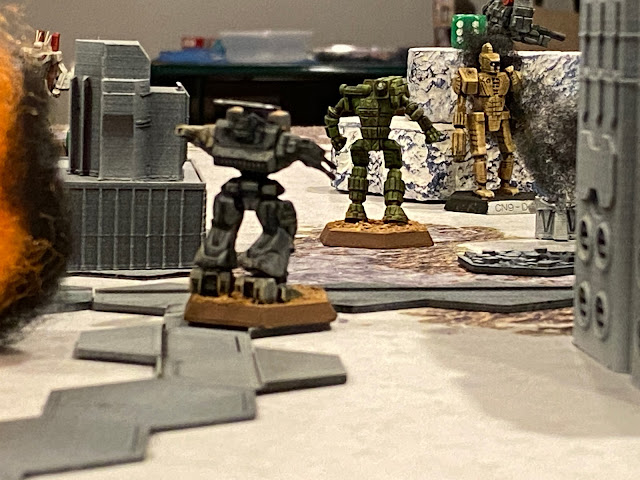 Backed up by the Lyran Rifelman the two mechs ripped the Centurion's torso armor apart, coring the mech in a single round. Riding a pillar of flame as his pilot's seat ejected, Snag's Centurion was the first casualty of the battle. 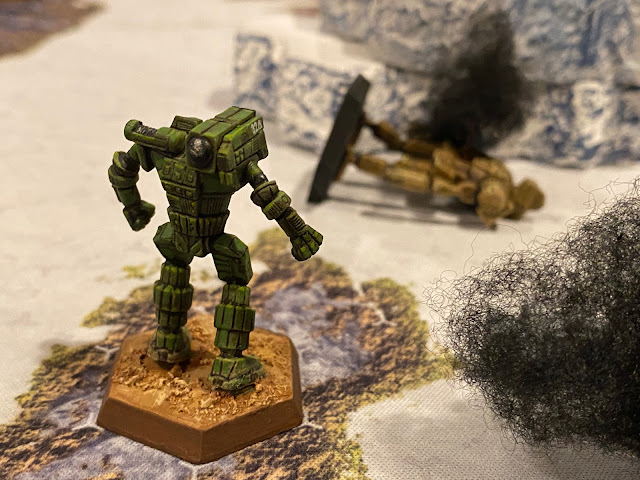 To the east, Sgt. Cooler throttled her Locust up into a run, Kiwi's Griffin trying to keep up the pace.

"Cap'n, I've got visual on the commandos. Those heavies are right on top of the approach." 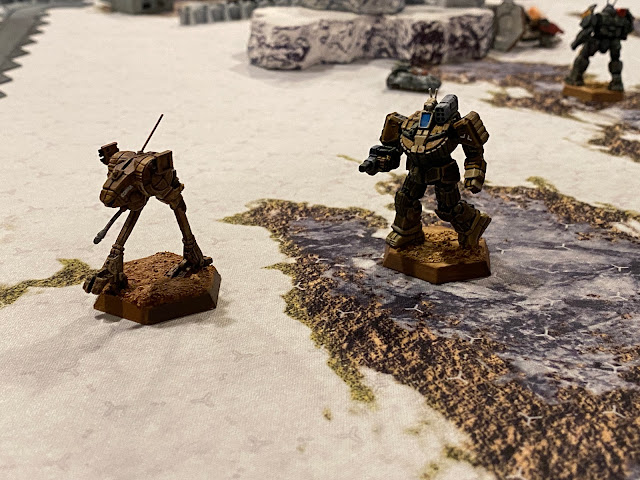 Darting around the flank of the approaching heavy mechs, Cooler's Locust raked the rear of the Lyran Thunderbolt. Her light machine guns pierced the heavy mech's internals, knocking out its SRM launcher. 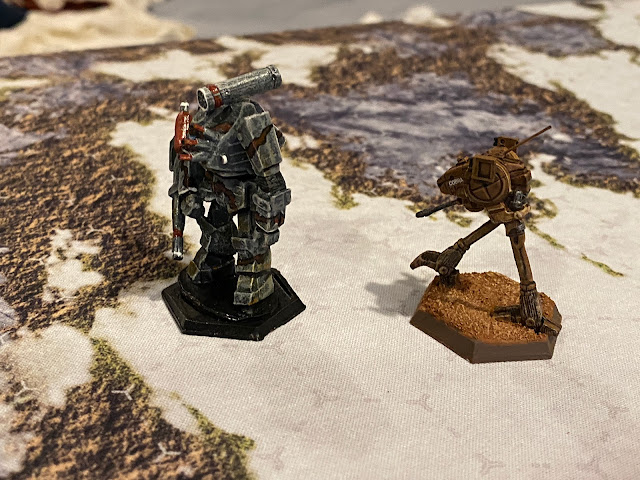 Skidding to a stop and then darting back behind the enemy Zeus, Cooler's Locust and Kiwi's Griffin fired on the assault mech from the rear. Distracted by their attack, the Zeus failed to score a hit on the Kurita APC that shot past them along the access road. 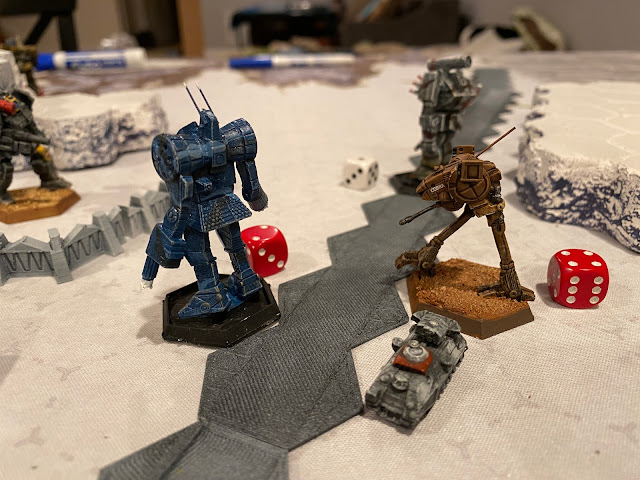 As the battle raged around them the Kurita commandos disembarked from the Packrat APC and rushed into the mech hangar. 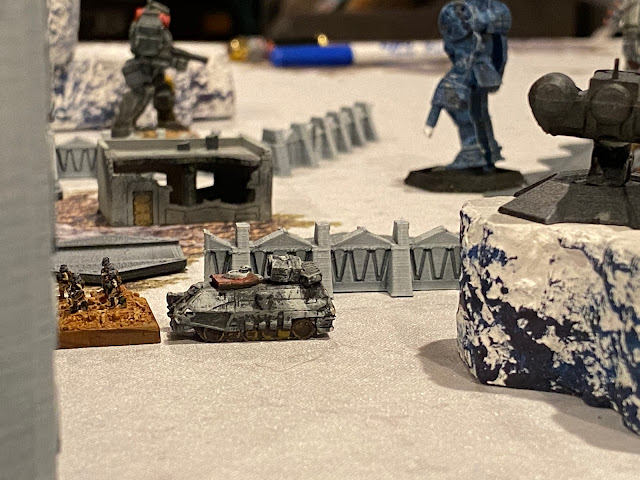 Near the center of town the Lyran Hunchback strode forward into a threatening position, the House Steiner Phoenix Hawk falling back towards it for protection. 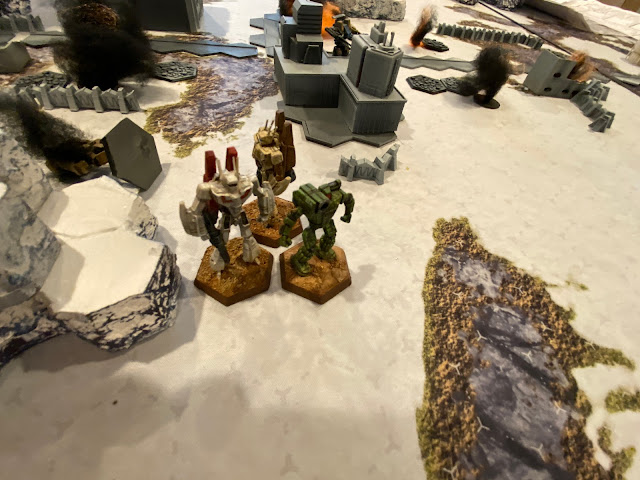 Having suffered concentrated fire to one its left leg, the Lyran Phoenix Hawk was doing its best to shield it from the approaching mechs from the east. Seizing the opportunity, Sgt. Maple kicked her own Phoenix Hawk's jumped jets and leapt into position behind the Hunchback. 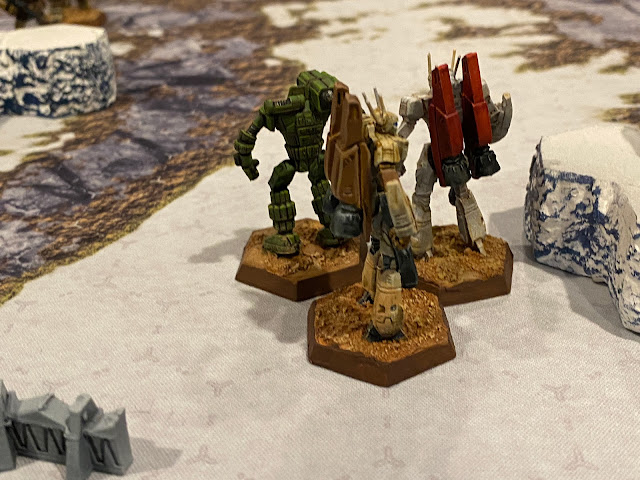 Unloading a stream of laser and machine fun fire Maple obliterated the last internal components holding the enemy mech's leg together. It crashed to the crowd in a gout of smoke and billowing powdery snow. 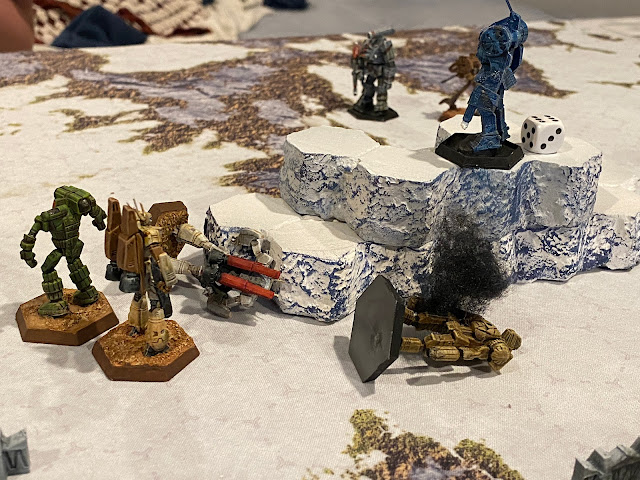 With the loss of the Phoenix Hawk, destruction of the generator, laser turrets and command bunker and with their heavy and assault mechs taking internal damage, the Lyran's signaled a retreat. 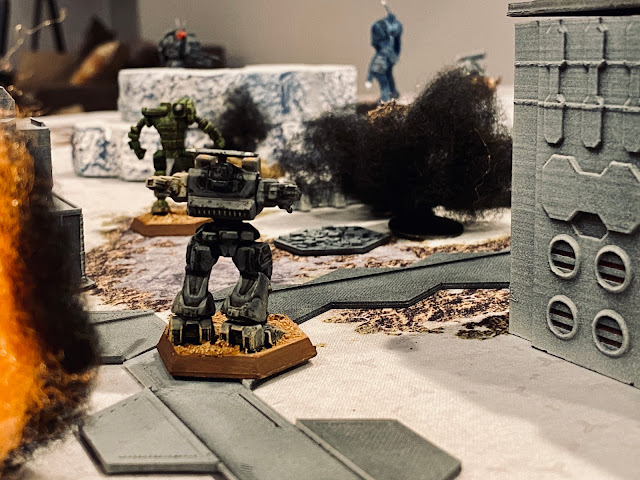 The battle to secure the factory complex was a victory for Razor's Raiders, but the fate of the dropzone still hung in the balance. Will the battle lance be able to secure the escape route for the mercenaries?

A fun game, but this climactic event is stretching Battletech to its limits. It's taking us multiple evenings to play out this grand company on company action, something probably better suited to Alpha Strike. Still, what better time to tie up the game table with a giant game than the forced quarantine we're all dealing with? Thank God for in-house opponents to play with!