I managed to finish of the first two groups of Wargames Factory Romans I've been working on this weekend.  I've never completed any mass, assembly style paint jobs on 28mm miniatures before so this was an interesting test of getting good results out of repetitive painting.  I can see room for improvement, but I'm fairly satisfied with these wargame level paint jobs.


When I was researching manufacturers and paint schemes for Romans I relied on other gamer's websites.  Scott Macphee's in depth review of the WGF Romans was particularly helpful. I thought I'd add on a few more comments and provide some comparison shots for anyone in the same boat.\ 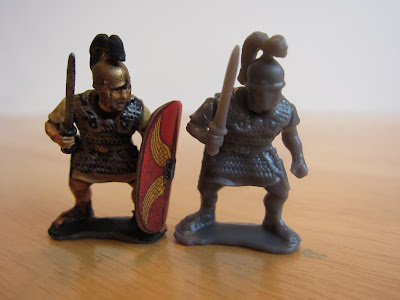 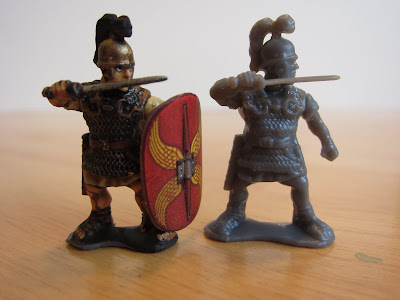 The box set comes with two styles of bodies (one crouching, one upright) and several varieties of arms (gladius at the ready, gladius upright, pilum preparing to throw and pilum upright).  There's also a single style of shield arm. Based on Scott Macphee's difficulties getting both the "gladius at the ready" to look right and the troops to rank up, I took care in positioning the arms. I found that the gladius at the ready only worked when it was stabbing over the top edge of the wielder's shield, which required the upright body. To help with the issues of ranking up, I positioned the shield arms with the hand as low as possible so that the shield was held close to the body.

While I was successful with the striking gladius poses turning out well, in my test positions of the finished legionnaires I'm  having trouble ranking them. I think it's going to take some finesse to get the multiple poses to rank up well.

Although the detail is soft on the infantry poses I thought they painted up well enough. There was enough detail present to pick up drybrushing on the armor, or to allow an Army Painter wash to flow around the raised areas of the flesh or tunic. On the other hand, the command figures were a bit rougher. 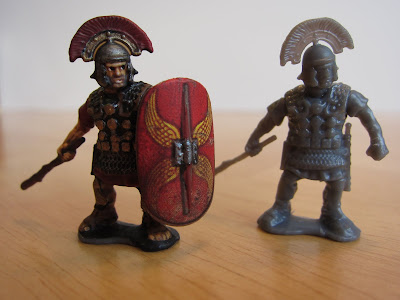 The centurion was the highlight of the command group, but the sculping on the single officer body seemed quite a bit "squattier" than the rest of the figures.

The only part that differentiates the optio from the centurion is the head, and sadly it's a step down. The optio's features are exaggerated into a cartoonish scowl. I gave it a quick highlight over the basecoat, picked out the eyes, gave a wash of blue/gray to imply stubble and filled in the gaping mouth with a bit of black.  I could've continued detailing the face but I didn't think the weak sculpt was worth it. 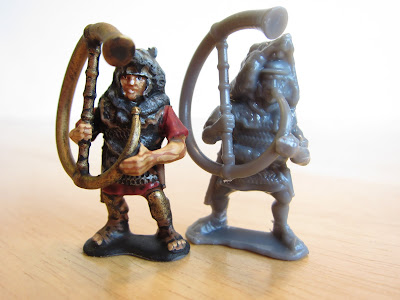 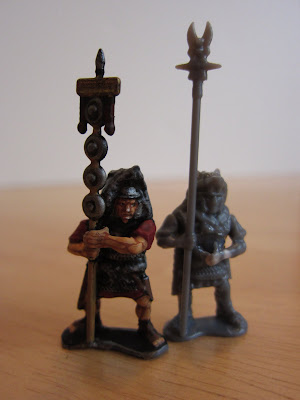 The cornicen and signifier are the weakest of the poses, primarily because of that weird left are with it's flipper like hand that doesn't quite fit with the other pieces of the figure. After struggling to get two of the signifers to hold their standards with both hands I think I'm going to switch to signifers holding the standard with one hand and a buckler in the other.  Having just started in the ancients period I don't have any on hand so I'll need to keep an eye out for an extra or create one from card.