After wrapping up our quick "Cavalry vs. Infantry" scenario, we had just enough time to run a second scenario. For our second match we chose "Ambush" from the classic Table Top Teasers. A quick report of a Celtic ambush of a Roman column after the jump.

Luckily, "Ambush" uses quite a bit of the same terrain as "Cavalry vs. Infantry", so we shifted our terrain features about and deployed the Roman column according to the scenario. Two Roman cohorts and Cretan archers closely escorted a Roman wagon, with a VIP standing in for the scenario's original princess. Two Numidian light cavalry elements took the very forward and rear positions. The Romans needed to march their wagon and VIP to the river ford, allowing them to escape to the north. 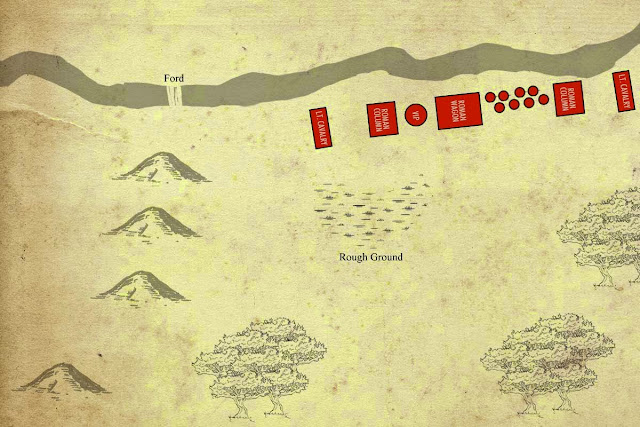 The Celts were slightly outnumbered (having a unit of slingers, a warband, a cavalry unit and a small unit of archers), but could deploy in any terrain feature. We modified the rules slightly from the original scenario, allowing any units in the rough ground or eastern forest to be detected on a roll of 5 or 6 as the Roman column was already close enough for scouts to spot them. Units in the other terrain feature would require a successful order to reveal themselves, with additional orders allowing them to move.

As for the wagon train and VIP, we decided they'd be captured after being contacted by an enemy unit (in hindsight, we should have used the stats for wagons in the Hail Caesar rules, but their existence slipped our minds at the time).

Since the Celts would be ambushing, my Roman opponent Mike let me have the first round. I revealed a warband in the rough ground, charged and contacted the wagon train.

For our second attempt we removed the rough terrain as an option for hiding troops, reset all the figures and started over.

The Celts Sound the Attack


Repositioned to give the Romans a fighting chance, the Celts let loose their bloodthirsty howls and emerged from the woods. The requirement of spending a single successful order forming up at the edge of the forests restricted the barbarians from charging the Romans while they were vulnerable. I didn't roll more than a single order for any of my troops, and actually failed to get my archers out of hiding.

The celt slingers were in range of the wagon train though and unleashed a fusillade of stones against their helpless latin foes.

Though spread thin, I was feeling confident that I had managed to surround my enemy and could prevent a simple flight to the ford (a real danger if the wagon or VIP rolled three successful orders). 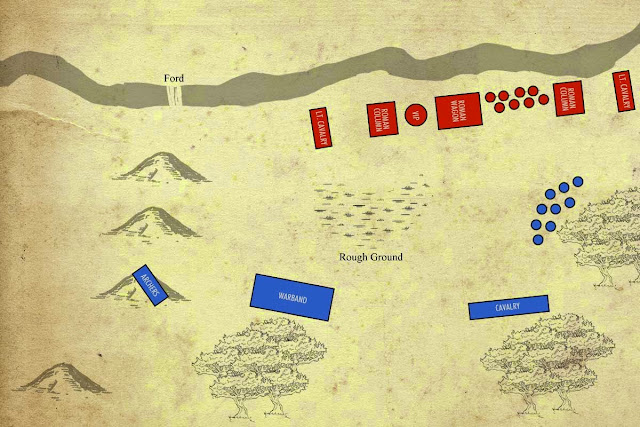 The Romans deployed into a defensive line, seeking to blunt the thrust of the cavalry and skirmishers who were poised to charge next turn. 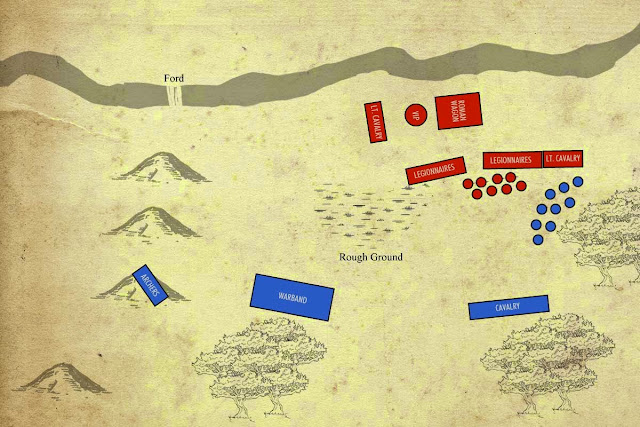 Close enough to unleash missile weapons, the Romans dealt and astounding amount of damage to the slingers who rolled a 3 on their subsequent break test and were wiped out.


My confidence began to waver. I had missed the opportunity to deal a large amount of damage with my smaller force while the Romans were still in their vulnerable column formation.

With the rough ground and great distance from my other forces protecting his flank, Mike's Romans were free to apply their full force to my cavalry. He moved one heavy infantry unit back, close to being broken after suffering under the initial attack by my slingers. As initiative passed back to me I decided to gamble everything on a charge to his center, with my general throwing his full weight into the battle. 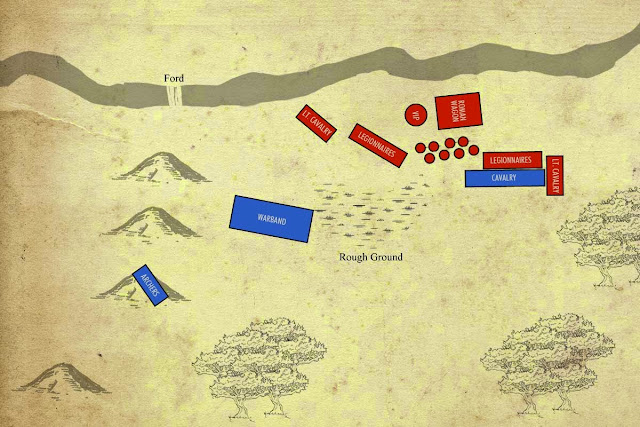 As I charged his infantry, Mike took advantage of the rule that allows formed cavalry to countercharge join the battle.


My cavalry managed to survive the initial battle, even being flanked. On the subsequent round, Mike's general also joined the fray. In the resulting bloodbath, my cavalry still managed to hold on but were broken, but my general met a glorious but tragic end.

With two units mauled, my general defeated and dinner time approaching we decided the Romans had staved off the Celtic ambush. The barbarian general was packed up and shipped back to Italy for his inevitable parade and execution during a triumph.


What Did We Learn?

Converting the Table Top Teasers to Hail Caesar requires a little bit more finesse than I think we initially appreciated. The variable move distance (varying between 0 and 18" for infantry for example) means that distance by itself can't be used to govern game length. The river ford and ambush positions feel extremely close in this scenario, potentially ending the game before it begins.

Allowing the wagon and VIP to use the stats (rather than being instantly captured upon contact) would have given them more resilience  and limiting them to single moves would have prevented them from skittering off the board on the first turn. 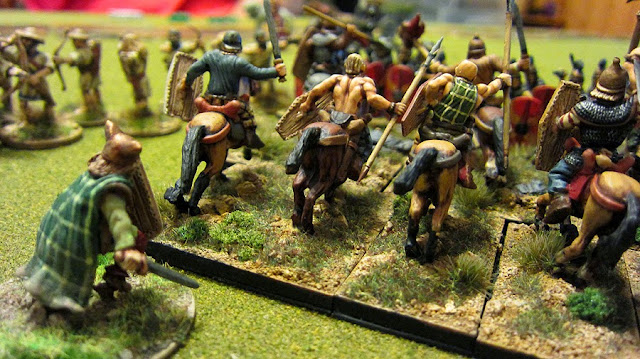 The ambushing forces are also purposely outnumbered in the scenario, but because they are spread out they can't take advantage of supporting each other, further weakening them. The Romans on the other hand can lock up into a defensible line, using the river and rough ground to protect their flanks.

I'll have to think on this a bit more, but giving the Celts only skirmishers and more terrain might allow them to strike and slip back before the heavier roman infantry can pursue. Even with equal forces, the Celts will take a beating if they get into a stand up fight with formed infantry, but could prove frustrating for the Roman player. After losing (yet again) I might not mind too much some Roman fuming!
Posted by John at 6:27 PM