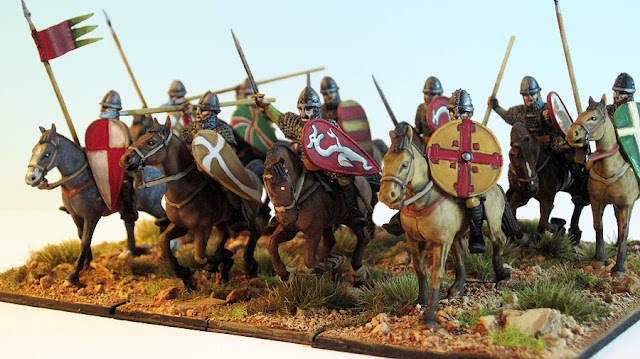 Over the last year I've painted up a few Vikings, a whole village of levy archers, and just now completed the Darth Vaders of the Dark Ages - a dozen Norman knights. It's hard for me to see the Normans as anything but bad guys. I'm not from the UK, and don't have any sort of emotional ties to any of the various post-Roman clans, but reading about the initial conquest by William the Bastard it was hard for me not to identify with the plucky Harold and his army of underdogs who fought off viking invaders and Harold's nutty brother before finally falling to the Norman invaders. The Normans don't seem to have acted like anything but thugs in their adventures in Italy and during their Crusades in the Middle East either.

I was eager to get some of these signature units painted up for SAGA or larger wargames. Conquest Miniatures' plastic Norman Cavalry set seemed an affordable way of getting these classic dark age knights on to the table. My thoughts and a review of Conquest's figures after the jump.


The sprues are full of variety. Most of the warriors are clothed in chain, but figures in quilted and heavy linen or leather tunics are included as well. Arms are separate, with the limbs molded as part of the back of shields, or holding weapons (spears and swords). A number of separate arms, shields and weapons are included to allow even more customization. There are 15 sets of riders and horses (a change from earlier packaging that provided 15 riders, but only 12 horses), but only a dozen kite shields. A number of round shields are included which I pressed into service rather trying to source alternates. A horse and rider casualty figure is included as well as horn, standard and wooden club (should you wish to model Bishop Odo as seen on the Bayeux tapestry.)


The horses are first rate, in my opinion. Dark age era horses were smaller and shaggier than modern breeds, so these models might be ahistorical, but the sculpting, detail and animation are so fine that I'm willing to overlook any anachronisms. They come with modeled with horse blankets, so could potentially be used to mount other riders.


The riders are decent. I was a bit disappointed in some of the facial detailing which is either obscured by the nasal protection of the Norman helms or simply very shallow and undefined on a few of the heads. On others the faces and expressions are quite clear, and en masse from a foot away they all look good.

The box also comes with enough Renendra bases to mount all of the horses. Rather than the more common 12 riders per cavalry unit, I decided to drop down to 10 riders, leaving 5 leftover. Combined with another box of Norman Cavalry I can get three 10 figure units from two boxes. All is well and good, but there aren't enough bases for three units among the two boxes. I picked up some extras on eBay UK

, and there are alternatives on the eBay US 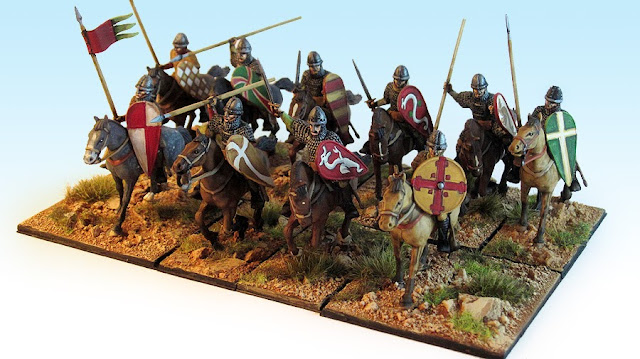 I found the shield arms tricky to implement. I prefer gluing the entire figure together, priming and painting it, and then applying the shield as the last step. Because the arm is integral to the shield, I had to modify that process a bit. I applied a bit of putty (blue-tac) to the socket of the rider's arm and to the shield arm's elbow before priming, so that I could later use plastic cement to attach the two pieces. I painted the riders and then lined up the shield arms for detailing the designs and emblems.

Once they were done, I removed the putty and then finished up by painting both sleeves at once
and gluing the shield arm in place. I was eager to get these wrapped up, so broke out all of my painting tricks to get each rider done quickly: drybrushing the armor, washes and highlights for the skin and shields, and block color plus dip for the clothing.

Overall I was pleased with Conquest Miniatures Norman Cavalry. The horses are especially nice and the riders are good. A lot of noise was made about the lack of central bosses when these figures were first released a year or two ago, but from my reading it seems that central bosses were common for kite shields, but not essential. I picked up another box at Historicon which might receive central bosses, but I think it might be more trouble than it's worth.