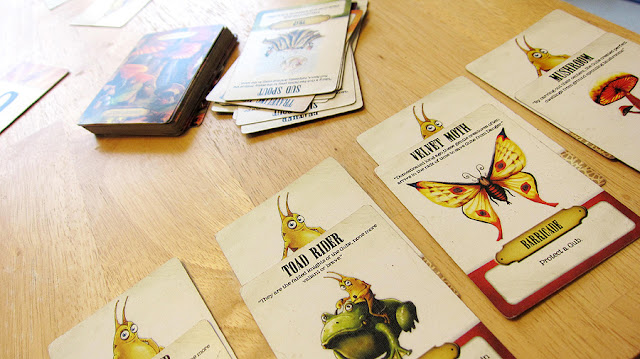 How do you transition a kid from the simple (but unchallenging) children's games like Candyland to something a little more substantial that the whole family can enjoy? I think I stumbled on to a great gateway game, completely by chance.

My son just turned five, and because we play a lot of games in our house he's acquired a decent collection of children's games. Candyland was great when he was two to teach him the concept of a game, and while he was thrilled with Chicken Cha Cha Cha

, they didn't quite have the tactical complexity I look for in a game.

During our recent pack and move we unearthed a mint copy of Gubs, a game I had picked up from Barnes and Noble the previous Christmas for about 10 bucks and kept on hand as a back-up present in case we needed to fill out a visitor's stocking or provide an impromptu gift. With most of his toys and games packed up, we decided to give Gubs a try, hoping to eek out even 30 minutes of entertainment from it. I was surprised to find that it turned out to be a great little game and taught some important concepts I know we'll be able to build on in the future. A complete review of this little gem after the jump.

I won't go through a complete run down of the rules (they are available online), but in short, each player receives a hand and draws from a common deck of cards. On their turn they may play one or more Gub creatures from their hand or play cards that protect, steal, kill or otherwise alter the Gubs currently in play. There are three letter cards ("G", "U", and "B") in the deck that are played immediately when drawn. Once all three letters are out of the deck the game is over and players score one point for each Gub they currently control. This doesn't sound too revolutionary, so why was I so taken with it?
Now don't get me wrong, Gubs is not a deep, strategic knife fight in card form. It's a light game, a bit of fun to pass the time while dinner is cooking, but I think it sets up a number of important concepts for kids, and it's fun to boot. I know my son loves playing, and has continued to ask to play regularly since we first tried the game a month ago. My wife took it to school to give her high school students something to do on the last few days before summer vacation and they enjoyed it so much they asked to borrow it to take to their classes and lunch throughout the day. I've found Gubs

has proven to be a fun little game new or non-gamers enjoy.