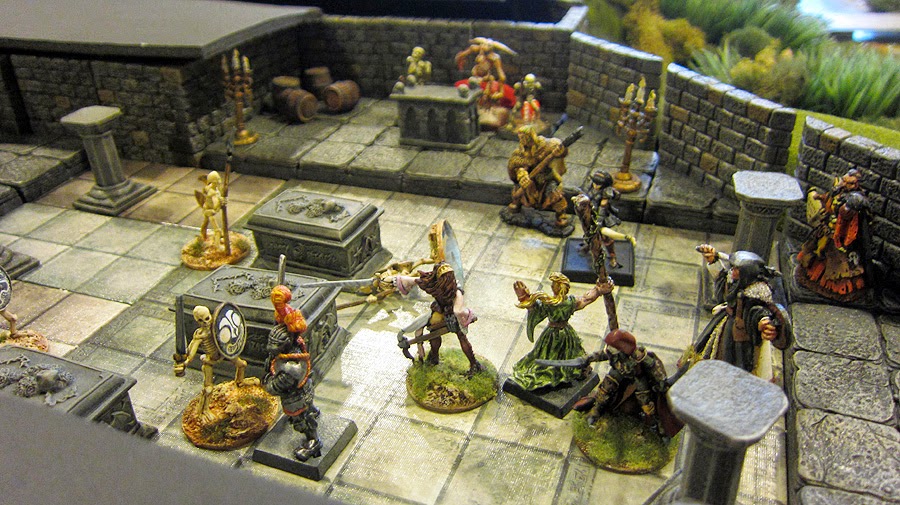 My wife and I hosted a full day of gaming out our house this weekend. She handled the Just Dance tournament while I ran a dungeon crawl for eight players. I wanted to capture the fun of smashing monsters, gathering loot and leveling up from hopeful adventurer to epic world shaker, all in four hours. Check out the fantasy saga after the jump.

I adapted the second edition Dungeons and Dragons Miniatures rules, but during playtesting realized I needed to make a lot of tweaks to cards and abilities to pull off the type of game I was looking to run. I created custom monsters and items, and each of the eight classes had stats that improved over four "levels" (Adventurer, Hero, Champion and Epic). 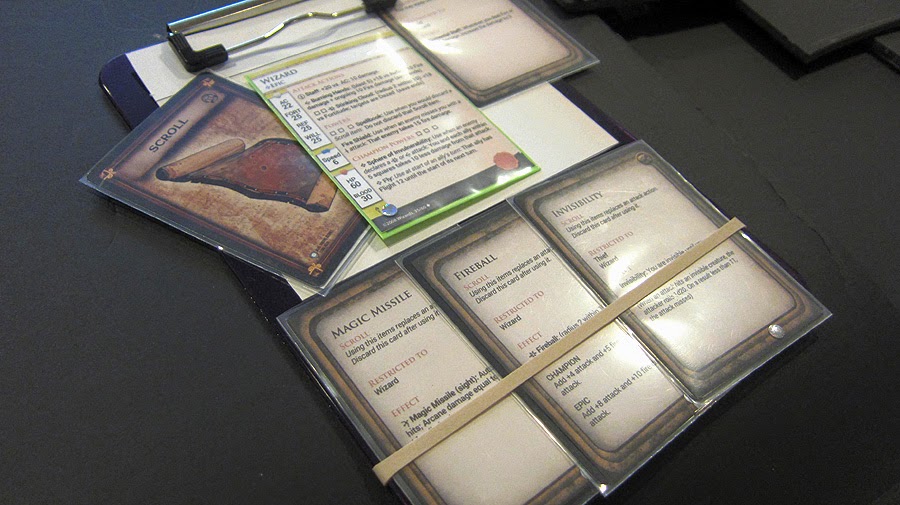 and clip boards kept everything straight (all a huge help when I actually got to running the game).

Each player got to pick a figure and matching stat card. The party was assembled to infiltrate a ruined temple and stop the evil cultists from finishing a ritual that would summon an elder demigod from the netherworld. Standard stuff. 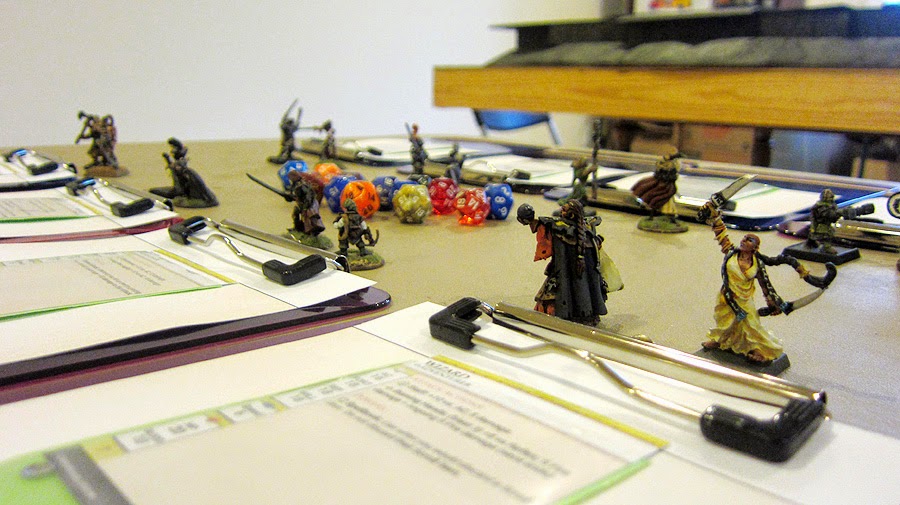 They quickly cut down the mercenary goblins in the ruined courtyard...


but as they were looting the goblin camp, an evil warlord and his giant scorpion pet emerged from the temple entrance to do battle. 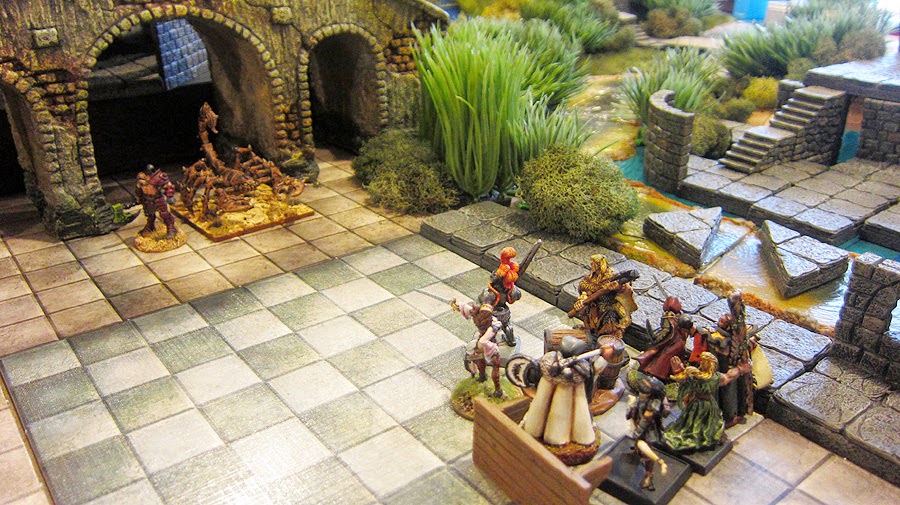 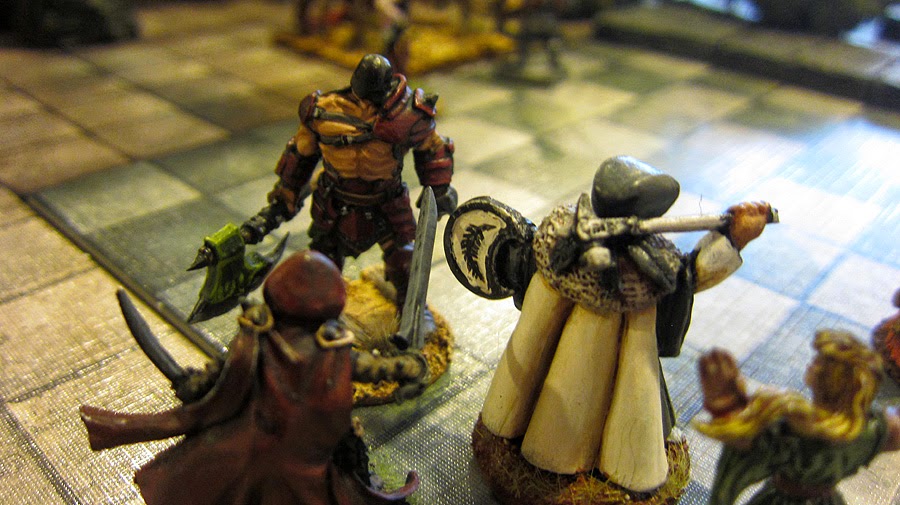 The overwhelming numbers of the heroes laid the warlord to rest and the group were forced to make a choice. They could enter the temple through the main entrance and pass through the temple crypts, or they could venture into the swamps and enter a secret back door.

They chose the swamps, but as they entered the mire they roused a tribe of lizardmen who grabbed their stone spears and charged into battle. 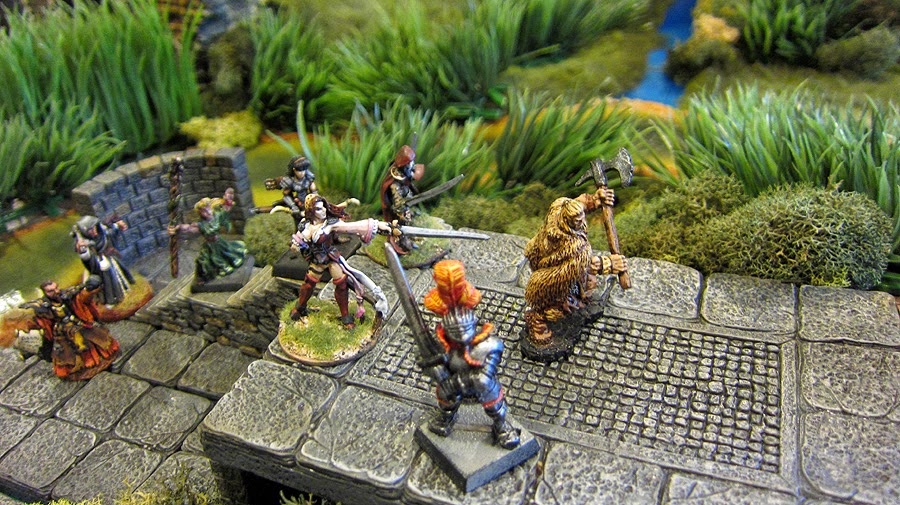 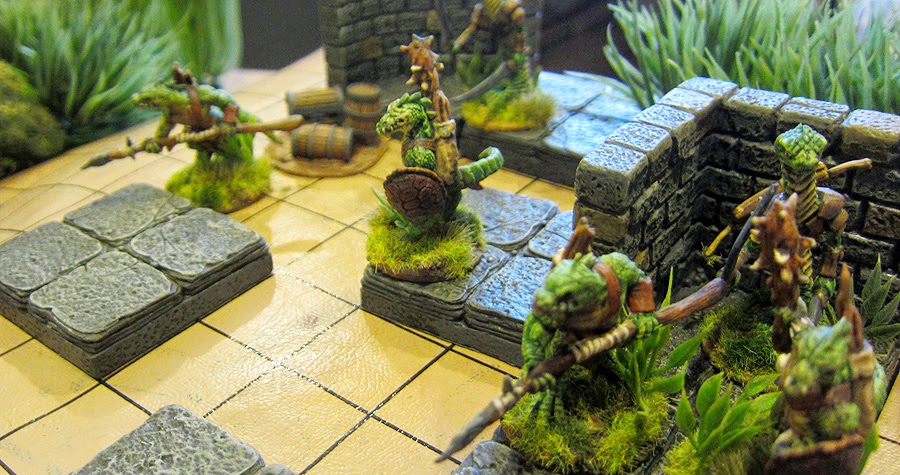 Emerging victorious the group crossed the river and approached the secret entrance... 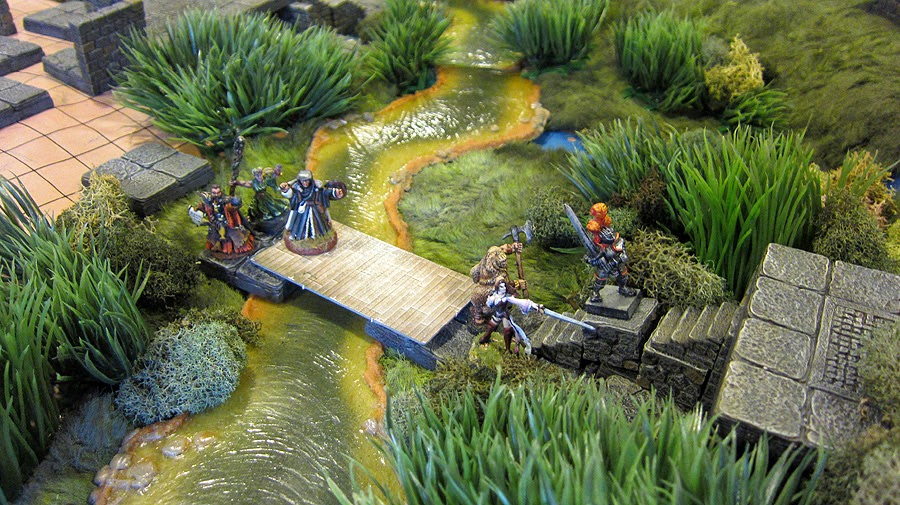 where the scouts discovered a sleeping dragon guarding the back door to the temple.

Beating a hasty retreat, the group tried the main temple entrance, encountering a horde of skeletons rising from their tombs. 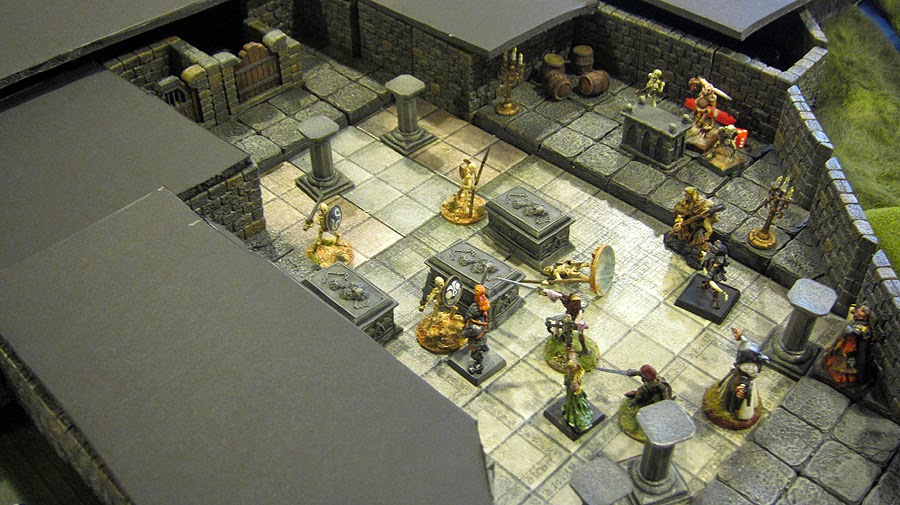 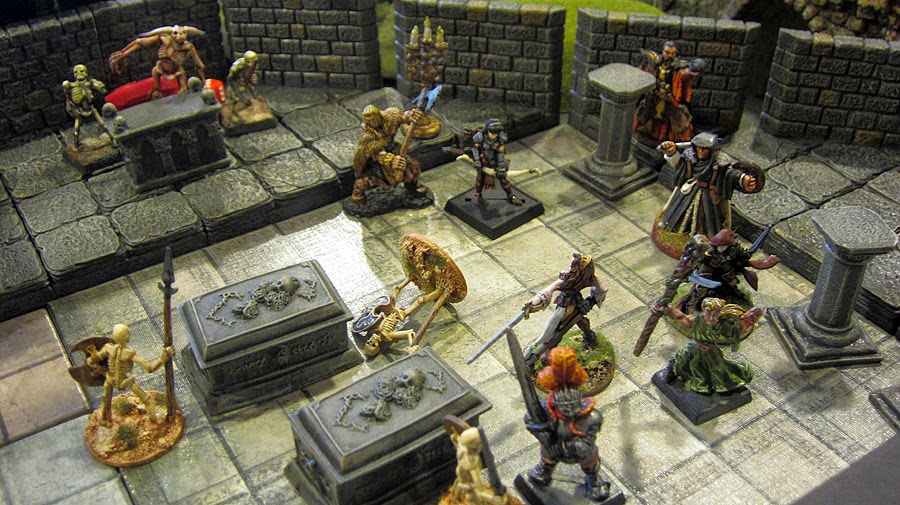 Despite bashing the bones to bits, the part found a death knight and his zombie minions lairing in the next chamber. 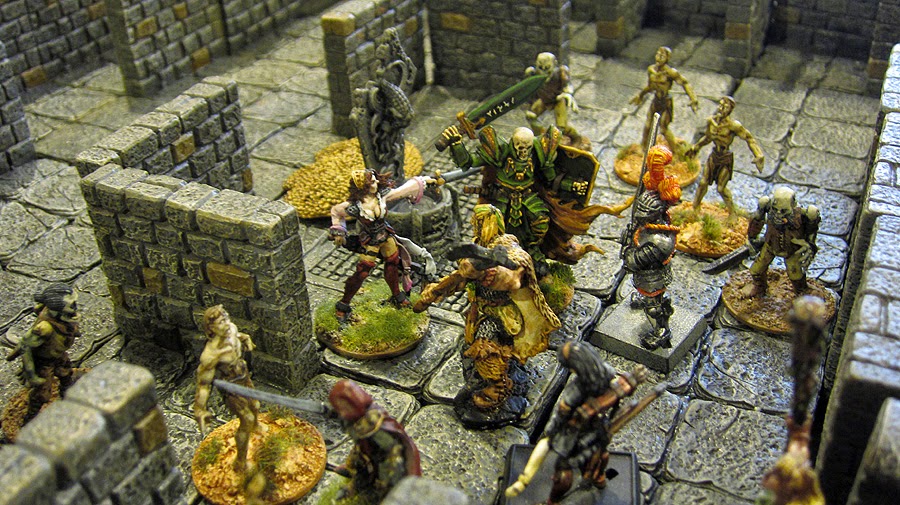 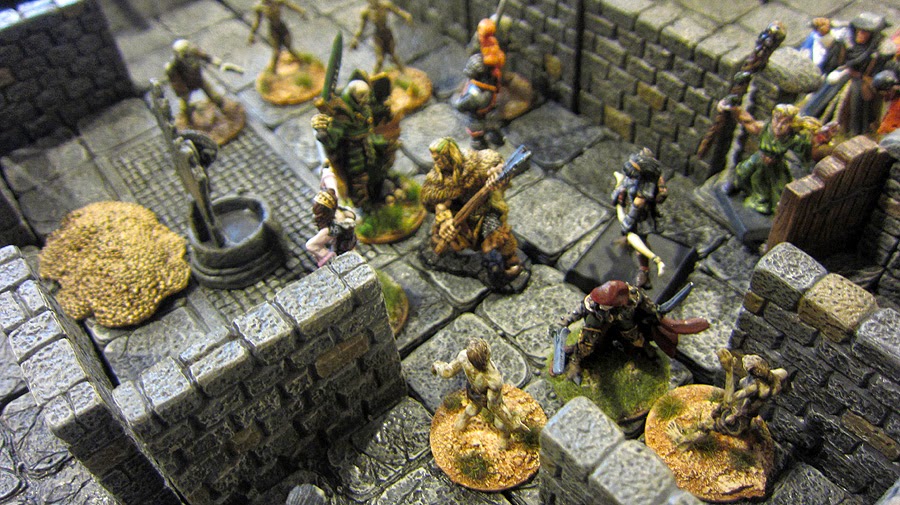 Defeating the death knight, the party entered the next chamber, the domain of a wizard and his flesh golem minions. A three front battle broke out across multiple levels, complicated by a teleportation circle.

The party entered the final room, a cavern at the heart of the temple. Evil cultists ringed a crevasse under the direction of their mind flayer overlords. 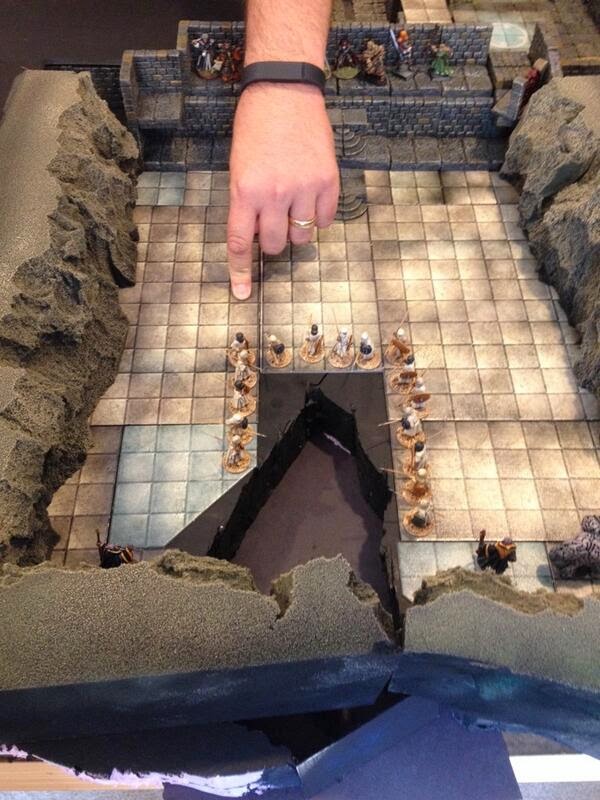 Horror! Despite their efforts, the great elder demigod of the cultists had been roused! 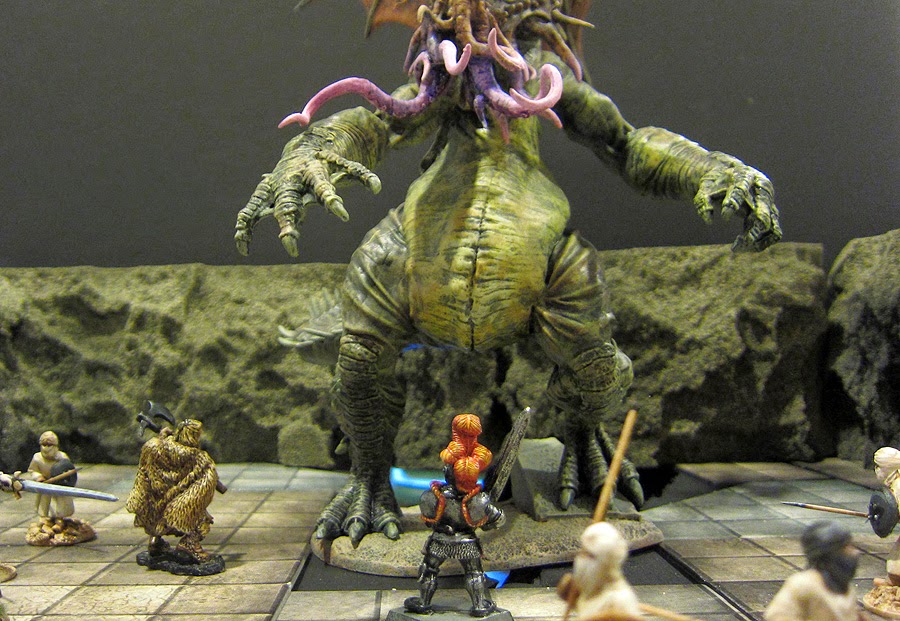 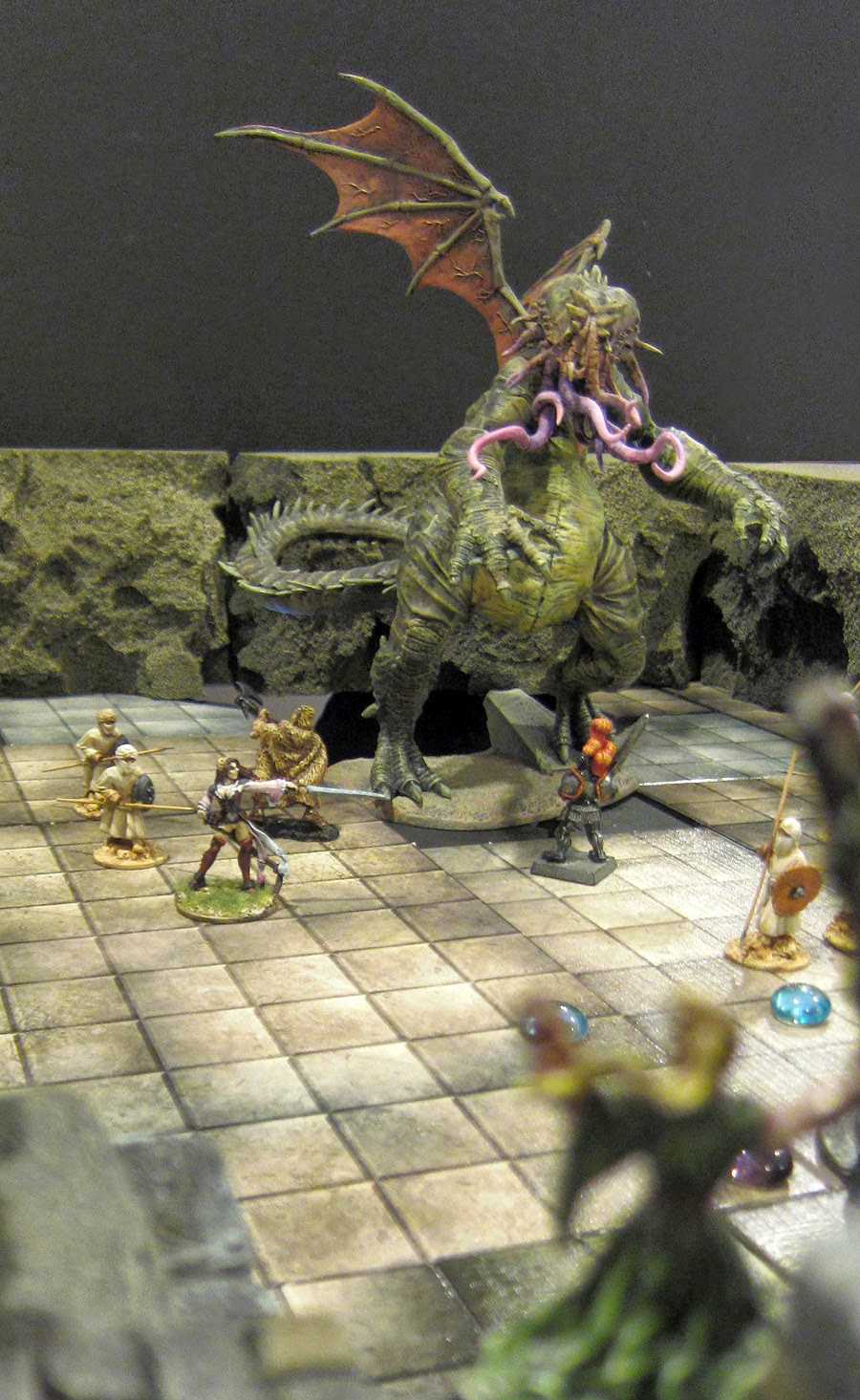 He rose from the chasm to do battle with the party but with the full power of eight epic level foes he lasted only a mere two rounds. A bit anticlimactic but in the end the game seemed to have been a hit, especially for the kids who had never played a dungeon bash before.

I had a blast, and looking forward to running another mass delve in the future.
Posted by John at 11:59 AM