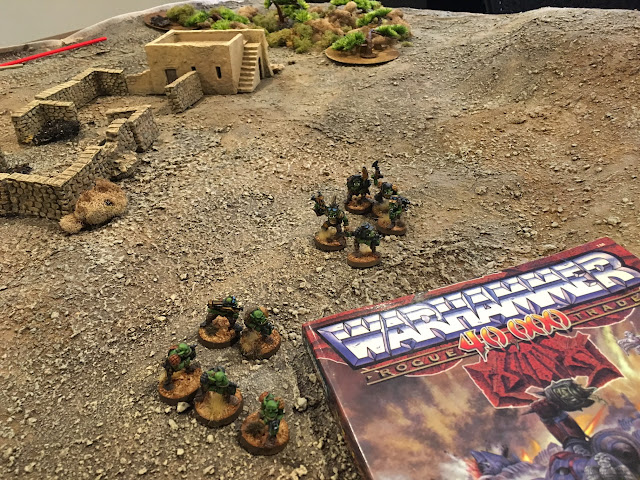 I was jumping the gun a bit, having only had a brief read of the rules and putting the figures I had on hand into play rather than following the scenario to the letter. My opponent for this outing was my 7 year old son, who had recently completed painting some old plastic Space Orks and would be fielding them along with orks from my own collection. To keep things moving smoothly I simplified the game a touch, removing a few of the special weapons and named characters.


Thrugg and his Space Ork Raiders

With only a handful of space orks available we reversed the scenario. The orks would be defending the farm from a counterattack mounted by the human Imperial Guard under the command of my son.

Captain Cranch and his Imperial Guard

Attacking the vile space orks were the heroic Imperial Guard, bringing a heavy bolter and flamer to the battle. I didn't bother totaling up point values, but surely brave humans would crush the aliens and drive them from the field.

The space orks were holed up in a bombed out farmstead (perhaps having driven off some Space Marines in an earlier exchange?). Their commander Thrugg lounged atop the farm's roof, swilling grog with the boyz. In the farm yard a small squad of boyz kept watch, training their heavy bolter on a far ridge. A final squad of axe bearing orks milled about the rear entrance to the farm yard.

Captain Cranch commanded a large squad that intended to skirt the deployment zone, heading for a patch of woods, from which they could launch an assault on the farm.  The Captain split the rest of his men into two small squads (including the heavy bolter) which would provide covering fire from the ridge. IT WAS A FLAWLESS PLAN.

Captain Cranch and his squad started their hike towards the orchard, while the other half of the attack force, dragging the heavy bolter to the top of the ridge, overlooking the clear field of fire towards the farm. I was pretty sure they were out of range, and checking with my tape measure found they were 70 inches away. With my forces out of range or behind cover, initiative passed to my son. 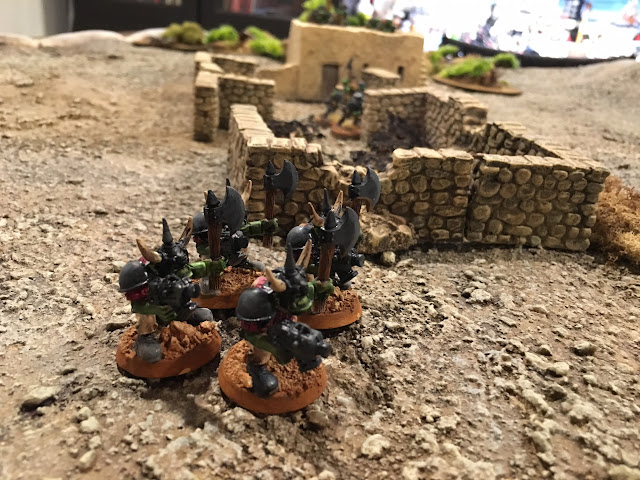 My son raced his axe armed orks out the rear of the farm and then turned to his heavy bolter armed ork. "Dad, my heavy bolter can shoot 40 inches, I can hit those guys right?" "No pal, I measured and they are 70.... centimeters away." My tape measure has imperial units on one side and metric on the other. In my haste I had used the wrong side. Of course, measuring using 'murican distances (instead of fake, commie metric units), his heavy bolter was well within range.

The Cap'n and his crew continued their slog under cover towards the orchard. If the heavy bolter could keep the space orks pinned within the farm, they might have a chance. 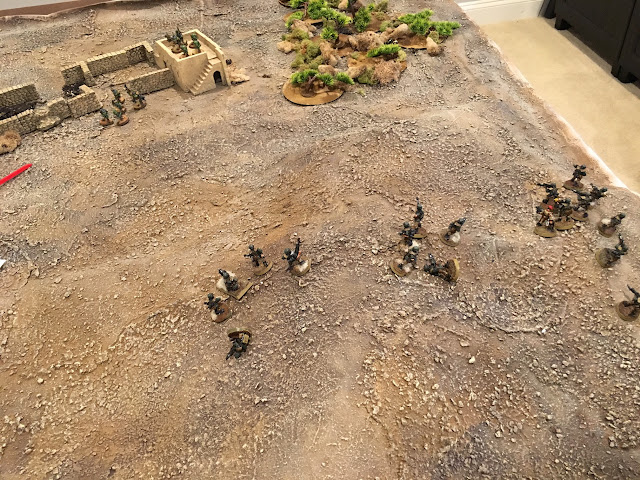 The humans pored fire on the farm from their positions on the ridge, but even the orks in the open seemed immune to the laser fire. The orks meandered out into the open heedless of the inconvenience of the brightly flashing lights the humans pointed at them, and opened up with loud, smoking, cracking bolter fire.

With the exposed human force now nearly wiped out, the orks brazenly loped forward, preparing to counter the Captain's thrust towards the woods.

The remaining human soldiers managed to make into the cover of the orchard. They began redeploying and dressing their ranks, ready to deliver a crushing blow to the wretched greenskins.


My son double marched his axe wielding orks round the far side of the farm. They were his only unit that hadn't fired yet. "Ugh! This is frustrating! I want these guys to fight!"  "Don't be too eager to get them into battle," I chuckled, "It's pretty common for a freshly painted unit to get slaughtered on their first time on the table." 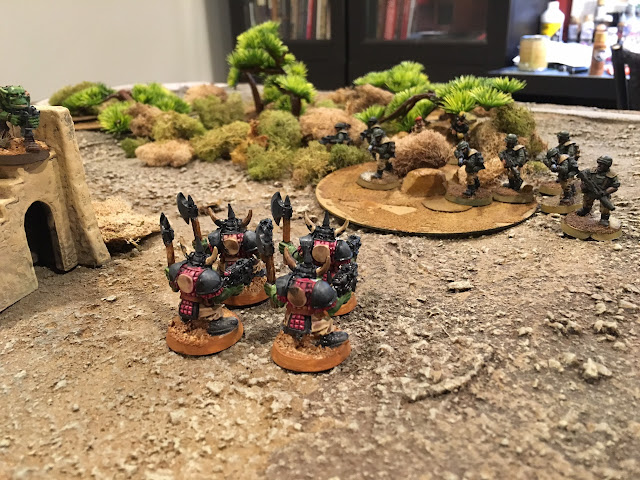 With dense woods dividing our forces, we each moved our units into position to attack. The humans blasted with their lasguns, but Thrugg and 'iz ladz only chortled as the pretty pink lights ricocheted off the superior hard cover provided by the farmhouse. 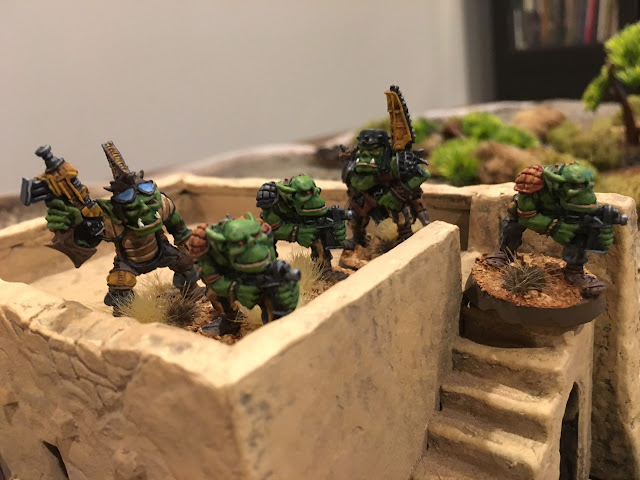 The orks returned fire, the heavy bolter spitting explosive shells into the orchard. Wood splintered, ripe fruits exploded like bursting skulls (and vice versa), and men shrieked as they were cut down. When the smoke cleared Captain Cranch surveyed the situation. "Allright lads, good show. I think we've located the enemy, let's off to HQ and report their position and get a curry."

The remaining humans fled the woods, routing towards their base edge. They managed to collect themselves but were forced to spend their next round gathering their wits, wiping the sweat from their brows and changing their undergarments. So preoccupied, they failed to notice the quartet of bloodthirsty, axe wielding horn helmed wierdos sneaking up on them.


Caught in the open, the orks fell upon the remaining humans. Capn' Cranch went down swinging... wildly, failing to down even a single ork.

As masters of the field the orks collected some of the freshly fallen orchard fruit and retired to a bonfire at the farm to celebrate their victory. 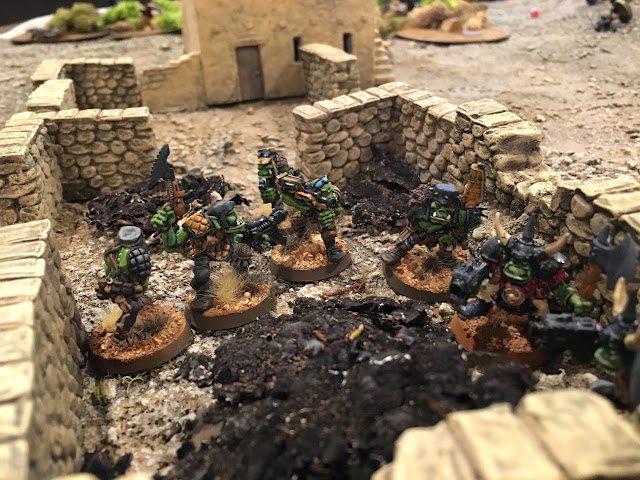 And that was that! I've played a few games of 40K over the years, but they were always interminable slogs, with dozens and dozens of figures and tanks and walkers on each side where each side simply rushed each other and yet the whole game took forever to resolve. I didn't enjoy them.

But this was totally different. My son didn't know the rules, and I was very rusty, but the basic combat resolution was simple, and keeping the number of figures and special rules per side limited let this game just fly. I think we finished within an hour. Even though I got absolutely slaughtered, I still had lots of fun as did my boy.

We obviously have a lot to learn, but we're looking forward to another game soon!